Dupixent: 7 things you should know

Dupixent is an injection that is usually given under the skin every other week for the treatment of asthma, eczema, or nasal polyps. Injection site reactions and eye conditions are the most common side effects reported and, unlike several other biologics, the risk of infection is low.

Medicines that interact with Dupixent may either decrease its effect, affect how long it works for, increase side effects, or have less of an effect when taken with Dupixent. An interaction between two medications does not always mean that you must stop taking one of the medications; however, sometimes it does. Speak to your doctor about how drug interactions should be managed.

Common medications that may interact with Dupixent include:

There is a potential for any medication that is metabolized by CYP450 enzymes, particularly those with a narrow therapeutic index (such as cyclosporine or warfarin) to interact with Dupixent. This is because the formation of CYP450 enzymes can be altered by increased levels of certain cytokines (such as IL-13) during chronic inflammation. Because Dupixent stops IL-4 and IL-13 from interacting with their receptors, this could normalize the formation of CYP450 enzymes. Monitor for any change in effect and consider any dosage modification.

Note that this list is not all-inclusive and includes only common medications that may interact with Dupixent. You should refer to the prescribing information for Dupixent for a complete list of interactions.

Remember, keep this and all other medicines out of the reach of children, never share your medicines with others, and use Dupixent only for the indication prescribed. 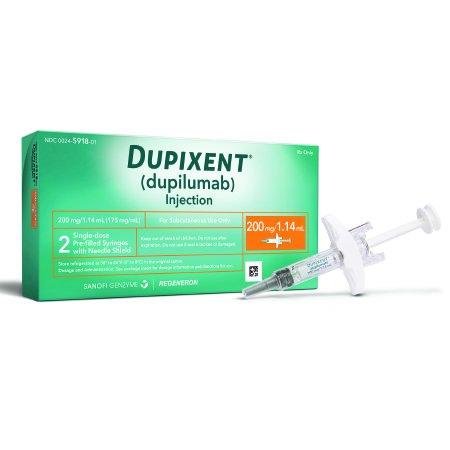