The empirical formula is C13H22N4O3S•HCl, representing a molecular weight of 350.87.
Ranitidine HCl is a white to pale yellow, granular substance that is soluble in water. It has a slightly bitter taste and sulfur like odor.

Absorption: Ranitidine Tablets, USP is 50% absorbed after oral administration, compared to an intravenous (IV) injection with mean peak levels of 440 to 545 ng/mL occurring 2 to 3hours after a 150-mg dose. Absorption is not significantly impaired by the administration of food or antacids. Propantheline slightly delays and increases peak blood levels of ranitidine, probably by delaying gastric emptying and transit time. In one study, simultaneous administration of high-potency antacid (150 mmol) in fasting subjects has been reported to decrease the absorption of Ranitidine Tablets, USP.
Distribution: The volume of distribution is about 1.4L/Kg. Serum protein binding averages 15 %.
Metabolism: In humans, the N-oxide is the principal metabolite in the urine; however, this amounts to <4% of the dose. Other metabolites are the S-oxide (1%) and the desmethyl ranitidine (1%). The remainder of the administered dose is found in the stool. Studies in patients with hepatic dysfunction (compensated cirrhosis) indicate that there are minor, but clinically insignificant, alterations in ranitidine half-life, distribution, clearance, and bioavailability.
Excretion: The principal route of excretion is the urine, with approximately 30% of the orally administered dose collected in the urine as unchanged drug in 24 hours. Renal clearance is about 410 mL/min, indicating active tubular excretion. The elimination half-life is 2.5 to 3 hours. Four patients with clinically significant renal function impairment (creatinine clearance 25 to 35 mL/min) administered 50 mg of ranitidine intravenously had an average plasma half-life of 4.8 hours, a ranitidine clearance of 29 mL/min, and a volume of distribution of 1.76L/Kg. In general, these parameters appear to be altered in proportion to creatinine clearance (see DOSAGE AND ADMINISTRATION).
Geriatrics: The plasma half-life is prolonged and total clearance is reduced in the elderly population due to a decrease in renal function. The elimination half-life is 3 to 4 hours. Peak levels average 526 ng/mL following a 150-mg twice-daily dose and occur in about 3 hours (see PRECAUTIONS: Geriatric Use and DOSAGE AND ADMINISTRATION: Dosage Adjustment for Patients with Impaired Renal Function).
Pediatrics: There are no significant differences in the pharmacokinetic parameter values for ranitidine in pediatric patients (from 1 month up to 16 years of age) and healthy adults when correction is made for body weight. The average bioavailability of ranitidine given orally to pediatric patients is 48%, which is comparable to the bioavailability of ranitidine in the adult population. All other pharmacokinetic parameters values (t1/2, Vd, and CL) are similar to those observed with intravenous ranitidine use in pediatric patients. Estimates of Cmax and Tmax are displayed in Table 1.

Plasma clearance measured in 2 neonatal patients (less than 1 month of age) was considerably lower (3 mL/min/Kg) than children or adults and is likely due to reduced renal function observed in this population (see PRECAUTIONS: Pediatric Use and DOSAGE AND ADMINISTRATION: Pediatric Use)

2. Effects on Other Gastrointestinal Secretions:

Pepsin: Oral Ranitidine Tablets, USP does not affect pepsin secretion. Total pepsin output is reduced in proportion to the decrease in volume of gastric juice.

Serum Gastrin: Ranitidine Tablets, USP has little or no effect on fasting or postprandial serum gastrin.

Active Duodenal Ulcer: In a multicentre, double-blind, controlled, US study of endoscopically diagnosed duodenal ulcers, earlier healing was seen in the patients treated with Ranitidine Tablets, USP as shown in Table 3.

*All patients were permitted antacids as needed for relief of pain.

In these studies, patients treated with Ranitidine Tablets, USP reported a reduction in both daytime and nocturnal pain, and they also consumed less antacid than the placebo-treated patients.

Studies have been limited to short-term treatment of acute duodenal ulcer. Patients whose ulcers healed during therapy had recurrences of ulcers at the usual rates.

Maintenance Therapy in Duodenal Ulcer: Ranitidine has been found to be effective as maintenance therapy for patients following healing of acute duodenal ulcers. In 2 independent, double-blind, multicentre, controlled trials, the number of duodenal ulcers observed was significantly less in patients treated with Ranitidine Tablets, USP (150 mg at bedtime) than in patients treated with placebo over a 12-month period.

As with other H2-antagonists, the factors responsible for the significant reduction in the prevalence of duodenal ulcers include prevention of recurrence of ulcers, more rapid healing of ulcers that may occur during maintenance therapy, or both.

Gastric Ulcer: In a multicentre, double-blind, controlled, US study of endoscopically diagnosed gastric ulcers, earlier healing was seen in the patients treated with Ranitidine Tablets, USP as shown in Table 6.

* All patients were permitted antacids as needed for relief of pain.

Pathological Hypersecretory Conditions (such as Zollinger-Ellison syndrome): Ranitidine Tablets, USP inhibits gastric acid secretion and reduces occurrence of diarrhea, anorexia, and pain in patients with pathological hypersecretion associated with Zollinger-Ellison syndrome, systemic mastocytosis, and other pathological hypersecretory conditions (e.g., postoperative, short-gut syndrome, idiopathic). Use of Ranitidine Tablets, USP was followed by healing of ulcers in 8 of 19 (42 %) patients who were intractable to previous therapy.

The US trial indicated that Ranitidine Tablets USP, 150 mg twice daily significantly reduced the frequency of heartburn attacks and severity of heartburn pain within 1 to 2 weeks after starting therapy. The improvement was maintained throughout the 6-week trial period. Moreover, patient response rates demonstrated that the effect on heartburn extends through both the day and night time periods.

In 2 additional US multicenter, double-blind, placebo-controlled, 2-week trials, Ranitidine Tablets USP, 150 mg twice daily was shown to provide relief of heartburn pain within 24 hours of initiating therapy and a reduction in the frequency of severity of heartburn.

* All patients were permitted antacids as needed for relief of pain

No additional benefit in healing of esophagitis or in relief of heartburn was seen with a ranitidine dose of 300 mg 4 times daily.

The following have been reported as events in clinical trials or in the routine management of patients treated with Ranitidine Tablets, USP. The relationship to therapy with Ranitidine Tablets, USP has been unclear in many cases. Headache, sometimes severe, seems to be related to administration of Ranitidine Tablets, USP.
Central Nervous system: Rarely, malaise, dizziness, somnolence, insomnia, and vertigo. Rare cases of reversible mental confusion, agitation, depression, and hallucinations have been reported, predominantly in severely ill elderly patients. Rare cases of reversible blurred vision suggestive of a change in accommodation have been reported. Rare reports of reversible involuntary motor disturbances have been received.
Cardiovascular: As with other H2-blockers, rare reports of arrhythmias such as tachycardia, bradycardia, atrioventricular block, and premature ventricular beats.
Gastrointestinal: Constipation, diarrhea, nausea/vomiting, abdominal discomfort/pain and rare reports of pancreatitis.
Hepatic:There have been occasional reports of hepatocellular, cholestatic, or mixed hepatitis, with or without jaundice. In such circumstances, ranitidine should be immediately discontinued. These events are usually reversible, but in rare circumstances death has occurred. Rare cases of hepatic failure have also been reported. In normal volunteers, SGPT values were increased to at least twice the pretreatment levels in 6 of 12 subjects receiving 100 mg intravenously 4 times daily for 7 days, and in 4 of 24 subjects receiving 50 mg intravenously 4 times daily for 5 days.
Musculoskeletal: Rare reports of arthralgias and myalgias.
Hematologic: Blood count changes (leukopenia, granulocytopenia, and thrombocytopenia) have occurred in a few patients. These were usually reverisible. Rare cases of agranulocytosis, pancytopenia, sometimes with marrow hypoplasia, and aplastic anemia and exceedingly rare cases of acquired immune hemolytic anemia have been reported.
Endocrine: Controlled studies in animals and man have shown no stimulation of any pituitary hormone by Ranitidine Tablets, USP and no antiandrogenic activity, and cimetidine–induced gynecomastia and impotence in hypersecretory patients have resolved when Ranitidine Tablets, USP has been substituted. However, occasional cases of impotence and loss of libido have been reported in male patients receiving Ranitidine Tablets, USP but the incidence did not differ from that in the general population. Rare cases of breast symptoms and conditions, including galactorrhea and gynecomastia, have been reported in both males and females.
Integumentary: Rash, including rare cases of erythema multiforme. Rare cases of alopecia and vasculitis.
Respiratory: A large epidemiological study suggested an increased risk of developing pneumonia in current users of histamine–2–receptor antagonists (H2RAs) compared to patients who had stopped H2RA treatment, with an observed adjusted relative risk of 1.63 (95% CI, 1.07 – 2.48). However, a causal relationship between use of H2RAs and pneumonia has not been established.
Other: Rare cases of hypersensitivity reactions (e.g., bronchospasm, fever, rash, eosinophilia), anaphylaxis, angioneurotic edema, acute interstitial nephritis, and small increase in serum creatinine.

There has been limited experience with overdosage. Reported acute ingestions of up to 18 g orally have been associated with transient adverse effects similar to those encountered in normal clinical experience (see ADVERSE REACTIONS). In addition, abnormalities of gait and hypotension have been reported.
When overdosage occurs, the usual measures to remove unabsorbed material from the gastrointestinal tract, clinical monitoring, and supportive therapy should be employed.
Studies in dogs receiving dosages of Ranitidine Tablets, USP in excess of 225 mg/kg/day have shown muscular tremors, vomiting, and rapid respiration. Single oral doses of 1,000 mg/kg in mice and rats were not lethal. Intravenous LD50 values in mice and rats were 77 and 83 mg/kg, respectively.

How is Ranitidine Tablets Supplied

on one side and

MULTISTIX is a registered trademark of Bayer Healthcare LLC. 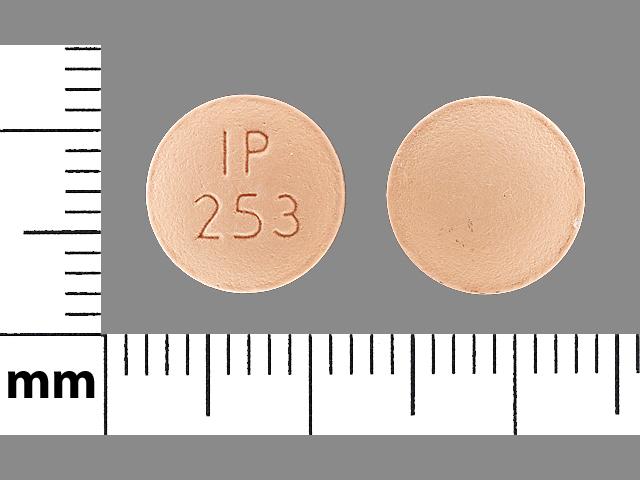