Indications and Usage for Ibuprofen Llysine

Ibuprofen Lysine is indicated to close a clinically significant patent ductus arteriosus (PDA) in premature infants weighing between 500 and 1500 g, who are no more than 32 weeks gestational age when usual medical management (e.g., fluid restriction, diuretics, respiratory support, etc.) is ineffective. The clinical trial was conducted among infants with an asymptomatic PDA. However, the consequences beyond 8 weeks after treatment have not been evaluated; therefore, treatment should be reserved for infants with clear evidence of a clinically significant PDA.

A course of therapy is three doses of Ibuprofen Lysine administered intravenously (administration via an umbilical arterial line has not been evaluated). An initial dose of 10 mg per kilogram is followed by two doses of 5 mg per kilogram each, after 24 and 48 hours. All doses should be based on birth weight. If anuria or marked oliguria (urinary output <0.6 mL/kg/hr) is evident at the scheduled time of the second or third dose of Ibuprofen Lysine, no additional dosage should be given until laboratory studies indicate that renal function has returned to normal. If the ductus arteriosus closes or is significantly reduced in size after completion of the first course of Ibuprofen Lysine, no further doses are necessary. If during continued medical management the ductus arteriosus fails to close or reopens, then a second course of Ibuprofen Lysine, alternative pharmacological therapy, or surgery may be necessary.

After the first withdrawal from the vial, any solution remaining must be discarded because Ibuprofen Lysine contains no preservative.

Since Ibuprofen Lysine is potentially irritating to tissues, it should be administered carefully to avoid extravasation.

Ibuprofen Lysine should not be simultaneously administered in the same intravenous line with Total Parenteral Nutrition (TPN). If necessary, TPN should be interrupted for a 15-minute period prior to and after drug administration. Line patency should be maintained by using dextrose or saline.

20 mg/2 mL (10 mg/mL) as a clear sterile preservative-free solution of the L-lysine salt of ibuprofen in a 2 mL single-use vial.

Ibuprofen Lysine is contraindicated in:

There are no long-term evaluations of the infants treated with ibuprofen at durations greater than the 36 weeks post-conceptual age observation period. Ibuprofen’s effects on neurodevelopmental outcome and growth as well as disease processes associated with prematurity (such as retinopathy of prematurity and chronic lung disease) have not been assessed.

Ibuprofen Lysine may alter the usual signs of infection. The physician must be continually on the alert and should use the drug with extra care in the presence of controlled infection and in infants at risk of infection.

Ibuprofen Lysine, like other non-steroidal anti-inflammatory agents, can inhibit platelet aggregation. Preterm infants should be observed for signs of bleeding. Ibuprofen has been shown to prolong bleeding time (but within the normal range) in normal adult subjects. This effect may be exaggerated in patients with underlying hemostatic defects (see CONTRAINDICATIONS).

Ibuprofen has been shown to displace bilirubin from albumin binding-sites; therefore, it should be used with caution in patients with elevated total bilirubin.

Ibuprofen Lysine should be administered carefully to avoid extravascular injection or leakage, as solution may be irritating to tissue.

The most frequently reported adverse events with Ibuprofen Lysine were as shown in Table 1. 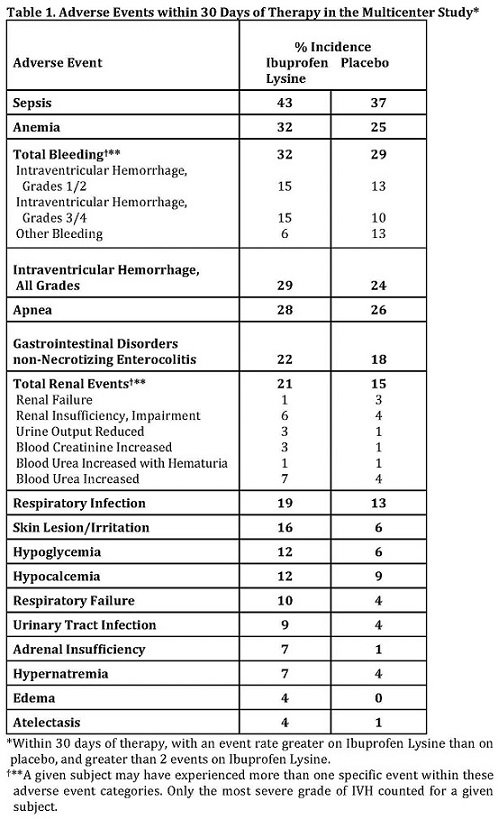 Compared to placebo, there was a small decrease in urinary output in the ibuprofen group on days 2-6 of life, with a compensatory increase in urine output on day 9. In other studies, adverse events classified as renal insufficiency including oliguria, elevated BUN, elevated creatinine, or renal failure were reported in ibuprofen treated infants.

The following adverse reactions have been identified from spontaneous post-marketing reports or published literature: gastrointestinal perforation, necrotizing enterocolitis, and pulmonary hypertension. Because these reactions are reported voluntarily from a population of uncertain size, it is not always possible to reliably estimate their frequency, or establish a causal relationship to drug exposure.

Safety and effectiveness have only been established in premature infants.

The following signs and symptoms have occurred in individuals (not necessarily in premature infants) following an overdose of oral ibuprofen: breathing difficulties, coma, drowsiness, irregular heartbeat, kidney failure, low blood pressure, seizures, and vomiting. There are no specific measures to treat acute overdosage with Ibuprofen Lysine. The patient should be followed for several days because gastrointestinal ulceration and hemorrhage may occur.

Ibuprofen Lysine is designated chemically as α-methyl-4-(2-methyl propyl) benzeneacetic acid lysine salt. Its molecular weight is 352.48. Its empirical formula is C 19H 32N 2O 4. It occurs as a white crystalline solid which is soluble in water and slightly soluble in ethanol.

The mechanism of action through which ibuprofen causes closure of a patent ductus arteriosus (PDA) in neonates is not known. In adults, ibuprofen is an inhibitor of prostaglandin synthesis.

The pharmacokinetic data were obtained from 54 Ibuprofen Lysine-treated premature infants included in a double-blind, placebo-controlled, randomized, multicenter study. Infants were less than 30 weeks gestational age, weighed between 500 and 1000 g, and exhibited asymptomatic PDA with evidence of echocardiographic documentation of ductal shunting. Dosing was initially 10 mg/kg followed by 5 mg/kg at 24 and 48 hours.

The population average clearance and volume of distribution values of racemic ibuprofen for premature infants at birth were 3 mL/kg/h and 320 mL/kg, respectively. Clearance increased rapidly with post-natal age (an average increase of approximately 0.5 mL/kg/h per day). Inter-individual variability in clearance and volume of distribution were 55% and 14%, respectively. In general, the half-life in infants is more than 10 times longer than in adults.

The metabolism and excretion of ibuprofen in premature infants have not been studied.

In adults, renal elimination of unchanged ibuprofen accounts for only 10-15% of the dose. The excretion of ibuprofen and metabolites occurs rapidly in both urine and feces. Approximately 80% of the dose administered orally is recovered in urine as hydroxyl and carboxyl metabolites, respectively, as a mixture of conjugated and unconjugated forms. Ibuprofen is eliminated primarily by metabolism in the liver where CYP2C9 mediates the 2- and 3-hydroxylations of R- and S-ibuprofen. Ibuprofen and its metabolites are further conjugated to acyl glucuronides.

In neonates, renal function and the enzymes associated with drug metabolism are underdeveloped at birth and substantially increase in the days after birth.

Of the infants requiring rescue within the first 14 days after the first dose of study drug, no statistically significant difference was observed between the Ibuprofen Lysine and placebo groups for mean age at start of first rescue treatment (8.7 days, range 4-15 days, for the Ibuprofen Lysine group and 6.9 days, range 2-15 days, for the placebo group).

The groups were similar in the number of deaths by day 14, the number of patients on a ventilator or requiring oxygenation at day 1, 4 and 14, the number of patients requiring surgical ligation of their PDA (12%), the number of cases of Pulmonary Hemorrhage and Pulmonary Hypertension by day 14, and Bronchopulmonary Dysplasia at day 28. In addition, no significant differences were noted in the incidences of Stage 2 and 3 Necrotizing Enterocolitis, Grades 3 and 4 Intraventricular Hemorrhage, Periventricular Leukomalacia and Retinopathy of Prematurity between groups as determined at 36±1 weeks adjusted gestational age.

*Ibuprofen Lysine Injection is dispensed in a glass vial having a silicon dioxide coating or polymer coating that inhibits the formation of particulates that result from the interaction of the ibuprofen lysine with untreated glass.

Patients’ caregivers should be informed that like other NSAIDS, Ibuprofen Lysine can inhibit clot formation therefore their infant should be monitored for any signs of bleeding.

Patients’ caregivers should be informed that the infants’ skin and tissues should be monitored as leakage from administration may be irritating to tissue.

(10 mg/mL)
Sterile Solution for Intravenous Use Only 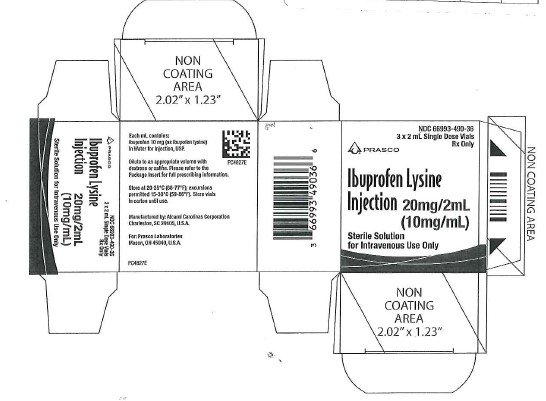 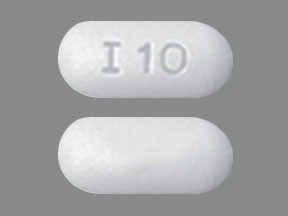