Note: This document contains side effect information about asenapine. Some dosage forms listed on this page may not apply to the brand name Saphris.

Common side effects of Saphris include: akathisia, drowsiness, extrapyramidal reaction, headache, and dizziness. Other side effects include: gastric hypersecretory conditions, hypoesthesia, sialorrhea, and weight gain. Continue reading for a comprehensive list of adverse effects.

Serious side effects of Saphris

Along with its needed effects, asenapine (the active ingredient contained in Saphris) may cause some unwanted effects. Although not all of these side effects may occur, if they do occur they may need medical attention.

Check with your doctor immediately if any of the following side effects occur while taking asenapine:

Other side effects of Saphris

Some side effects of asenapine may occur that usually do not need medical attention. These side effects may go away during treatment as your body adjusts to the medicine. Also, your health care professional may be able to tell you about ways to prevent or reduce some of these side effects.

Oral hypoesthesia occurred in up to 30% of pediatric patients and up to 24% of adults.

Application site reactions that include oral ulcers, blisters, peeling/sloughing, and inflammation primarily in the sublingual area have led to discontinuation of therapy in many cases. Oral hypoesthesia and/or oral paraesthesia may occur directly after administration and usually resolve in 1 hour.[Ref]

While all atypical antipsychotics have been associated with metabolic changes including hyperglycemia, dyslipidemia, and weight gain, the degree of metabolic change differs for each agent.

In clinical trials with this drug, changes from baseline in fasting glucose ranged from -0.6 to 3.8 mg/dL in adults and -0.45 to 1.43 mg/dL in pediatric patients treated with this drug for 3 to 6 weeks compared with -0.2 and -2.24 mg/dL in adults and pediatric patients receiving placebo, respectively. In a 52-week double-blind, comparator-controlled trial in primarily schizophrenic patients, the mean increase in fasting glucose from baseline was 2.4 mg/dL.

An increase of 7% or more in body weight occurred in 8% to 12% of adults and 4.4% to 4.8% of pediatric patients treated with this drug for 3 weeks compared with 1.1% and 1.6%, respectively in adults and pediatric patients receiving placebo. In a 52-week double-blind, comparator-controlled trial in primarily schizophrenic patients, the mean increase in weight from baseline was 0.9 kg.[Ref]

In a dedicated QT study in patients with schizophrenia, doses of 5, 10, 15, and 20 mg twice a day were compared with placebo. QTc interval increases ranged from 2 to 5 msec. No patients had QTc increases of 60 msec or greater, nor did any patient experience a QTc of 500 msec or greater.

Orthostatic hypotension was reported in 4.1% of elderly subjects compared with 0.3% in the combined study populations.[Ref] 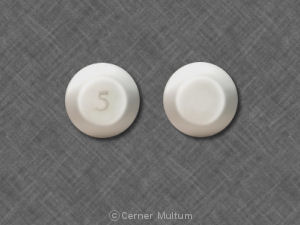