Note: This document contains side effect information about brompheniramine. Some of the dosage forms listed on this page may not apply to the brand name Lodrane 24.

Nervous system side effects have included central nervous system (CNS) depression, resulting in drowsiness and sedation in nearly 50% of patients treated. This effect has often been transient and ceased with continued use. Motor skills have be impaired and patients should be advised to avoid tasks which require attention. Patients should also avoid concomitant use with alcohol and other sedative-hypnotic drugs. Dyskinesias have rarely been reported following chronic use of brompheniramine (the active ingredient contained in Lodrane 24) [Ref]

A few cases of dyskinesias and tremors, often of the face, have been reported in patients whose chronic use of brompheniramine extended over a period of up to 10 years. Some of these cases were only partially relieved by discontinuation of the drug. Haloperidol was successful in relieving symptoms in these patients. Spasmodic torticollis has been reported in a child given brompheniramine over an eight month period.[Ref]

Gastrointestinal side effects have include nausea, dry mouth and constipation.[Ref]

Cardiovascular effects of brompheniramine (the active ingredient contained in Lodrane 24) have included hypotension, tachycardia, and palpitations.[Ref]

Ocular side effects have included blurred vision, diplopia, and dry eyes due to anticholinergic effects.[Ref]

Hematologic side effects have included rare cases of hemolytic anemia, thrombocytopenia, and agranulocytosis.[Ref] 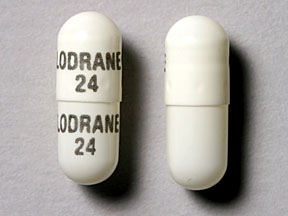