Adjunctive therapy (i.e., in combination with other anticonvulsants) of partial seizures in adults with epilepsy.

Administer orally without regard to meals. Encourage patients to drink plenty of fluids while taking the drug to reduce the risk of kidney stones.

After 2 weeks, may increase dosage to 200 mg daily for at least 2 weeks. May further increase to 300 and 400 mg daily; allow ≥2 weeks between dosage changes (to achieve steady state at each dosage level). Some clinicians may prefer to administer lower dosages for longer periods (in order to fully assess safety at steady state).

Dosages >400 mg daily may not be associated with increased therapeutic benefit.

Titrate dosage slowly. Do not use in patients with renal failure (GFR <50 mL/minute).

No specific dosage recommendations; however, select dosage cautiously, usually starting at the lower end of the dosage range, because of age-related decreases in hepatic, renal, or cardiac function and concomitant diseases and drug therapy.

Aplastic anemia and agranulocytosis reported rarely; relationship between these events and dosage or duration of therapy not established.

Oligohidrosis (a reduction in sweating) and hyperthermia reported, particularly in pediatric patients. Closely monitor patients for evidence of decreased sweating and increased body temperature, particularly in warm or hot weather.

Consider risk of hyperthermia when zonisamide is used concomitantly with other drugs that predispose patients to heat-related disorders. (See Pediatric Use under Cautions, Drugs Predisposing to Heat-related Disorders under Interactions, and Advice to Patients.)

Closely monitor all patients currently receiving or beginning anticonvulsant therapy for changes in behavior that may indicate emergence or worsening of suicidal thoughts or behavior or depression.

Balance risk of suicidality with the risk of untreated illness. Epilepsy and other illnesses treated with anticonvulsants are themselves associated with morbidity and mortality and an increased risk of suicidality. If suicidal thoughts or behavior emerge during anticonvulsant therapy, consider whether these symptoms may be related to the illness itself. (See Advice to Patients.)

Hyperchloremic, non-anion gap, metabolic acidosis reported. (See Pediatric Use under Cautions.) Manifestations may include hyperventilation, fatigue, anorexia, cardiac arrhythmias, or stupor. Generally occurs early in treatment, but may occur at any time during therapy.

Measure serum bicarbonate concentrations prior to and periodically during therapy. If metabolic acidosis develops and persists, consider reducing dosage or discontinuing therapy (by gradually tapering dosage) and modifying the patient’s anticonvulsant drug regimen as appropriate. If therapy is continued, consider alkali treatment.

Zonisamide is a sulfonamide; potentially fatal reactions may occur as a result of severe reactions to sulfonamides, including Stevens-Johnson syndrome, toxic epidermal necrolysis, fulminant hepatic necrosis, agranulocytosis, aplastic anemia, and other blood dyscrasias.

Rash (usually occurring early in treatment and not dose related) reported in clinical studies. At least 49 cases of severe rash (Stevens-Johnson syndrome or toxic epidermal necrolysis) reported during postmarketing experience in Japan; no confirmed cases reported to date in US.

If manifestations of multi-organ hypersensitivity occur, evaluate patient immediately. If an alternative cause cannot be identified, discontinue zonisamide.

Substantial increases in Scr and BUN reported; such increases appeared to persist over time but were not progressive. Consider periodically monitoring renal function during zonisamide therapy.

Discontinue use in patients who develop acute renal failure or clinically important, sustained increases in Scr and BUN.

Distributes into human milk. Discontinue nursing or the drug.

Safety and efficacy not established in children <16 years of age. However, the drug has been used in some pediatric patients† for the treatment of epilepsy.

Studies conducted with pediatric patients indicate that frequency of some adverse effects (e.g., metabolic acidosis, oligohidrosis and hyperthermia) may be increased compared with adults.

If used in pediatric patients (not an FDA-labeled population), closely monitor for evidence of decreased sweating and increased body temperature, especially in warm or hot weather or when other drugs that predispose patients to heat-related disorders (e.g., carbonic anhydrase inhibitors) are used concomitantly. (See Drugs Predisposing to Heat-related Disorders under Interactions.)

Pediatric patients may be at increased risk for zonisamide-induced metabolic acidosis; may be more severe in younger patients. Specific effects of zonisamide on growth and bone not studied; chronic metabolic acidosis may reduce growth rates in pediatric patients, resulting in a reduction in the maximal height achieved. (See Metabolic Acidosis under Cautions, Specific Drugs under Interactions, and Advice to Patients.)

Insufficient experience in patients ≥65 years of age to determine whether they respond differently than younger adults.

Use with caution in patients with hepatic impairment; slower dosage titration and more frequent monitoring may be necessary.

Use with caution in patients with renal impairment; slower dosage titration and more frequent monitoring may be necessary.

Because of insufficient experience concerning dosage and toxicity, do not use in patients with renal failure (GFR <50 mL/minute).

CYP3A4 inhibitors: Pharmacokinetics of zonisamide may be altered, but not expected to be clinically important; dosage adjustment not necessary.

CYP3A4 inducers: Zonisamide concentrations may be altered when CYP3A4-inducing drugs are introduced or withdrawn from therapy, or dosage is adjusted. Closely monitor patients and adjust dosage of zonisamide as necessary.

May potentially affect the pharmacokinetics of P-gp substrates.

Not expected to interact with drugs metabolized by UGT enzymes.

Increased risk of oligohidrosis and hyperthermia with drugs that predispose to heat-related disorders.

Food delays the time to peak plasma concentration but does not affect bioavailability.

Extensively binds to erythrocytes, resulting in an 8-fold higher concentration of zonisamide in erythrocytes than in plasma.

Does not induce own metabolism.

Excreted principally in urine as unchanged drug and a glucuronide metabolite.

In patients with hepatic impairment, pharmacokinetics not studied to date.

Clearance of zonisamide may be increased at the end of the second trimester in pregnant women.

Pharmacokinetics were similar in geriatric and young healthy volunteers in single-dose studies. (See Geriatric Patients under Dosage and Administration.) 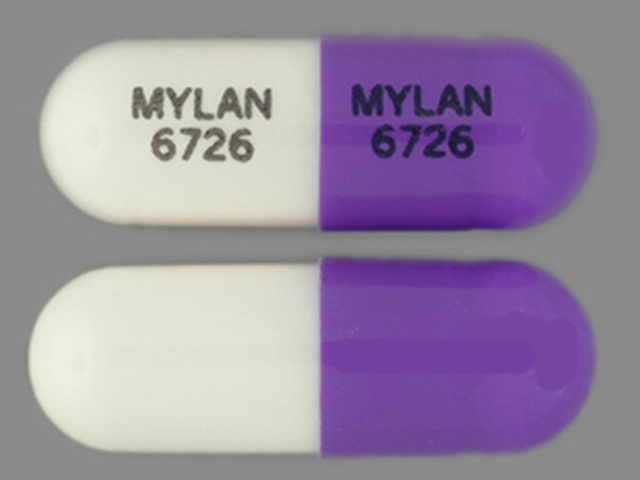