Indications and Usage for Symproic

The recommended dosage of Symproic is 0.2 mg orally once daily with or without food.

Tablets: 0.2 mg naldemedine; supplied as yellow, round, film-coated, debossed with Shionogi marking above the identifier code 222 on one side and 0.2 on the other side.

Serious and important adverse reactions described elsewhere in labeling include:

In Studies 1 and 2, patients on laxatives were required to discontinue their use prior to study enrollment. All patients were restricted to bisacodyl rescue treatment during the study. In Study 3, approximately 60% of patients in both treatment groups were on a laxative regimen at baseline; patients were allowed to continue using their laxative regimen throughout the study duration. The safety profile of Symproic relative to placebo was similar regardless of laxative use.

Two patients developed symptoms of hypersensitivity following a single dose of Symproic. One patient reported bronchospasm and another rash.

Table 3 includes drugs with clinically important drug interactions with Symproic and instructions for preventing or managing the interaction.

Naldemedine crosses the placenta, and may precipitate opioid withdrawal in a fetus due to the immature fetal blood-brain barrier.

There is no information regarding the presence of naldemedine in human milk, the effects on the breastfed infant, or the effects on milk production. Naldemedine was present in the milk of rats [see Data]. Because of the potential for serious adverse reactions, including opioid withdrawal in breastfed infants, a decision should be made to discontinue breastfeeding or discontinue the drug, taking into account the importance of the drug to the mother. If drug is discontinued in order to minimize drug exposure to a breastfed infant, advise women that breastfeeding may be resumed 3 days after the final dose of Symproic.

The safety and effectiveness of Symproic have not been established in pediatric patients.

Of the 1163 patients exposed to Symproic in clinical studies, 183 (16%) were 65 years of age and over, while 37 (3%) were 75 years and over. No overall differences in safety or effectiveness between these and younger patients were observed, but greater sensitivity of some older individuals cannot be ruled out. In a population pharmacokinetic analysis, no age-related alterations in the pharmacokinetics of naldemedine were observed [see Clinical Pharmacology (12.3)].

Single doses of naldemedine up to 3 mg (15 times the recommended dose) and multiple doses of 0.4 mg (twice the recommended dose) for 28 days have been administered to patients with OIC in clinical studies. Dose-dependent increases in gastrointestinal-related adverse reactions, including abdominal pain, diarrhea, nausea, and vomiting, were observed. Also, chills, hyperhidrosis, and dizziness were reported more frequently at 1 and 3 mg doses and hyperhidrosis at the 0.4 mg dose.

No antidote for naldemedine is known. Hemodialysis is not an effective means to remove naldemedine from the blood [see Clinical Pharmacology (12.3)].

The empirical formula for naldemedine tosylate is C32H34N4O6∙C7H8O3S and the molecular weight is 742.84.

Naldemedine tosylate is a white to light tan powder, soluble in dimethylsulfoxide and methanol, slightly soluble in alcohol and water, and independent of pH.

Naldemedine is an opioid antagonist with binding affinities for mu-, delta-, and kappa-opioid receptors. Naldemedine functions as a peripherally-acting mu-opioid receptor antagonist in tissues such as the gastrointestinal tract, thereby decreasing the constipating effects of opioids.

Naldemedine is a derivative of naltrexone to which a side chain has been added that increases the molecular weight and the polar surface area, thereby reducing its ability to cross the blood-brain barrier (BBB). Naldemedine is also a substrate of the P-glycoprotein (P-gp) efflux transporter. Based on these properties, the CNS penetration of naldemedine is expected to be negligible at the recommended dose levels, limiting the potential for interference with centrally-mediated opioid analgesia.

At a dose up to 5 times the recommended dose, Symproic does not prolong the QT interval to any clinically relevant extent.

Plasma protein binding of naldemedine in humans is 93% to 94%. The mean apparent volume of distribution during the terminal phase (Vz/F) is 155 L.

The terminal elimination half-life of naldemedine is 11 hours.

Plasma concentrations of naldemedine in subjects with ESRD requiring hemodialysis were similar when Symproic was administered either pre- or post-hemodialysis, indicating that naldemedine was not removed from the blood by hemodialysis.

The effect of hepatic impairment on the pharmacokinetics of a 0.2 mg single oral dose of Symproic was studied in subjects with hepatic impairment classified as mild (n=8, Child-Pugh Class A) or moderate (n=8, Child-Pugh Class B) and compared with healthy subjects with normal hepatic function (n=8). The pharmacokinetics of naldemedine between subjects in all groups were similar.

The effect of severe hepatic impairment (Child-Pugh Class C) on the pharmacokinetics of naldemedine was not evaluated [see Use in Specific Populations (8.6)].

Effect of Naldemedine on Other Drugs

Effect of Other Drugs on Naldemedine

Naldemedine is primarily metabolized by the CYP3A4 enzyme with a minor contribution from UGT1A3. Naldemedine is a substrate of P-gp. The effects of co-administered drugs on the pharmacokinetics of naldemedine are summarized in Figure 1.

Figure 1: Effect of Co-Administered Drugs on the Pharmacokinetics of Naldemedine

Efavirenz (moderate CYP3A inducer): Simulation using physiologically-based pharmacokinetic modeling suggested that concomitant use of efavirenz decreases exposure to naldemedine by 43%. The clinical consequence of this decreased exposure is unknown.

No drug interaction studies have been conducted for Symproic with drugs that alter gastric pH (e.g., antacids, proton-pump inhibitors).

In 2-year carcinogenicity studies, there were no drug-related neoplastic findings following oral administration of naldemedine to mice and rats at doses up to 100 mg/kg/day (approximately 17,500 and 6,300 times the human exposures (AUC) at the recommended human dose, respectively).

Naldemedine was not genotoxic in the in vitro bacterial reverse mutation (Ames) assay, a chromosomal aberration assay with cultured Chinese hamster lung cells, or an in vivo micronucleus assay with rat bone marrow cells.

Symproic was evaluated in two replicate, 12-week, randomized, double-blind, placebo-controlled trials (Study 1 and Study 2) in which Symproic was used without laxatives in patients with OIC and chronic non-cancer pain.

Patients receiving a stable opioid morphine equivalent daily dose of at least 30 mg for at least 4 weeks before enrollment and self-reported OIC were eligible for clinical trial participation.

Patients with evidence of significant structural abnormalities of the GI tract were not enrolled in these trials.

In Studies 1 and 2, OIC was confirmed through a two-week run in period and was defined as no more than 4 spontaneous bowel movements (SBMs) total over 14 consecutive days and less than 3 SBMs in a given week with at least 25% of the SBMs associated with one or more of the following conditions: (1) straining; (2) hard or lumpy stools; (3) having a sensation of incomplete evacuation; and (4) having a sensation of anorectal obstruction/blockage.

An SBM was defined as a bowel movement (BM) without rescue laxative taken within the past 24 hours. Patients with no BMs over the 7 consecutive days prior to and during the 2-week screening period or patients who had never taken laxatives were excluded.

In the screening and treatment periods, bisacodyl was used as rescue laxative if patients had not had a BM for 72 hours and were allowed one-time use of an enema, if after 24 hours of taking bisacodyl they still had not had a BM.

A total of 547 patients in Study 1 and 553 patients in Study 2 were randomized in a 1:1 ratio to receive Symproic 0.2 mg once daily or placebo for 12 weeks. Study medication was administered without regard to meals.

Prior to enrollment, patients were using their current opioid for a mean duration of approximately 5 years. A wide range of types of opioids were used. The mean baseline opioid morphine equivalent daily dosage was 132 mg and 121 mg per day for Studies 1 and 2, respectively.

The responder rates in Studies 1 and 2 are shown in Table 4.

Advise patients to discontinue Symproic if treatment with the opioid pain medication is also discontinued.

Advise patients that clusters of symptoms consistent with opioid withdrawal may occur while taking Symproic and to contact their healthcare provider if these symptoms occur [see Warnings and Precautions (5.2)].

Advise females of reproductive potential, who become pregnant or are planning to become pregnant, that the use of Symproic during pregnancy may precipitate opioid withdrawal in a fetus due to the undeveloped blood-brain barrier [see Use in Specific Populations (8.1)].

Advise women that breastfeeding is not recommended during treatment with Symproic and for 3 days after the final dose [see Use in Specific Populations (8.2)].

Dispense the enclosed Medication Guide
to each patient.

Each tablet contains 0.2 mg of
naldemedine (equivalent to
0.26 mg of naldemedine tosylate).

Dispense the enclosed Medication Guide
to each patient.

PHYSICIAN SAMPLES NOT FOR SALE
FOR ORAL USE ONLY
Rx ONLY 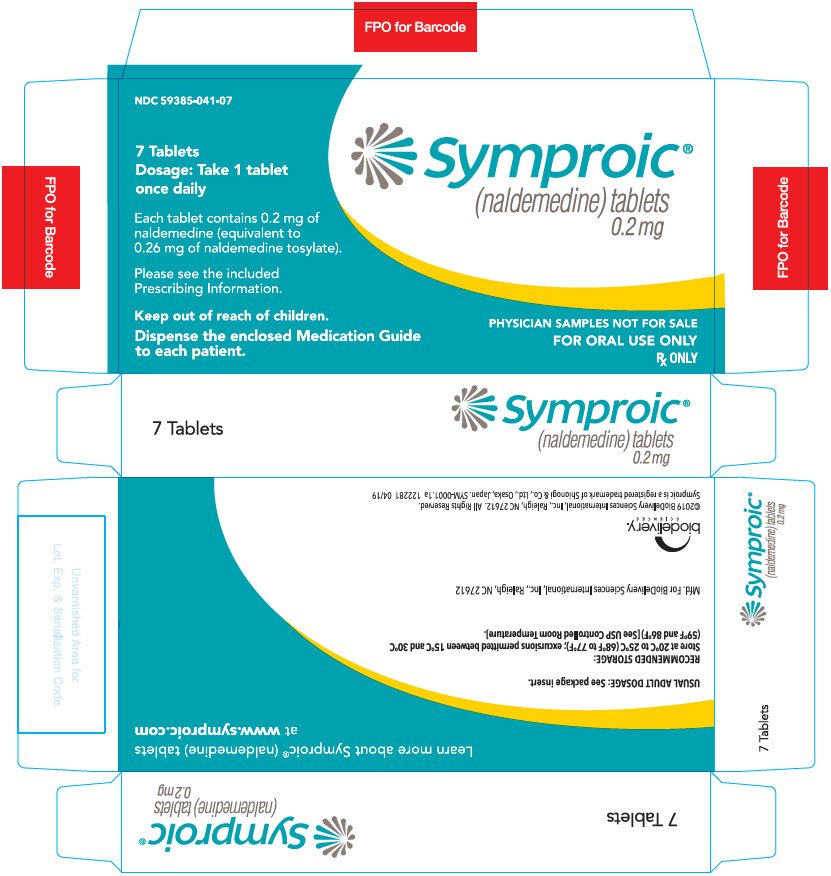 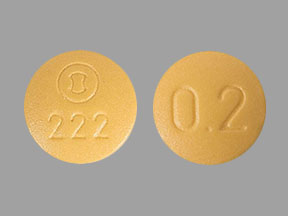