Chemically, Metaxalone is 5-[(3,5-dimethylphenoxy)methyl]-2-oxazolidinone. The empirical formula is C 12H 15NO 3, which corresponds to a molecular weight of 221.25. The structural formula is: 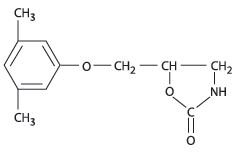 The mechanism of action of Metaxalone in humans has not been established, but may be due to general central nervous system (CNS) depression. Metaxalone has no direct action on the contractile mechanism of striated muscle, the motor end plate, or the nerve fiber.

The pharmacokinetics of Metaxalone have been evaluated in healthy adult volunteers after single dose administration of Metaxalone under fasted and fed conditions at doses ranging from 400 mg to 800 mg.

The single-dose pharmacokinetic parameters of Metaxalone in two groups of healthy volunteers are shown in Table 1.

A randomized, two-way, crossover study was conducted in 42 healthy volunteers (31 males, 11 females) administered one 400 mg Metaxalone tablet under fasted conditions and following a standard high-fat breakfast. Subjects ranged in age from 18 to 48 years (mean age = 23.5 ± 5.7 years). Compared to fasted conditions, the presence of a high fat meal at the time of drug administration increased C max by 177.5% and increased AUC (AUC 0-t, AUC ∞) by 123.5% and 115.4%, respectively. Time-to-peak concentration (T max) was also delayed (4.3 h versus 3.3 h) and terminal half-life was decreased (2.4 h versus 9.0 h) under fed conditions compared to fasted.

In a second food effect study of similar design, two 400 mg Metaxalone tablets (800 mg) were administered to healthy volunteers (N=59, 37 males, 22 females), ranging in age from 18-50 years (mean age = 25.6 ± 8.7 years). Compared to fasted conditions, the presence of a high fat meal at the time of drug administration increased C max by 193.6% and increased AUC (AUC 0-t, AUC ∞) by 146.4% and 142.2%, respectively. Time-to-peak concentration (T max) was also delayed (4.9 h versus 3.0 h) and terminal half-life was decreased (4.2 h versus 8.0 h) under fed conditions compared to fasted conditions. Similar food effect results were observed in the above study when one Metaxalone 800 mg tablet was administered in place of two Metaxalone 400 mg tablets. The increase in Metaxalone exposure coinciding with a reduction in half-life may be attributed to more complete absorption of Metaxalone in the presence of a high fat meal (Figure 1). 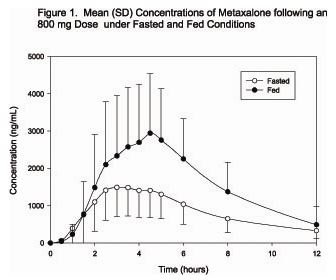 Although plasma protein binding and absolute bioavailability of Metaxalone are not known, the apparent volume of distribution (V/F ~ 800 L) and lipophilicity (log P = 2.42) of Metaxalone suggest that the drug is extensively distributed in the tissues. Metaxalone is metabolized by the liver and excreted in the urine as unidentified metabolites. Hepatic Cytochrome P450 enzymes play a role in the metabolism of Metaxalone. Specifically, CYP1A2, CYP2D6, CYP2E1, and CYP3A4 and, to a lesser extent, CYP2C8, CYP2C9, and CYP2C19 appear to metabolize Metaxalone.

The bioavailability of Metaxalone under fasted and fed conditions in three groups of healthy volunteers of varying age is shown in Table 2.

The effect of gender on the pharmacokinetics of Metaxalone was assessed in an open label study, in which 48 healthy adult volunteers (24 males, 24 females) were administered two Metaxalone 400 mg tablets (800 mg) under fasted conditions. The bioavailability of Metaxalone was significantly higher in females compared to males as evidenced by C max (2115 ng/mL versus 1335 ng/mL) and AUC ∞ (17884 ng•h/mL versus 10328 ng•h/mL). The mean half-life was 11.1 hours in females and 7.6 hours in males. The apparent volume of distribution of Metaxalone was approximately 22% higher in males than in females, but not significantly different when adjusted for body weight. Similar findings were also seen when the previously described combined dataset was used in the analysis.

The impact of hepatic and renal disease on the pharmacokinetics of Metaxalone has not been determined. In the absence of such information, Metaxalone should be used with caution in patients with hepatic and/or renal impairment.

Indications and Usage for Metaxalone

Metaxalone is indicated as an adjunct to rest, physical therapy, and other measures for the relief of discomforts associated with acute, painful musculoskeletal conditions. The mode of action of this drug has not been clearly identified, but may be related to its sedative properties. Metaxalone does not directly relax tense skeletal muscles in man.

Known hypersensitivity to any components of this product.

Known tendency to drug induced, hemolytic, or other anemias.

Risks from Concomitant Use with Alcohol or other CNS Depressants

The sedative effects of Metaxalone and other CNS depressants (e.g., alcohol, benzodiazepines, opioids, tricyclic antidepressants (TCAs)) may be additive. Exercise caution with patients who take more than one of these CNS depressants simultaneously. Follow patients closely for signs and symptoms of respiratory depression and sedation (see PRECAUTIONS: Drug Interactions).

Metaxalone should be administered with great care to patients with pre-existing liver damage. Serial liver function studies should be performed in these patients.

False-positive Benedict’s tests, due to an unknown reducing substance, have been noted. A glucose-specific test will differentiate findings.

Metaxalone may impair mental and/or physical abilities required for performance of hazardous tasks, such as operating machinery or driving a motor vehicle, especially when used with alcohol or other CNS depressants.

Inform patients that Metaxalone could cause a rare but potentially life-threatening condition resulting from administration of doses higher than the recommended dose or from concomitant administration of serotonergic drugs with Metaxalone used within the recommended dosage range. Warn patients of the symptoms of serotonin syndrome and to seek medical attention right away if symptoms develop. Instruct patients to inform their healthcare providers if they are taking, or plan to take, serotonergic medications (see WARNINGS, PRECAUTIONS: Drug Interactions, and OVERDOSAGE).

The sedative effects of Metaxalone and other CNS depressants (e.g., alcohol, benzodiazepines, opioids, tricyclic antidepressants (TCAs)) may be additive. Exercise caution with patients who take more than one of these CNS depressants simultaneously. Follow patients closely for signs and symptoms of respiratory depression and sedation (see WARNINGS).

The carcinogenic potential of Metaxalone has not been determined.

Reproduction studies in rats have not revealed evidence of impaired fertility or harm to the fetus due to Metaxalone. Post marketing experience has not revealed evidence of fetal injury, but such experience cannot exclude the possibility of infrequent or subtle damage to the human fetus. Safe use of Metaxalone has not been established with regard to possible adverse effects upon fetal development. Therefore, Metaxalone tablets should not be used in women who are or may become pregnant and particularly during early pregnancy unless, in the judgement of the physician, the potential benefits outweigh the possible hazards.

The most frequent reactions to Metaxalone include:

Immune System: anaphylaxis, hypersensitivity reaction, rash with or without pruritus;

Serotonin syndrome has been reported when Metaxalone was used at doses higher than the recommended dose (see WARNINGS and ADVERSE REACTIONS).

When determining the LD 50 in rats and mice, progressive sedation, hypnosis, and finally respiratory failure were noted as the dosage increased. In dogs, no LD 50 could be determined as the higher doses produced an emetic action in 15 to 30 minutes.

How is Metaxalone Supplied

Metaxalone Tablets, USP are available as 800 mg pink, capsule shaped, scored tablets, debossed “LCI” on one side and “14” bisect “35” on the other side. 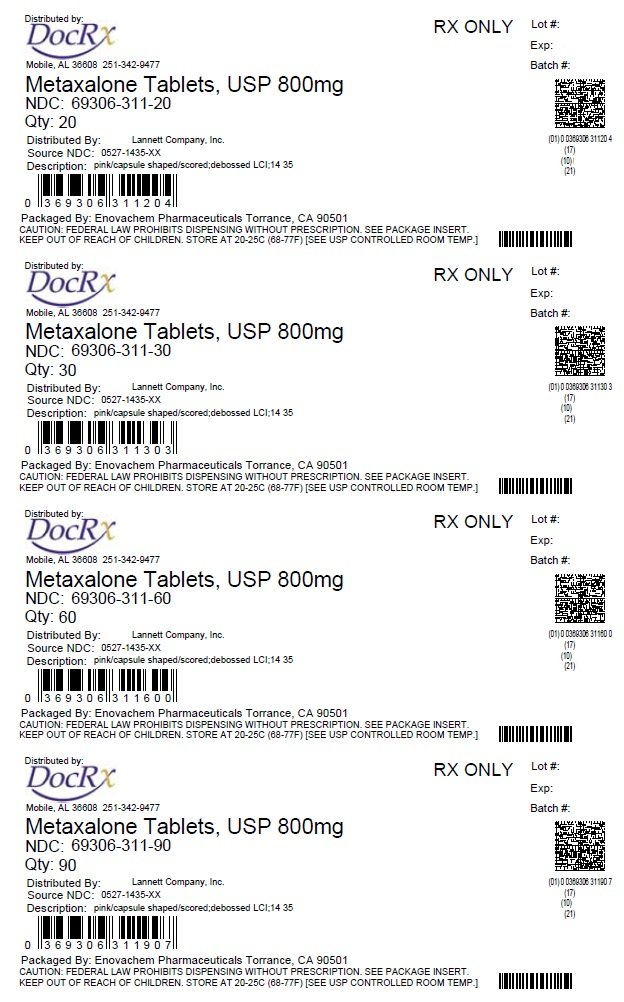 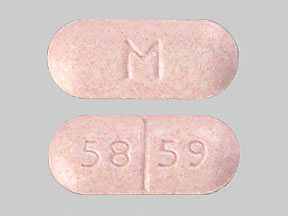