The dose of clonidine extended-release tablets must be adjusted according to the patient's individual blood pressure response. The following is a general guide to its administration in adults.

Dosing with clonidine extended-release tablets should be initiated at 0.17 mg once daily. Elderly patients may benefit from a lower initial dose [ see Use in Specific Populations (8.4)]. Initial dose is recommended to be administered at bedtime.

Further increments of 0.09 mg once daily may be made at weekly intervals if necessary until the desired response is achieved. The therapeutic doses most commonly employed have ranged from 0.17 mg to 0.52 mg once daily.

Clonidine extended-release tablets were studied at doses of 0.17 to 0.52 mg once daily. Doses higher than 0.52 mg per day were not evaluated and are not recommended.

Adjust dosage according to the degree of impairment. In patients with end stage kidney disease on maintenance dialysis, start at 0.09 mg per day and up-titrate slowly to minimize dose related adverse events.

Monitor patients carefully, especially for bradycardia, sedation and hypotension. Only a minimal amount of clonidine is removed during routine hemodialysis.

In patients with moderate to severe kidney impairment not undergoing dialysis, initiate clonidine at the same dose as for patients without renal impairment. Up-titrate slowly and monitor for dose-related adverse events.

Clonidine extended-release tablets should not be used in patients with known hypersensitivity to clonidine [ see Warnings and Precautions (5.2)].

Instruct patients not to discontinue therapy without consulting their physician. Sudden cessation of clonidine treatment has resulted in symptoms such as nervousness, agitation, headache, and tremor accompanied or followed by a rapid rise in blood pressure and elevated catecholamine concentrations in the plasma. The likelihood of such reactions to discontinuation of clonidine therapy appears to be greater after administration of higher doses or continuation of concomitant beta-blocker treatment and special caution is therefore advised in these situations. Rare instances of hypertensive encephalopathy, cerebrovascular accidents and death have been reported after clonidine withdrawal. When discontinuing therapy with clonidine extended-release tablets, reduce the dose gradually over 2 to 4 days to avoid withdrawal symptoms.

Because children commonly have gastrointestinal illnesses that lead to vomiting, they may be particularly susceptible to hypertensive episodes resulting from abrupt inability to take medication.

In patients who have developed localized contact sensitization to a clonidine transdermal system, substitution of oral clonidine therapy may be associated with the development of a generalized skin rash.

Patients who engage in potentially hazardous activities, such as operating machinery or driving, should be advised of a possible sedative effect of clonidine. The sedative effect may be increased by concomitant use of alcohol, barbiturates, or other sedating drugs.

The following serious adverse reactions are discussed in detail elsewhere in the labeling:

The following less frequent adverse reactions have also been reported in patients receiving immediate-release clonidine, but in many cases patients were receiving concomitant medication and a causal relationship has not been established.

Oro-otolaryngeal: Dryness of the nasal mucosa.

No drug interaction studies have been conducted with clonidine extended-release tablets.

The following have been reported with other oral formulations of clonidine.

Clonidine may potentiate the CNS-depressive effects of alcohol, barbiturates or other sedating drugs. If a patient receiving clonidine hydrochloride is also taking tricyclic antidepressants, the hypotensive effect of clonidine may be reduced, necessitating an increase in the clonidine dose.

Monitor heart rate in patients receiving clonidine concomitantly with agents known to affect sinus node function or AV nodal conduction, e.g., digitalis, calcium channel blockers, and beta-blockers. Sinus bradycardia resulting in hospitalization and pacemaker insertion has been reported in association with the use of clonidine concomitantly with diltiazem or verapamil.

Amitriptyline in combination with clonidine enhances the manifestation of corneal lesions in rats [ see Nonclinical Toxicology (13.2)].

Alcohol: Based on in vitro studies, high concentration of alcohol may increase the rate of release of clonidine extended-release tablets.

Pregnancy Category C. Reproduction studies performed in rabbits at doses up to approximately 3 times the oral maximum recommended daily human dose (MRDHD) of clonidine hydrochloride produced no evidence of a teratogenic or embryotoxic potential in rabbits. In rats, however, doses as low as 1/3 the oral MRDHD (1/15 the MRDHD on a mg/m 2 basis) of clonidine were associated with increased resorptions in a study in which dams were treated continuously from 2 months prior to mating. Increased resorptions were not associated with treatment at the same time or at higher dose levels (up to 3 times the oral MRDHD) when the dams were treated on gestation days 6 to 15. Increases in resorption were observed at much higher dose levels (40 times the oral MRDHD on a mg/kg basis; 4 to 8 times the MRDHD on a mg/m 2 basis) in mice and rats treated on gestation days 1 to 14 (lowest dose employed in the study was 500 mcg/kg).

No adequate, well-controlled studies have been conducted in pregnant women. Because animal reproduction studies are not always predictive of human response, this drug should be used during pregnancy only if clearly needed.

Clonidine is secreted in human milk.

Elderly patients may benefit from a lower initial dose [ see Dosage and Administration (2)].

The initial dosage should be based on the degree of impairment. Monitor patients carefully for hypotension and bradycardia, and titrate to higher doses cautiously. Only a minimal amount of clonidine is removed during routine hemodialysis.

Hypertension may develop early and may be followed by hypotension, bradycardia, respiratory depression, hypothermia, drowsiness, decreased or absent reflexes, weakness, irritability and miosis. The frequency of CNS depression may be higher in children than adults. Large overdoses may result in reversible cardiac conduction defects or dysrhythmias, apnea, coma, and seizures. Signs and symptoms of overdose generally occur within 30 minutes to two hours after exposure. As little as 0.1 mg of clonidine has produced signs of toxicity in children.

There is no specific antidote for clonidine overdosage. Clonidine overdosage may result in the rapid development of CNS depression; therefore, induction of vomiting with ipecac syrup is not recommended. Gastric lavage may be indicated following recent and/or large ingestions. Administration of activated charcoal and/or a cathartic may be beneficial. Supportive care may include atropine sulfate for bradycardia, intravenous fluids and/or vasopressor agents for hypotension and vasodilators for hypertension. Naloxone may be a useful adjunct for the management of clonidine-induced respiratory depression, hypotension and/or coma; blood pressure should be monitored since the administration of naloxone has occasionally resulted in paradoxical hypertension. Tolazoline administration has yielded inconsistent results and is not recommended as first-line therapy. Dialysis is not likely to significantly enhance the elimination of clonidine.

The largest overdose reported to date involved a 28-year old male who ingested 100 mg of clonidine hydrochloride powder. This patient developed hypertension followed by hypotension, bradycardia, apnea, hallucinations, semicoma, and premature ventricular contractions. The patient fully recovered after intensive treatment. Plasma clonidine levels were 60 ng/mL after 1 hour, 190 ng/mL after 1.5 hours, 370 ng/mL after 2 hours, and 120 ng/mL after 5.5 and 6.5 hours. In mice and rats, the oral LD 50 of clonidine is 206 and 465 mg/kg, respectively.

Clonidine hydrochloride, a centrally active alpha-adrenergic agonist, is an imidazoline derivative and exists as a mesomeric compound. The chemical name is 2-(2.6-dichlorophenylamino)-2-imidazoline hydrochloride. The following is the structural formula: 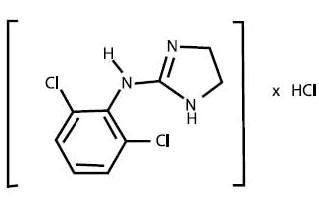 Clonidine extended-release tablets were was studied in an open-label crossover, force titration, partially randomized trial in patients with mild and moderate essential hypertension who were on two or fewer antihypertensive medications. The trial was designed to compare steady-state exposures between the Clonidine extended-release tablets and clonidine immediate-release tablets. There were up- and down-titration phases. There was no washout period between phases or treatments.

Tolerance to the antihypertensive effect may develop in some patients, necessitating a re-evaluation of therapy.

Other studies in patients have provided evidence of a reduction in plasma renin activity and in the excretion of aldosterone and catecholamines. The exact relationship of these pharmacologic actions to the antihypertensive effect of clonidine has not been fully elucidated.

Clonidine acutely stimulates growth hormone release in both children and adults, but does not produce a chronic elevation of growth hormone with long-term use.

Following single doses of clonidine extended-release tablets 0.17 mg, clonidine mean (S.D.) peak plasma concentrations of 0.49 (±0.09) ng/mL occurred at 7.8 (±1.7) hours. The plasma half-life of clonidine was 13.7 (±3.0) hours. There was no effect of food on the pharmacokinetic parameters. 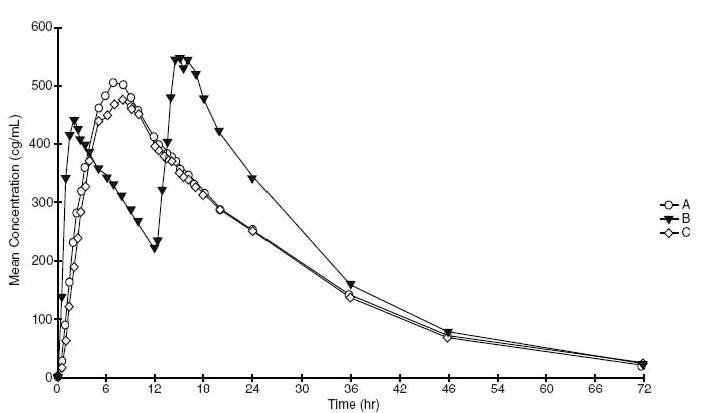 In the multi-dose study, mild to moderate hypertensive patients were randomized to ER and BID IR clonidine formulations. The following plot shows the sitting blood pressure values for each treatment group at Day 22. 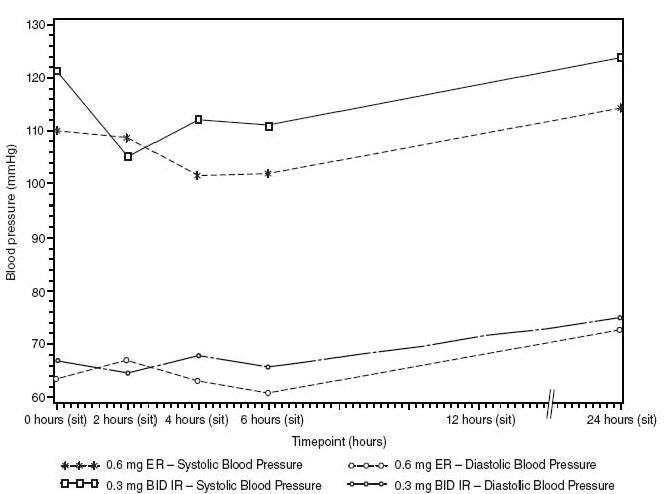 Chronic dietary administration of clonidine was not carcinogenic to rats (132 weeks) or mice (78 weeks) dosed, respectively, at up to 46 or 70 times the maximum recommended daily human dose as mg/kg (9 or 6 times the MRDHD on a mg/m 2 basis). There was no evidence of genotoxicity in the Ames test for mutagenicity or mouse micronucleus test for clastogenicity.

In several studies with oral clonidine hydrochloride, a dose-dependent increase in the incidence and severity of spontaneous retinal degeneration was seen in albino rats treated for six months or longer. Tissue distribution studies in dogs and monkeys showed a concentration of clonidine in the choroid.

In view of the retinal degeneration seen in rats, eye examinations were performed during clinical trials in 908 patients before, and periodically after, the start of clonidine therapy. In 353 of these 908 patients, the eye examinations were carried out over periods of 24 months or longer. Except for some dryness of the eyes, no drug-related abnormal ophthalmological findings were recorded and, according to specialized tests such as electroretinography and macular dazzle, retinal function was unchanged.

In combination with amitriptyline, clonidine hydrochloride administration led to the development of corneal lesions in rats within 5 days.

Clonidine Extended-Release Tablets are scored, splitable, capsule-shaped coated tablets that are supplied in bottles of 30.

Advise patients who engage in potentially hazardous activities, such as operating machinery or driving, of a possible sedative effect of clonidine. The sedative effect may be increased by concomitant use of alcohol, barbiturates, or other sedating drugs. 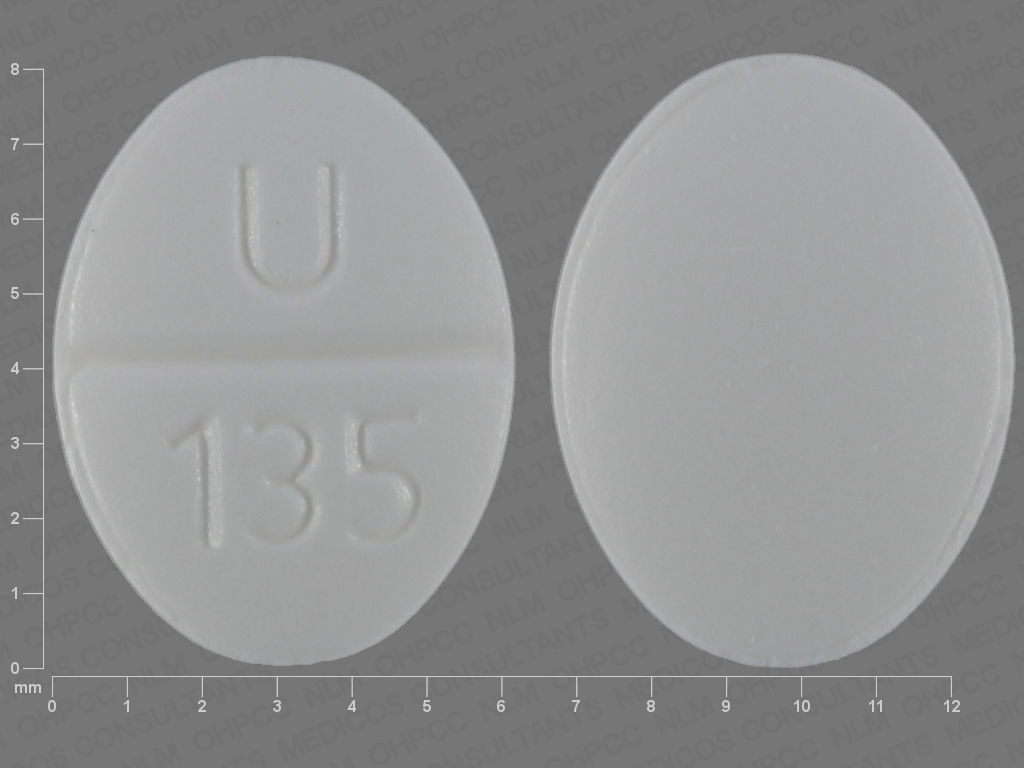