Indications and Usage for Apremilast

Apremilast tablets are indicated for the treatment of adult patients with moderate to severe plaque psoriasis who are candidates for phototherapy or systemic therapy.

The recommended initial dosage titration of Apremilast tablets from Day 1 to Day 5 is shown in Table 1. Following the 5-day titration, the recommended maintenance dosage is 30 mg twice daily taken orally starting on Day 6. This titration is intended to reduce the gastrointestinal symptoms associated with initial therapy.

Apremilast tablets can be administered without regard to meals. Do not crush, split, or chew the tablets.

Apremilast tablets dosage should be reduced to 30 mg once daily in patients with severe renal impairment (creatinine clearance (CLcr) of less than 30 mL per minute estimated by the Cockcroft–Gault equation) [see Use in Specific Populations (8.6) and Clinical Pharmacology (12.3)]. For initial dosage titration in this group, it is recommended that Apremilast tablets be titrated using only the AM schedule listed in Table 1 and the PM doses be skipped.

Apremilast tablets are contraindicated in patients with a known hypersensitivity to Apremilast or to any of the excipients in the formulation [see Adverse Reactions (6.1)].

Co-administration of strong cytochrome P450 enzyme inducer, rifampin, resulted in a reduction of systemic exposure of Apremilast, which may result in a loss of efficacy of Apremilast. Therefore, the use of cytochrome P450 enzyme inducers (e.g., rifampin, phenobarbital, carbamazepine, phenytoin) with Apremilast is not recommended [see Drug Interactions (7.1) and Clinical Pharmacology (12.3)].

The following adverse reactions are described elsewhere in the labeling:

Psoriasis Clinical Trials The safety of Apremilast was assessed in 1,426 subjects in 3 randomized, double-blind, placebo-controlled trials in adult subjects with moderate to severe plaque psoriasis who were candidates for phototherapy or systemic therapy. Subjects were randomized to receive Apremilast 30 mg twice daily or placebo twice daily. Titration was used over the first 5 days [see Dosage and Administration (2.1)]. Subjects ranged in age from 18 to 83 years, with an overall median age of 46 years.

Table 3: Adverse Reactions Reported in ≥ 1% of Subjects on Apremilast and With Greater Frequency Than in Subjects on Placebo; up to Day 112 (Week 16)

Apremilast exposure is decreased when Apremilast is co-administered with strong CYP450 inducers (such as rifampin) and may result in loss of efficacy [see Warnings and Precautions (5.3) and Clinical Pharmacology (12.3)].

There is a pregnancy exposure registry that monitors pregnancy outcomes in women exposed to Apremilast during pregnancy. Information about the registry can be obtained by calling 1-877-311-8972.

Available pharmacovigilance data with Apremilast use in pregnant women have not established a drug-associated risk of major birth defects, miscarriage or adverse maternal or fetal outcomes, but these data are extremely limited. Based on findings from animal reproduction studies, Apremilast may increase the risk for fetal loss. In animal embryo-fetal development studies, the administration of Apremilast to pregnant cynomolgus monkeys during organogenesis resulted in dose-related increases in abortion/embryo-fetal death at dose exposures 2.1-times the maximum recommended human therapeutic dose (MRHD) and no adverse effect at an exposure of 1.4-times the MRHD. When administered to pregnant mice, during organogenesis there were no Apremilast-induced malformations up to exposures 4.0-times the MRHD (see Data). Advise pregnant women of the potential risk of fetal loss. Consider pregnancy planning and prevention for females of reproductive potential.

In an embryo-fetal developmental study, pregnant cynomolgus monkeys were administered Apremilast at doses of 20, 50, 200, or 1,000 mg/kg/day during the period of organogenesis (gestation Days 20 through 50). There was a dose-related increase in spontaneous abortions, with most abortions occurring during Weeks 3 to 4 of dosing in the first trimester, at doses approximately 2.1-times the MRHD and greater (on an area under the curve [AUC] basis at doses ≥ 50 mg/kg/day). No abortifacient effects were observed at a dose approximately 1.4-times the MRHD (on an AUC basis at a dose of 20 mg/kg/day). Although, there was no evidence for a teratogenic effect at doses of 20 mg/kg/day and greater when examined at day 100, aborted fetuses were not examined.

Apremilast distributed across the placenta into the fetal compartment in mice and monkeys.

There are no data on the presence of Apremilast in human milk, the effects on the breastfed infant, or the effects on milk production. However, Apremilast was detected in the milk of lactating mice. When a drug is present in animal milk, it is likely that the drug will be present in human milk. The developmental and health benefits of breastfeeding should be considered along with the mother’s clinical need for Apremilast and any potential adverse effects on the breastfed infant from Apremilast or from the underlying maternal condition.

In mice, following a single oral administration of 10 mg/kg to dams on postpartum day 13, Apremilast concentrations in milk were approximately 1.5-times that of simultaneously collected blood samples.

The safety and effectiveness of Apremilast in pediatric patients less than18 years of age have not been established.

Apremilast pharmacokinetics were characterized in subjects with moderate (Child Pugh B) and severe (Child Pugh C) hepatic impairment. No dose adjustment is necessary in these patients.

In case of overdose, patients should seek immediate medical help. Patients should be managed by symptomatic and supportive care should there be an overdose.

The active ingredient in Apremilast tablets is Apremilast. Apremilast is a phosphodiesterase 4 (PDE4) inhibitor. Apremilast is known chemically as N-[2-[(1S)-1-(3-ethoxy-4-methoxyphenyl)-2-(methylsulfonyl)ethyl]-2,3-dihydro-1,3-dioxo-1H-isoindol-4-yl]acetamide. Its molecular formula is C22H24N2O7S and the molecular weight is 460.50 g/mol. 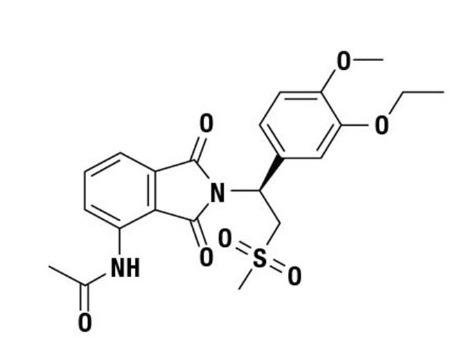 Apremilast is a white to pale yellow powder. It is soluble in acetone and practically insoluble in water.

Apremilast when taken orally is absorbed with an absolute bioavailability of ~73%, with peak plasma concentrations (Cmax) occurring at a median time (tmax) of ~2.5 hours. Co-administration with food does not alter the extent of absorption of Apremilast.

Following oral administration in humans, Apremilast is a major circulating component (45%) followed by inactive metabolite M12 (39%), a glucuronide conjugate of O-demethylated Apremilast. It is extensively metabolized in humans with up to 23 metabolites identified in plasma, urine and feces. Apremilast is metabolized by both cytochrome (CYP) oxidative metabolism with subsequent glucuronidation and non-CYP mediated hydrolysis. In vitro, CYP metabolism of Apremilast is primarily mediated by CYP3A4, with minor contributions from CYP1A2 and CYP2A6.

The plasma clearance of Apremilast is about 10 L/hr in healthy subjects, with a terminal elimination half-life of approximately 6 to 9 hours. Following oral administration of radio-labeled Apremilast, about 58% and 39% of the radioactivity is recovered in urine and feces, respectively, with about 3% and 7% of the radioactive dose recovered as Apremilast in urine and feces, respectively.

Hepatic Impairment: The pharmacokinetics of Apremilast is not affected by moderate or severe hepatic impairment.

Renal Impairment: The pharmacokinetics of Apremilast is not affected by mild or moderate renal impairment. In 8 subjects with severe renal impairment administered a single dose of 30 mg Apremilast, the AUC and Cmax of Apremilast increased by approximately 88% and 42%, respectively [see Dosage and Administration (2.2) and Use in Specific Populations (8.6)].

Gender: In pharmacokinetic studies in healthy volunteers, the extent of exposure in females was about 31% higher and Cmax was about 8% higher than that in male subjects.

No significant pharmacokinetic interactions were observed when 30-mg oral Apremilast was administered with either oral contraceptive, ketoconazole, or methotrexate. Co-administration of the CYP450 inducer rifampin (600 mg once daily for 15 days) with a single oral dose of 30-mg Apremilast resulted in reduction of Apremilast AUC and Cmax by 72% and 43%, respectively [see Warnings and Precautions (5.3) and Drug Interactions (7.1)].

Long-term studies were conducted in mice and rats with Apremilast to evaluate its carcinogenic potential. No evidence of Apremilast-induced tumors was observed in mice at oral doses up to 8.8-times the Maximum Recommended Human Dose (MRHD) on an AUC basis (1,000 mg/kg/day) or in rats at oral doses up to approximately 0.08- and 1.1-times the MRHD, (20 mg/kg/day in males and 3 mg/kg/day in females, respectively).

In a fertility study of male mice, Apremilast at oral doses up to approximately 3-times the MRHD based on AUC (up to 50 mg/kg/day) produced no effects on male fertility. In a fertility study of female mice, Apremilast was administered at oral doses of 10, 20, 40, or 80 mg/kg/day. At doses ≥ 1.8-times the MRHD (≥ 20 mg/kg/day), estrous cycles were prolonged, due to lengthening of diestrus which resulted in a longer interval until mating. Mice that became pregnant at doses of 20 mg/kg/day and greater also had increased incidences of early postimplantation losses. There was no effect of Apremilast approximately 1.0-times the MRHD (10 mg/kg/day).

Study PSOR-1 enrolled 844 subjects and Study PSOR-2 enrolled 413 subjects. In both studies, subjects were randomized 2:1 to Apremilast 30 mg BID or placebo for 16 weeks. Both studies assessed the proportion of subjects who achieved PASI-75 at Week 16 and the proportion of subjects who achieved a sPGA score of clear (0) or almost clear (1) at Week 16. Across both studies, subjects ranged in age from 18 to 83 years, with an overall median age of 46 years. The mean baseline BSA involvement was 25.19% (median 21.0%), the mean baseline PASI score was 19.07 (median 16.80), and the proportion of subjects with sPGA score of 3 (moderate) and 4 (severe) at baseline were 70.0% and 29.8%, respectively. Approximately 30% of all subjects had received prior phototherapy and 54% had received prior conventional systemic and/or biologic therapy for the treatment of psoriasis with 37% receiving prior conventional systemic therapy and 30% receiving prior biologic therapy. Approximately one-third of subjects had not received prior phototherapy, conventional systemic nor biologic therapy.

The proportion of subjects who achieved PASI-75 responses, and sPGA score of clear (0) or almost clear (1), are presented in Table 7.

Table 7: Clinical Response at Week 16 in Studies PSOR-1 and PSOR-2

The median time to loss of PASI-75 response among the subjects re-randomized to placebo at Week 32 during the Randomized Treatment Withdrawal Phase was 5.1 weeks.

Apremilast Tablets, 10 mg are supplied as pink colored, oval shaped, film-coated tablets, debossed with “C12” on one side and plain on other side.

Apremilast Tablets, 20 mg are supplied as brown colored, oval shaped, film-coated tablet, debossed with "C13” on one side and plain on other side.

Apremilast Tablets, 30 mg are supplied as beige colored, oval shaped, film-coated tablets, debossed with “C14" on one side and plain on other side.

Tablets are supplied in the following strengths and package configurations:

Inform patients that there is a pregnancy registry for pregnant women who have taken Apremilast tablets during pregnancy. Advise patients to contact the registry at 1-877-311-8972 to enroll [see Use in Specific Populations (8.1)]. Advise pregnant women and females of reproductive potential of the potential risk to a fetus. Advise females to inform their prescriber of a known or suspected pregnancy. 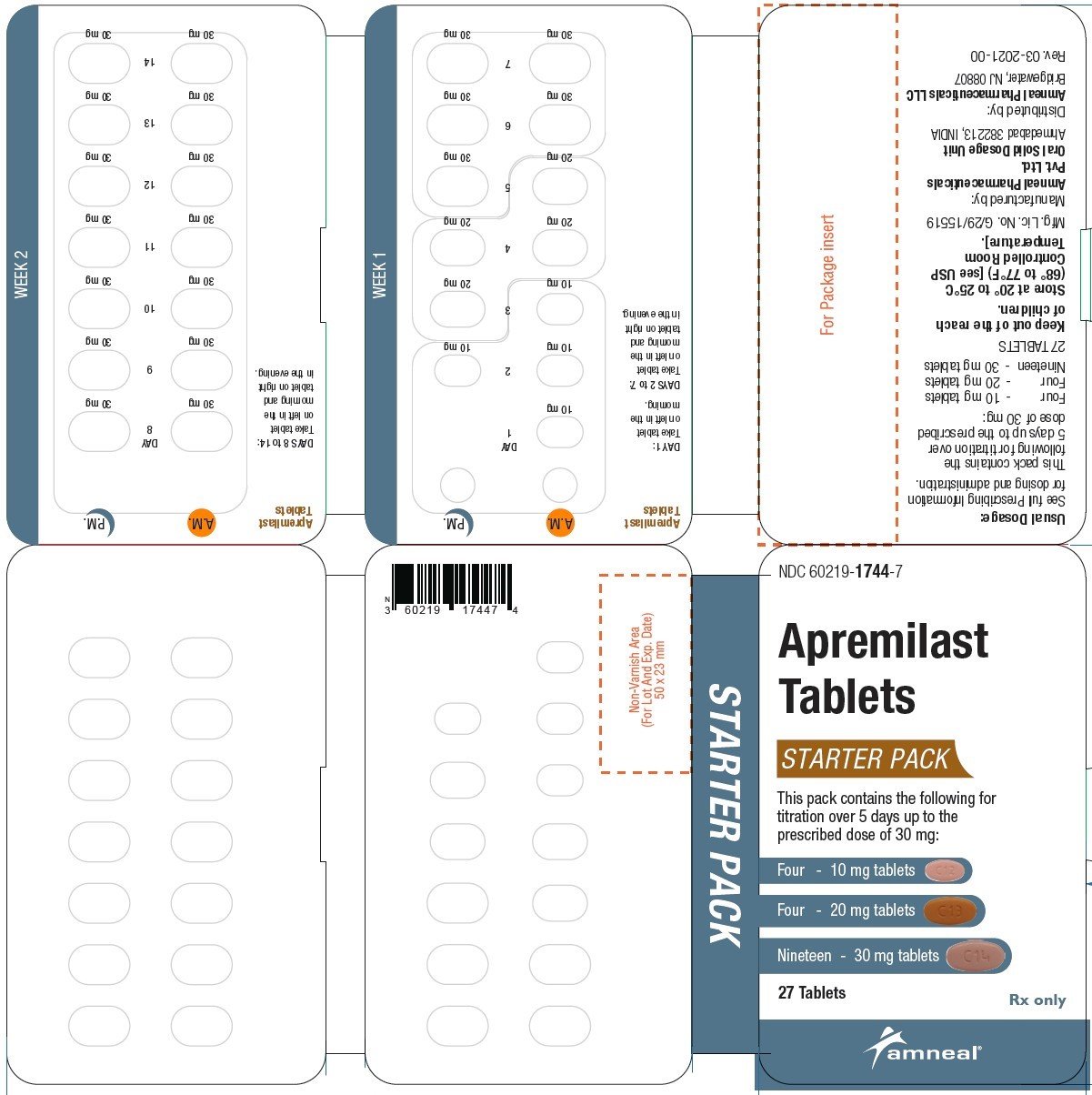 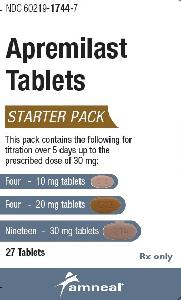