APA states that effectiveness of antidepressants is generally comparable between and within classes of medications, including SSRIs, SNRIs, TCAs, MAO inhibitors, and other antidepressants (e.g., bupropion, mirtazapine, trazodone). Choose antidepressant based mainly on the following factors: patient preference; nature of prior response to medication; safety, tolerability, and anticipated adverse effects; concurrent psychiatric and medical conditions; specific properties of the medication (e.g., half-life, actions on CYP isoenzymes, other drug interactions); and cost. For most patients, an SSRI, SNRI, mirtazapine, or bupropion is considered optimal. Consult APA’s Practice Guidelines for the Treatment of Patients with Major Depressive Disorder (at [Web]) for additional information.

Levomilnacipran is the more active 1S,2R-enantiomer of racemic milnacipran (Savella), which is FDA-labeled for use in the management of fibromyalgia.

Manufacturer states that levomilnacipran (Fetzima) is not approved for the management of fibromyalgia† [off-label]; efficacy and safety of the drug for this use not established.

Initially, 20 mg once daily for 2 days, followed by an increase to 40 mg once daily. Depending on efficacy and tolerability, may increase daily dosage in 40-mg increments at intervals of ≥2 days. May use the levomilnacipran (Fetzima) titration pack for initial 1-month titration period. In a short-term, flexible-dose clinical study, 21, 34, and 44% of the patients were receiving 40, 80, or 120 mg of levomilnacipran once daily, respectively, at the end of the treatment period; the mean daily dosage was approximately 73 mg.

If used with a potent CYP3A4 inhibitor, dosage should not exceed 80 mg once daily. (See Interactions.)

Dosage adjustment based on gender not necessary.

Possible worsening of depression and/or the emergence of suicidal ideation and behavior (suicidality) or unusual changes in behavior in both adult and pediatric patients with major depressive disorder, whether or not they are taking antidepressants; may persist until clinically important remission occurs. (See Boxed Warning and also see Pediatric Use under Cautions.) However, suicide is a known risk of depression and certain other psychiatric disorders, and these disorders themselves are the strongest predictors of suicide.

Appropriately monitor and closely observe patients receiving levomilnacipran for any reason, particularly during initiation of therapy (i.e., the first few months) and during periods of dosage adjustments.

Anxiety, agitation, panic attacks, insomnia, irritability, hostility, aggressiveness, impulsivity, akathisia, hypomania, and/or mania may be precursors to emerging suicidality. Consider changing or discontinuing therapy in patients whose depression is persistently worse or in those with emerging suicidality or symptoms that might be precursors to worsening depression or suicidality, particularly if severe, abrupt in onset, or were not part of the patient’s presenting symptoms. If a decision is made to discontinue therapy, taper levomilnacipran dosage as rapidly as is feasible but consider risks of abrupt discontinuance. (See Withdrawal of Therapy under Cautions.)

Concurrent or recent (i.e., within 2 weeks) therapy with MAO inhibitors intended to treat psychiatric disorders is contraindicated. Do not initiate levomilnacipran in patients treated with other MAO inhibitors such as linezolid or IV methylene blue. (See Specific Drugs under Interactions.)

Possible increased BP with SNRIs, including levomilnacipran. Orthostatic hypotension also reported. Effects of levomilnacipran on BP in patients with clinically important hypertension or cardiovascular disease not evaluated; use with caution.

Concurrent use of levomilnacipran with other drugs that increase BP and heart rate not evaluated; use with caution. (See Specific Drugs under Interactions.)

If sustained increase in BP occurs during therapy, consider levomilnacipran discontinuance or other appropriate medical intervention.

Increased heart rate reported with SNRIs, including levomilnacipran. Use in patients with cardiac rhythm disorders not systematically evaluated.

Concurrent use of levomilnacipran with other drugs that increase BP and heart rate not evaluated; use with caution. (See Specific Drugs under Interactions.)

Monitor heart rate prior to and periodically during therapy. If sustained increase in heart rate occurs during therapy, consider levomilnacipran discontinuance or other appropriate medical intervention.

Possible increased risk of bleeding with SSRIs and SNRIs, including levomilnacipran; events ranged from ecchymoses, hematomas, epistaxis, and petechiae to life-threatening hemorrhages. Concurrent use of aspirin, NSAIAs, warfarin, or other anticoagulants may increase risk. (See Drugs Affecting Hemostasis and Specific Drugs under Interactions and also see Advice to Patients.)

Pupillary dilation (mydriasis) occurs with many antidepressants, including levomilnacipran, and may trigger an acute attack of angle-closure glaucoma (narrow-angle glaucoma) in patients with anatomically narrow angles who do not have a patent iridectomy. (See Advice to Patients.)

SNRIs, including levomilnacipran, may affect urethral resistance. Use with caution in patients prone to obstructive urinary disorders.

Possible activation of mania and hypomania; use with caution in patients with personal or family history of bipolar disorder, mania, or hypomania.

Possible complications, sometimes severe and requiring prolonged hospitalization, respiratory support, enteral nutrition, and other forms of supportive care, in neonates exposed to SSRIs or SNRIs late in the third trimester; may arise immediately upon delivery.

Consult joint APA and ACOG guidelines (at [Web]) for additional information on management of depression in women prior to conception and during pregnancy, including treatment algorithms.

Safety and efficacy not established in pediatric patients; not recommended for use in such patients.

FDA warns that a greater risk of suicidal thinking or behavior (suicidality) occurred during the first few months of antidepressant treatment compared with placebo in children and adolescents with major depressive disorder, obsessive-compulsive disorder (OCD), or other psychiatric disorders based on pooled analyses of 24 short-term, placebo-controlled trials of 9 antidepressant drugs (SSRIs and others). However, a later meta-analysis of 27 placebo-controlled trials of 9 antidepressants (SSRIs and others) in patients <19 years of age with major depressive disorder, OCD, or non-OCD anxiety disorders suggests that the benefits of antidepressant therapy in treating these conditions may outweigh the risks of suicidal behavior or suicidal ideation. No suicides occurred in these pediatric trials.

Carefully consider these findings when assessing potential benefits and risks of levomilnacipran in a child or adolescent for any clinical use. (See Boxed Warning and also see Worsening of Depression and Suicidality Risk under Cautions.)

In clinical trials with levomilnacipran, 2.8% of patients were ≥65 years of age.

SSRIs and SNRIs, including levomilnacipran, associated with clinically important hyponatremia in geriatric patients, who may be at greater risk for this adverse effect. (See Hyponatremia/SIADH under Cautions.)

Use not recommended in patients with end-stage renal disease.

Because of levomilnacipran's large volume of distribution, hemodialysis not expected to reduce plasma concentrations of the drug.

Levomilnacipran is not a substrate or inhibitor of breast cancer resistance protein (BCRP), organic anion-transporting polypeptides (OATP) 1B1 and 1B3, organic cation transporter (OCT) 2, and organic anion transporters (OAT) 1 and 3. No dosage adjustment is necessary when levomilnacipran is used concomitantly with a substrate or inhibitor of BCRP, OATP1B1, OATP1B3, OAT1, OAT3, or OCT2.

Levomilnacipran is a weak substrate of P-gp, but does not inhibit P-gp. No dosage adjustment of concomitantly administered P-gp substrates recommended.

Potential increased risk of bleeding if used concurrently with drugs that affect coagulation or bleeding; use with caution. (See Abnormal Bleeding under Cautions.)

Concurrent use of levomilnacipran with other drugs that increase BP and heart rate not evaluated; use with caution. (See Elevated Blood Pressure and Elevated Heart Rate under Cautions.)

Interconversion between levomilnacipran and its stereoisomer does not appear to occur in humans.

Administration with food does not substantially affect levomilnacipran concentrations.

Because of large volume of distribution, hemodialysis not expected to reduce plasma concentrations. 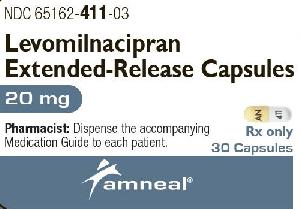