Hodgkin's lymphoma is a type of cancer that affects the lymphatic system, which is part of the body's germ-fighting immune system. In Hodgkin's lymphoma, white blood cells called lymphocytes grow out of control, causing swollen lymph nodes and growths throughout the body. 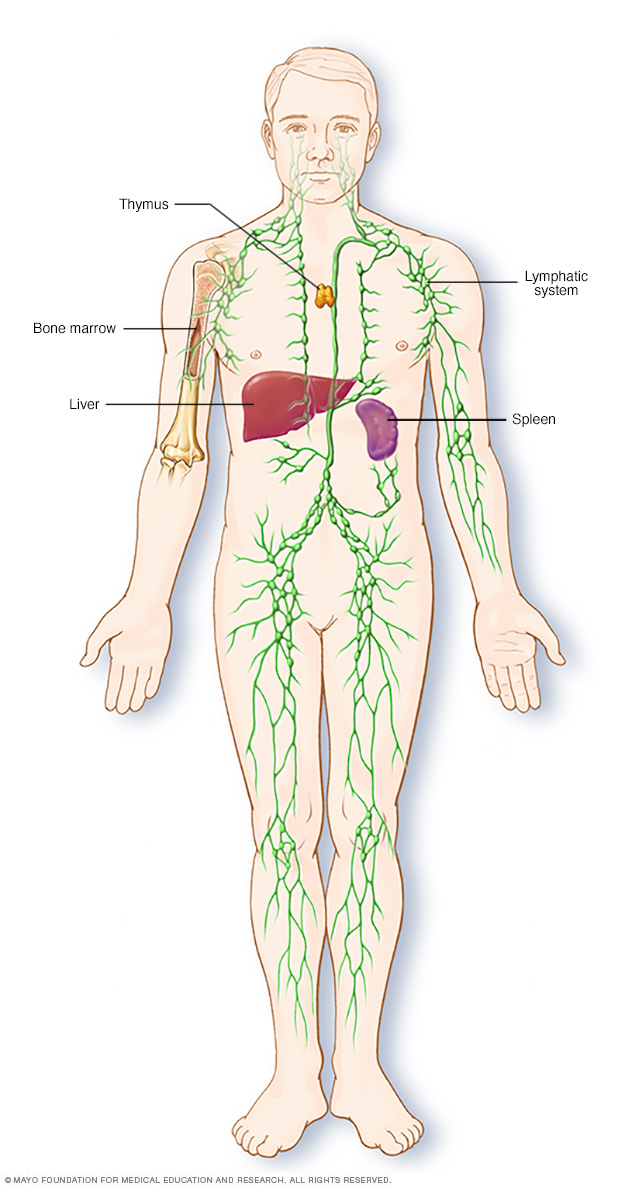 Parts of the immune system 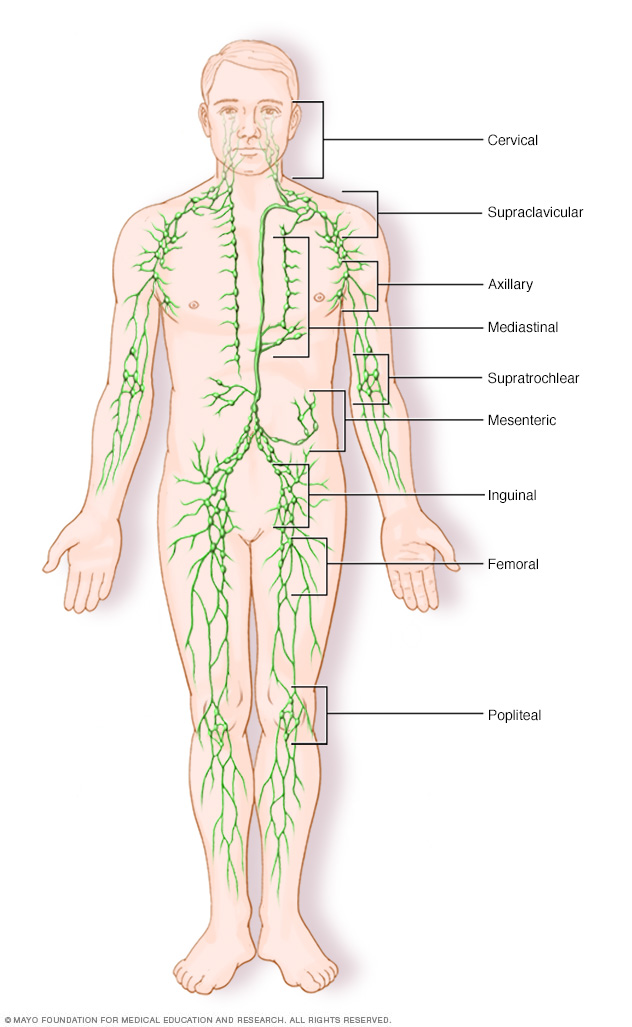 Lymph nodes are bean-sized collections of lymphocytes. Hundreds of these nodes cluster throughout the lymphatic system, for example, near the knee, groin, neck and armpits. The nodes are connected by a network of lymphatic vessels.

Signs and symptoms of Hodgkin's lymphoma may include:

Make an appointment with your health care provider if you have any persistent signs or symptoms that worry you. 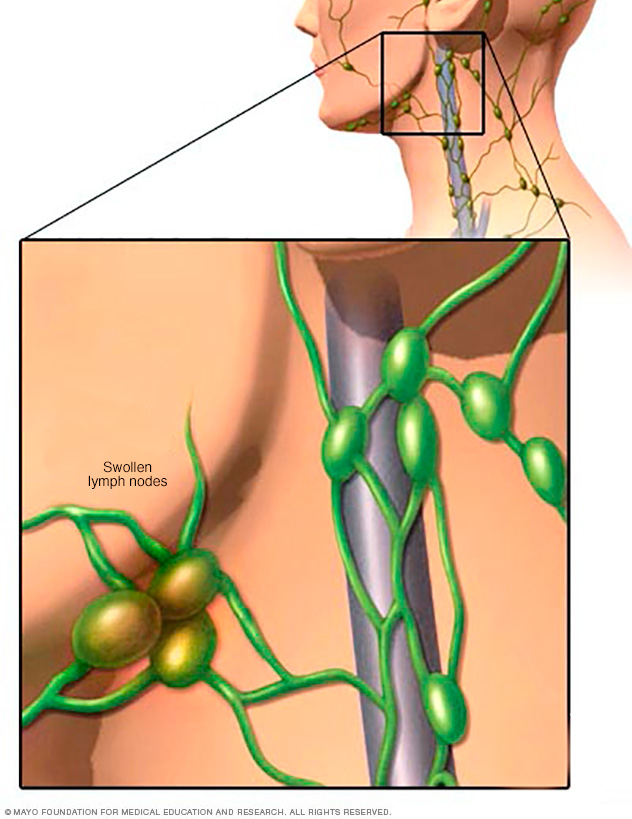 Doctors aren't sure what causes Hodgkin's lymphoma. They know that it begins when infection-fighting white blood cells called lymphocytes develop changes in their DNA. A cell's DNA contains the instructions that tell a cell what to do.

The DNA changes tell the cells to multiply rapidly and to continue living when other cells would naturally die. The lymphoma cells attract many healthy immune system cells to protect them and help them grow. The extra cells crowd into the lymph nodes and cause swelling and other Hodgkin's lymphoma signs and symptoms.

There are multiple types of Hodgkin's lymphoma. Your type is based on the characteristics of the cells involved in your disease and their behavior. The type of lymphoma you have helps determines your treatment options.

Classical Hodgkin's lymphoma is the more common type of this disease. People diagnosed with this type have large lymphoma cells called Reed-Sternberg cells in their lymph nodes.

Subtypes of classical Hodgkin's lymphoma include:

This much rarer type of Hodgkin's lymphoma involves lymphoma cells that are sometimes called popcorn cells because of their appearance. Nodular lymphocyte-predominant Hodgkin's lymphoma is usually diagnosed at an early stage and may require less intensive treatments compared to the classical type of the disease.

Factors that can increase the risk of Hodgkin's lymphoma include:

Tests and procedures used to diagnose Hodgkin's lymphoma include:

Other tests and procedures may be used depending on your situation.

Your health care team uses the results of your tests to assign your Hodgkin's lymphoma a stage. Your stage is helpful for understanding the seriousness of your condition and determining which treatments are most likely to help you.

Hodgkin's lymphoma staging uses the numbers 1 to 4 to indicate the stage. A lower number indicates an earlier stage cancer that's more likely to be cured. A higher number means the cancer is more advanced.

Sometimes Hodgkin's lymphoma stages also include the letters A and B. The letter A means that you don't have worrying symptoms of cancer. The letter B means that you have some signs and symptoms, such as a persistent fever, unexplained weight loss and night sweats. 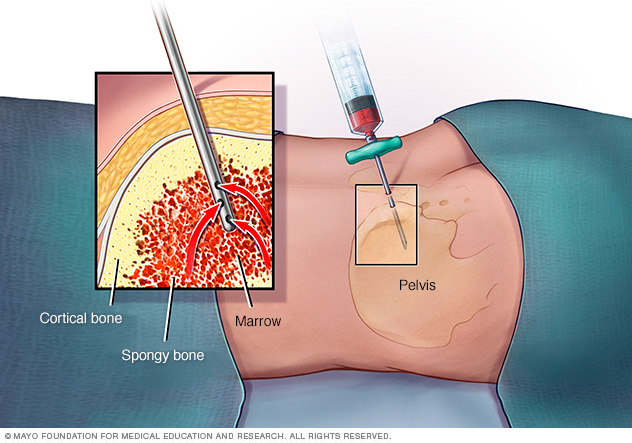 In a bone marrow aspiration, a health care provider uses a thin needle to remove a small amount of liquid bone marrow, usually from a spot in the back of your hipbone (pelvis). A bone marrow biopsy is often done at the same time. This second procedure removes a small piece of bone tissue and the enclosed marrow.

The goal of Hodgkin's lymphoma treatment is to destroy as many of the lymphoma cells as possible and bring the disease into remission. Which treatments are right for you depends on the type and stage of your cancer, your overall health, and your preferences.

Chemotherapy is a drug treatment that uses chemicals to kill lymphoma cells. Chemotherapy drugs travel through your bloodstream and can reach nearly all areas of your body. Chemotherapy drugs can be taken in pill form or through a vein in your arm, or sometimes both methods of administration are used.

Classical Hodgkin's lymphoma treatment usually begins with chemotherapy. It may be the only treatment needed or it may be combined with radiation therapy.

Side effects of chemotherapy depend on the drugs you're given. Common side effects are nausea and hair loss. Serious long-term complications can occur, such as heart disease, lung damage, fertility problems and other cancers.

Radiation therapy uses high-energy beams, such as X-rays and protons, to kill cancer cells. During radiation therapy, you lie on a table and a large machine moves around you, directing the energy beams to specific points on your body.

For Hodgkin's lymphoma treatment, radiation can be aimed at affected lymph nodes and the nearby areas where the disease might spread. It's usually used with chemotherapy. For people with early-stage nodular lymphocyte-predominant Hodgkin's lymphoma, radiation therapy may be the only treatment needed.

During a bone marrow transplant, your own blood stem cells are removed, frozen and stored for later use. Next you receive high-dose chemotherapy and radiation therapy to destroy cancerous cells in your body. Finally your stem cells are thawed and put back in your body where they help build healthy bone marrow.

Other drugs that are sometimes used to treat Hodgkin's lymphoma include:

No alternative medicines have been found to treat Hodgkin's lymphoma. But alternative medicine may help you cope with the stress of a cancer diagnosis and the side effects of cancer treatment. Talk with your health care provider about your options, such as:

A Hodgkin's lymphoma diagnosis can be challenging. The following strategies and resources may help you cope with your diagnosis:

Make an appointment with your health care provider if you have any signs or symptoms that worry you. If your provider suspects that you have a type of lymphoma, he or she may refer you to a doctor who specializes in diseases that affect the blood cells (hematologist).

Because appointments can be brief, and because there's often a lot of information to discuss, it's a good idea to be well prepared. Here's some information to help you get ready.

Your time with your health care provider is limited, so preparing a list of questions can help you make the most of your time together. List your questions from most important to least important, in case time runs out. For Hodgkin's lymphoma, some basic questions to ask include:

In addition to the questions that you've prepared, don't hesitate to ask additional questions.

What to expect from your provider

Your health care provider is likely to ask you a number of questions. Being ready to answer them may reserve time to go over points you want to spend more time on. Your provider may ask: