Etopophos is indicated, in combination with other chemotherapeutic drugs, for treatment of patients with refractory testicular tumors.

Etopophos is indicated, in combination with cisplatin, for first-line treatment of patients with small cell lung cancer.

The recommended dose of Etopophos is:

The recommended dose of Etopophos is:

In patients with a creatinine clearance (CLcr) 15-50 mL/min, administer 75% of the recommended dose.
Data are not available in patients with CLcr less than 15 mL/min. Consider further dose reduction in these patients.

Storage
After reconstitution, store under the following conditions:

Administration
DO NOT GIVE Etopophos BY BOLUS INTRAVENOUS INJECTION. Etopophos solutions may be administered at infusion rates up to 3.5 hours. Extravasation of Etopophos may result in swelling, pain, cellulitis, and necrosis including skin necrosis.

Etopophos is a cytotoxic drug. Follow applicable special handling and disposal procedures.1 To minimize the risk of dermal exposure, use of gloves is recommended. If dermal contact occurs, immediately and thoroughly wash areas of skin contact with soap and water and flush mucosa with water.

Etopophos is contraindicated in patients with a history of a severe hypersensitivity reaction to etoposide products [see Warnings and Precautions (5.3)].

Etopophos causes myelosuppression that results in thrombocytopenia and neutropenia. Fatal infections and bleeding have occurred. Obtain complete blood counts prior to each cycle of Etopophos and more frequently as clinically indicated [see Adverse Reactions (6.1)].

Secondary leukemias have occurred with long term use of Etopophos.

Based on animal studies and its mechanism of action, Etopophos can cause fetal harm when administered to a pregnant woman. Advise pregnant women of the potential hazard to the fetus [see Use in Specific Populations (8.1)].

Etopophos has been used as a single agent in clinical studies involving 206 patients with a variety of malignancies (including one non-Hodgkin’s lymphoma) and in combination with cisplatin in 60 patients with small cell lung cancer. The most common adverse reaction was neutropenia.

The following adverse reactions have been identified during postapproval use of Etopophos. Because these reactions are reported voluntarily from a population of uncertain size, it is not always possible to reliably estimate their frequency or establish a causal relationship to drug exposure.

Risk Summary
Based on animal data and its mechanism of action, Etopophos can cause fetal harm when administered to a pregnant woman. Etoposide, the active moiety of etoposide phosphate is teratogenic in mice and rats (see Data). Advise pregnant women of the potential hazard to a fetus.
Advise women of childbearing potential to avoid becoming pregnant.
In the U.S. general population, the estimated background risk of major birth defects and miscarriage in clinically recognized pregnancies is 2% to 4% and 15% to 20%, respectively.

Data
Animal Data
In rats, an intravenous etoposide dose of 0.4 mg/kg/day (about 0.05 times of the 50 mg/m2 human dose based on body surface area [BSA]) during organogenesis caused maternal toxicity, embryotoxicity, and teratogenicity (skeletal abnormalities, exencephaly, encephalocele, and anophthalmia); higher doses of 1.2 and 3.6 mg/kg/day (about 0.14 and 0.5 times the 50 mg/m2 human dose based on BSA) resulted in 90% and 100% embryonic resorptions. In mice, a single etoposide dose of 1.0 mg/kg (approximately 0.06 times the 50 mg/m2 human dose based on BSA) administered intraperitoneally on days 6, 7, or 8 of gestation caused embryotoxicity, cranial abnormalities, and major skeletal malformations. An intraperitoneal dose of 1.5 mg/kg (about 0.1 times the 50 mg/m2 human based on BSA) on day 7 of gestation caused an increase in the incidence of intrauterine death and fetal malformations and a significant decrease in the average fetal body weight [see Nonclinical Toxicology (13.1)].

There is no information regarding the presence of etoposide in human milk or its effects on breastfed infant milk production. Because of the potential for serious adverse reactions in nursing infants from Etopophos, advise women not to breastfeed during treatment with Etopophos.

Infertility
Females
In females of reproductive potential, Etopophos may cause infertility and result in amenorrhea. Premature menopause can occur with Etopophos. Recovery of menses and ovulation is related to age at treatment.
Males
In male patients, Etopophos may result in oligospermia, azoospermia, and permanent loss of fertility. Sperm counts have been reported to return to normal levels in some men, and in some cases, have occurred several years after the end of therapy [See Nonclinical Toxicology (13.1)].

Clinical studies of etoposide did not include sufficient numbers (n=71) of patients aged 65 years and over to determine whether they respond differently from younger patients. Other reported clinical experience has not identified differences in responses between elderly and younger patients.

No antidote has been established for Etopophos overdosage in humans. Based on animal studies, overdosage may result in neurotoxicity.

Etoposide phosphate has the following structure: 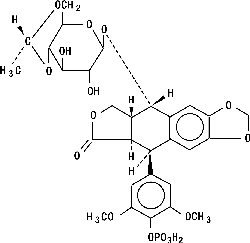 Etoposide phosphate is a prodrug that is converted to its active moiety, etoposide, by dephosphorylation. Etoposide causes the induction of DNA strand breaks by an interaction with DNA-topoisomerase II or the formation of free radicals, leading to cell cycle arrest, primarily at the G2 stage of the cell cycle, and cell death.

Distribution
Following administration of an injectable etoposide formulation, the mean volume of distribution of etoposide at steady state was 18 to 29 liters.
Etoposide enters the CSF poorly.
In vitro, etoposide is 97% bound to human plasma proteins, primarily albumin.

Elimination
The terminal elimination half-life of etoposide ranges from 4 to 11 hours. Total body clearance values range from 33 to 48 mL/min.

Metabolism
Following intravenous administration of Etopophos, etoposide phosphate is completely converted to etoposide in plasma. Etoposide is metabolized by opening of the lactone ring, O-demethylation, and conjugation (i.e., glucuronidation and sulfation). O-demethylation occurs through the CYP450 3A4 isoenzyme pathway to produce the active catechol metabolite.

Specific Populations
Following intravenous administration of etoposide in adults, the total body clearance of etoposide was correlated with creatinine clearance, serum albumin concentration, and non-renal clearance. No clinically significant differences in the pharmacokinetics of etoposide were observed based on age and sex.

How Supplied/Storage
Etopophos is supplied as a single-dose vial containing etoposide phosphate equivalent to 100 mg etoposide as a lyophilized powder for reconstitution, individually packaged in a carton:
NDC 61269-410-20
Store unopened vials at 2° to 8°C (36°-46°F). Keep vial in outer carton to protect from light.

See How Supplied section for a complete list of available packages of Etopophos.