Chronic obstructive pulmonary disease (COPD) is a chronic inflammatory lung disease that causes obstructed airflow from the lungs. Symptoms include breathing difficulty, cough, mucus (sputum) production and wheezing. It's typically caused by long-term exposure to irritating gases or particulate matter, most often from cigarette smoke. People with COPD are at increased risk of developing heart disease, lung cancer and a variety of other conditions.

Emphysema and chronic bronchitis are the two most common conditions that contribute to COPD. These two conditions usually occur together and can vary in severity among individuals with COPD.

Chronic bronchitis is inflammation of the lining of the bronchial tubes, which carry air to and from the air sacs (alveoli) of the lungs. It's characterized by daily cough and mucus (sputum) production.

Emphysema is a condition in which the alveoli at the end of the smallest air passages (bronchioles) of the lungs are destroyed as a result of damaging exposure to cigarette smoke and other irritating gases and particulate matter.

Although COPD is a progressive disease that gets worse over time, COPD is treatable. With proper management, most people with COPD can achieve good symptom control and quality of life, as well as reduced risk of other associated conditions.

Signs and symptoms of COPD may include:

People with COPD are also likely to experience episodes called exacerbations, during which their symptoms become worse than the usual day-to-day variation and persist for at least several days.

Talk to your doctor if your symptoms are not improving with treatment or getting worse, or if you notice symptoms of an infection, such as fever or a change in sputum.

Seek immediate medical care if you can't catch your breath, if you experience severe blueness of your lips or fingernail beds (cyanosis) or a rapid heartbeat, or if you feel foggy and have trouble concentrating.

The main cause of COPD in developed countries is tobacco smoking. In the developing world, COPD often occurs in people exposed to fumes from burning fuel for cooking and heating in poorly ventilated homes.

Only some chronic smokers develop clinically apparent COPD, although many smokers with long smoking histories may develop reduced lung function. Some smokers develop less common lung conditions. They may be misdiagnosed as having COPD until a more thorough evaluation is performed.

How your lungs are affected

Air travels down your windpipe (trachea) and into your lungs through two large tubes (bronchi). Inside your lungs, these tubes divide many times — like the branches of a tree — into many smaller tubes (bronchioles) that end in clusters of tiny air sacs (alveoli).

The air sacs have very thin walls full of tiny blood vessels (capillaries). The oxygen in the air you inhale passes into these blood vessels and enters your bloodstream. At the same time, carbon dioxide — a gas that is a waste product of metabolism — is exhaled.

Your lungs rely on the natural elasticity of the bronchial tubes and air sacs to force air out of your body. COPD causes them to lose their elasticity and over-expand, which leaves some air trapped in your lungs when you exhale.

Causes of airway obstruction include:

Cigarette smoke and other irritants

In the vast majority of people with COPD, the lung damage that leads to COPD is caused by long-term cigarette smoking. But there are likely other factors at play in the development of COPD, such as a genetic susceptibility to the disease, because not all smokers develop COPD.

Other irritants can cause COPD, including cigar smoke, secondhand smoke, pipe smoke, air pollution, and workplace exposure to dust, smoke or fumes.

In about 1% of people with COPD, the disease results from a genetic disorder that causes low levels of a protein called alpha-1-antitrypsin (AAt). AAt is made in the liver and secreted into the bloodstream to help protect the lungs. Alpha-1-antitrypsin deficiency can cause liver disease, lung disease or both.

For adults with COPD related to AAt deficiency, treatment options include those used for people with more-common types of COPD. In addition, some people can be treated by replacing the missing AAt protein, which may prevent further damage to the lungs. 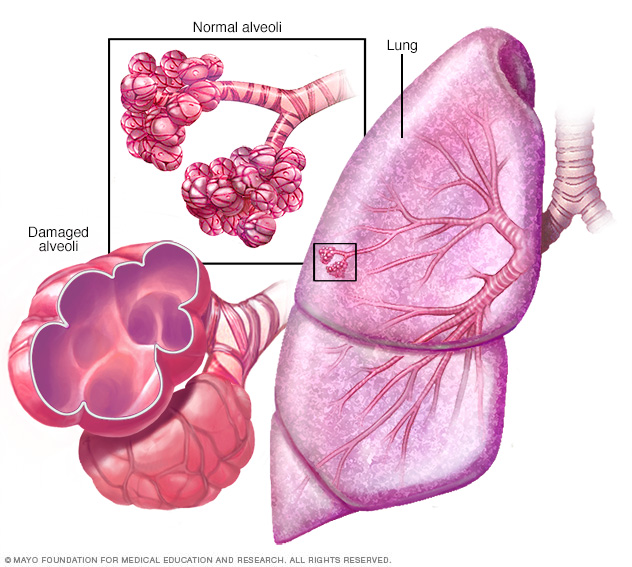 In emphysema, the inner walls of the lungs' air sacs (alveoli) are damaged, causing them to eventually rupture. This creates one larger air space instead of many small ones and reduces the surface area available for gas exchange. 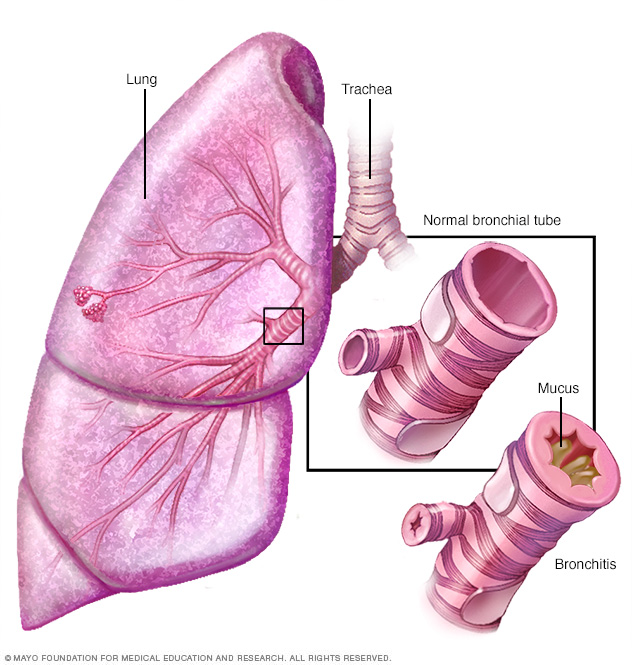 Bronchitis is an inflammation of the lining of your bronchial tubes, which carry air to and from your lungs. People who have bronchitis often cough up thickened mucus, which can be discolored.

Risk factors for COPD include:

COPD can cause many complications, including:

Unlike some diseases, COPD typically has a clear cause and a clear path of prevention, and there are ways to slow the progression of the disease. The majority of cases are directly related to cigarette smoking, and the best way to prevent COPD is to never smoke — or to stop smoking now.

If you're a longtime smoker, these simple statements may not seem so simple, especially if you've tried quitting — once, twice or many times before. But keep trying to quit. It's critical to find a tobacco cessation program that can help you quit for good. It's your best chance for reducing damage to your lungs.

Occupational exposure to chemical fumes and dusts is another risk factor for COPD. If you work with these types of lung irritants, talk to your supervisor about the best ways to protect yourself, such as using respiratory protective equipment.

Here are some steps you can take to help prevent complications associated with COPD:

COPD is commonly misdiagnosed. Many people who have COPD may not be diagnosed until the disease is advanced. 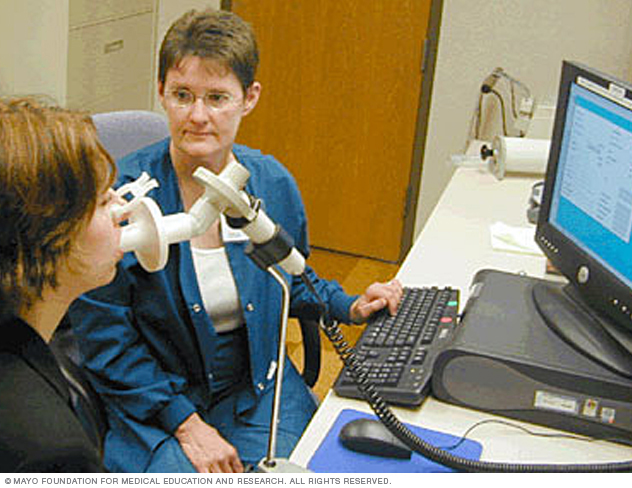 A spirometer is a diagnostic device that measures the amount of air you're able to breathe in and out and the time it takes you to exhale completely after you take a deep breath.

Many people with COPD have mild forms of the disease for which little therapy is needed other than smoking cessation. Even for more advanced stages of disease, effective therapy is available that can control symptoms, slow progression, reduce your risk of complications and exacerbations, and improve your ability to lead an active life.

The most essential step in any treatment plan for COPD is to quit all smoking. Stopping smoking can keep COPD from getting worse and reducing your ability to breathe. But quitting smoking isn't easy. And this task may seem particularly daunting if you've tried to quit and have been unsuccessful.

Talk to your doctor about nicotine replacement products and medications that might help, as well as how to handle relapses. Your doctor may also recommend a support group for people who want to quit smoking. Also, avoid secondhand smoke exposure whenever possible.

Several kinds of medications are used to treat the symptoms and complications of COPD. You may take some medications on a regular basis and others as needed.

Bronchodilators are medications that usually come in inhalers — they relax the muscles around your airways. This can help relieve coughing and shortness of breath and make breathing easier. Depending on the severity of your disease, you may need a short-acting bronchodilator before activities, a long-acting bronchodilator that you use every day or both.

Examples of short-acting bronchodilators include:

Examples of long-acting bronchodilators include:

Inhaled corticosteroid medications can reduce airway inflammation and help prevent exacerbations. Side effects may include bruising, oral infections and hoarseness. These medications are useful for people with frequent exacerbations of COPD. Examples of inhaled steroids include:

Some medications combine bronchodilators and inhaled steroids. Examples of these combination inhalers include:

Combination inhalers that include more than one type of bronchodilator also are available. Examples of these include:

For people who experience periods when their COPD becomes more severe, called moderate or severe acute exacerbation, short courses (for example, five days) of oral corticosteroids may prevent further worsening of COPD. However, long-term use of these medications can have serious side effects, such as weight gain, diabetes, osteoporosis, cataracts and an increased risk of infection.

A medication approved for people with severe COPD and symptoms of chronic bronchitis is roflumilast (Daliresp), a phosphodiesterase-4 inhibitor. This drug decreases airway inflammation and relaxes the airways. Common side effects include diarrhea and weight loss.

When other treatment has been ineffective or if cost is a factor, theophylline (Elixophyllin, Theo-24, Theochron), a less expensive medication, may help improve breathing and prevent episodes of worsening COPD. Side effects are dose related and may include nausea, headache, fast heartbeat and tremor, so tests are used to monitor blood levels of the medication.

Respiratory infections, such as acute bronchitis, pneumonia and influenza, can aggravate COPD symptoms. Antibiotics help treat episodes of worsening COPD, but they aren't generally recommended for prevention. Some studies show that certain antibiotics, such as azithromycin (Zithromax), prevent episodes of worsening COPD, but side effects and antibiotic resistance may limit their use.

Doctors often use these additional therapies for people with moderate or severe COPD:

Evidence supports in-hospital use of breathing devices such as bilevel positive airway pressure (BiPAP), but some research now supports the benefit of its use at home. A noninvasive ventilation therapy machine with a mask helps to improve breathing and decrease retention of carbon dioxide (hypercapnia) that may lead to acute respiratory failure and hospitalization. More research is needed to determine the best ways to use this therapy.

Even with ongoing treatment, you may experience times when symptoms become worse for days or weeks. This is called an acute exacerbation, and it may lead to lung failure if you don't receive prompt treatment.

Exacerbations may be caused by a respiratory infection, air pollution or other triggers of inflammation. Whatever the cause, it's important to seek prompt medical help if you notice a sustained increase in coughing or a change in your mucus, or if you have a harder time breathing.

When exacerbations occur, you may need additional medications (such as antibiotics, steroids or both), supplemental oxygen or treatment in the hospital. Once symptoms improve, your doctor can talk with you about measures to prevent future exacerbations, such as quitting smoking; taking inhaled steroids, long-acting bronchodilators or other medications; getting your annual flu vaccine; and avoiding air pollution whenever possible.

Surgery is an option for some people with some forms of severe emphysema who aren't helped sufficiently by medications alone. Surgical options include:

If you have COPD, you can take steps to feel better and slow the damage to your lungs:

Living with COPD can be a challenge — especially as it becomes harder to catch your breath. You may have to give up some activities you previously enjoyed. Your family and friends may have difficulty adjusting to some of the changes.

It can help to share your fears and feelings with your family, friends and doctor. You may also want to consider joining a support group for people with COPD. And you may benefit from counseling or medication if you feel depressed or overwhelmed.

If your primary care provider suspects that you have COPD, you'll likely be referred to a pulmonologist — a doctor who specializes in lung disorders.

You might want to have a friend or family member accompany you to your appointment. Often, two sets of ears are better than one when you're learning about a complicated medical problem, such as COPD. Take notes if this helps.

Your doctor is likely to ask questions, such as:

Your doctor will ask additional questions based on your responses, symptoms and needs. Preparing and anticipating questions will help you make the most of your time with the doctor.