Enbrel: 7 things you should know

Enbrel is a subcutaneous injection that is usually self-administered once or twice a week for inflammatory conditions such as rheumatoid arthritis, psoriasis, psoriatic arthritis, or ankylosing spondylitis. Injection site reactions and upper respiratory tract infections are the most common side effects reported.

Medicines that interact with Enbrel may either decrease its effect, affect how long it works for, increase side effects, or have less of an effect when taken with Enbrel. An interaction between two medications does not always mean that you must stop taking one of the medications; however, sometimes it does. Speak to your doctor about how drug interactions should be managed.

Enbrel interacts with over 387 medications; most of these interactions are considered major or moderate. Common medications that may interact with Enbrel include:

People with significant exposure to the varicella virus should temporarily discontinue Enbrel and be considered for prophylactic treatment with varicella zoster immune globulin.

May be taken with antibiotics if a doctor has prescribed them for people with a current bacterial infection. However, if a person develops a serious infection or sepsis, a doctor may choose to stop Enbrel, either temporarily or permanently, while the person is receiving treatment for the infection.

Note that this list is not all-inclusive and includes only common medications that may interact with Enbrel. You should refer to the prescribing information for Enbrel for a complete list of interactions.

Remember, keep this and all other medicines out of the reach of children, never share your medicines with others, and use Enbrel only for the indication prescribed. 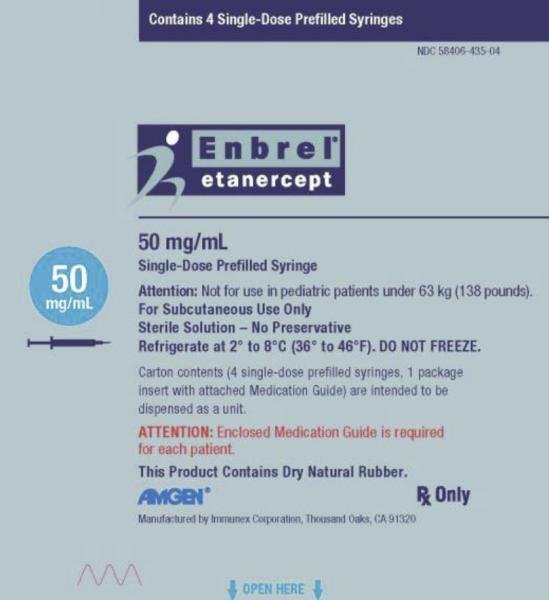