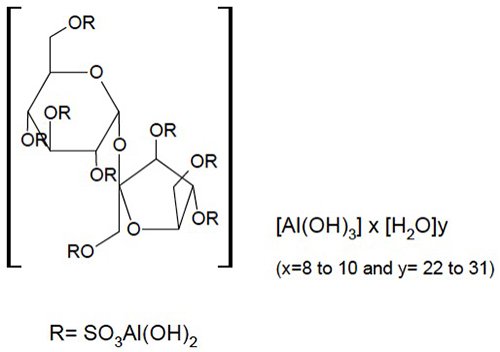 Although the mechanism of Sucralfate’s ability to accelerate healing of duodenal ulcers remains to be fully defined, it is known that it exerts its effect through a local, rather than systemic, action. The following observations also appear pertinent:

These observations suggest that Sucralfate’s antiulcer activity is the result of formation of an ulcer-adherent complex that covers the ulcer site and protects it against further attack by acid, pepsin, and bile salts. There are approximately 14 to 16 mEq of acid-neutralizing capacity per 1 g dose of Sucralfate.

Over 600 patients have participated in well-controlled clinical trials worldwide. Multicenter trials conducted in the United States, both of them placebo-controlled studies with endoscopic evaluation at 2 and 4 weeks, showed:

The Sucralfate-placebo differences were statistically significant in both studies at 4 weeks but not at 2 weeks. The poorer result in the first study may have occurred because Sucralfate was given 2 hours after meals and at bedtime rather than 1 hour before meals and at bedtime, the regimen used in international studies and in the second United States study. In addition, in the first study liquid antacid was utilized as needed, whereas in the second study antacid tablets were used.

Two double-blind randomized placebo-controlled U.S. multicenter trials have demonstrated that Sucralfate (1 g bid) is effective as maintenance therapy following healing of duodenal ulcers. In one study, endoscopies were performed monthly for 4 months. Of the 254 patients who enrolled, 239 were analyzed in the intention-to-treat life table analysis presented below.

In this study, prn antacids were not permitted.

In the other study, scheduled endoscopies were performed at 6 and 12 months, but for-cause endoscopies were permitted as symptoms dictated. Median symptom scores between the Sucralfate and placebo groups were not significantly different. A life table intention-to-treat analysis for the 94 patients enrolled in the trial had the following results:

In this study, prn antacids were permitted.

Data from placebo-controlled studies longer than 1 year are not available.

Indications and Usage for Sucralfate

Sucralfate tablets are indicated in:

Sucralfate tablets are contraindicated in patients with known hypersensitivity reactions to the active substance or to any of the excipients.

The physician should read the "PRECAUTIONS" section when considering the use of this drug in pregnant or pediatric patients, or patients of childbearing potential.

Isolated reports of Sucralfate tablet aspiration with accompanying respiratory complications have been received. Therefore, Sucralfate tablets should be used with caution by patients who have known conditions that may impair swallowing, such as recent or prolonged intubation, tracheostomy, prior history of aspiration, dysphagia, or any other conditions that may alter gag and cough reflexes, or diminish oropharyngeal coordination or motility.

When Sucralfate is administered orally, small amounts of aluminum are absorbed from the gastrointestinal tract. Concomitant use of Sucralfate with other products that contain aluminum, such as aluminum-containing antacids, may increase the total body burden of aluminum. Patients with normal renal function receiving the recommended doses of Sucralfate and aluminum-containing products adequately excrete aluminum in the urine. Patients with chronic renal failure or those receiving dialysis have impaired excretion of absorbed aluminum. In addition, aluminum does not cross dialysis membranes because it is bound to albumin and transferrin plasma proteins. Aluminum accumulation and toxicity (aluminum osteodystrophy, osteomalacia, encephalopathy) have been described in patients with renal impairment. Sucralfate should be used with caution in patients with chronic renal failure.

Some studies have shown that simultaneous Sucralfate administration in healthy volunteers reduced the extent of absorption (bioavailability) of single doses of the following: cimetidine, digoxin, fluoroquinolone antibiotics, ketoconazole, l-thyroxine, phenytoin, quinidine, ranitidine, tetracycline, and theophylline. Subtherapeutic prothrombin times with concomitant warfarin and Sucralfate therapy have been reported in spontaneous and published case reports. However, two clinical studies have demonstrated no change in either serum warfarin concentration or prothrombin time with the addition of Sucralfate to chronic warfarin therapy.

The mechanism of these interactions appears to be nonsystemic in nature, presumably resulting from Sucralfate binding to the concomitant agent in the gastrointestinal tract. In all case studies to date (cimetidine, ciprofloxacin, digoxin, norfloxacin, ofloxacin, and ranitidine), dosing the concomitant medication 2 hours before Sucralfate eliminated the interaction. Because of the potential of Sucralfate to alter the absorption of some drugs, Sucralfate should be administered separately from other drugs when alterations in bioavailability are felt to be critical. In these cases, patients should be monitored appropriately.

Teratogenicity studies have been performed in mice, rats, and rabbits at doses up to 50 times the human dose and have revealed no evidence of harm to the fetus due to Sucralfate. There are, however, no adequate and well-controlled studies in pregnant women. Because animal reproduction studies are not always predictive of human response, this drug should be used during pregnancy only if clearly needed.

Clinical studies of Sucralfate tablets did not include sufficient numbers of subjects aged 65 and over to determine whether they respond differently from younger subjects. Other reported clinical experience has not identified differences in responses between the elderly and younger patients. In general, dose selection for an elderly patient should be cautious, usually starting at the low end of the dosing range, reflecting the greater frequency of decreased hepatic, renal, or cardiac function, and of concomitant disease or other drug therapy (See DOSAGE AND ADMINISTRATION).

This drug is known to be substantially excreted by the kidney, and the risk of toxic reactions to this drug may be greater in patients with impaired renal function (See PRECAUTIONS Special Populations: Chronic Renal Failure and Dialysis Patients). Because elderly patients are more likely to have decreased renal function, care should be taken in dose selection, and it may be useful to monitor renal function.

Adverse reactions to Sucralfate in clinical trials were minor and only rarely led to discontinuation of the drug. In studies involving over 2,700 patients treated with Sucralfate tablets, adverse effects were reported in 129 (4.7%).

Post-marketing cases of hypersensitivity have been reported with the use of Sucralfate tablets, including dyspnea, lip swelling, pruritus, rash, and urticaria.

Cases of anaphylactic reactions, bronchospasm, laryngeal edema, edema of the mouth, pharyngeal edema, respiratory tract edema and swelling of the face have been reported with an unknown oral formulation of Sucralfate.

Bezoars have been reported in patients treated with Sucralfate. The majority of patients had underlying medical conditions that may predispose to bezoar formation (such as delayed gastric emptying) or were receiving concomitant enteral tube feedings.

Inadvertent injection of insoluble Sucralfate and its insoluble excipients has led to fatal complications, including pulmonary and cerebral emboli. Sucralfate is not intended for intravenous administration.

Due to limited experience in humans with overdosage of Sucralfate, no specific treatment recommendations can be given. Acute oral toxicity studies in animals, however, using doses up to 12 g/kg body weight, could not find a lethal dose. Sucralfate is only minimally absorbed from the gastrointestinal tract. Risks associated with acute overdosage should, therefore, be minimal. In rare reports describing Sucralfate overdose, most patients remained asymptomatic. Those few reports where adverse events were described included symptoms of dyspepsia, abdominal pain, nausea, and vomiting.

Antacids may be prescribed as needed for relief of pain but should not be taken within one-half hour before or after Sucralfate.

While healing with Sucralfate may occur during the first week or two, treatment should be continued for 4 to 8 weeks unless healing has been demonstrated by x-ray or endoscopic examination.

Elderly: In general, dose selection for an elderly patient should be cautious, usually starting at the low end of the dosing range, reflecting the greater frequency of decreased hepatic, renal, or cardiac function, and of concomitant disease or other drug therapy (See PRECAUTIONS Geriatric Use).

How is Sucralfate Supplied

Sucralfate tablets, USP 1 g are available as light pink, oblong tablets debossed with “A56” on one side and plain on the other side with a score line. They are supplied as follows: 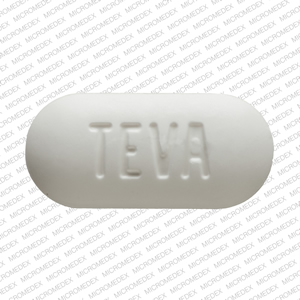