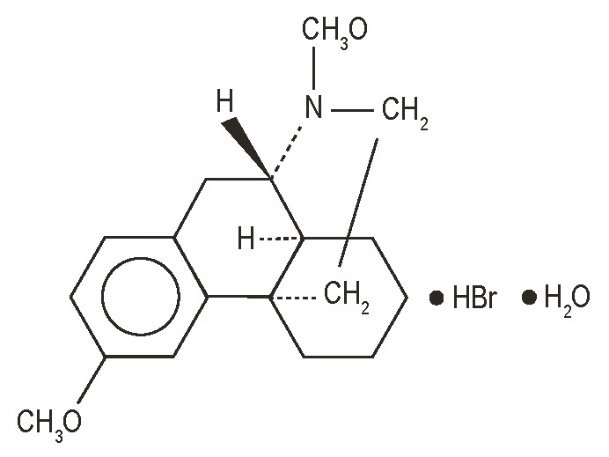 Promethazine hydrochloride occurs as a white to faint yellow, practically odorless, crystalline powder which slowly oxidizes and turns blue on prolonged exposure to air. It is soluble in water and freely soluble in alcohol. It has a molecular weight of 320.88, a molecular formula of C17H20N2S•HCI, and the following structural formula: 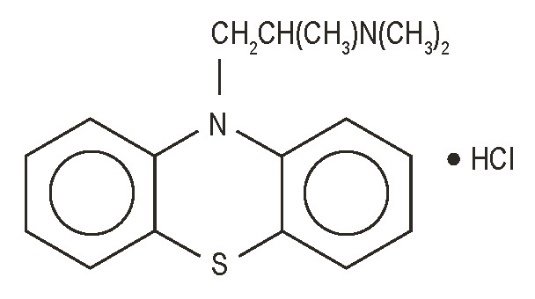 Dextromethorphan is an antitussive agent and, unlike the isomeric levorphanol, it has no analgesic or addictive properties.

The drug acts centrally and elevates the threshold for coughing. It is about equal to codeine in depressing the cough reflex. In therapeutic dosage dextromethorphan does not inhibit ciliary activity.

Dextromethorphan is rapidly absorbed from the gastrointestinal tract and exerts its effect in 15 to 30 minutes. The duration of action after oral administration is approximately three to six hours. Dextromethorphan is metabolized primarily by liver enzymes undergoing O-demethylation, N-demethylation, and partial conjugation with glucuronic acid and sulfate. In humans, (+)-3-hydroxy-N-methyl-morphinan, (+)-3-hydroxymorphinan, and traces of unmetabolized drug were found in urine after oral administration.

Promethazine is a phenothiazine derivative which differs structurally from the antipsychotic phenothiazines by the presence of a branched side chain and no ring substitution. It is thought that this configuration is responsible for its relative lack (1/10 that of chlorpromazine) of dopamine antagonist properties.

Promethazine is an H1 receptor blocking agent. In addition to its antihistaminic action, it provides clinically useful sedative and antiemetic effects.

Promethazine is well absorbed from the gastrointestinal tract. Clinical effects are apparent within 20 minutes after oral administration and generally last four to six hours, although they may persist as long as 12 hours. Promethazine is metabolized by the liver to a variety of compounds; the sulfoxides of promethazine and N-demethylpromethazine are the predominant metabolites appearing in the urine.

Promethazine hydrochloride and dextromethorphan hydrobromide oral solution is indicated for the temporary relief of coughs and upper respiratory symptoms associated with allergy or the common cold.

Promethazine is contraindicated in comatose states, and in individuals known to be hypersensitive or to have had an idiosyncratic reaction to promethazine or to other phenothiazines.

Antihistamines are contraindicated for use in the treatment of lower respiratory tract symptoms, including asthma.

PROMETHAZINE HYDROCHLORIDE SHOULD NOT BE USED IN PEDIATRIC PATIENTS LESS THAN 2 YEARS OF AGE BECAUSE OF THE POTENTIAL FOR FATAL RESPIRATORY DEPRESSION.

Administration of dextromethorphan may be accompanied by histamine release and should be used with caution in atopic children.

CNS Depression: Promethazine may impair the mental and/or physical abilities required for the performance of potentially hazardous tasks, such as driving a vehicle or operating machinery. The impairment may be amplified by concomitant use of other central nervous system depressants such as alcohol, sedatives/hypnotics (including barbiturates), narcotics, narcotic analgesics, general anesthetics, tricyclic antidepressants, and tranquilizers; therefore, such agents should either be eliminated or given in reduced dosage in the presence of promethazine HCl (see PRECAUTIONS - Information For Patients and Drug Interactions).

Use of promethazine in patients with compromised respiratory function (e.g., COPD, sleep apnea) should be avoided.

Bone Marrow Depression: Promethazine should be used with caution in patients with bone marrow depression. Leukopenia and agranulocytosis have been reported, usually when promethazine HCl has been used in association with other known marrow toxic agents.

The diagnostic evaluation of patients with this syndrome is complicated. In arriving at a diagnosis, it is important to identify cases where the clinical presentation includes both serious medical illness (e.g., pneumonia, systemic infection, etc.) and untreated or inadequately treated extrapyramidal signs and symptoms (EPS). Other important considerations in the differential diagnosis include central anticholinergic toxicity, heat stroke, drug fever and primary central nervous system (CNS) pathology.

The management of NMS should include 1) immediate discontinuation of promethazine HCl, antipsychotic drugs, if any, and other drugs not essential to concurrent therapy, 2) intensive symptomatic treatment and medical monitoring, and 3) treatment of any concomitant serious medical problems for which specific treatments are available. There is no general agreement about specific pharmacological treatment regimens for uncomplicated NMS.

Since recurrences of NMS have been reported with phenothiazines, the reintroduction of promethazine HCl should be carefully considered.

Use in Pediatric Patients

PROMETHAZINE PRODUCTS ARE CONTRAINDICATED FOR USE IN PEDIATRIC PATIENTS LESS THAN TWO YEARS OF AGE.

Administration of promethazine has been associated with reported cholestatic jaundice.

Dextromethorphan should be used with caution in sedated patients, in the debilitated, and in patients confined to the supine position.

Promethazine should be used cautiously in persons with cardiovascular disease or with impairment of liver function.

Promethazine and Dextromethorphan may cause marked drowsiness or impair the mental and/or physical abilities required for the performance of potentially hazardous tasks, such as driving a vehicle or operating machinery. Ambulatory patients should be told to avoid engaging in such activities until it is known that they do not become drowsy or dizzy from Promethazine and Dextromethorphan therapy. Children should be supervised to avoid potential harm in bike riding or in other hazardous activities.

The concomitant use of alcohol or other central nervous system depressants, including narcotic analgesics, sedatives, hypnotics, and tranquilizers, may have an additive effect and should be avoided or their dosage reduced.

Patients should be advised to report any involuntary muscle movements.

Avoid prolonged exposure to the sun.

Promethazine: CNS Depressants – Promethazine may increase, prolong, or intensify the sedative action of other central nervous system depressants, such as alcohol, sedatives/hypnotics (including barbiturates), narcotics, narcotic analgesics, general anesthetics, tricyclic antidepressants, and tranquilizers; therefore, such agents should be avoided or administered in reduced dosage to patients receiving promethazine HCl. When given concomitantly with promethazine, the dose of barbiturates should be reduced by at least one-half, and the dose of narcotics should be reduced by one-quarter to one-half. Dosage must be individualized. Excessive amounts of promethazine HCl relative to a narcotic may lead to restlessness and motor hyperactivity in the patient with pain; these symptoms usually disappear with adequate control of the pain.

Anticholinergics – Concomitant use of other agents with anticholinergic properties should be undertaken with caution.

Monoamine Oxidase Inhibitors (MAOI) – Drug interactions, including an increased incidence of extrapyramidal effects, have been reported when some MAOI and phenothiazines are used concomitantly.

The following laboratory tests may be affected in patients who are receiving therapy with promethazine hydrochloride.

Pregnancy Tests: Diagnostic pregnancy tests based on immunological reactions between HCG and anti-HCG may result in false-negative or false-positive interpretations.

Glucose Tolerance Test: An increase in blood glucose has been reported in patients receiving promethazine.

Long-term animal studies have not been performed to assess the carcinogenic potential of promethazine or of dextromethorphan. There are no animal or human data concerning the carcinogenicity, mutagenicity, or impairment of fertility with these drugs. Promethazine was nonmutagenic in the Salmonella test system of Ames.

Teratogenic Effects – Pregnancy Category C: Teratogenic effects have not been demonstrated in rat-feeding studies at doses of 6.25 and 12.5 mg/kg of promethazine HCl. These doses are from approximately 2.1 to 4.2 times the maximum recommended total daily dose of promethazine for a 50-kg subject, depending upon the indication for which the drug is prescribed. Daily doses of 25 mg/kg intraperitoneally have been found to produce fetal mortality in rats.

Specific studies to test the action of the drug on parturition, lactation, and development of the animal neonate were not done, but a general preliminary study in rats indicated no effect on these parameters. Although antihistamines have been found to produce fetal mortality in rodents, the pharmacological effects of histamine in the rodent do not parallel those in man. There are no adequate and well-controlled studies of promethazine in pregnant women.

Promethazine and Dextromethorphan should be used during pregnancy only if the potential benefit justifies the risk to the fetus.

Nonteratogenic Effects: Promethazine administered to a pregnant woman within two weeks of delivery may inhibit platelet aggregation in the newborn.

Limited data suggest that use of promethazine HCl during labor and delivery does not have an appreciable effect on the duration of labor or delivery and does not increase the risk of need for intervention in the newborn. The effect on later growth and development of the newborn is unknown. See also "Nonteratogenic Effects".

It is not known whether promethazine or dextromethorphan is excreted in human milk.

Caution should be exercised when Promethazine and Dextromethorphan is administered to a nursing woman.

Promethazine hydrochloride and dextromethorphan hydrobromide oral solution should be used with caution in pediatric patients 2 years of age and older (see WARNINGS – Use In Pediatric Patients).

Clinical studies of promethazine hydrochloride and dextromethorphan hydrobromide oral solution did not include sufficient numbers of subjects aged 65 and over to determine whether they respond differently from younger subjects. Other reported clinical experience has not identified differences in responses between the elderly and younger patients. In general, dose selection for an elderly patient should be cautious, usually starting at the low end of the dosing range, reflecting the greater frequency of decreased hepatic, renal or cardiac function, and of concomitant disease or other drug therapy.

Sedating drugs may cause confusion and over-sedation in the elderly; elderly patients generally should be started on low doses of promethazine hydrochloride and dextromethorphan hydrobromide oral solution and observed closely.

Paradoxical Reactions – Hyperexcitability and abnormal movements have been reported in patients following a single administration of promethazine HCl. Consideration should be given to the discontinuation of promethazine HCl and to the use of other drugs if these reactions occur. Respiratory depression, nightmares, delirium, and agitated behavior have also been reported in some of these patients.

According to the WHO Expert Committee on Drug Dependence, dextromethorphan could produce very slight psychic dependence but no physical dependence.

Dextromethorphan may produce central excitement and mental confusion. Very high doses may produce respiratory depression. One case of toxic psychosis (hyperactivity, marked visual and auditory hallucinations) after ingestion of a single dose of 20 tablets (300 mg) of dextromethorphan has been reported.

Stimulation may be evident, especially in children and geriatric patients. Convulsions may rarely occur. A paradoxical reaction has been reported in children receiving single doses of 75 mg to 125 mg orally, characterized by hyperexcitability and nightmares. Atropine-like signs and symptoms – dry mouth, fixed dilated pupils, flushing, as well as gastrointestinal symptoms, may occur.

The treatment of overdosage with Promethazine and Dextromethorphan is essentially symptomatic and supportive. Only in cases of extreme overdosage or individual sensitivity do vital signs including respiration, pulse, blood pressure, temperature, and EKG need to be monitored. Activated charcoal orally or by lavage may be given, or sodium or magnesium sulfate orally as a cathartic. Attention should be given to the re-establishment of adequate respiratory exchange through provision of a patent airway and institution of assisted or controlled ventilation. Diazepam may be used to control convulsions. Acidosis and electrolyte losses should be corrected. The antidotal efficacy of narcotic antagonists to dextromethorphan has not been established; note that any of the depressant effects of promethazine are not reversed by naloxone. Avoid analeptics, which may cause convulsions.

Severe hypotension usually responds to the administration of norepinephrine or phenylephrine. EPINEPHRINE SHOULD NOT BE USED, since its use in a patient with partial adrenergic blockage may further lower the blood pressure.

Limited experience with dialysis indicates that it is not helpful.

Promethazine hydrochloride and dextromethorphan hydrobromide oral solution is contraindicated for children under 2 years of age (see WARNINGS – Black Box Warning and Use In Pediatric Patients).

The average effective dose is given in the following table:

Dispense in a tight, light-resistant container with a child-resistant closure as defined in the USP. 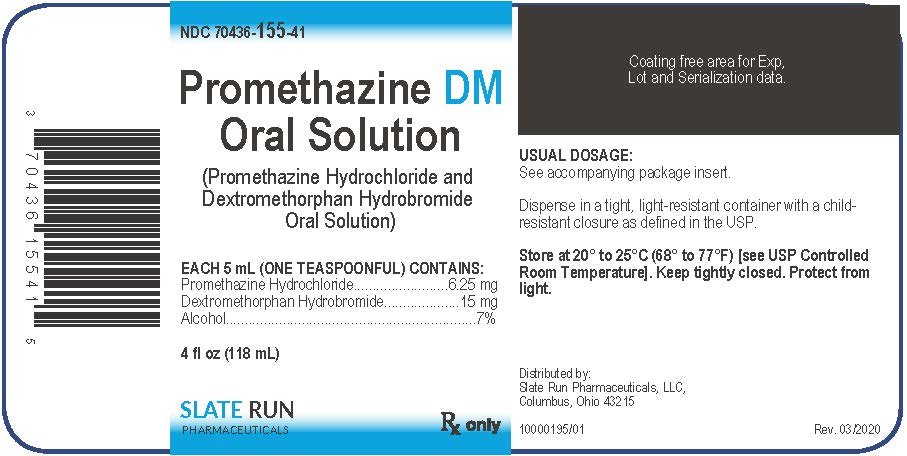 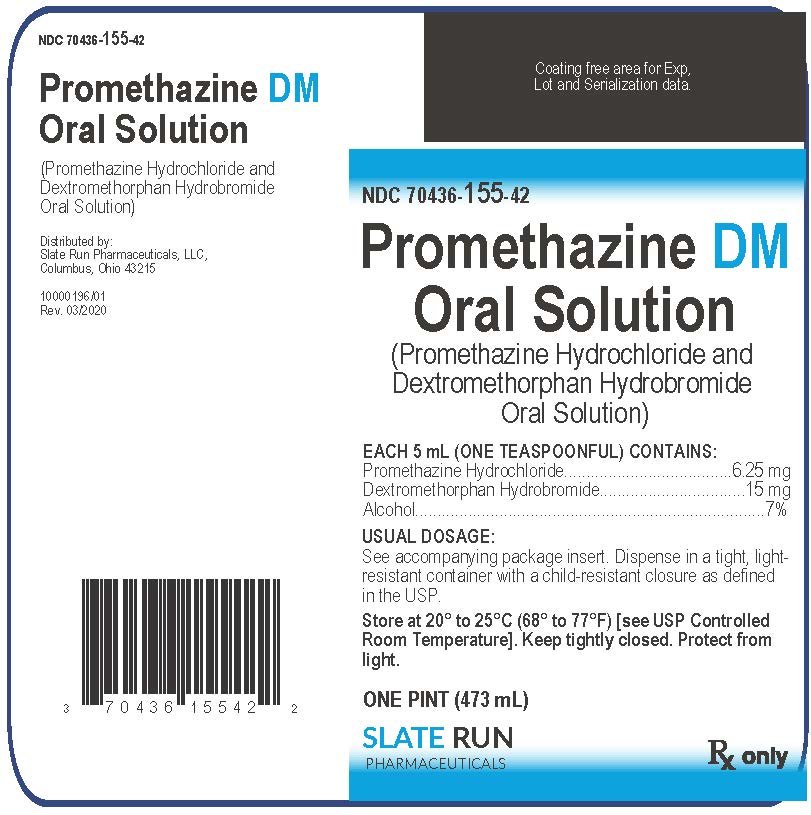