Myambutol ethambutol hydrochloride is an oral chemotherapeutic agent which is specifically effective against actively growing microorganisms of the genus Mycobacterium, including M. tuberculosis. The structural formula is:

Myambutol, following a single oral dose of 25 mg/kg of body weight, attains a peak of 2 to 5 mg/mL in serum 2 to 4 hours after administration. When the drug is administered daily for longer periods of time at this dose, serum levels are similar. The serum level of Myambutol falls to undetectable levels by 24 hours after the last dose except in some patients with abnormal renal function. The intracellular concentrations of erythrocytes reach peak values approximately twice those of plasma and maintain this ratio throughout the 24 hours.

During the 24-hour period following oral administration of Myambutol approximately 50 percent of the initial dose is excreted unchanged in the urine, while an additional 8 to 15 percent appears in the form of metabolites. The main path of metabolism appears to be an initial oxidation of the alcohol to an aldehydic intermediate, followed by conversion to a dicarboxylic acid. From 20 to 22 percent of the initial dose is excreted in the feces as unchanged drug. No drug accumulation has been observed with consecutive single daily doses of 25 mg/kg in patients with normal kidney function, although marked accumulation has been demonstrated in patients with renal insufficiency.

Myambutol diffuses into actively growing mycobacterium cells such as tubercle bacilli. Myambutol appears to inhibit the synthesis of one or more metabolites, thus causing impairment of cell metabolism, arrest of multiplication, and cell death. No cross resistance with other available antimycobacterial agents has been demonstrated.

Myambutol has been shown to be effective against strains of Mycobacterium tuberculosis but does not seem to be active against fungi, viruses, or other bacteria. Mycobacterium tuberculosis strains previously unexposed to Myambutol have been uniformly sensitive to concentrations of 8 or less mcg/mL, depending on the nature of the culture media. When Myambutol has been used alone for treatment of tuberculosis, tubercle bacilli from these patients have developed resistance to Myambutol (ethambutol hydrochloride) by in-vitro susceptibility tests; the development of resistance has been unpredictable and appears to occur in a step-like manner. No cross resistance between Myambutol and other antituberculous drugs has been reported. Myambutol has reduced the incidence of the emergence of mycobacterial resistance to isoniazid when both drugs have been used concurrently.

An agar diffusion microbiologic assay, based upon inhibition of Mycobacterium smegmatis (ATCC 607) may be used to determine concentrations of Myambutol in serum and urine.

Toxicological studies in dogs on high prolonged doses produced evidence of myocardial damage and failure, and depigmentation of the tapetum lucidum of the eyes, the significance of which is not known. Degenerative changes in the central nervous system, apparently not dose-related, have also been noted in dogs receiving ethambutol hydrochloride over a prolonged period.

In the rhesus monkey, neurological signs appeared after treatment with high doses given daily over a period of several months. These were correlated with specific serum levels of ethambutol and with definite neuroanatomical changes in the central nervous system. Focal interstitial carditis was also noted in monkeys which received ethambutol hydrochloride in high doses for a prolonged period.

Indications and Usage for Myambutol

Myambutol is indicated for the treatment of pulmonary tuberculosis. It should not be used as the sole antituberculous drug, but should be used in conjunction with at least one other antituberculous drug. Selection of the companion drug should be based on clinical experience, considerations of comparative safety, and appropriate in-vitro susceptibility studies. In patients who have not received previous antituberculous therapy, ie, initial treatment, the most frequently used regimens have been the following:

Myambutol plus isoniazid plus streptomycin.

In patients who have received previous antituberculous therapy, mycobacterial resistance to other drugs used in initial therapy is frequent. Consequently, in such retreatment patients, Myambutol should be combined with at least one of the second line drugs not previously administered to the patient and to which bacterial susceptibility has been indicated by appropriate in-vitro studies. Antituberculous drugs used with Myambutol have included cycloserine, ethionamide, pyrazinamide, viomycin and other drugs. Isoniazid, aminosalicylic acid, and streptomycin have also been used in multiple drug regimens. Alternating drug regimens have also been utilized.

Myambutol may produce decreases in visual acuity which appear to be due to optic neuritis. This effect may be related to dose and duration of treatment. This effect is generally reversible when administration of the drug is discontinued promptly. However, irreversible blindness has been reported. (See PRECAUTIONS and ADVERSE REACTIONS).

Liver toxicities including fatalities have been reported (See ADVERSE REACTIONS). Baseline and periodic assessment of hepatic function should be performed.

Myambutol ethambutol hydrochloride is not recommended for use in pediatric patients under thirteen years of age since safe conditions for use have not been established.

Patients with decreased renal function need the dosage reduced as determined by serum levels of Myambutol, since the main path of excretion of this drug is by the kidneys.

Because this drug may have adverse effects on vision, physical examination should include ophthalmoscopy, finger perimetry and testing of color discrimination. In patients with visual defects such as cataracts, recurrent inflammatory conditions of the eye, optic neuritis, and diabetic retinopathy, the evaluation of changes in visual acuity is more difficult, and care should be taken to be sure the variations in vision are not due to the underlying disease conditions. In such patients, consideration should be given to relationship between benefits expected and possible visual deterioration since evaluation of visual changes is difficult. (For recommended procedures, see next paragraphs under ADVERSE REACTIONS).

As with any potent drug, baseline and periodic assessment of organ system functions, including renal, hepatic, and hematopoietic, should be performed.

There are no adequate and well-controlled studies in pregnant women. There are reports of ophthalmic abnormalities occurring in
infants born to women on antituberculous therapy that included Myambutol. Myambutol should be used during pregnancy
only if the benefit justifies the potential risk to the fetus.

Myambutol has been shown to be teratogenic in pregnant mice and rabbits when given in high doses. When pregnant mice or
rabbits were treated with high doses of ethambutol hydrochloride, fetal mortality was slightly but not significantly (P>0.05) increased.
Female rats treated with ethambutol hydrochloride displayed slight but insignificant (P>0.05) decreases in fertility and litter size.

In fetuses born of mice treated with high doses of Myambutol during pregnancy, a low incidence of cleft palate, exencephaly
and abnormality of the vertebral column were observed. Minor abnormalities of the cervical vertebra were seen in the newborn of
rats treated with high doses of ethambutol hydrochloride during pregnancy. Rabbits receiving high doses of Myambutol during
pregnancy gave birth to two fetuses with monophthalmia, one with a shortened right forearm accompanied by bilateral wrist-joint
contracture and one with hare lip and cleft palate.

Myambutol is excreted into breast milk. The use of Myambutol should be considered only if the expected benefit to the mother outweighs the potential risk to the infant.

Myambutol (ethambutol hydrochloride) is not recommended for use in pediatric patients under thirteen years of age since safe conditions for use have not been established.

There are limited data on the use of ethambutol in the elderly. One study of 101 patients, 65 years and older, on multiple drug antituberculosis regimens included 94 patients on ethambutol. No differences in safety or tolerability were observed in these patients compared with that reported in adults in general. Other reported clinical experience has not identified differences in responses between the elderly and younger patients, but greater sensitivity of some older individuals cannot be ruled out.

Myambutol may produce decreases in visual acuity, including irreversible blindness, which appear to be due to optic neuritis. Optic neuropathy including optic neuritis or retrobulbar neuritis occurring in association with ethambutol therapy may be characterized by one or more of the following events: decreased visual acuity, scotoma, color blindness, and/or visual defect. These events have also been reported in the absence of a diagnosis of optic or retrobulbar neuritis.

Patients should be advised to report promptly to their physician any change of visual acuity.

The change in visual acuity may be unilateral or bilateral and hence each eye must be tested separately and both eyes tested together. Testing of visual acuity should be performed before beginning Myambutol therapy and periodically during drug administration, except that it should be done monthly when a patient is on a dosage of more than 15 mg per kilogram per day. Snellen eye charts are recommended for testing of visual acuity. Studies have shown that there are definite fluctuations of one or two lines of the Snellen chart in the visual acuity of many tuberculous patients not receiving Myambutol.

The following table may be useful in interpreting possible changes in visual acuity attributable to Myambutol.

If corrective glasses are used prior to treatment, these must be worn during visual acuity testing. During 1 to 2 years of therapy, a refractive error may develop which must be corrected in order to obtain accurate test results. Testing the visual acuity through a pinhole eliminates refractive error. Patients developing visual abnormality during Myambutol treatment may show subjective visual symptoms before, or simultaneously with, the demonstration of decreases in visual acuity, and all patients receiving Myambutol should be questioned periodically about blurred vision and other subjective eye symptoms.

Recovery of visual acuity generally occurs over a period of weeks to months after the drug has been discontinued. Some patients have received Myambutol (ethambutol hydrochloride) again after such recovery without recurrence of loss of visual acuity.

Elevated serum uric acid levels occur and precipitation of acute gout has been reported. Pulmonary infiltrates, with or without eosinophilia, also have been reported during Myambutol therapy. Liver toxicities, including fatalities, have been reported (SeeWARNINGS.) Since Myambutol is recommended for therapy in conjunction with one or more other antituberculous drugs, these changes may be related to the concurrent therapy. Hypersensitivity syndrome consisting ot cutaneous reaction (such as rash or exfoliative dermatitis), eosinophilia, and one or more of the following: hepatitis, pneumonitis, nephritis, myocarditis, pericarditis. Fever and lymphadenopathy may be present.

Myambutol should not be used alone, in initial treatment or in retreatment. Myambutol should be administered on a once every 24-hour basis only. Absorption is not significantly altered by administration with food. Therapy, in general, should be continued until bacteriological conversion has become permanent and maximal clinical improvement has occurred.

Myambutol is not recommended for use in pediatric patients under thirteen years of age since safe conditions for use have not been established.

In patients who have not received previous antituberculous therapy, administer Myambutol 15 mg/kg (7 mg/ lb) of body weight, as a single oral dose once every 24 hours. In the more recent studies, isoniazid has been administered concurrently in a single, daily, oral dose.

In patients who have received previous antituberculous therapy, administer Myambutol 25 mg/kg (11 mg/lb) of body weight, as a single oral dose once every 24 hours. Concurrently administer at least one other antituberculous drug to which the organisms have been demonstrated to be susceptible by appropriate in-vitro tests. Suitable drugs usually consist of those not previously used in the treatment of the patient. After 60 days of Myambutol administration, decrease the dose to 15 mg/kg (7mg/ lb) of body weight, and administer as a single oral dose once every 24 hours.

During the period when a patient is on a daily dose of 25 mg/kg, monthly eye examinations are advised.

How is Myambutol Supplied

100 mg - round, convex, white, film coated tablets engraved with M6 on one side are supplied as follows:

400 mg – round, convex, white, scored, film coated tablets engraved with M to the left and 7 to the right of the score on one side are
supplied as follows: 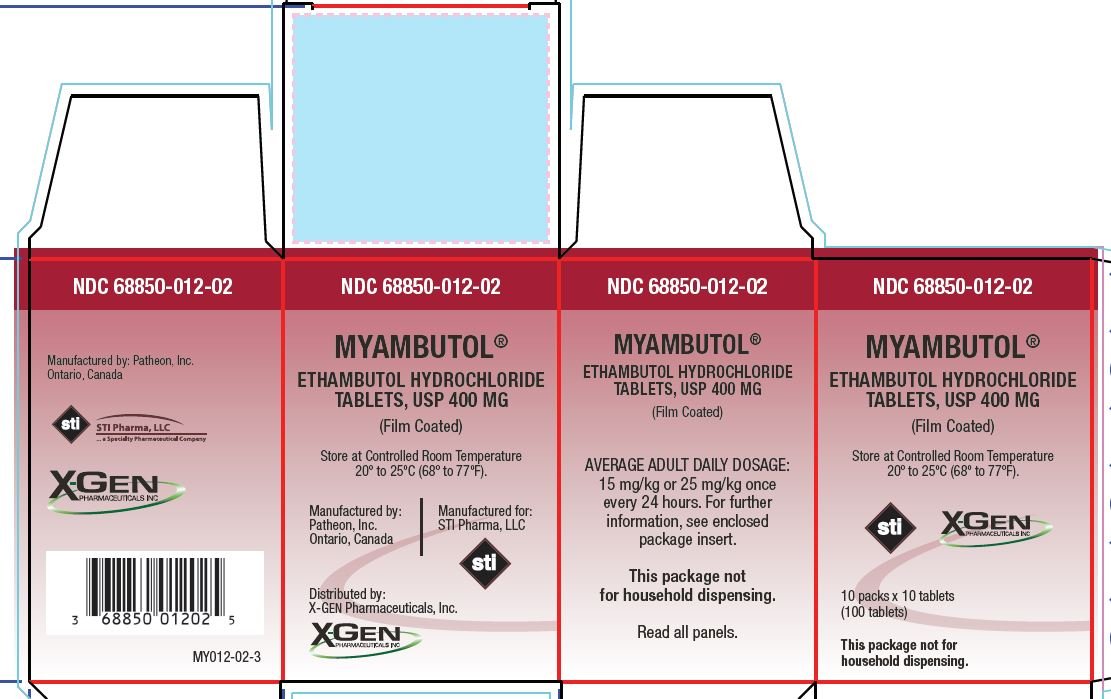 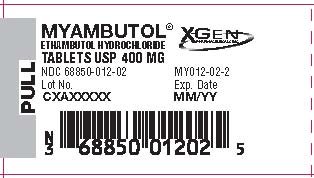 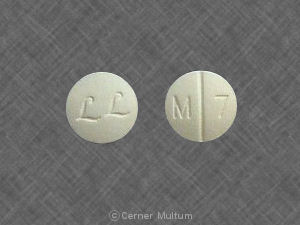