Expand
WARNING: NOT FOR TREATMENT OF OBESITY OR FOR WEIGHT LOSS

Thyroid hormones, including Levothyroxine Sodium Injection, should not be used for the treatment of obesity or for weight loss. (5.3)

Larger doses may produce serious or even life-threatening manifestations of toxicity. (6)

Indications and Usage for Levothyroxine Injection

Levothyroxine Sodium Injection is indicated for the treatment of myxedema coma.

An initial intravenous loading dose of Levothyroxine Sodium Injection between 300 to 500 mcg, followed by once daily intravenous maintenance doses between 50 and 100 mcg, should be administered, as clinically indicated, until the patient can tolerate oral therapy.

The age, general physical condition, and cardiac risk factors of the patient, as well as the clinical severity of myxedema and duration of myxedema symptoms should be considered when determining the starting and maintenance dosages of Levothyroxine Sodium Injection.

Dosing in the Elderly and in Patients with Cardiovascular Disease

Intravenous levothyroxine may be associated with cardiac toxicity – including arrhythmias, tachycardia, myocardial ischemia and infarction, or worsening of congestive heart failure and death – in the elderly and in those with underlying cardiovascular disease. Therefore, cautious use, including doses in the lower end of the recommended range, may be warranted in these populations.

Intravenous levothyroxine may be associated with cardiac toxicity-including arrhythmias, tachycardia, myocardial ischemia and infarction, or worsening of congestive heart failure and death—in the elderly and in those with underlying cardiovascular disease. Therefore, cautious use, including doses in the lower end of the recommended range, may be warranted in these populations.

Discard any unused portion. DO NOT ADD LEVOTHYROXINE SODIUM INJECTION TO OTHER INTRAVENOUS FLUIDS. Parenteral drug products should be inspected visually for particulate matter and discoloration prior to administration, whenever solution and container permit.

Chronic autoimmune thyroiditis, which can lead to myxedema coma, may occur in association with other autoimmune disorders such as adrenal insufficiency, pernicious anemia, and insulin‑dependent diabetes mellitus. Patients should be treated with replacement glucocorticoids prior to initiation of treatment with Levothyroxine Sodium Injection, until adrenal function has been adequately assessed. Failure to do so may precipitate an acute adrenal crisis when thyroid hormone therapy is initiated, due to increased metabolic clearance of glucocorticoids by thyroid hormone. With initiation of Levothyroxine Sodium Injection, patients with myxedema coma should also be monitored for previously undiagnosed diabetes insipidus.

Adverse reactions associated with levothyroxine are primarily those of hyperthyroidism due to therapeutic overdosage [see Warnings and Precautions (5), Overdosage (10)]. They include the following:

Seizures have been reported rarely with the institution of levothyroxine therapy.

Addition of levothyroxine to antidiabetic or insulin therapy may result in increased antidiabetic agent or insulin requirements. Careful monitoring of diabetic control is recommended.

Levothyroxine increases the response to oral anticoagulant therapy. Therefore, a decrease in the dose of anticoagulant may be warranted with correction of the hypothyroid. Closely monitor coagulation tests to permit appropriate and timely dosage adjustments.

Concurrent use of ketamine and levothyroxine may produce marked hypertension and tachycardia. Closely monitor blood pressure and heart rate in these patients.

The clinical data in pregnant women treated with oral levothyroxine to treat hypothyroidism do not indicate a drug-associated risk of major birth defects, miscarriage, or adverse maternal or fetal outcomes. There are no data available on the use of Levothyroxine Sodium Injection in pregnant women. There are risks to the mother and fetus associated with myxedema coma in pregnancy (see Clinical Considerations).

No developmental or reproductive toxicity studies in animals have been conducted with Levothyroxine Sodium Injection.

The safety and effectiveness of Levothyroxine Sodium Injection have not been established in pediatric patients.

Geriatric Use and Patients with Underlying Cardiovascular Disease

See Section 2, Dosage and Administration, for full prescribing information in the geriatric patient population. Because of the increased prevalence of cardiovascular disease in the elderly, cautious use of Levothyroxine Sodium Injection in the elderly and in patients with known cardiac risk factors is advised. Atrial fibrillation is a common side effect associated with levothyroxine treatment in the elderly [see Dosage and Administration (2) and Warnings and Precautions (5)].

In general, the signs and symptoms of overdosage with levothyroxine are those of hyperthyroidism [see Warnings and Precautions (5) and Adverse Reactions (6)]. In addition, confusion and disorientation may occur. Cerebral embolism, shock, coma, and death have been reported. Excessive doses of Levothyroxine Sodium Injection (greater than 500 mcg) are associated with cardiac complications in patients with underlying cardiac disease.

Levothyroxine Sodium Injection should be reduced in dose or temporarily discontinued if signs or symptoms of overdosage occur. To obtain up-to-date information about the treatment of overdose, a good resource is the certified Regional Poison Control Center. In managing overdosage, consider the possibility of multiple drug overdoses, interaction among drugs, and unusual drug kinetics in the patient.

In the event of an overdose, appropriate supportive treatment should be initiated as dictated by the patient’s medical status.

The physiological actions of thyroid hormones are produced predominantly by T3, the majority of which (approximately 80%) is derived from T4 by deiodination in peripheral tissues.

Thyroid hormone synthesis and secretion is regulated by the hypothalamic pituitary-thyroid axis. Thyrotropin releasing hormone (TRH) released from the hypothalamus stimulates secretion of thyrotropin stimulating hormone (TSH) from the anterior pituitary. TSH, in turn, is the physiologic stimulus for the synthesis and secretion of thyroid hormones, T4 and T3, by the thyroid gland. Circulating serum T3 and T4 levels exert a feedback effect on both TRH and TSH secretion. When serum T3 and T4 levels increase, TRH and TSH secretion decrease. When thyroid hormone levels decrease, TRH and TSH secretion increases. TSH is used for the diagnosis of hypothyroidism and evaluation of levothyroxine therapy adequacy with other laboratory and clinical data [see Dosage (2.1)]. There are drugs known to affect thyroid hormones and TSH by various mechanisms and those examples are diazepam, ethioamide, lovastatin, metoclopramide, 6-mercaptopurine, nitroprusside, perphenazine, and thiazide diuretics. Some drugs may cause a transient decrease in TSH secretion without hypothyroidism and those drugs (dose) are dopamine (greater than 1 mcg per kg per min), glucocorticoids (hydrocortisone greater than 100 mg per day or equivalent) and octreotide (greater than 100 mcg per day).

Absorption – Levothyroxine Sodium Injection is administered via the intravenous route. Following administration, the synthetic levothyroxine cannot be distinguished from the natural hormone that is secreted endogenously.

Distribution – Circulating thyroid hormones are greater than 99% bound to plasma proteins, including thyroxine binding globulin (TBG), thyroxine binding prealbumin (TBPA), and albumin (TBA), whose capacities and affinities vary for each hormone. The higher affinity of both TBG and TBPA for T4 partially explains the higher serum levels, slower metabolic clearance, and longer half-life of T4 compared to T3. Protein bound thyroid hormones exist in reverse equilibrium with small amounts of free hormone. Only unbound hormone is metabolically active. Many drugs and physiologic conditions affect the binding of thyroid hormones to serum proteins [see Warnings and Precautions (5) and Drug Interactions (7)]. Thyroid hormones do not readily cross the placental barrier [see Warnings and Precautions (5) and Use in Specific Populations (8)]. Betadex sulfobutyl ether (SBECD) does not affect levothyroxine binding to plasma proteins.

Metabolism – T4 is slowly eliminated. The major pathway of thyroid hormone metabolism is through sequential deiodination. Approximately eighty percent of circulating T3 is derived from peripheral T4 by mono-deiodination. The liver is the major site of degradation for both T4 and T3, with T4 deiodination also occurring at a number of additional sites, including the kidney and other tissues. Approximately 80% of the daily dose of T4 is deiodinated to yield equal amounts of T3 and reverse T3 (rT3). T3 and rT3 are further deiodinated to diiodothyronine. Thyroid hormones are also metabolized via conjugation with glucuronides and sulfates and excreted directly into the bile and gut where they undergo enterohepatic recirculation.

Elimination – Thyroid hormones are primarily eliminated by the kidneys. A portion of the conjugated hormone reaches the colon unchanged, where it is hydrolyzed and eliminated in feces as the free hormones. Urinary excretion of T4 decreases with age.

T3: Liothyronine
13 to 4 days in hyperthyroidism, 9 to 10 days in hypothyroidism.
2Includes TBG, TBPA, and TBA.

Animal studies have not been performed to evaluate the carcinogenic potential, mutagenic potential or effects on fertility of Levothyroxine Sodium Injection.

No animal toxicology studies have been conducted with Levothyroxine Sodium Injection.

No clinical studies have been conducted with Levothyroxine Sodium Injection in patients with myxedema coma. However, data from published literature support the intravenous use of levothyroxine sodium for the treatment of myxedema coma.

Discard any unused portion.
Rx only 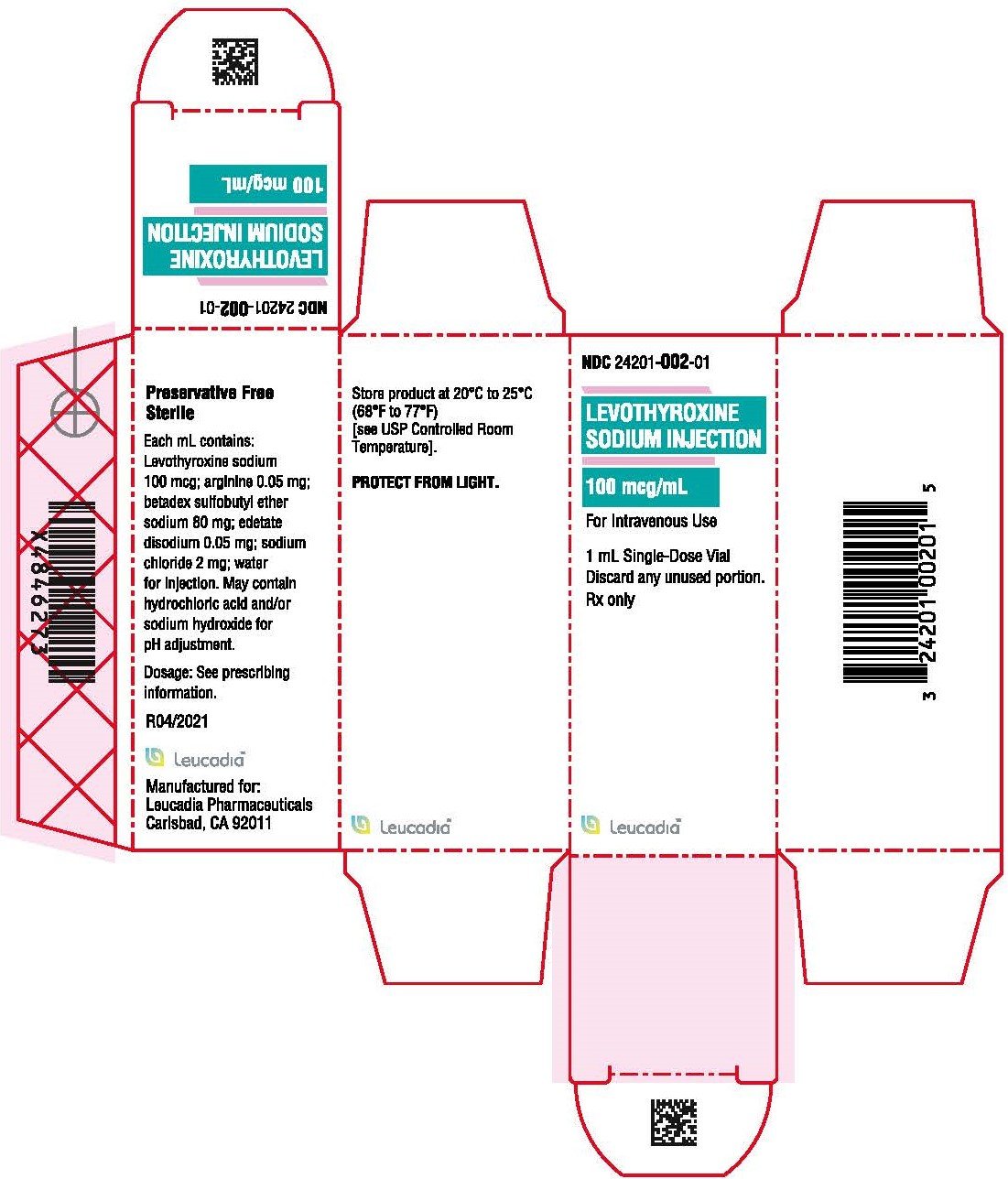 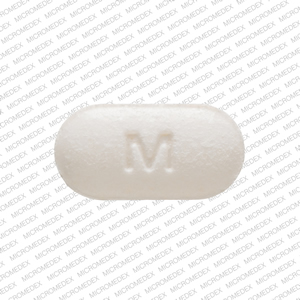