Abnormal elevation of serum potassium levels (greater than or equal to 5.5 mEq/liter) can occur with all potassium-sparing agents, including Dyrenium. Hyperkalemia is more likely to occur in patients with renal impairment and diabetes (even without evidence of renal impairment), and in the elderly or severely ill. Since uncorrected hyperkalemia may be fatal, serum potassium levels must be monitored at frequent intervals especially in patients receiving Dyrenium, when dosages are changed or with any illness that may influence renal function.

Its molecular weight is 253.27. At 50°C, triamterene is slightly soluble in water. It is soluble in dilute ammonia, dilute aqueous sodium hydroxide and dimethylformamide. It is sparingly soluble in methanol.

Triamterene has a unique mode of action; it inhibits the reabsorption of sodium ions in exchange for potassium and hydrogen ions at that segment of the distal tubule under the control of adrenal mineralocorticoids (especially aldosterone). This activity is not directly related to aldosterone secretion or antagonism; it is a result of a direct effect on the renal tubule.

The fraction of filtered sodium reaching this distal tubular exchange site is relatively small, and the amount which is exchanged depends on the level of mineralocorticoid activity. Thus, the degree of natriuresis and diuresis produced by inhibition of the exchange mechanism is necessarily limited. Increasing the amount of available sodium and the level of mineralocorticoid activity by the use of more proximally acting diuretics will increase the degree of diuresis and potassium conservation.

Triamterene occasionally causes increases in serum potassium which can result in hyperkalemia. It does not produce alkalosis, because it does not cause excessive excretion of titratable acid and ammonium.

Triamterene has been shown to cross the placental barrier and appear in the cord blood of animals.

Onset of action is 2 to 4 hours after ingestion. In normal volunteers the mean peak serum levels were 30 ng/mL at 3 hours. The average percent of drug recovered in the urine (0 to 48 hours) was 21%. Triamterene is primarily metabolized to the sulfate conjugate of hydroxytriamterene. Both the plasma and urine levels of this metabolite greatly exceed triamterene levels. Triamterene is rapidly absorbed, with somewhat less than 50% of the oral dose reaching the urine. Most patients will respond to Dyrenium (triamterene) during the first day of treatment. Maximum therapeutic effect, however, may not be seen for several days. Duration of diuresis depends on several factors, especially renal function, but it generally tapers off 7 to 9 hours after administration.

Indications and Usage for Dyrenium

Dyrenium (triamterene) is indicated in the treatment of edema associated with congestive heart failure, cirrhosis of the liver and the nephrotic syndrome; steroid-induced edema, idiopathic edema and edema due to secondary hyperaldosteronism.

Dyrenium may be used alone or with other diuretics, either for its added diuretic effect or its potassium-sparing potential. It also promotes increased diuresis when patients prove resistant or only partially responsive to thiazides or other diuretics because of secondary hyperaldosteronism.

Usage in Pregnancy. The routine use of diuretics in an otherwise healthy woman is inappropriate and exposes mother and fetus to unnecessary hazard. Diuretics do not prevent development of toxemia of pregnancy, and there is no satisfactory evidence that they are useful in the treatment of developed toxemia.

Edema during pregnancy may arise from pathological causes or from the physiologic and mechanical consequences of pregnancy. Diuretics are indicated in pregnancy (however, see PRECAUTIONS below) when edema is due to pathologic causes, just as they are in the absence of pregnancy. Dependent edema in pregnancy, resulting from restriction of venous return by the expanded uterus, is properly treated through elevation of the lower extremities and use of support hose; use of diuretics to lower intravascular volume in this case is illogical and unnecessary. There is hypervolemia during normal pregnancy which is harmful to neither the fetus nor the mother (in the absence of cardiovascular disease), but which is associated with edema, including generalized edema, in the majority of pregnant women. If this edema produces discomfort, increased recumbency will often provide relief. In rare instances, this edema may cause extreme discomfort which is not relieved by rest. In these cases, a short course of diuretics may provide relief and may be appropriate.

Anuria. Severe or progressive kidney disease or dysfunction, with the possible exception of nephrosis. Severe hepatic disease. Hypersensitivity to the drug or any of its components.

Dyrenium should not be given to patients receiving other potassium-sparing agents, such as spironolactone, amiloride hydrochloride, or other formulations containing triamterene. Two deaths have been reported in patients receiving concomitant spironolactone and Dyrenium or Dyazide®. Although dosage recommendations were exceeded in one case and in the other serum electrolytes were not properly monitored, these two drugs should not be given concomitantly.

Abnormal elevation of serum potassium levels (greater than or equal to 5.5 mEq/liter) can occur with all potassium-sparing agents, including Dyrenium. Hyperkalemia is more likely to occur in patients with renal impairment and diabetes (even without evidence of renal impairment), and in the elderly or severely ill. Since uncorrected hyperkalemia may be fatal, serum potassium levels must be monitored at frequent intervals especially in patients receiving Dyrenium, when dosages are changed or with any illness that may influence renal function.

There have been isolated reports of hypersensitivity reactions; therefore, patients should be observed regularly for the possible occurrence of blood dyscrasias, liver damage or other idiosyncratic reactions.

If hyperkalemia is present or suspected, an electrocardiogram should be obtained. If the ECG shows no widening of the QRS or arrhythmia in the presence of hyperkalemia, it is usually sufficient to discontinue Dyrenium (triamterene) and any potassium supplementation, and substitute a thiazide alone. Sodium polystyrene sulfonate may be administered to enhance the excretion of excess potassium. The presence of a widened QRS complex or arrhythmia in association with hyperkalemia requires prompt additional therapy. For tachyarrhythmia, infuse 44 mEq of sodium bicarbonate or 10 mL of 10% calcium gluconate or calcium chloride over several minutes. For asystole, bradycardia or A-V block transvenous pacing is also recommended.

The effect of calcium and sodium bicarbonate is transient and repeated administration may be required. When indicated by the clinical situation, excess K+ may be removed by dialysis or oral or rectal administration of Sodium polystyrene sulfonate. Infusion of glucose and insulin has also been used to treat hyperkalemia.

Dyrenium (triamterene) tends to conserve potassium rather than to promote the excretion as do many diuretics and, occasionally, can cause increases in serum potassium which, in some instances, can result in hyperkalemia. In rare instances, hyperkalemia has been associated with cardiac irregularities.

Electrolyte imbalance often encountered in such diseases as congestive heart failure, renal disease or cirrhosis may be aggravated or caused independently by any effective diuretic agent including Dyrenium. The use of full doses of a diuretic when salt intake is restricted can result in a low-salt syndrome.

Triamterene can cause mild nitrogen retention, which is reversible upon withdrawal of the drug, and is seldom observed with intermittent (every-other-day) therapy.

Triamterene may cause a decreasing alkali reserve, with the possibility of metabolic acidosis.

By the very nature of their illness, cirrhotics with splenomegaly sometimes have marked variations in their blood. Since triamterene is a weak folic acid antagonist, it may contribute to the appearance of megaloblastosis in cases where folic acid stores have been depleted. Therefore, periodic blood studies in these patients are recommended. They should also be observed for exacerbations of underlying liver disease.

Triamterene has been reported in renal stones in association with other calculus components. Dyrenium should be used with caution in patients with histories of renal stones.

To help avoid stomach upset, it is recommended that the drug be taken after meals.

If a single daily dose is prescribed, it may be preferable to take it in the morning to minimize the effect of increased frequency of urination on nighttime sleep.

If a dose is missed, the patient should not take more than the prescribed dose at the next dosing interval.

Hyperkalemia will rarely occur in patients with adequate urinary output, but it is a possibility if large doses are used for considerable periods of time. If hyperkalemia is observed, Dyrenium (triamterene) should be withdrawn. The normal adult range of serum potassium is 3.5 to 5.0 mEq per liter, with 4.5 mEq often being used for a reference point. Potassium levels persistently above 6 mEq per liter require careful observation and treatment. Normal potassium levels tend to be higher in neonates (7.7 mEq per liter) than in adults.

The effects of the following drugs may be potentiated when given together with triamterene: antihypertensive medication, other diuretics, preanesthetic and anesthetic agents, skeletal muscle relaxants (non-depolarizing).

Potassium-sparing agents should be used with caution in conjunction with angiotensin-converting enzyme (ACE) inhibitors due to an increased risk of hyperkalemia.

Dyrenium (triamterene) may raise blood glucose levels; for adult-onset diabetes, dosage adjustments of hypoglycemic agents may be necessary during and/or after therapy; concurrent use with chlorpropamide may increase the risk of severe hyponatremia.

Triamterene and quinidine have similar fluorescence spectra;thus, triamterene will interfere with the fluorescent measurement of quinidine.

Although hepatocellular neoplasia (exclusively adenomas) in the rat study was limited to triamterene-exposed males, incidence was not dose dependent and there was no statistically significant difference from control incidence at any dose level.

Impairment of Fertility: Studies of the effects of triamterene on animal reproductive function have not been conducted.

Reproduction studies have been performed in rats at doses as high as 20 times the Maximum Recommended Human Dose (MRHD) on the basis of body weight, and 6 times the MRHD on the basis of body-surface area, without evidence of harm to the fetus due to triamterene. Because animal reproduction studies are not always predictive of human response, this drug should be used during pregnancy only if clearly needed.

Triamterene has been shown to cross the placental barrier and appear in cord blood. The use of triamterene in pregnant women requires that the anticipated benefits be weighed against possible hazards to the fetus. These possible hazards include adverse reactions which have occurred in the adult.

Triamterene has not been studied in nursing mothers. Triamterene appears in animal milk and is likely present in human milk. If use of the drug product is deemed essential, the patient should stop nursing.

Safety and effectiveness in pediatricpatients have not been established.

In the event of overdosage, it can be theorized that electrolyte imbalance would be the major concern, with particular attention to possible hyperkalemia. Other symptoms that might be seen would be nausea and vomiting,other G.I. disturbances and weakness. It is conceivable that some hypotension could occur. As with an overdose of any drug, immediate evacuation of the stomach should be induced through emesis and gastric lavage. Careful evaluation of the electrolyte pattern and fluid balance should be made. There is no specific antidote.

Reversible acute renal failure following ingestion of 50 tablets of a product containing a combination of 50 mg triamterene and 25 mg hydrochlorothiazide has been reported.

The oral LD50 in mice is 380 mg/kg. The amount of drug in a single dose ordinarily associated with symptoms of overdose or likely to be life-threatening is not known. Although triamterene is 67% protein bound, there may be some benefit to dialysis in cases of overdosage.

Dosage should be titrated to the needs of the individual patient. When used alone, the usual starting dose is 100 mg twice daily after meals. When combined with another diuretic or antihypertensive agent, the total daily dosage of each agent should usually be lowered initially and then adjusted to the patient’s needs. The total daily dosage should not exceed 300 mg. Please refer to PRECAUTIONS−General.

When Dyrenium (triamterene) is added to other diuretic therapy or when patients are switched to Dyrenium from other diuretics, all potassium supplementation should be discontinued.

How is Dyrenium Supplied 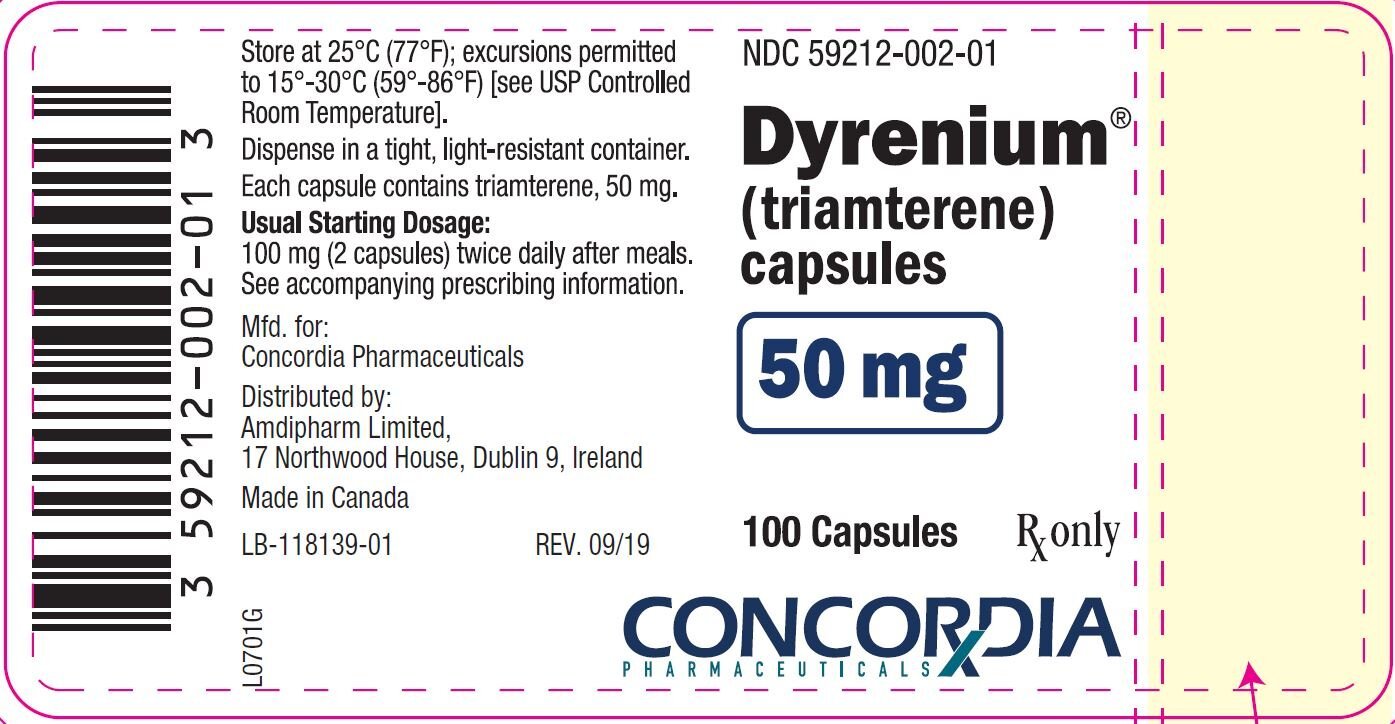 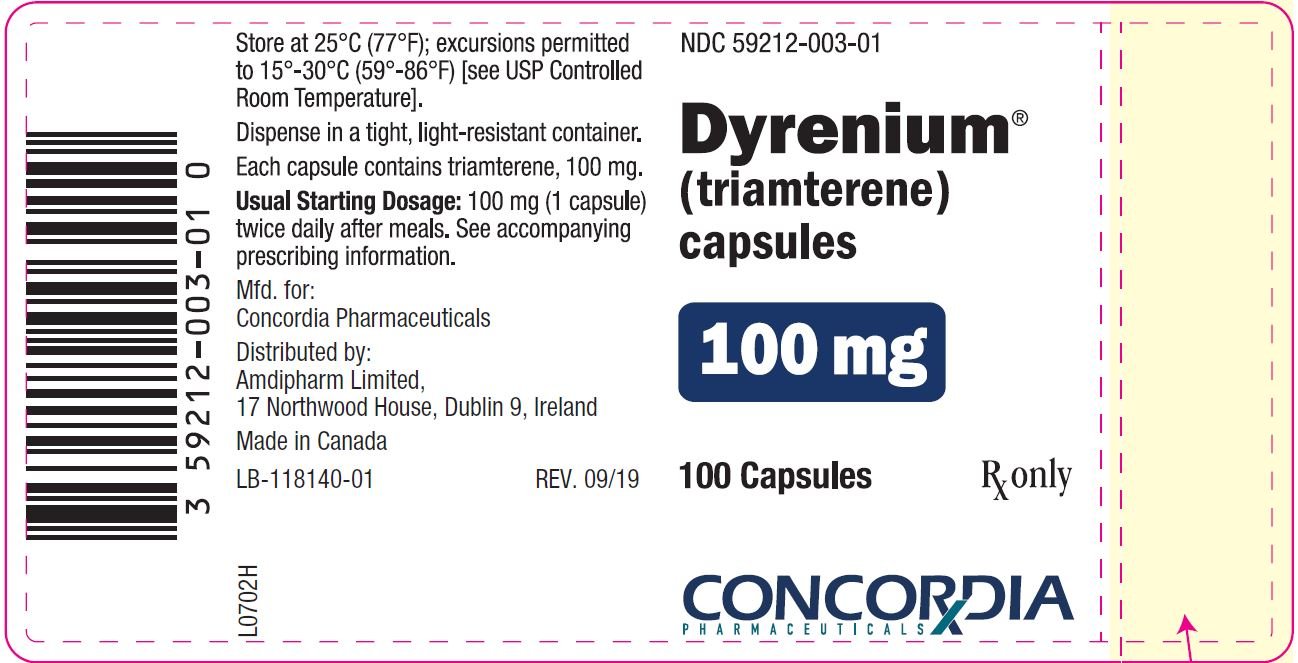 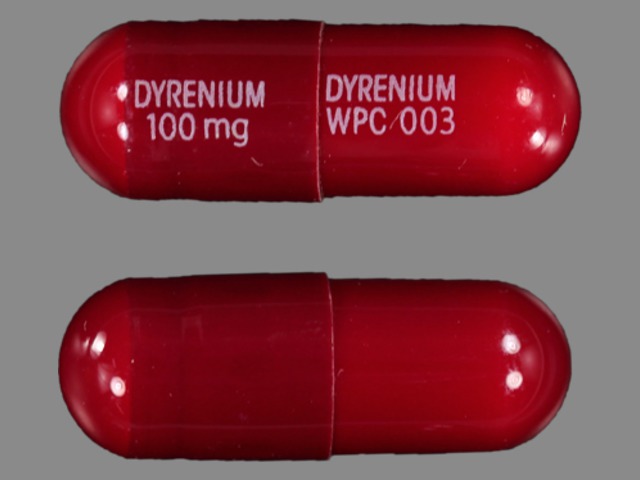