Amyl nitrite is a rapidly acting vasodilator administered by inhalation. 0.3mL is supplied in a covered thin glass capsule which is easily crushed between the fingers. Amyl nitrite is a clear, yellowish liquid having a peculiar ethereal, fruity odor. It is volatile, even at low temperatures, and is flammable. This product is stabilized with Linseed Oil Epoxy. The structural formula of amyl nitrite is:

Amyl nitrite causes a non specific relaxation of smooth muscle with the most prominent actions occurring in vascular smooth muscle. This effect on vascular smooth muscle results in coronary vasodilation and decreased systemic vascular resistance and left ventricular preload and afterload. Myocardial ischemia is relieved in patients with angina pectoris, with an abatement of chest pain and possibly other related symptoms. Amyl nitrite vapors are absorbed rapidly through the pulmonary alveoli, manifesting therapeutic effects within one minute after inhalation. The drug is metabolized rapidly, probably by hydrolytic denitration; approximately one-third of the inhaled amyl nitrite is excreted in the urine.

Amyl nitrite is indicated for the rapid relief of angina pectoris. Its effect appears within 30 seconds and lasts for approximately 3 to 5 minutes.

Since it may increase intraocular and intracranial pressures, amyl nitrite is contraindicated or should be used with great caution in patients with glaucoma, recent head trauma or cerebral hemorrhage.

Amyl nitrite can cause harm to the fetus when it is administered to a pregnant woman because it significantly reduces systemic blood pressure and blood flow on the maternal side of the placenta.

Transient episodes of dizziness, weakness, or syncope or other signs of cerebral ischemia due to postural hypotension may develop following inhalation of amyl nitrite, particularly if the patient is standing immobile. To hasten recovery, measures which facilitate venous return such as head low posture, deep breathing and movement of extremities may be used.

CAUTION: Amyl nitrite is very flammable. Do not use where it might become ignited. Keep away from open flame or sparks.

PRECAUTIONS: General - Tolerance to amyl nitrite may develop with repeated use of the drug for prolonged periods of time. Tolerance may be minimized by beginning with the smallest effective dose and alternating the drug with another coronary vasodilator.

High doses of nitrites may produce methemoglobinemia, especially in individuals with methemoglobin reductase deficiency or other metabolic abnormality that interferes with the normal conversion of methemoglobin back to haemoglobin.

Patient Information - Amyl nitrite should be taken by the patient when seated or lying down.

Drug Interactions - Taking amyl nitrite after drinking alcohol may worsen side effects and may cause severe hypotension and cardiovascular collapse.

Carcinogenesis, Mutagenesis, Fertility Impairment - Adequate long term studies to establish adverse carcinogenic potential of this drug have not been reported.

Pediatric Use - Safety and effectiveness in children have not been established.

Mild transitory headache, dizziness and flushing of the face are common with the use of amyl nitrite. The following adverse reactions may occur in susceptible patients: syncope, involuntary passing of urine and feces, hypotension, pallor, cold sweat, tachycardia, restlessness, weakness, vomiting and nausea. Excessively high doses of amyl nitrite administered chronically may cause methemoglobinemia.

Abuse - Volatile nitrites are abused for sexual stimulation, with headache as a common side effect.

Dependence - Tolerance to nitrites can develop; conditions and duration have not been established.

Symptoms - Inhaled doses of 5 to 10 drops of amyl nitrite may cause violent flushing of the face, accompanied by a feeling of imminent bursting of the head and very excessive heart action. The inhalation of larger amounts may produce a feeling of suffocation and muscular weakness. Symptoms comparable to shock may be produced (such as weakness, restlessness, sweating, pallor, nausea, vomiting, syncope and incontinence) attributable to pooling of blood in the postarteriolar vessels and failure of the venous blood to return to the heart.

Treatment - Measures which facilitate venous return such as head-low posture, deep breathing and movement of extremities may be used. The use of epinephrine aggravates the shock- like reaction. Methylene blue should be injected for treatment of severe methemoglobinemia with dyspnea. For treating cyanide poisoning, methylene blue is contraindicated where nitrites cause iatrogenic methemoglobinemia.

With the patient in recumbent or seated position a capsule of amyl nitrite is held away from the face, crushed between the fingers, and held under the patient's nose. Two to six inhalations of the vapors from the capsule are usually sufficient to promptly produce therapeutic effects. Caution is recommended to avoid inhalation of excessive amounts of the drug when it is administered by someone other than the patient. If necessary, the dose may be repeated in 3 to 5 minutes.

Capsule contents are FLAMMABLE and should be protected from light. Storage should be in a cold place. 2o - 8oC (36o- 46oF) 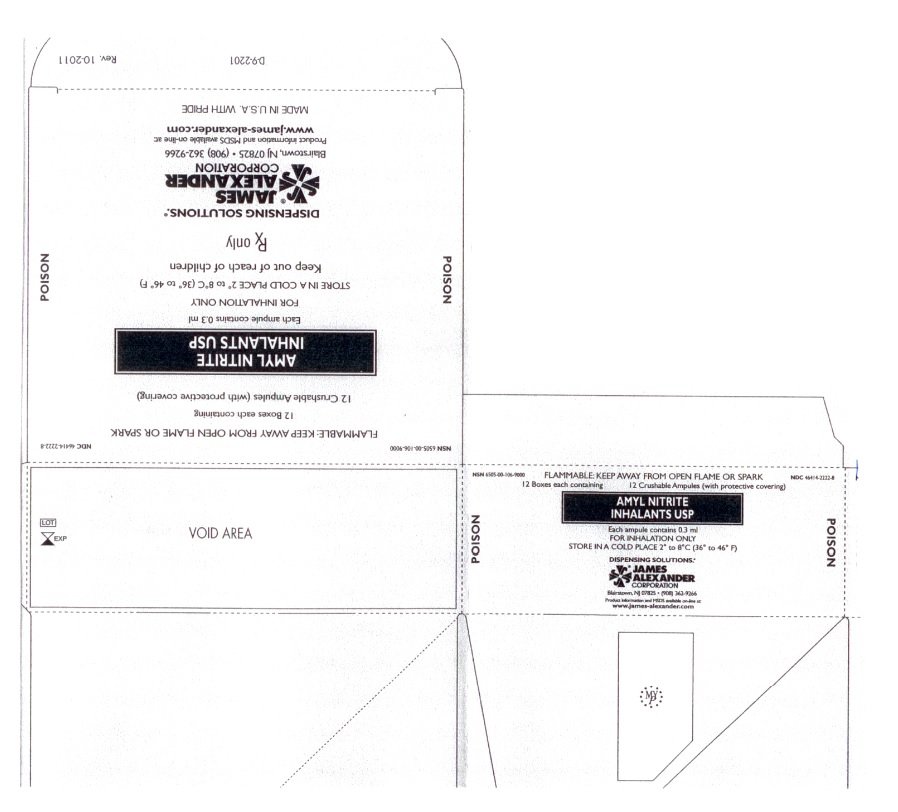 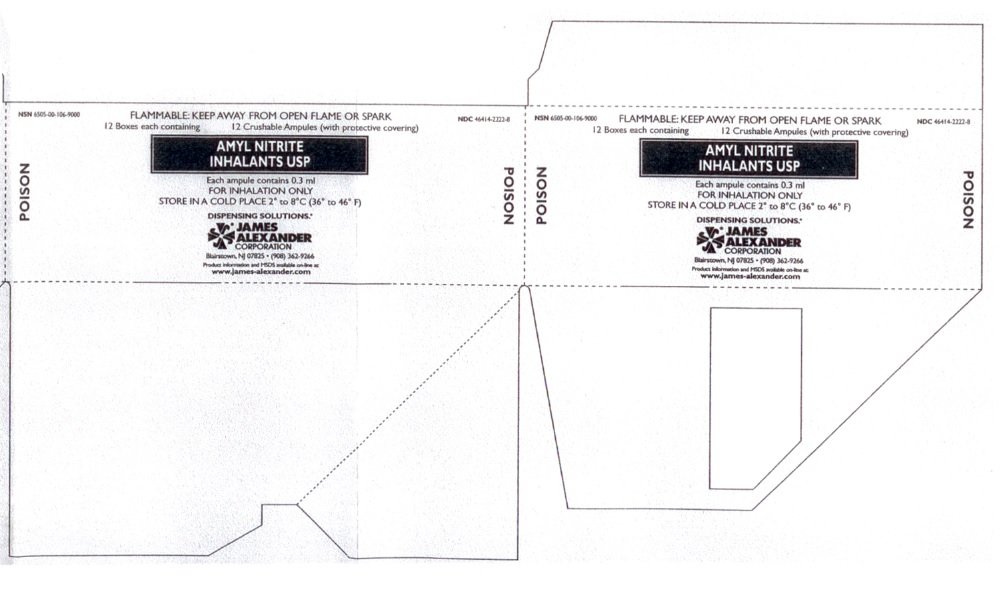 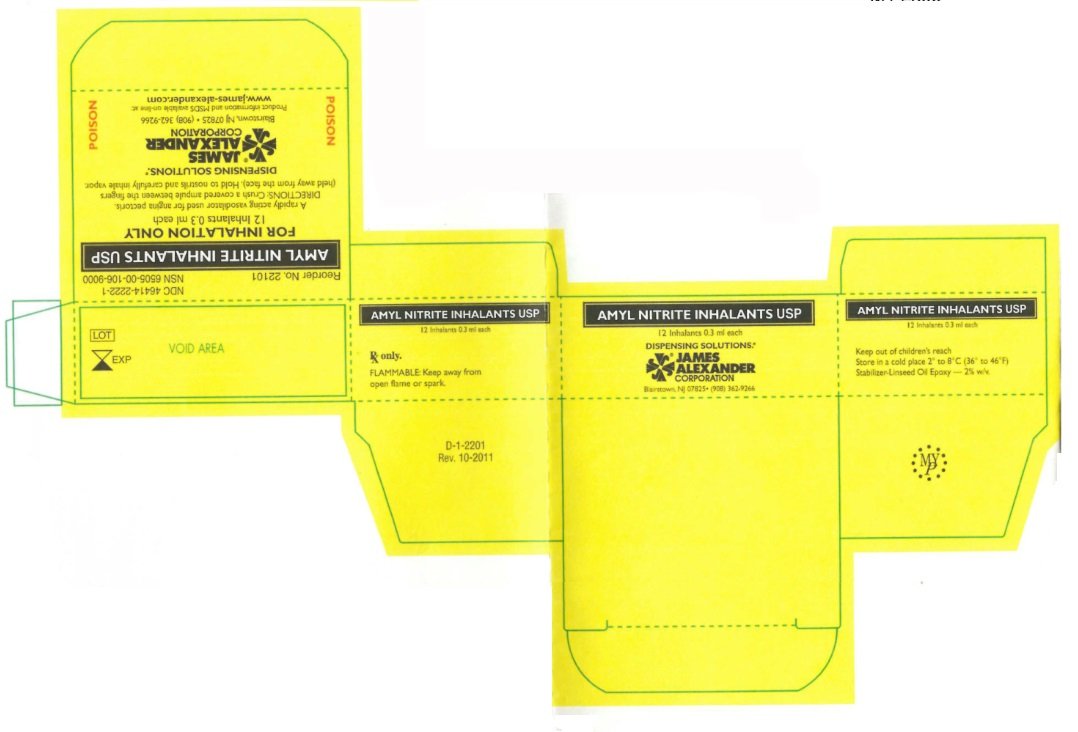 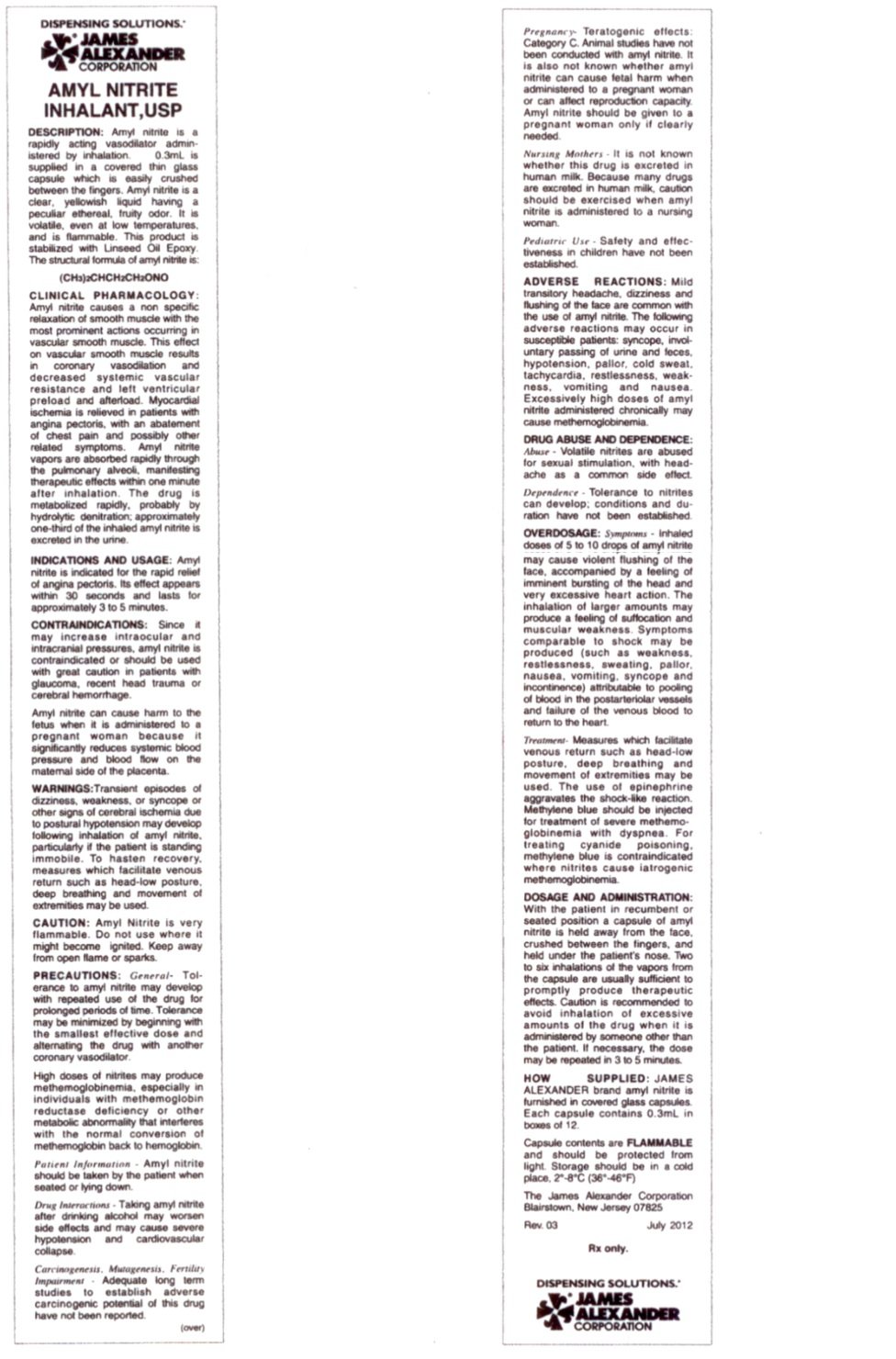