Management of major depressive disorder with or without anxiety.

Effective in both inpatient and outpatient settings.

Has been used for the short-term management of depressive episodes in patients with schizophrenia† [off-label].

Has been used as adjunctive therapy for the management of alcohol dependence† [off-label].

Has been used for the management of anxiety states† [off-label].

Administer orally after a meal or a light snack.

If drowsiness occurs, administer a major portion of the daily dosage at bedtime or reduce dosage.

Available as trazodone hydrochloride; dosage is expressed in terms of the salt.

Initially, 150 mg daily, given in divided doses. Daily dosage may be increased in 50-mg increments every 3 or 4 days based on patient’s response and tolerance.

Possible worsening of depression and/or the emergence of suicidal ideation and behavior (suicidality) or unusual changes in behavior in both adult and pediatric patients with major depressive disorder, whether or not they are taking antidepressants; may persist until clinically important remission occurs. However, suicide is a known risk of depression and certain other psychiatric disorders, and these disorders themselves are the strongest predictors of suicide.

Appropriately monitor and closely observe patients receiving trazodone for any reason, particularly during initiation of therapy (i.e., the first few months) and during periods of dosage adjustments. (See Boxed Warning and also see Pediatric Use under Cautions.)

Anxiety, agitation, panic attacks, insomnia, irritability, hostility, aggressiveness, impulsivity, akathisia, hypomania, and/or mania may be precursors to emerging suicidality. Consider changing or discontinuing therapy in patients whose depression is persistently worse or in those with emerging suicidality or symptoms that might be precursors to worsening depression or suicidality, particularly if severe, abrupt in onset, or not part of patient’s presenting symptoms. If decision is made to discontinue therapy, taper trazodone dosage as rapidly as is feasible but consider risks of abrupt discontinuance.

May unmask bipolar disorder. Trazodone is not approved for use in treating bipolar depression.

Risk of developing priapism; may require surgical or pharmacologic (e.g., epinephrine) intervention and result in impotence or permanent impairment of erectile function.

Perform pharmacologic or surgical interventions under the supervision of a urologist or a physician familiar with the procedure; procedures should not be initiated without a urologic consultation if priapism persists for >24 hours.

Do not use during initial recovery phase of MI.

Drowsiness reported in up to 50% of patients.

Not known whether trazodone is distributed into milk; caution advised.

FDA warns that a greater risk of suicidal thinking or behavior (suicidality) occurred during the first few months of antidepressant treatment compared with placebo in children and adolescents with major depressive disorder, obsessive-compulsive disorder (OCD), or other psychiatric disorders based on pooled analyses of 24 short-term, placebo-controlled trials of 9 antidepressant drugs (SSRIs and others). However, a more recent meta-analysis of 27 placebo-controlled trials of 9 antidepressants (SSRIs and others) in patients <19 years of age with major depressive disorder, OCD, or non-OCD anxiety disorders suggests that the benefits of antidepressant therapy in treating these conditions may outweigh the risks of suicidal behavior or suicidal ideation. No suicides occurred in these pediatric trials.

Carefully consider these findings when assessing potential benefits and risks of trazodone in a child or adolescent for any clinical use. (See Suicidality in the Boxed Warning and also see Worsening of Depression and Suicidality Risk under Cautions.)

Distribution into human body tissues and fluids not determined.

Widely distributed; crosses the blood-brain barrier and the placenta in animals.

Extensively metabolized in the liver via hydroxylation, oxidation, N-oxidation, and splitting of the pyridine ring. In vitro studies indicate metabolism by CYP3A4 to an active metabolite, m-chlorophenylpiperazine; other metabolic pathways not well characterized.

Excreted principally in urine (70–75%) as metabolites and in feces via biliary elimination. 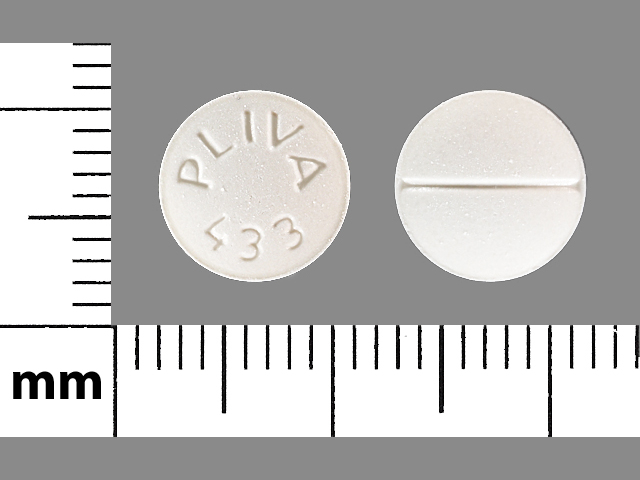