Medically reviewed by Drugs.com on Oct 4, 2021. Written by ASHP.

Used in conjunction with aspirin to reduce the risk of cardiovascular death, MI, and stroke in patients with ACS.

Dual antiplatelet therapy (DAPT) with a P2Y12 inhibitor (e.g., clopidogrel, prasugrel, ticagrelor) and aspirin is considered the current standard of care in patients with ACS.

ACC/AHA has issued guidelines for treatment options and duration of DAPT. Aspirin should almost always be continued indefinitely; decisions about specific P2Y12 inhibitor and duration of therapy should be based on risks of bleeding versus benefits of ischemic reduction, clinical judgment, and patient preference.

In ACS patients managed medically (without revascularization or reperfusion therapy) or with PCI and stent implantation (bare-metal or drug-eluting), P2Y12 inhibitor therapy should be given for at least 12 months; in patients who have tolerated DAPT without bleeding complications and do not have a high risk of bleeding, continuation of such therapy for longer than 12 months may be reasonable.

In patients undergoing CABG, P2Y12 inhibitor therapy should be resumed after surgery to complete 12 months of therapy.

Unlike clopidogrel, genetic polymorphism of the CYP2C19 isoenzyme does not appear to affect the pharmacodynamic or clinical response to ticagrelor. The Clinical Pharmacogenetics Implementation Consortium (CPIC) guidelines recommend ticagrelor as an alternative antiplatelet agent to clopidogrel in patients who are poor or intermediate metabolizers of CYP2C19.

Also used to reduce the risk of cardiovascular death, MI, and stroke in patients with a history of MI; in the principal study establishing efficacy for this indication, patients had a history of MI 1–3 years prior to study entry.

AHA/ACC states that in patients with stable ischemic heart disease (SIHD) being treated with DAPT for previous (1–3 years prior) MI, continuation of such therapy may be reasonable if tolerated without any bleeding complications.

Coronary Artery Disease but No Prior Stroke or MI

Used to reduce the risk of an initial MI or stroke in patients with established CAD who are at high risk for these thrombotic cardiovascular events.

Use in conjunction with aspirin therapy.

There is evidence supporting use of ticagrelor in reducing risk of a first MI and stroke in patients with CAD and type 2 diabetes mellitus, although treatment effect is small. Reduction in ischemic events is accompanied by increased risk of bleeding.

Used to reduce the risk of stroke in patients with acute ischemic stroke (National Institutes of Health Stroke Scale [NIHSS] ≤5) or high-risk TIA.

Use in conjunction with aspirin therapy.

Not studied in patients with more severe stroke or cardioembolic stroke; those undergoing thrombectomy or thrombolysis; and those in whom treatment was administered >24 hours after symptom onset.

Administer orally without regard to meals.

For patients unable to swallow tablets whole, may crush and mix with water. Also can administer crushed tablet in water mixture via a nasogastric tube (CH8 or greater).

If a dose is missed, take next dose at the regularly scheduled time.

Manufacturer makes no specific recommendation regarding duration of maintenance therapy; however, ticagrelor was administered for up to 12 months in the pivotal efficacy study (PLATO). Recommendations for duration of dual antiplatelet therapy can be found in ACC/AHA guidelines. (See Acute Coronary Syndrome or History of MI under Uses.)

Coronary Artery Disease but No Prior Stroke or MI

180-mg loading dose followed by maintenance dosage of 90 mg twice daily for up to 30 days.

Transitioning from Clopidogrel to Ticagrelor Therapy

No dosage adjustment required in patients with renal impairment.

Dosage adjustment based on age not required.

Overall risk of major and minor bleeding somewhat greater with ticagrelor than with clopidogrel in the PLATO trial. Increased risk principally involved non-CABG-related major bleeding, including fatal intracranial hemorrhage. Rates of major CABG-related bleeding were similar between ticagrelor and clopidogrel.

Bleeding was reported more frequently with ticagrelor compared with placebo in other preapproval studies.

In general, risk factors for bleeding include advanced age, history of bleeding disorders, female gender, renal dysfunction, performance of PCI, and concurrent use of other drugs that affect hemostasis (e.g., anticoagulants, thrombolytic agents, high dosages of aspirin, long-term use of NSAIAs).

Contraindicated in patients who are actively bleeding or who have a history of intracranial hemorrhage. Also not recommended in patients likely to undergo urgent CABG. Temporarily discontinue drug at least 5 days prior to surgery (e.g., CABG) whenever possible.

Reduced Response with Higher Aspirin Dosages in Patients with ACS

Risk of dyspnea, generally mild to moderate and self-limiting. Adverse effects on pulmonary function not observed. Mechanism of dyspnea unknown, but thought to be related to an adenosine-mediated response.

If any new, prolonged, or worsening dyspnea related to ticagrelor occurs, no specific treatment required; may continue therapy without interruption if possible. If dyspnea is intolerable and results in discontinuance of ticagrelor, consider another antiplatelet agent.

Discontinuance of Therapy in Patients with Coronary Artery Disease

If temporary discontinuance of ticagrelor required (e.g., prior to significant surgery or for bleeding), reinstitute therapy as soon as possible. Interrupt therapy for 5 days prior to surgical procedures with a major bleeding risk if possible; resume therapy when hemostasis is achieved.

Because patients with baseline increased risk of bradycardia (e.g., those with sick sinus syndrome, second- or third-degree AV block, or syncope due to bradycardia without a pacemaker) were excluded from clinical studies, some clinicians recommend caution when used in such patients.

No overall differences in efficacy or safety between geriatric and younger patients.

Pharmacokinetics and clinical efficacy not substantially altered in patients with renal impairment. (See Renal Impairment under Dosage and Administration.)

Not studied in patients with end-stage renal disease (ESRD) on dialysis; however, clinically important differences not expected in such patients receiving intermittent hemodialysis.

Ticagrelor is not dialyzable.

Metabolized principally by CYP isoenzyme 3A4. Weak inhibitor of CYP3A4/5 and potential activator of CYP3A5. Does not inhibit CYP 1A2, 2C19, or 2E1.

Plasma concentrations of ticagrelor and its major metabolite increase in a dose-dependent manner; peak concentrations achieved within approximately 1.5 and 2.5 hours, respectively.

Additional inhibition of platelet aggregation (absolute increase of 26.4%) observed in patients who transition from clopidogrel to ticagrelor therapy.

Maximum inhibition of platelet aggregation maintained for ≥8 hours after a dose. Following discontinuance, platelet activity returns to baseline after 5 days.

Individuals with mild (Child-Pugh class A) hepatic impairment had slightly higher systemic exposure to ticagrelor than those with normal hepatic function; however, no clinically important effects observed.

Individuals with severe (Clcr <30 mL/minute) renal impairment had slightly higher systemic exposure to ticagrelor than those with normal renal function; however, no effect on platelet inhibition or tolerability.

>99% for both ticagrelor and active metabolite.

Primarily eliminated in feces; <1% of a dose is recovered in urine (as parent drug and active metabolite). 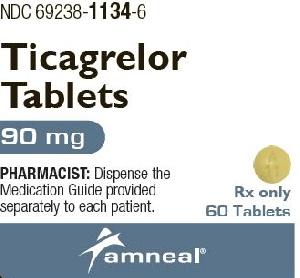