Postherpetic neuralgia (post-hur-PET-ik noo-RAL-juh) is the most common complication of shingles. The condition affects nerve fibers and skin, causing burning pain that lasts long after the rash and blisters of shingles disappear.

The signs and symptoms of postherpetic neuralgia are generally limited to the area of your skin where the shingles outbreak first occurred — most commonly in a band around your trunk, usually on one side of your body.

See a doctor at the first sign of shingles. Often the pain starts before you notice a rash. Your risk of developing postherpetic neuralgia is lessened if you begin taking antiviral medications within 72 hours of developing the shingles rash.

Once you've had chickenpox, the virus remains in your body for the rest of your life. As you age or if your immune system is suppressed, such as from medications or chemotherapy, the virus can reactivate, causing shingles.

Postherpetic neuralgia occurs if your nerve fibers are damaged during an outbreak of shingles. Damaged fibers can't send messages from your skin to your brain as they normally do. Instead, the messages become confused and exaggerated, causing chronic, often excruciating pain that can last months — or even years. 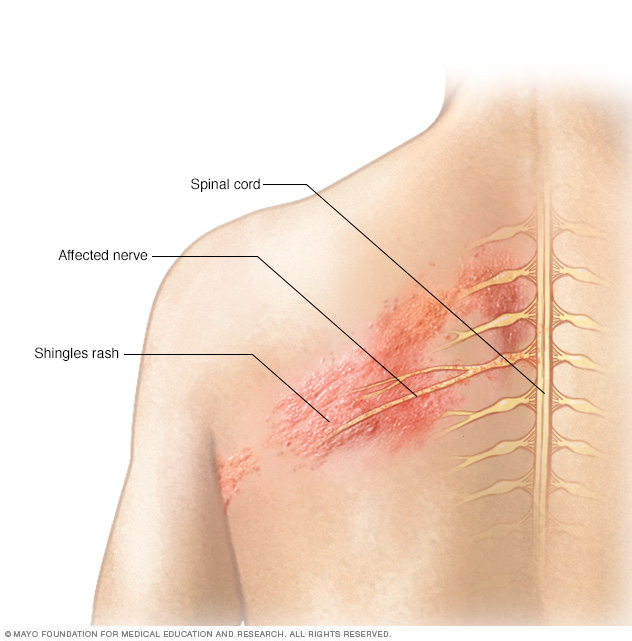 The shingles rash is associated with an inflammation of nerves beneath the skin.

When you have shingles, you might be at greater risk of developing postherpetic neuralgia as a result of:

Depending on how long postherpetic neuralgia lasts and how painful it is, people with the condition can develop other symptoms that are common with chronic pain such as:

The Centers for Disease Control and Prevention (CDC) recommends that adults 50 and older get a Shingrix vaccine to prevent shingles, even if they've had shingles or the older vaccine Zostavax. Shingrix is given in two doses, two to six months apart.

The CDC says two doses of Shingrix is more than 90 percent effective in preventing shingles and postherpetic neuralgia. Shingrix is preferred over Zostavax. The effectiveness may be sustained for a longer period of time than Zostavax. Zostavax may still be used sometimes for healthy adults age 60 and older who aren't allergic to Zostavax and who don't take immune-suppressing medications.

Your doctor will examine your skin, possibly touching it in places to determine the borders of the affected area.

In most cases, no tests are necessary.

No single treatment relieves postherpetic neuralgia for everyone. It often takes a combination of treatments to reduce the pain.

These are small, bandage-like patches that contain the topical pain-relieving medication lidocaine. These patches can be cut to fit only the affected area. You apply the patches, available by prescription or over-the-counter at a slightly lower dosage, directly to painful skin to deliver temporary relief.

A high concentration of an extract of chili peppers (capsaicin) is available as a skin patch (Qutenza) to relieve pain. Available only in your doctor's office, the patch is applied by trained personnel after using a numbing medication on the affected area.

The process takes at least two hours because you need to be monitored after the high-concentration patch is applied, but a single application decreases pain for some people for up to three months. If it works, the application can be repeated every three months.

Certain anti-seizure medications, including gabapentin (Gralise, Horizant, Neurontin) and pregabalin (Lyrica), can lessen the pain of postherpetic neuralgia. These medications stabilize abnormal electrical activity in your nervous system caused by injured nerves. Side effects include drowsiness, unclear thinking, unsteadiness and swelling in the feet.

Certain antidepressants — such as nortriptyline (Pamelor), amitriptyline, duloxetine (Cymbalta) and venlafaxine (Effexor XR) — affect key brain chemicals that play a role in both depression and how your body interprets pain. Doctors often prescribe antidepressants for postherpetic neuralgia in smaller doses than they do for depression alone.

Common side effects of these medications include drowsiness, dry mouth, lightheadedness and weight gain.

However, recent CDC guidelines urge doctors to consider treatments other than opioids for pain that isn't cancer-related, such as the pain of postherpetic neuralgia. This is based on increasing recognition of the risk of addiction and death in some people using opioids.

If prescribed, opioids need to be monitored closely, used at the lowest possible dose and considered only in situations where safer medications have failed.

Opioid medication can impair your ability to drive and should not be combined with alcohol or other drugs.

Steroids are sometimes injected into the spine (intrathecal or epidural) for postherpetic neuralgia. However, evidence of effectiveness is inconsistent. A low risk of serious side effects, including meningitis, has been associated with their use.

The following over-the-counter medications may ease the pain of postherpetic neuralgia:

You might start by seeing your family doctor. He or she may refer you to a nerve specialist (neurologist) or a doctor who specializes in treating chronic pain.

Here's information to help you get ready for your appointment.

When you make the appointment, ask if there's anything you need to do in advance, such as fasting before a specific test. Make a list of:

For postherpetic neuralgia, questions to ask your doctor include: