There are 2 disease interactions with Pepto-Bismol (bismuth subsalicylate).

The use of salicylates, primarily aspirin, in children with varicella infections or influenza-like illnesses has been associated with an increased risk of Reye's syndrome. Although a causal relationship has not been established, the majority of evidence to date seems to support the association. Most authorities, including the American Academy of Pediatrics Committee on Infectious Diseases, recommend avoiding the use of salicylates in children and teenagers with known or suspected varicella or influenza and during presumed outbreaks of influenza. If antipyretic or analgesic therapy is indicated under these circumstances, acetaminophen may be an appropriate alternative. The same precautions should also be observed with related agents such as salicylamide or diflunisal because of their structural and pharmacological similarities to salicylate.

All salicylates can interfere with the action of vitamin K and induce a dose-dependent alteration in hepatic synthesis of coagulation factors VII, IX and X. At usual recommended dosages, a slight increase in prothrombin time (PT) may occur. Therapy with salicylates, especially if given in high dosages, should be administered cautiously in patients with significant active bleeding or a hemorrhagic diathesis, including hemostatic and/or coagulation defects associated with hemophilia, vitamin K deficiency, hypoprothombinemia, thrombocytopenia, thrombocytopathy, or severe hepatic impairment. The same precaution should also be observed with the use of related agents such as salicylamide because of their structural and pharmacological similarities to salicylate.

There are 133 drug interactions with Pepto-Bismol (bismuth subsalicylate). 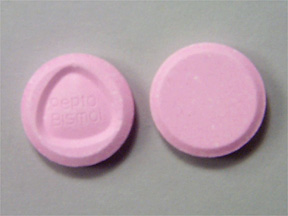