Note: This document contains side effect information about acetaminophen / diphenhydramine. Some of the dosage forms listed on this page may not apply to the brand name Tylenol PM.

What are some side effects that I need to call my doctor about right away?

What are some other side effects of this drug?

The most commonly reported adverse reactions which are also related to use are drowsiness or sleepiness.[Ref]

Frequency not reported: Severe and sometimes fatal dose-dependent hepatitis in alcoholic patients; hepatotoxicity from chronic acetaminophen therapy at therapeutic doses has occurred despite a lack of risk factors for toxicity

In a recent retrospective study of 306 patients admitted for acetaminophen overdose, 6.9% had severe liver injury but all recovered. None of the 306 patients died.[Ref]

Rare (less than 0.1%): Hypersensitivity including anaphylaxis and fixed drug eruptions

Dystonic reactions have been accompanied by dizziness, mental confusion, rigidity, lip and tongue protrusion, trismus, torticollis, and swallowing difficulties and generally resolve spontaneously. Toxic encephalopathy has been reported in a child with chicken pox treated generously with topical diphenhydramine.

Delirium has been reported in elderly patients with mild dementia following a small oral dose of diphenhydramine.[Ref]

Acute tubular necrosis usually occurs in conjunction with liver failure, but has been observed as an isolated finding in rare cases.[Ref]

Rare (less than 0.1%): Thrombocytopenia, methemoglobinemia (with resulting cyanosis in the setting of acute overdose) 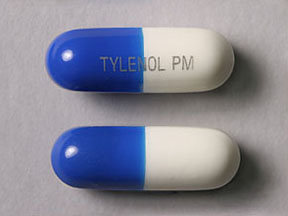