Note: This document contains side effect information about procainamide. Some dosage forms listed on this page may not apply to the brand name Procanbid.

WarningThe prolonged administration of procainamide often leads to the development of a positive anti-nuclear antibody (ANA) test, with or without symptoms of a lupus erythematosus-like syndrome. If a positive ANA titer develops, the benefit versus risks of continued procainamide therapy should be assessed.MortalityIn the National Heart, Lung, and Blood Institute's Cardiac Arrhythmia Suppression Trial (CAST), a long-term, muliticentered, randomized, double-blind study in patients with asymptomatic non-life-threatening ventricular arrhythmias who had a myocardial infarction more than six days but less than two years previously, an excessive mortality or non-fatal cardiac arrest rate (7.7%) was seen in patients treated with encainide or flecainide compared with that seen in patients assigned to carefully matched placebo-treated groups (3.0%). The average duration of treatment with encainide or flecainide in this study was 10 months.The applicability of the CAST results to other populations (eg, those without recent myocardial infarction) is uncertain. Considering the known proarrhythmic properties of procainamide and the lack of evidence of improved survival for any antiarrhythmic drug in patients without life-threatening arrhythmias, the use of procainamide hydrochloride as well as other antiarrhythmic agents should be reserved for patients with life-threatening ventricular arrhythmias.Blood DyscrasiasAgranulocytosis, bone marrow depression, neutropenia, hypoplastic anemia and thrombocytopenia in patients receiving procainamide hydrochloride have been reported at a rate of approximately 0.5%. Most of these patients received procainamide hydrochloride within the recommended dosage range. Fatalities have occurred (with approximately 20% to 25 % mortality in reported cases of agranulocytosis). Since most of these events have been noted during the first 12 weeks of therapy, it is recommended that complete blood counts including white cell, differential and platelet counts be performed at weekly intervals for the first three months of therapy, and periodically thereafter. Complete blood counts should be performed promptly if the patient develops any signs of infection (such as fever, chills, sore throat, or stomatitis), bruising or bleeding. If any of these hematologic disorders are identified, procainamide therapy should be discontinued. Blood counts usually return to normal within one month of discontinuation. Caution should be used in patients with pre-existing marrow failure or cytopenia of any type.

Serious side effects of Procanbid

Along with its needed effects, procainamide (the active ingredient contained in Procanbid) may cause some unwanted effects. Although not all of these side effects may occur, if they do occur they may need medical attention.

Check with your doctor or nurse immediately if any of the following side effects occur while taking procainamide:

Get emergency help immediately if any of the following symptoms of overdose occur while taking procainamide:

Other side effects of Procanbid

Some side effects of procainamide may occur that usually do not need medical attention. These side effects may go away during treatment as your body adjusts to the medicine. Also, your health care professional may be able to tell you about ways to prevent or reduce some of these side effects.

Cardiovascular side effects may be acute and serious, such as hypotension, polymorphous ventricular tachycardia, or asystole. Administration of intravenous procainamide (the active ingredient contained in Procanbid) in dosages that do not exceed 20 mg/min minimizes the risk of hypotension, and should be considered in patients with low blood pressure and/or cardiac dysfunction. Procainamide may induce QT interval lengthening and torsades de pointes, although less commonly than with quinidine. The possible negative inotropic side effects of procainamide, especially with high serum levels, may be deleterious to some patients with compromised cardiac function.[Ref]

Procainamide may induce the formation of a circulating immunoglobulin directed against some coagulation factors, which has been associated with deep venous thrombosis. This may induce an elevation in the partial thromboplastin time.

A case of myocarditis without pericarditis and several cases of pericarditis associated with procainamide is reported in association with a lupus-like syndrome.[Ref]

Many of the cases of procainamide-induced agranulocytosis presented with complaints of sore throat, malaise, or fever. Prompt evaluation of the complete blood count and differential cell count is recommended since rare cases of serious infection, and even death, associated with this problem have been reported.

A case of pure red cell aplasia associated with procainamide (the active ingredient contained in Procanbid) and confirmed by rechallenge, has been reported.[Ref]

Hematologic side effects are rare, but may be severe. The overall incidence of blood dyscrasias (1980 to 1992) was 0.0022% (90% of affected patients were receiving Procan SR). "Blood dyscrasia" was defined as any diagnosis of agranulocytosis, granulocytopenia, neutropenia, leukopenia, thrombocytopenia, pancytopenia, bone marrow suppression, or aplastic anemia--regardless of severity. These reversible dyscrasias do not appear to be related to drug levels. Periodic monitoring of the complete blood count and careful attention to even minor signs of infection during procainamide therapy is recommended. In addition, lupus anticoagulants, which are evident in 25% to 35% of patients with systemic lupus erythematosus, have been reported in patients treated with procainamide in the absence of other lupus-like symptoms. The presence of such immunoglobulins can lead to thromboembolic complications.[Ref]

Hypersensitivity reactions include reports of angioedema, urticarial rash, and pruritus. Such reactions may be more likely in patients with a sulfite sensitivity. Though not proven, procainamide-induced hepatitis is believed to be hypersensitivity-mediated.[Ref]

Immunologic side effects include a lupus-like syndrome. Chronic use of procainamide (the active ingredient contained in Procanbid) may induce production of an antinuclear antibody (ANA) in up to 70% of asymptomatic patients after 6 weeks of therapy. This antibody may be associated with a reversible lupus-like syndrome (myalgias, arthralgias, arthritis, and pulmonary or pericardial serositis) in rare cases. Symptoms appear in only approximately 30% of affected patients. Checking the ANA titer every other month or quarterly is recommended, although many clinicians opt to continue the drug in some patients with a positive ANA titer, taking into account the need for procainamide therapy.[Ref]

The lupus-like syndrome may manifest as arthralgias (most common), fever, chills, myalgias, pericarditis, pleuritis, pleural effusion, hepatomegaly, and hemorrhagic cardiac tamponade. Nephritis and cerebritis are not reported. If periodic monitoring reveals a high antinuclear antibody (ANA) titer, or if the patient develops lupus-like symptoms, reevaluation of the use of procainamide and consideration of aspirin and/or corticosteroid therapy is recommended.

The lupus-like syndrome associated with procainamide shows no predilection for females, is reversible upon discontinuation of procainamide, and is more common among slow acetylators.[Ref]

Gastrointestinal side effects are usually minor, and include nausea, vomiting, anorexia, and diarrhea.[Ref]

Nervous system side effects are uncommon, and include case reports of dizziness and tremors.[Ref]

Rare cases of reversible peripheral neuropathy have been associated with a procainamide-induced lupus-like syndrome.[Ref]

Musculoskeletal weakness is unusual, but may be more likely in patients with underlying myasthenia gravis (MG). At least one case of respiratory failure due to necrotizing myopathy with diaphragmatic involvement in an elderly patient without evidence of MG has been reported.[Ref]

A case of reversible mania has been reported in a patient with nontoxic serum procainamide (the active ingredient contained in Procanbid) levels.

Psychiatric side effects include euphoria, hallucinations, psychosis, and mental depression.[Ref]

Only approximately five cases of procainamide-induced granulomatous hepatitis or intrahepatic cholestasis have been reported. Of the five reported cases, all experienced fever, two had vomiting, one pruritus, and none had lymphadenopathy. The onset of signs and symptoms of liver dysfunction began 1 to 17 days after drug administration, and normalized as soon as one day to as long as several months after drug withdrawal. While the mechanism of injury is not known, most believe procainamide-induced hepatitis to be hypersensitivity-mediated.[Ref]

Hepatic side effects are rare. Rare cases of reversible cholestatic jaundice associated with procainamide have been reported. These cases were thought to be due to hypersensitivity reactions. Frequent monitoring of liver function tests is recommended in patients with hepatic insufficiency.[Ref] 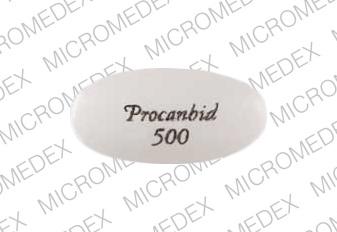