Semprex-D Capsules (acrivastine and pseudoephedrine hydrochloride) are a fixed combination product formulated for oral administration. Acrivastine is an antihistamine and pseudoephedrine is a decongestant. Each capsule contains 8 mg acrivastine and 60 mg pseudoephedrine hydrochloride and the inactive ingredients: lactose, magnesium stearate and sodium starch glycolate. The green and white capsule shell consists of gelatin, D&C Yellow No. 10, FD&C Green No. 3, and titanium dioxide. The capsules may contain one or more parabens and are printed with edible black and white inks.

The chemical name of acrivastine is (E,E)-3-[6-[1-(4-methylphenyl)-3-(1-pyrrolidinyl)-1-propenyl]-2-pyridinyl]-2-propenoic acid; the molecular formula is C22H24N2O2. As an analog of triprolidine hydrochloride, acrivastine is classified as an alkylamine antihistamine. Acrivastine is an odorless, white to pale cream crystalline powder that is soluble in chloroform and alcohol and slightly soluble in water.

Structural formulae for the active ingredients of Semprex-D Capsules are as follows:

Pseudoephedrine hydrochloride is an indirect sympathomimetic agent; that is, it releases norepinephrine from adrenergic nerves.

In vitro test and in vivo studies in animals of acrivastine and pseudoephedrine in combination failed to demonstrate evidence of any beneficial or deleterious pharmacologic interaction between the two agents.

Acrivastine was absorbed rapidly from the combination capsule following oral administration and was as bioavailable as a solution of acrivastine. After administration of Semprex-D Capsules, maximum plasma acrivastine concentrations were achieved at 1.14 ± 0.23 hours. A mass balance study in 7 healthy volunteers showed that acrivastine is primarily eliminated by the kidneys. Over a 72-hour collection period, about 84% of the administered total radioactivity was recovered in urine and about 13% in feces, for a combined recovery of about 97%. Further, 67% of the administered radioactive dose was recovered in urine as the unchanged drug, 11% as the propionic acid metabolite, and 6% as other unknown metabolites.

Acrivastine exhibits linear kinetics over dosages ranging from 2 to 32 mg t.i.d. The mean ± SD terminal half-life for acrivastine was 1.9 ± 0.3 hours following single oral doses and increased to 3.5 ± 1.9 hours at steady state. The terminal half-life for the propionic acid metabolite was 3.8 ± 1.4 hours. Because of the short half-lives of both acrivastine and its metabolites, accumulation in the plasma following multiple dosing is not expected.

The steady-state maximum acrivastine plasma concentration was 227 ± 47 ng/mL. The oral clearance, and apparent volume of distribution were 2.9 ± 0.7 mL/min/kg and 0.46 ± 0.05 L/kg, respectively, following a single oral dose; oral clearance did not change at steady state (2.86 ± 0.75 mL/min/kg). The apparent volume of distribution increased to 0.82 ± 0.6 L/kg to parallel the increase in the elimination half-life of the drug.

Acrivastine binding to human plasma proteins was 50% ± 2.0% and was concentration-independent over the range of 5 to 1000 ng/mL. The main binding protein was serum albumin although the drug was slightly bound to α-1-acid glycoprotein. No displacement interaction was observed between acrivastine and either phenytoin or theophylline. The binding of acrivastine was not affected by the presence of pseudoephedrine.

Pseudoephedrine hydrochloride was also rapidly absorbed from the combination capsule, and the capsule was as bioavailable as a solution of pseudoephedrine. Steady state maximum plasma concentration for pseudoephedrine was 498 ± 129 ng/mL. The terminal half-life, oral clearance and apparent volume of distribution were 6.2 ± 1.8 hours, 5.9 ± 1.7 mL/min/kg, and 3.0 ± 0.4 L/kg, respectively. Elimination of pseudoephedrine is primarily through the renal route as 55% to 75% of an administered dose appears unchanged in the urine. Pseudoephedrine elimination, however, is highly dependent upon urine pH; the plasma half-life decreased to about 4 hours at pH 5 and increased to 13 hours at pH 8.

Pseudoephedrine did not bind to human plasma proteins over the concentration range of 50 to 2000 ng/mL.

Acrivastine and pseudoephedrine do not influence the pharmacokinetics of the other drug when administered concomitantly.

The total body load removed by dialysis is approximately 20%, 27% and 38% for acrivastine, the propionic acid metabolite of acrivastine, and pseudoephedrine, respectively, and therefore, a supplemental dose after a dialysis session is not required.

Based on a multiple dose cross study comparison, the apparent volume of distribution for acrivastine was 44% lower in elderly (n = 36, 65-75 yr) than in young volunteers (n = 16, 19-33 yr). This difference could be attributed to the decrease in total body water that occurs with aging. Despite this difference, no appreciable differences in plasma acrivastine concentrations were seen in the elderly compared to the young, and no appreciable accumulation of acrivastine occurred in plasma at steady-state. The elimination half-life for pseudoephedrine was 18% longer in elderly (7.9 hours) than in younger subjects (6.7 hours), presumably due to the decline in average renal function that occurs with aging. Despite this difference, clearance of pseudoephedrine was not appreciably different in elderly and younger subjects. Elderly patients can therefore be given the same dosage as younger patients. Semprex-D Capsules are not recommended, however, in patients with renal impairment (see PRECAUTIONS, Use in Patients with Diminished Renal Functionand Geriatric Use).

The effect of age and sex on the pharmacokinetic parameters of acrivastine and pseudoephedrine was determined in 93 healthy volunteers who participated in various studies. All of the 93 volunteers were Caucasian (81 males and 12 females); 57 were between the ages of 18 and 38 years and 36 were between the ages of 65 and 75 years. There were no age- or sex-related differences in the pharmacokinetic parameters of either acrivastine or pseudoephedrine.

Five randomized, placebo- and/or active-controlled trials compared Semprex-D with its acrivastine and pseudoephedrine components for the symptomatic relief of seasonal allergic rhinitis. In these studies, 696 patients received four daily doses of acrivastine 8 mg plus pseudoephedrine hydrochloride 60 mg (i.e., Semprex-D Capsules or bioequivalent formulations administered concurrently) or the same doses of the components for 14 days. The combination reduced the intensity of sneezing, rhinorrhea, pruritus, and lacrimation more than pseudoephedrine and reduced the intensity of nasal congestion more than acrivastine, demonstrating a contribution of each of the components. The onset of antihistaminic and nasal decongestant actions occurred within one or two hours after the first dose of Semprex-D Capsules. Somnolence occurred in about 12% of patients given Semprex-D compared with about 6% on placebo.

Indications and Usage for Semprex-D

Semprex-D Capsules are indicated for relief of symptoms associated with seasonal allergic rhinitis such as sneezing, rhinorrhea, pruritus, lacrimation, and nasal congestion. Semprex-D Capsules should be administered when both the antihistaminic activity of acrivastine and the nasal decongestant activity of pseudoephedrine are desired (see CLINICAL PHARMACOLOGY). The efficacy of Semprex-D Capsules beyond 14 days of continuous treatment in patients with seasonal allergic rhinitis has not been adequately investigated in clinical trials.

Semprex-D Capsules have not been adequately studied for effectiveness in relieving the symptoms of the common cold.

Acrivastine is sedating in some patients. In controlled clinical trials, somnolence (i.e., drowsiness, sedation, sleepiness) was more common with Semprex-D Capsules (by an average of 6%) than with placebo (see ADVERSE EXPERIENCES).

Patients should be advised to assess their individual responses to Semprex-D Capsules before engaging in any activity requiring mental alertness, such as driving a motor vehicle or operating machinery. Concurrent use of Semprex-D Capsules with alcohol or other CNS depressants may cause additional reductions in alertness and impairment of CNS performance and should be avoided (see PRECAUTIONS, Drug Interactions).

Use in Patients with Diminished Renal Function

Acrivastine and pseudoephedrine are excreted primarily through the kidney. Both compounds therefore accumulate in patients with impaired renal function. Due to the differential effects of renal failure on the serum half-life and clearance of acrivastine and pseudoephedrine, use of Semprex-D Capsules, a fixed combination product, in patients with renal impairment (creatinine clearance ≤ 48 mL/min) is not recommended (see OVERDOSAGE and CLINICAL PHARMACOLOGY).

Because of their pseudoephedrine content, Semprex-D Capsules may reduce the antihypertensive effects of drugs that interfere with sympathetic activity. Care should be taken in the administration of Semprex-D Capsules concomitantly with other sympathomimetic amines because the combined effects on the cardiovascular system may be harmful to the patient.

Concomitant administration of Semprex-D Capsules with alcohol and other CNS depressants may result in additional reductions in alertness and impairment of CNS performance and should be avoided.

No formal drug interaction studies between Semprex-D Capsules and other possibly co-administered drugs have been performed.

In a perinatal-postnatal study in rats, acrivastine given alone at levels up to 500 mg/kg/day (2950 mg/m2/day or 124 times the recommended human daily dose) was associated with maternal and neonatal mortality at the maximum dose level. Neonatal survival was decreased in rats given a combination of acrivastine 20 mg/kg/day and pseudoephedrine 100 mg/ kg/day (118 and 590 mg/m2/day or 5 and 3 times the human dose, respectively).

Safety and effectiveness of Semprex-D Capsules in pediatric patients under the age of 12 years have not been established.

Of the total number of subjects in clinical studies of Semprex-D, 349 were 60 years of age or older and 53 were 70 years of age and older. No overall differences in safety or effectiveness were observed between these subjects and younger subjects, and other reported clinical experience has not identified differences in responses between the elderly and younger patients, but greater sensitivity of some older individuals cannot be ruled out. Antihistamines, however, as a pharmaceutical class, are more likely to cause dizziness, sedation, bladder-neck obstruction, and hypotension in elderly patients. The elderly are also more likely to have adverse reactions to sympathomimetics such as pseudoephedrine (see CLINICAL PHARMACOLOGY and WARNINGS).

This drug is known to be substantially excreted by the kidney, and the risk of toxic reactions to this drug may be greater in patients with impaired renal function. Because elderly patients are more likely to have decreased renal function, care should be taken in dose selection, and it may be useful to monitor renal function. Use of Semprex-D in patients with renal impairment (creatinine clearance ≤ 48 mL/min) is not recommended (see PRECAUTIONS, Use in Patients with Diminished Renal Function).

In controlled clinical trials, only 12 spontaneously elicited adverse events were reported with frequencies greater than 1% in the acrivastine plus pseudoephedrine hydrochloride treatment group (see Table 1).

The nature and overall frequencies of adverse events from international clinical trials (35 studies involving approximately 1600 patients) were similar to the results obtained in the US studies.

Pseudoephedrine may cause ephedrine-like reactions such as tachycardia, palpitations, headache, dizziness, or nausea (see WARNINGS and OVERDOSAGE).

There have been no reports of overdosage with Semprex-D Capsules. In the clinical trial program and in international post-marketing experience, there have been two reported overdoses with acrivastine. Doses were 72 mg and 322 mg. Both patients recovered without sequelae. Adverse events included trembling, stridor, loss of consciousness and possible convulsions in the first patient and somnolence in the second.

In a placebo-controlled, double-blind clinical trial in 18 healthy male subjects, single doses of acrivastine up to 400 mg (50 times the recommended antihistaminic dose) produced only a weak vagolytic effect, manifested as an increase in heart rate, and did not cause cardiac repolarization delays (i.e., increased QTc). Daily doses of acrivastine up to 2400 mg (75 times the recommended antihistamine dose) in an uncontrolled study in 38 cancer patients produced a 15-beats-per-minute increase in mean heart rate and occasional episodes of nausea and vomiting. The effects of acrivastine plus pseudoephedrine at single or multiple doses higher than the recommended daily dose of Semprex-D Capsules (i.e., 32 mg acrivastine plus 240 mg pseudoephedrine) on heart rate and cardiac repolarization have not been investigated in clinical trials.

The recommended dosage for adults and adolescents 12 years and older is one capsule administered orally, every 4 to 6 hours four times a day.

Semprex-D Capsules (dark green opaque cap and white opaque body) contain acrivastine 8 mg and pseudoephedrine hydrochloride 60 mg. The cap is printed with “404” in white ink, and the body is printed with “Semprex-D” in black ink.

SEMPREX is a registered trademark of Endo International plc or one of its affiliates. 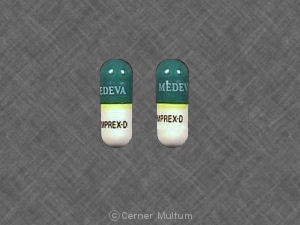