Indications and Usage for Orgovyx

Orgovyx is indicated for the treatment of adult patients with advanced prostate cancer.

Initiate treatment of Orgovyx with a loading dose of 360 mg on the first day and continue treatment with a 120 mg dose taken orally once daily at approximately the same time each day.

Orgovyx can be taken with or without food [see Clinical Pharmacology (12.3)] . Instruct patients to swallow tablets whole and not to crush or chew tablets.

Advise patients to take a missed dose of Orgovyx as soon as they remember. If the dose was missed by more than 12 hours, patients should not take the missed dose and resume with the next scheduled dose.

If treatment with Orgovyx is interrupted for greater than 7 days, restart Orgovyx with a loading dose of 360 mg on the first day, and continue with a dose of 120 mg once daily.

In patients treated with GnRH receptor agonists and antagonists for prostate cancer, treatment is usually continued upon development of nonmetastatic or metastatic castration-resistant prostate cancer.

Dose Modification for Use with P-gp Inhibitors

Avoid co-administration of Orgovyx with oral P-gp inhibitors. If co-administration is unavoidable, take Orgovyx first and separate dosing by at least 6 hours [see Drug Interactions (7.1) and Clinical Pharmacology (12.3)] . Treatment with Orgovyx may be interrupted for up to two weeks if a short course of treatment with a P-gp inhibitor is required.

Avoid co-administration of Orgovyx with combined P-gp and strong CYP3A inducers. If co-administration is unavoidable, increase the Orgovyx dose to 240 mg once daily. After discontinuation of the combined P-gp and strong CYP3A inducer, resume the recommended Orgovyx dose of 120 mg once daily [see Drug Interactions (7.1) and Clinical Pharmacology (12.3)] .

Androgen deprivation therapy, such as Orgovyx may prolong the QT/QTc interval. Providers should consider whether the benefits of androgen deprivation therapy outweigh the potential risks in patients with congenital long QT syndrome, congestive heart failure, or frequent electrolyte abnormalities and in patients taking drugs known to prolong the QT interval. Electrolyte abnormalities should be corrected. Consider periodic monitoring of electrocardiograms and electrolytes [see Clinical Pharmacology (12.2)].

The safety and efficacy of Orgovyx have not been established in females. Based on findings in animals and mechanism of action, Orgovyx can cause fetal harm and loss of pregnancy when administered to a pregnant female. In an animal reproduction study, oral administration of relugolix to pregnant rabbits during the period of organogenesis caused embryo-fetal lethality at maternal exposures that were 0.3 times the human exposure at the recommended dose of 120 mg daily based on area under the curve (AUC). Advise males with female partners of reproductive potential to use effective contraception during treatment and for 2 weeks after the last dose of Orgovyx [see Use in Specific Populations (8.1, 8.3) and Clinical Pharmacology (12.1)] .

Therapy with Orgovyx results in suppression of the pituitary gonadal system. Results of diagnostic tests of the pituitary gonadotropic and gonadal functions conducted during and after Orgovyx may be affected. The therapeutic effect of Orgovyx should be monitored by measuring serum concentrations of prostate specific antigen (PSA) periodically. If PSA increases, serum concentrations of testosterone should be measured.

The safety of Orgovyx was evaluated in HERO, a randomized (2:1), open-label, clinical study in patients with advanced prostate cancer [see Clinical Studies (14)] . Patients received orally administered Orgovyx as a loading dose of 360 mg on the first day followed by 120 mg taken orally once daily (n = 622) or received leuprolide acetate administered by depot injection at doses of 22.5 mg (n = 264) or 11.25 mg (n = 44) per local guidelines every 12 weeks (n = 308). Leuprolide acetate 11.25 mg is a dosage regimen that is not recommended for this indication in the US. Among patients who received Orgovyx, 91% were exposed for at least 48 weeks. Ninety-nine (16%) patients received concomitant radiotherapy and 17 (3%) patients received concomitant enzalutamide with Orgovyx.

Permanent discontinuation of Orgovyx due to an adverse reaction occurred in 3.5% of patients. Adverse reactions which resulted in permanent discontinuation of Orgovyx in ≥ 0.3 % of patients included atrioventricular block (0.3%), cardiac failure (0.3%), hemorrhage (0.3%), increased transaminases (0.3%), abdominal pain (0.3%), and pneumonia (0.3%).

Effect of Other Drugs on Orgovyx

Treatment with Orgovyx may be interrupted for up to 2 weeks for a short course of treatment with certain P-gp inhibitors.

If treatment with Orgovyx is interrupted for more than 7 days, resume administration of Orgovyx with a 360 mg loading dose on the first day, followed by 120 mg once daily.

If co-administration is unavoidable, increase the Orgovyx dose [see Dosage and Administration (2.3)] . After discontinuation of the combined P-gp and strong CYP3A inducer, resume the recommended dose of Orgovyx once daily.

The safety and efficacy of Orgovyx have not been established in females.

Based on findings in animals and mechanism of action, Orgovyx can cause fetal harm and loss of pregnancy when administered to a pregnant female [see Clinical Pharmacology (12.1)] . There are no human data on the use of Orgovyx in pregnant females to inform the drug-associated risk. In an animal reproduction study, oral administration of relugolix to pregnant rabbits during organogenesis caused embryo-fetal lethality at maternal exposures that were 0.3 times the human exposure at the recommended dose of 120 mg daily based on AUC ( see Data). Advise patients of the potential risk to the fetus.

In an embryo-fetal development study, oral administration of relugolix to pregnant rabbits during the period of organogenesis resulted in abortion, total litter loss, or decreased number of live fetuses at a dose of 9 mg/kg/day (approximately 0.3 times the human exposure at the recommended dose of 120 mg daily based on AUC).

The safety and efficacy of Orgovyx at the recommended dose of 120 mg daily have not been established in females. There are no data on the presence of relugolix in human milk, the effects on the breastfed child, or the effects on milk production. Relugolix and/or its metabolites were present in milk of lactating rats (see Data) .

In lactating rats administered a single oral dose of 30 mg/kg radiolabeled relugolix on post-partum day 14, relugolix and/or its metabolites were present in milk at concentrations up to 10-fold higher than in plasma at 2 hours post-dose.

Based on findings in animals and mechanism of action, advise male patients with female partners of reproductive potential to use effective contraception during treatment and for 2 weeks after the last dose of Orgovyx [see Use in Specific Populations (8.1)].

Based on findings in animals and mechanism of action, Orgovyx may impair fertility in males of reproductive potential [see Clinical Pharmacology (12.1) and Nonclinical Toxicology (13.1)].

The safety and efficacy of Orgovyx in pediatric patients have not been established.

Relugolix is a white to off-white to slightly yellow solid with a solubility of 0.04 mg per mL in water at 25°C.

Relugolix reduced LH, FSH (Figure 1), and testosterone concentrations after oral administration of the recommended loading dose of 360 mg and a 120 mg dose once daily.

Out of 622 patients, 56% had testosterone concentrations at castrate levels (< 50 ng/dL) by the first sampling timepoint at Day 4, and 97% maintained castrate levels of testosterone through 48 weeks. In a substudy of 137 patients who did not receive subsequent androgen deprivation therapy for at least 90 days after discontinuation of relugolix, the cumulative incidence rate of achieving testosterone concentrations above the lower limit of the normal range (> 280 ng/dL) or baseline at 90 days was 55% [see Clinical Studies (14)] .

In a randomized, double-blind, placebo- and positive-controlled (open-label moxifloxacin), parallel-group thorough QT/QTc study, no increase in mean QTc interval > 10 ms was identified after administration of single 60 or 360 mg doses of relugolix (0.2 or 1 times the recommended loading dose, respectively).

No clinically meaningful differences in the pharmacokinetics of relugolix were observed following consumption of a high-calorie, high-fat meal (approximately 800 to 1000 calories with 500, 220, and 124 from fat, carbohydrate, and protein, respectively).

Plasma protein binding of relugolix is 68 to 71%, primarily to albumin and to a lesser extent to α 1-acid glycoprotein. The mean blood-to-plasma ratio is 0.78.

Relugolix is metabolized primarily by CYP3A and to a lesser extent by CYP2C8 in vitro.

After oral administration of a single 80-mg radiolabeled dose of relugolix, approximately 81% of the radioactivity was recovered in feces (4.2% as unchanged) and 4.1% in urine (2.2% as unchanged).

No clinically meaningful differences in the pharmacokinetics of relugolix were observed based on age (45 to 91 years), race/ethnicity (Asian [19%], White [71%], Black/African American [6%]), body weight (41 to 193 kg), mild to severe renal impairment (creatinine clearance [CLcr] 15 to 89 mL/min, as estimated by the Cockcroft-Gault equation), or mild to moderate hepatic impairment (Child-Pugh A or B). The effect of end-stage renal disease with or without hemodialysis or severe hepatic impairment (Child-Pugh C) on the pharmacokinetics of relugolix has not been evaluated.

Combined P-gp and Strong CYP3A Inducer: Co-administration with rifampin (P-gp and strong CYP3A inducer) decreased the AUC and C max of relugolix by 55% and 23%, respectively.

Two-year carcinogenicity studies were conducted in mice at oral relugolix doses up to 100 mg/kg/day and in rats at doses up to 600 mg/kg/day. Relugolix was not carcinogenic in mice or rats at exposures up to approximately 75 or 224 times, respectively, the human exposure at the recommended dose of 120 mg daily based on AUC.

In human GnRH-receptor knock-in male mice, oral administration of relugolix decreased prostate and seminal vesicle weights at doses ≥ 3 mg/kg twice daily for 28 days. The effects of relugolix were reversible, except for testis weight, which did not fully recover within 28 days after drug withdrawal. In a 39-week repeat-dose toxicity study in monkeys, there were no significant effects on male reproductive organs at oral relugolix doses up to 50 mg/kg/day (approximately 53 times the human exposure at the recommended dose of 120 mg daily based on AUC).

A total of 934 patients were randomized to receive Orgovyx or leuprolide in a 2:1 ratio for 48 weeks:

Serum testosterone concentrations were measured at screening; on Days 1, 4, 8, 15, and 29 in the first month; then monthly until the end of the study.

The efficacy results are shown in Table 3 and the timecourse of percent change from baseline in testosterone suppression by Orgovyx and leuprolide during the 48 week treatment period are shown in Figure 2.

Figure 2: Mean (95% CI) Percent Change from Baseline in Testosterone Concentrations from Baseline to Week 49 by Treatment Group in HERO 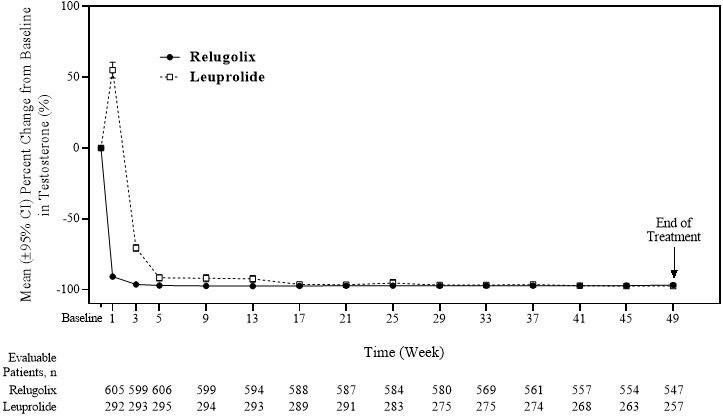 Figure 3: Cumulative Incidence of Time to Testosterone < 50 ng/dL and < 20 ng/dL in HERO 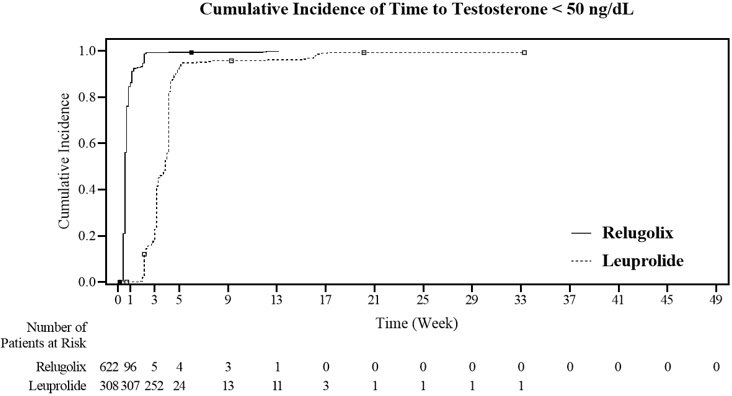 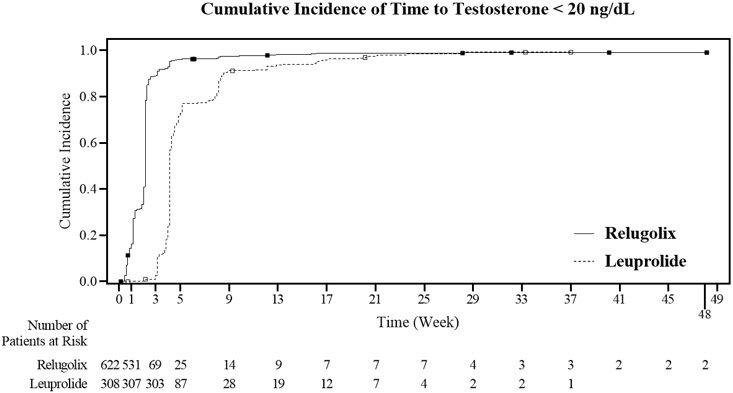 In the clinical trial, PSA levels were monitored and were lowered on average by 65% two weeks after administration of Orgovyx, 83% after 4 weeks, 92% after 3 months and remained suppressed throughout the 48 weeks of treatment. These PSA results should be interpreted with caution because of the heterogeneity of the patient population studied. No evidence has shown that the rapidity of PSA decline is related to a clinical benefit.

The 120 mg tablets are film-coated, light red, almond shaped, and debossed with "R" on one side and "120" on the other side and are supplied in two configurations, bottles and blister packs. Each bottle (NDC 72974-120-01) contains 30 tablets and a desiccant and is closed with a child-resistant induction seal cap. The blister cards contain nine tablets packaged in a carton (NDC 72974-120-02). Each Orgovyx tablet contains 120 mg of relugolix. 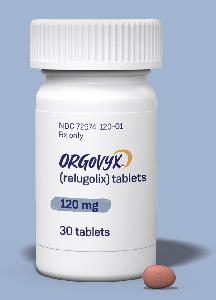