Indications and Usage for Mulpleta

Mulpleta is indicated for the treatment of thrombocytopenia in adult patients with chronic liver disease who are scheduled to undergo a procedure.

Begin Mulpleta dosing 8-14 days prior to a scheduled procedure.

Patients should undergo their procedure 2-8 days after the last dose.

The recommended dosage of Mulpleta is 3 mg taken orally once daily with or without food for 7 days. In the case of a missed dose of Mulpleta, patients should take the missed dose as soon as possible on the same day and return to the normal schedule the following day.

Obtain a platelet count prior to initiation of Mulpleta therapy and not more than 2 days before the procedure.

Tablets: 3 mg lusutrombopag as a light red, round, film-coated tablet debossed with the Shionogi trademark (

Mulpleta is a thrombopoietin (TPO) receptor agonist, and TPO receptor agonists have been associated with thrombotic and thromboembolic complications in patients with chronic liver disease. Portal vein thrombosis has been reported in patients with chronic liver disease treated with TPO receptor agonists. Portal vein thrombosis was reported in 1% (2 of 171) of Mulpleta-treated patients and 1% (2 of 170) of placebo-treated patients in 3 randomized, double-blind trials and was identified post-procedure in protocol-specified imaging. The thromboses were not associated with a marked increase in platelet count.

Consider the potential increased thrombotic risk when administering Mulpleta to patients with known risk factors for thromboembolism, including genetic pro-thrombotic conditions (Factor V Leiden, Prothrombin 20210A, Antithrombin deficiency, or Protein C or S deficiency). In patients with ongoing or prior thrombosis or absence of hepatopetal blood flow, Mulpleta should only be used if the potential benefit to the patient justifies the potential risk.

Mulpleta should not be administered to patients with chronic liver disease in an attempt to normalize platelet counts.

The following serious adverse reactions are discussed in detail in other sections of the labeling:

The safety of Mulpleta was evaluated in 3 randomized, double-blind, placebo-controlled trials, L-PLUS 1, L-PLUS 2, and M0626, in which patients with chronic liver disease and thrombocytopenia were treated with Mulpleta (N=171) or placebo (N=170) at a dose of 3 mg daily for up to 7 days prior to a scheduled procedure.

The most common adverse reactions (those occurring in at least 3%) in the Mulpleta-treated group across the pooled data from the three trials are summarized in table 1.

There are no available data on Mulpleta in pregnant women to inform the drug-associated risk. In animal reproduction studies, oral administration of lusutrombopag to pregnant rats during organogenesis and the lactation period resulted in adverse developmental outcomes. These findings were observed at exposures based on AUC that were substantially higher than the AUC observed in patients (approximately 89 times) at the recommended clinical dose of 3 mg once daily. Advise pregnant women of the potential risk to a fetus (see Data).

There is no information regarding the presence of lusutrombopag in human milk, the effects on the breastfed child, and the effects on milk production. Lusutrombopag was present in the milk of lactating rats. Due to the potential for serious adverse reactions in a breastfed child, breastfeeding is not recommended during treatment with Mulpleta and for at least 28 days after the last dose (see Clinical Considerations).

A lactating woman should interrupt breastfeeding and pump and discard breast milk during Mulpleta treatment and for 28 days after the last dose of Mulpleta in order to minimize exposure to a breastfed child.

Clinical studies of Mulpleta did not include sufficient numbers of subjects aged 65 and over to determine whether they respond differently from younger subjects. Other reported clinical experience has not identified differences in responses between the elderly and younger patients.

No antidote for Mulpleta overdose is known.

Hemodialysis is not expected to enhance the elimination of Mulpleta because lusutrombopag is highly bound to protein in plasma [see Clinical Pharmacology (12.3)].

Lusutrombopag is an orally bioavailable, small molecule TPO receptor agonist that interacts with the transmembrane domain of human TPO receptors expressed on megakaryocytes to induce the proliferation and differentiation of megakaryocytic progenitor cells from hematopoietic stem cells and megakaryocyte maturation.

Lusutrombopag upregulates the production of platelets through its agonistic effect on human TPO receptors.

At a dose 8 times the recommended dosage, Mulpleta does not prolong QT interval to any clinically relevant extent.

Lusutrombopag demonstrated dose-proportional pharmacokinetics after single doses ranging from 1 mg (0.33 times the lowest approved dosage) to 50 mg (16.7 times the highest recommended dosage). Healthy subjects administered 3 mg of lusutrombopag had a geometric mean (%CV) maximal concentration (Cmax) of 111 (20.4) ng/mL and area under the time-concentration curve extrapolated to infinity (AUC0-inf) of 2931 (23.4) ng.hr/mL. The pharmacokinetics of lusutrombopag were similar in both healthy subjects and the chronic liver disease population.

The accumulation ratios of Cmax and AUC were approximately 2 with once-daily multiple-dose administration, and steady-state plasma lusutrombopag concentrations were achieved after Day 5.

In patients with chronic liver disease, the time to peak lusutrombopag concentration (Tmax) was observed 6 to 8 hours after oral administration.

Lusutrombopag AUC and Cmax were not affected when Mulpleta was co-administered with a high-fat meal (a total of approximately 900 calories, with 500, 250, and 150 calories from fat, carbohydrate, and protein, respectively).

The mean (%CV) lusutrombopag apparent volume of distribution in healthy adult subjects was 39.5 (23.5) L. The plasma protein binding of lusutrombopag is more than 99.9%.

The terminal elimination half-life (t1/2) in healthy adult subjects was approximately 27 hours. The mean (%CV) clearance of lusutrombopag in patients with chronic liver disease is estimated to be 1.1 (36.1) L/hr.

No clinically significant differences in the pharmacokinetics of lusutrombopag were observed based on mild to moderate (Child-Pugh class A and B) hepatic impairment.

No clinically significant changes in lusutrombopag exposure were observed when co-administered with cyclosporine (an inhibitor of P-gp and BCRP) or an antacid containing a multivalent cation (calcium carbonate).

No clinically significant changes in midazolam (a CYP3A substrate) exposure were observed when co-administered with lusutrombopag.

UGT Enzymes: lusutrombopag did not induce UGT1A2, UGT1A6, or UGT2B7.

Lusutrombopag was not genotoxic based on an in vitro bacterial reverse mutation (Ames) assay, a chromosomal aberration assay with cultured Chinese hamster lung cells, and an in vivo micronucleus assay with mouse bone marrow cells.

In a fertility and early embryonic development study, lusutrombopag did not affect fertility in male and female rats at oral doses up to 100 mg/kg/day (a dose in males and females approximately 176 and 252 times, respectively, the human exposure (AUC) at the recommended clinical dose of 3 mg/day for 7 days).

The efficacy of Mulpleta for the treatment of thrombocytopenia in patients with chronic liver disease who are scheduled to undergo a procedure was evaluated in 2 randomized, double-blind, placebo-controlled trials (L-PLUS 1 (N=97) and L-PLUS 2 (N=215; NCT02389621)). Patients with chronic liver disease who were undergoing an invasive procedure and had a platelet count less than 50 × 109/L were eligible to participate. Patients undergoing laparotomy, thoracotomy, open-heart surgery, craniotomy, or organ resection were excluded. Patients with a history of splenectomy, partial splenic embolization, or thrombosis and those with Child-Pugh class C liver disease, absence of hepatopetal blood flow, or a prothrombotic condition other than chronic liver disease were not allowed to participate.

Prior to treatment, patients should fully understand and be informed of the following risks and considerations for Mulpleta.

Advise women not to breastfeed during treatment with Mulpleta and for 28 days after the last dose of Mulpleta. Advise women to pump and discard breast milk during this period [see Use in Specific Populations (8.2)].

Mulpleta is a registered trademark of Shionogi & Co., Ltd.

FOR ORAL USE ONLY 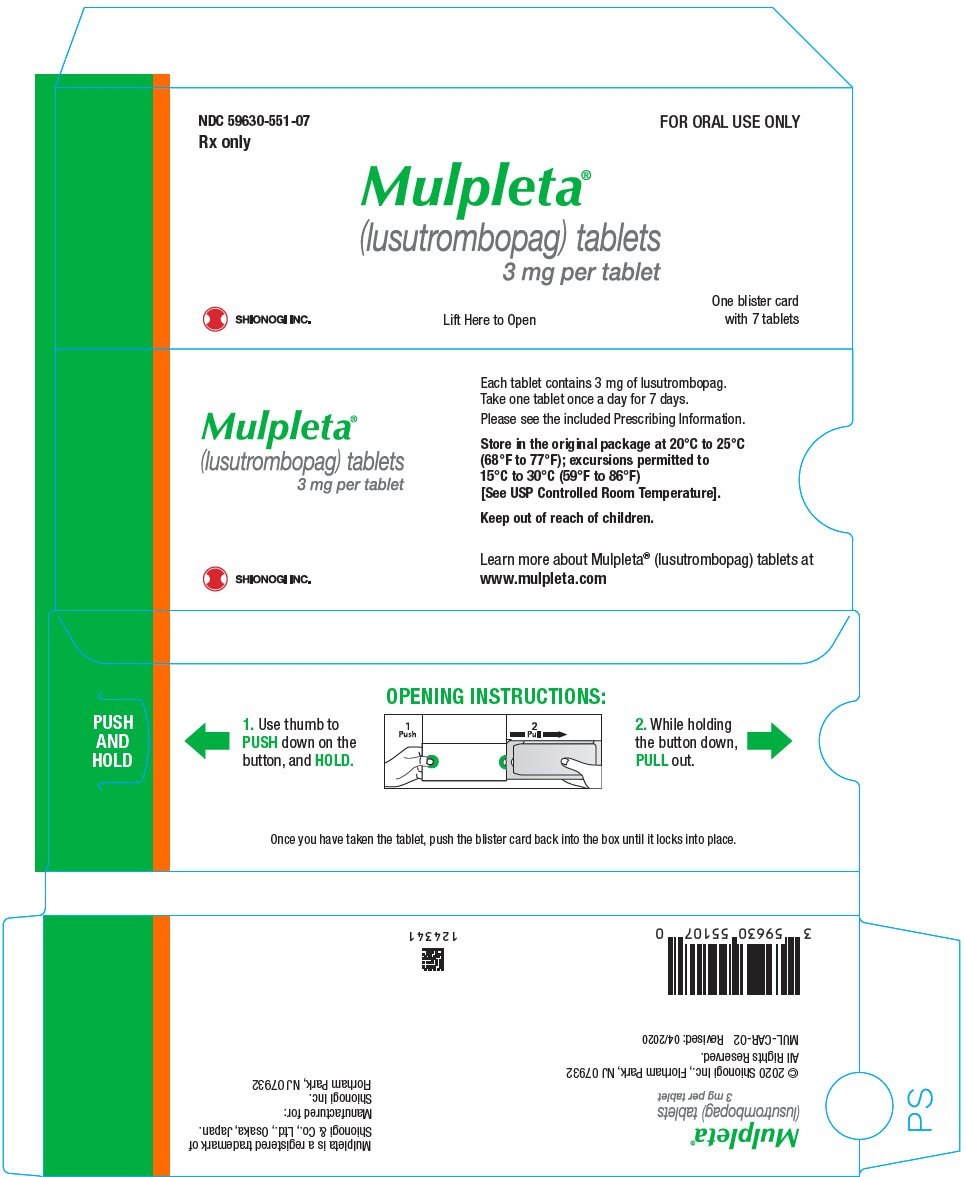 FOR ORAL USE ONLY
Physician Sample
Not For Sale

One blister card
with 7 tablets 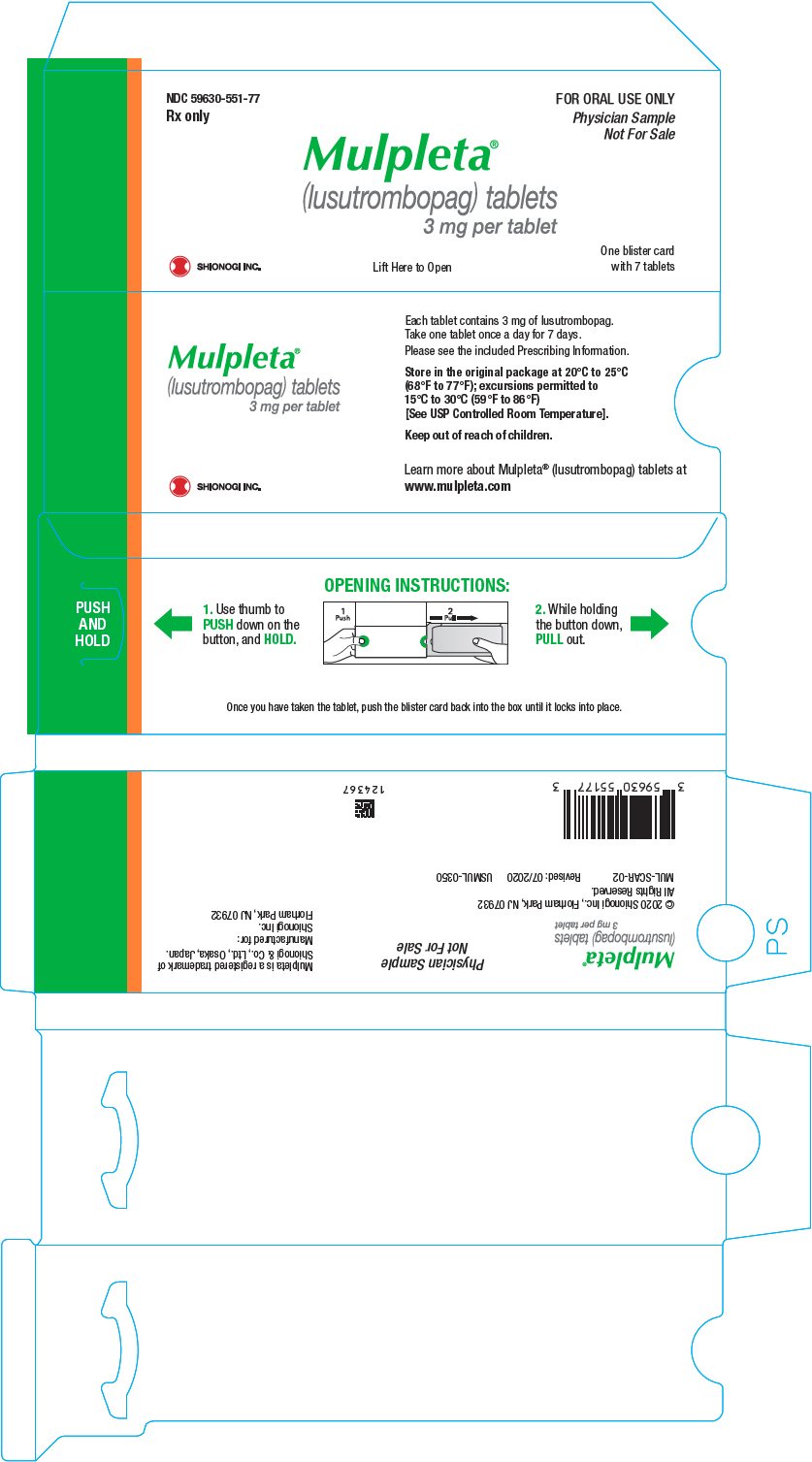 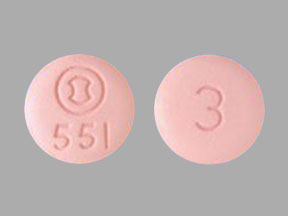