Each mL of Intensol™ for oral administration contains:

Lorazepam is a white or a practically white powder almost insoluble in water.

Studies in healthy volunteers show that in single high doses lorazepam has a tranquilizing action on the central nervous system with no appreciable effect on the respiratory or cardiovascular systems.

Lorazepam is readily absorbed with an absolute bioavailability of 90 percent. Peak concentrations in plasma occur approximately two hours following administration. The peak plasma level of lorazepam from a 2 mg dose is approximately 20 ng/mL.

The plasma levels of lorazepam are proportional to the dose given. There is no evidence of accumulation of lorazepam on administration up to six months.

Indications and Usage for Lorazepam Intensol

Lorazepam is indicated for the management of anxiety disorders or for the short-term relief of the symptoms of anxiety or anxiety associated with depressive symptoms. Anxiety or tension associated with the stress of everyday life usually does not require treatment with an anxiolytic.

The effectiveness of lorazepam in long-term use, that is, more than 4 months, has not been assessed by systematic clinical studies. The physician should periodically reassess the usefulness of the drug for the individual patient.

Lorazepam is contraindicated in patients with

•
hypersensitivity to the benzodiazepines or to any components of the formulation.
•
acute narrow-angle glaucoma.

Pre-existing depression may emerge or worsen during use of benzodiazepines including lorazepam. Lorazepam is not recommended for use in patients with a primary depressive disorder or psychosis.

Use of benzodiazepines, including lorazepam, both used alone and in combination with other CNS depressants, may lead to potentially fatal respiratory depression (see PRECAUTIONS: Clinically Significant Drug Interactions).

Use of benzodiazepines, including lorazepam, may lead to physical and psychological dependence.

As with all patients on CNS-depressant drugs, patients receiving lorazepam should be warned not to operate dangerous machinery or motor vehicles and that their tolerance for alcohol and other CNS depressants will be diminished.

The use of benzodiazepines, including lorazepam, may lead to physical and psychological dependence. The risk of dependence increases with higher doses and longer term use and is further increased in patients with a history of alcoholism or drug abuse or in patients with significant personality disorders. The dependence potential is reduced when lorazepam is used at the appropriate dose for short-term treatment. Addiction-prone individuals (such as drug addicts or alcoholics) should be under careful surveillance when receiving lorazepam or other psychotropic agents.

In general, benzodiazepines should be prescribed for short periods only (e.g. 2 to 4 weeks). Extension of the treatment period should not take place without reevaluation of the need for continued therapy. Continuous long-term use of product is not recommended. Withdrawal symptoms (e.g. rebound insomnia) can appear following cessation of recommended doses after as little as one week of therapy. Abrupt discontinuation of product should be avoided and a gradual dosage-tapering schedule followed after extended therapy.

There is evidence that tolerance develops to the sedative effects of benzodiazepines.

Lorazepam may have abuse potential, especially in patients with a history of drug and/or alcohol abuse.

In patients with depression, a possibility for suicide should be borne in mind; benzodiazepines should not be used in such patients without adequate antidepressant therapy.

Elderly or debilitated patients may be more susceptible to the sedative effects of lorazepam. Therefore, these patients should be monitored frequently and have their dosage adjusted carefully according to patient response; the initial dosage should not exceed 2 mg.

Paradoxical reactions have been occasionally reported during benzodiazepine use. Such reactions may be more likely to occur in children and the elderly. Should these occur, use of the drug should be discontinued.

Esophageal dilation occurred in rats treated with lorazepam for more than one year at 6 mg/kg/day. The no-effect dose was 1.25 mg/kg/day (approximately 6 times the maximum human therapeutic dose of 10 mg per day). The effect was reversible only when the treatment was withdrawn within two months of first observation of the phenomenon. The clinical significance of this is unknown. However, use of lorazepam for prolonged periods and in geriatric patients requires caution, and there should be frequent monitoring for symptoms of upper G.I. disease.

Safety and effectiveness of lorazepam in children of less than 12 years have not been established.

To assure the safe and effective use of lorazepam, patients should be informed that, since benzodiazepines may produce psychological and physical dependence, it is advisable that they consult with their physician before either increasing the dose or abruptly discontinuing this drug.

Some patients on lorazepam have developed leukopenia, and some have had elevations of LDH. As with other benzodiazepines, periodic blood counts and liver-function tests are recommended for patients on long-term therapy.

Concurrent administration of lorazepam with valproate results in increased plasma concentrations and reduced clearance of lorazepam. Lorazepam dosage should be reduced to approximately 50% when co-administered with valproate.

Concurrent administration of lorazepam with probenecid may result in a more rapid onset or prolonged effect of lorazepam due to increased half-life and decreased total clearance. Lorazepam dosage needs to be reduced by approximately 50% when co-administered with probenecid.

The effects of probenecid and valproate on lorazepam may be due to inhibition of glucuronidation.

Administration of theophylline or aminophylline may reduce the sedative effects of benzodiazepines, including lorazepam.

No evidence of carcinogenic potential emerged in rats during an 18-month study with lorazepam. No studies regarding mutagenesis have been performed.

Reproductive studies in animals were performed in mice, rats, and two strains of rabbits. Occasional anomalies (reduction of tarsals, tibia, metatarsals, malrotated limbs, gastroschisis, malformed skull and microphthalmia) were seen in drug-treated rabbits without relationship to dosage. Although all of these anomalies were not present in the concurrent control group, they have been reported to occur randomly in historical controls. At doses of 40 mg/kg and higher, there was evidence of fetal resorption and increased fetal loss in rabbits which was not seen at lower doses.

The clinical significance of the above findings is not known. However, an increased risk of congenital malformations associated with the use of minor tranquilizers (chlordiazepoxide, diazepam, and meprobamate) during the first trimester of pregnancy has been suggested in several studies. Because the use of these drugs is rarely a matter of urgency, the use of lorazepam during this period should be avoided. The possibility that a woman of childbearing potential may be pregnant at the time of institution of therapy should be considered. Patients should be advised that if they become pregnant, they should communicate with their physician about the desirability of discontinuing the drug.

In humans, blood levels obtained from umbilical cord blood indicate placental transfer of lorazepam and lorazepam glucuronide. Infants of mothers who ingested benzodiazepines for several weeks or more preceding delivery have been reported to have withdrawal symptoms during the postnatal period. Symptoms such as hypoactivity, hypotonia, hypothermia, respiratory depression, apnea, feeding problems, and impaired metabolic response to cold stress have been reported in neonates born of mothers who have received benzodiazepines during the late phase of pregnancy or at delivery.

Lorazepam has been detected in human breast milk; therefore, it should not be administered to breast-feeding women, unless the expected benefit to the woman outweighs the potential risk to the infant.

Clinical studies of lorazepam generally were not adequate to determine whether subjects aged 65 and over respond differently than younger subjects; however, the incidence of sedation and unsteadiness was observed to increase with age (see ADVERSE REACTIONS).

Age does not appear to have a significant effect on lorazepam kinetics (see CLINICAL PHARMACOLOGY).

Clinical circumstances, some of which may be more common in the elderly, such as hepatic or renal impairment, should be considered. Greater sensitivity (e.g., sedation) of some older individuals cannot be ruled out. In general, dose selection for an elderly patient should be cautious, and lower doses may be sufficient in these patients (see DOSAGE AND ADMINISTRATION).

Most adverse reactions to benzodiazepines, including CNS effects and respiratory depression, are dose dependent, with more severe effects occurring with high doses.

In a sample of about 3500 patients treated for anxiety, the most frequent adverse reaction to lorazepam was sedation (15.9%), followed by dizziness (6.9%), weakness (4.2%), and unsteadiness (3.4%). The incidence of sedation and unsteadiness increased with age.

Paradoxical reactions, including anxiety, excitation, agitation, hostility, aggression, rage, sleep disturbances/insomnia, sexual arousal, and hallucinations may occur. Small decreases in blood pressure and hypotension may occur but are usually not clinically significant, probably being related to the relief of anxiety produced by lorazepam.

In postmarketing experience, overdose with lorazepam has occurred predominantly in combination with alcohol and/or other drugs. Therefore, in the management of overdosage, it should be borne in mind that multiple agents may have been taken.

Overdosage of benzodiazepines is usually manifested by varying degrees of central nervous system depression ranging from drowsiness to coma. In mild cases, symptoms include drowsiness, mental confusion, paradoxical reactions, dysarthria and lethargy. In more serious cases, and especially when other drugs or alcohol were ingested, symptoms may include ataxia, hypotonia, hypotension, cardiovascular depression, respiratory depression, hypnotic state, coma, and death.

General supportive and symptomatic measures are recommended; vital signs must be monitored and the patient closely observed. When there is a risk of aspiration, induction of emesis is not recommended. Gastric lavage may be indicated if performed soon after ingestion or in symptomatic patients. Administration of activated charcoal may also limit drug absorption. Hypotension, though unlikely, usually may be controlled with norepinephrine bitartrate injection. Lorazepam is poorly dialyzable. Lorazepam glucuronide, the inactive metabolite, may be highly dialyzable.

The benzodiazepine antagonist flumazenil may be used in hospitalized patients as an adjunct to, not as a substitute for, proper management of benzodiazepine overdose. The prescriber should be aware of a risk of seizure in association with flumazenil treatment, particularly in long-term benzodiazepine users and in cyclic antidepressant overdose. The complete flumazenil package insert including CONTRAINDICATIONS, WARNINGS, and PRECAUTIONS should be consulted prior to use.

Proper Use of an Intensol™

An Intensol is a concentrated oral solution as compared to standard oral liquid medications. It is recommended that an Intensol be mixed with liquid or semi-solid food such as water, juices, soda or soda-like beverages, applesauce and puddings.

Use only the calibrated dropper provided with this product. Draw into the dropper the amount prescribed for a single dose. Then squeeze the dropper contents into a liquid or semi-solid food. Stir the liquid or food gently for a few seconds. The Intensol formulation blends quickly and completely. The entire amount of the mixture, of drug and liquid or drug and food, should be consumed immediately. Do not store for future use.

Lorazepam is administered orally. For optimal results, dose, frequency of administration, and duration of therapy should be individualized according to patient response.

The usual range is 2 mg/day to 6 mg/day given in divided doses, the largest dose being taken before bedtime, but the daily dosage may vary from 1 mg/day to 10 mg/day.

For anxiety, most patients require an initial dose of 2 mg/day to 3 mg/day given b.i.d. or t.i.d.

For insomnia due to anxiety or transient situational stress, a single daily dose of 2 mg to 4 mg may be given, usually at bedtime.

For elderly or debilitated patients, an initial dosage of 1 mg/day to 2 mg/day in divided doses is recommended, to be adjusted as needed and tolerated.

How is Lorazepam Intensol Supplied

The 2 mg per mL oral concentrate is supplied as a clear colorless solution.

Dispense only in the bottle and only with 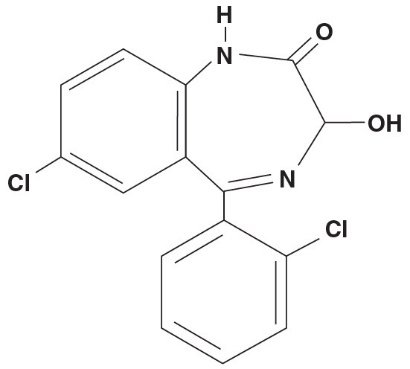