Indications and Usage for Kerendia

Prior to Initiation of Kerendia

The recommended starting dose of Kerendia is based on eGFR and is presented in Table 1.

For patients who are unable to swallow whole tablets, Kerendia may be crushed and mixed with water or soft foods such as applesauce immediately prior to use and administered orally [see Clinical Pharmacology (12.3)].

The target daily dose of Kerendia is 20 mg.

* If eGFR has decreased by more than 30% compared to previous measurement, maintain 10 mg dose.

Direct a patient to take a missed dose as soon as possible after it is noticed, but only on the same day. If this is not possible, the patient should skip the dose and continue with the next dose as prescribed.

Kerendia is available as a film-coated, oblong tablet in two strengths.

Kerendia is contraindicated in patients:

The risk for developing hyperkalemia increases with decreasing kidney function and is greater in patients with higher baseline potassium levels or other risk factors for hyperkalemia. Measure serum potassium and eGFR in all patients before initiation of treatment with Kerendia and dose accordingly [see Dosage and Administration (2.1)]. Do not initiate Kerendia if serum potassium is > 5.0 mEq/L.

Measure serum potassium periodically during treatment with Kerendia and adjust dose accordingly [see Dosage and Administration (2.3)]. More frequent monitoring may be necessary for patients at risk for hyperkalemia, including those on concomitant medications that impair potassium excretion or increase serum potassium [see Drug Interactions (7.1), 7.2)].

The following serious adverse reactions are discussed elsewhere in the labeling:

The safety of Kerendia was evaluated in the randomized, double-blind, placebo-controlled, multicenter pivotal phase 3 study FIDELIO-DKD. In this study, 2827 patients received Kerendia (10 or 20 mg once daily) and 2831 received placebo. For patients in the Kerendia group, the mean duration of treatment was 2.2 years.

The most frequently reported (≥ 10%) adverse reaction was hyperkalemia [see Warnings and Precautions (5.1)]. Hospitalization due to hyperkalemia for the Kerendia group was 1.4% versus 0.3% in the placebo group.

Table 3 shows adverse reactions in FIDELIO-DKD that occurred more commonly on Kerendia than on placebo, and in at least 1% of patients treated with Kerendia.

Initiation of Kerendia may cause an initial small decrease in estimated GFR that occurs within the first 4 weeks of starting therapy, and then stabilizes. In a study that included patients with chronic kidney disease associated with type 2 diabetes, this decrease was reversible after treatment discontinuation.

Effects of other drugs on Kerendia

Kerendia is a CYP3A4 substrate. Concomitant use with a moderate or weak CYP3A4 inhibitor increases finerenone exposure [see Clinical Pharmacology (12.3)], which may increase the risk of Kerendia adverse reactions. Monitor serum potassium during drug initiation or dosage adjustment of either Kerendia or the moderate or weak CYP3A4 inhibitor, and adjust Kerendia dosage as appropriate [see Dosing and Administration (2.3) and Drug Interaction (7.2)].

There are no available data on Kerendia use in pregnancy to evaluate for a drug-associated risk of major birth defects, miscarriage or adverse maternal or fetal outcomes. Animal studies have shown developmental toxicity at exposures about 4 times those expected in humans. (see Data). The clinical significance of these findings is unclear.

In the embryo-fetal toxicity study in rats, finerenone resulted in reduced placental weights and signs of fetal toxicity, including reduced fetal weights and retarded ossification at the maternal toxic dose of 10 mg/kg/day corresponding to an AUCunbound of 19 times that in humans. At 30 mg/kg/day, the incidence of visceral and skeletal variations was increased (slight edema, shortened umbilical cord, slightly enlarged fontanelle) and one fetus showed complex malformations including a rare malformation (double aortic arch) at an AUCunbound of about 25 times that in humans. The doses free of any findings (low dose in rats, high dose in rabbits) provide safety margins of 10 to 13 times for the AUCunbound expected in humans.

There are no data on the presence of finerenone or its metabolite in human milk, the effects on the breastfed infant or the effects of the drug on milk production. In a pre- and postnatal developmental toxicity study in rats, increased pup mortality and lower pup weight were observed at about 4 times the AUCunbound expected in humans. These findings suggest that finerenone is present in rat milk [see Use in Specific Populations (8.1) and Data]. When a drug is present in animal milk, it is likely that the drug will be present in human milk. Because of the potential risk to breastfed infants from exposure to Kerendia, avoid breastfeeding during treatment and for 1 day after treatment.

The safety and efficacy of Kerendia have not been established in patients below 18 years of age.

Of the 2827 patients who received Kerendia in the FIDELIO-DKD study, 58% of patients were 65 years and older, and 15% were 75 years and older. No overall differences in safety or efficacy were observed between these patients and younger patients. No dose adjustment is required.

Avoid use of Kerendia in patients with severe hepatic impairment (Child Pugh C).

No dosage adjustment is recommended in patients with mild or moderate hepatic impairment (Child Pugh A or B).

In the event of suspected overdose, immediately interrupt or reduce Kerendia treatment. The most likely manifestation of overdose is hyperkalemia. If hyperkalemia develops, standard treatment should be initiated.

Finerenone is unlikely to be efficiently removed by hemodialysis given its fraction bound to plasma proteins of about 90%.

Kerendia contains finerenone, a nonsteroidal mineralocorticoid receptor antagonist. Finerenone’s chemical name is (4S)-4-(4-cyano-2- methoxyphenyl)-5-ethoxy-2,8-dimethyl-1,4-dihydro-1,6-naphthyridine-3-carboxamide. The molecular formula is C21H22N4O3 and the molecular weight is 378.43 g/mol. The structural formula is: 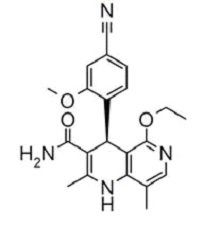 Finerenone is a white to yellow crystalline powder. It is practically insoluble in water; and sparingly soluble in 0.1 M HCl, ethanol, and acetone.

Finerenone is a nonsteroidal, selective antagonist of the mineralocorticoid receptor (MR), which is activated by aldosterone and cortisol and regulates gene transcription. Finerenone blocks MR mediated sodium reabsorption and MR overactivation in both epithelial (e.g., kidney) and nonepithelial (e.g., heart, and blood vessels) tissues. MR overactivation is thought to contribute to fibrosis and inflammation. Finerenone has a high potency and selectivity for the MR and has no relevant affinity for androgen, progesterone, estrogen, and glucocorticoid receptors.

In FIDELIO-DKD, a randomized, double-blind, placebo-controlled, multicenter study in adult patients with chronic kidney disease associated with type 2 diabetes, the placebo-corrected relative reduction in urinary albumin-to-creatinine ratio (UACR) in patients randomized to finerenone was 31% at Month 4 (95% CI 29-34%) and remained stable for the duration of the trial.

At a dose 4 times the maximum approved recommended dose, finerenone does not prolong the QT interval to any clinically relevant extent.

Finerenone is completely absorbed after oral administration but undergoes metabolism resulting in absolute bioavailability of 44%. Finerenone Cmax was achieved between 0.5 and 1.25 hours after dosing.

The terminal half-life of finerenone is about 2 to 3 hours, and the systemic blood clearance is about 25 L/h.

Finerenone is primarily metabolized by CYP3A4 (90%) and to a lesser extent by CYP2C8 (10%) to inactive metabolites.

There are no clinically significant effects of age (18 to 79 years), sex, race/ethnicity (White, Asian, Black, and Hispanic), or weight (58 to 121 kg) on the pharmacokinetics of finerenone.

There were no clinically relevant differences in finerenone AUC or Cmax values in patients with eGFR 15 to < 90 mL/min/1.73m2 compared to eGFR ≥ 90 mL/min/1.73 m2. For dosing recommendations based on eGFR and serum potassium levels see Dosage and Administration (2).

There was no clinically significant effect on finerenone exposure in cirrhotic patients with mild hepatic impairment (Child Pugh A).

Finerenone mean AUC was increased by 38% and Cmax was unchanged in cirrhotic patients with moderate hepatic impairment (Child Pugh B) compared to healthy control subjects.

The effect of severe hepatic impairment (Child Pugh C) on finerenone exposure was not studied.

Finerenone was non-genotoxic in an in vitro bacterial reverse mutation (Ames) assay, the in vitro chromosomal aberration assay in cultured Chinese hamster V79 cells, or the in vivo micronucleus assay in mice.

In 2-year carcinogenicity studies, finerenone did not show a statistically significant increase in tumor response in Wistar rats or in CD1 mice. In male mice, Leydig cell adenoma was numerically increased at a dose representing 26 times the AUCunbound in humans and is not considered clinically relevant. Finerenone did not impair fertility in male rats but impaired fertility in female rats at 20 times AUC to the maximum human exposure.

The FIDELIO-DKD study was a randomized, double-blind, placebo-controlled, multicenter study in adult patients with chronic kidney disease (CKD) associated with type 2 diabetes (T2D), defined as either having an UACR of 30 to 300 mg/g, eGFR 25 to 60 mL/min/1.73 m2 and diabetic retinopathy, or as having an UACR of ≥300 mg/g and an eGFR of 25 to 75 mL/min/1.73 m2. The trial excluded patients with known significant non-diabetic kidney disease. All patients were to have a serum potassium ≤4.8 mEq/L at screening and be receiving standard of care background therapy, including a maximum tolerated labeled dose of an angiotensin-converting enzyme inhibitor (ACEi) or angiotensin receptor blocker (ARB). Patients with a clinical diagnosis of chronic heart failure with reduced ejection fraction and persistent symptoms (New York Heart Association class II to IV) were excluded. The starting dose of Kerendia was based on screening eGFR (10 mg once daily in patients with an eGFR of 25 to <60 mL/min/1.73 m2 and 20 mg once daily in patients with an eGFR ≥60 mL/min/1.73 m2). The dose of Kerendia could be titrated during the study, with a target dose of 20 mg daily.

The primary objective of the study was to determine whether Kerendia reduced the incidence of a sustained decline in eGFR of ≥40%, kidney failure (defined as chronic dialysis, kidney transplantation, or a sustained decrease in eGFR to <15 mL/min/1.73m2), or renal death.

Kerendia reduced the incidence of the primary composite endpoint of a sustained decline in eGFR of ≥40%, kidney failure, or renal death (HR 0.82, 95% CI 0.73-0.93, p=0.001) as shown in Table 4 and Figure 1. The treatment effect reflected a reduction in a sustained decline in eGFR of ≥40% and progression to kidney failure. There were few renal deaths during the trial.

The treatment effect on the primary and secondary composite endpoints was generally consistent across subgroups. 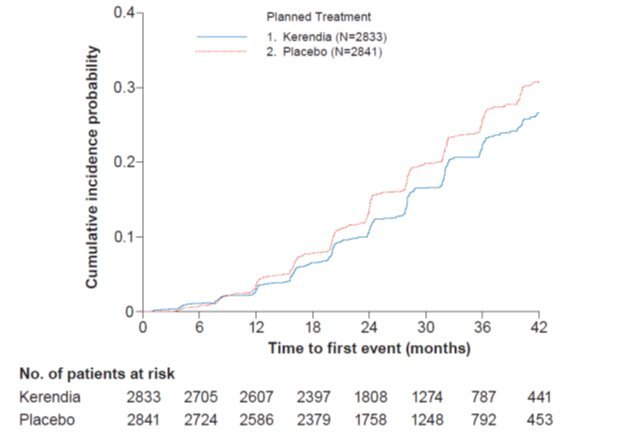 Figure 1: Time to first occurrence of kidney failure, sustained decline in eGFR ≥40% from baseline, or renal death in the FIDELIO-DKD stud 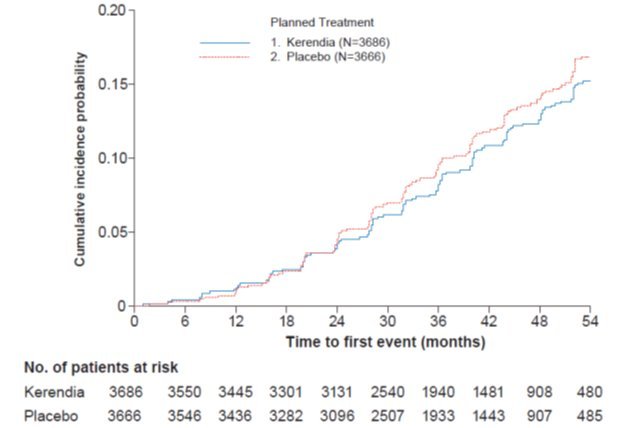 Advise patients to avoid strong or moderate CYP3A4 inducers and to find alternative medicinal products with no or weak potential to induce CYP3A4 [see Drug Interactions (7.1)]

Avoid concomitant intake of grapefruit or grapefruit juice as it is expected to increase the plasma concentration of finerenone [see Drug Interactions (7.1)].

Advise women that breastfeeding is not recommended at the time of treatment with Kerendia and for 1 day after treatment [see Use in Specific Populations (8.2)]. 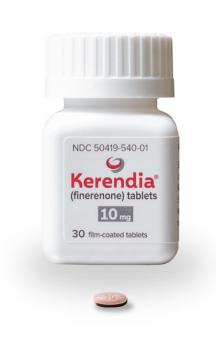