Indications and Usage for Indomethacin Injection

For intravenous administration only.

Dosage recommendations for closure of the ductus arteriosus depend on the age of the infant at the time of therapy. A course of therapy is defined as three intravenous doses of Indomethacin for Injection given at 12 to 24 hour intervals, with careful attention to urinary output. If anuria or marked oliguria (urinary output <0.6 mL/kg/hr) is evident at the scheduled time of the second or third dose of Indomethacin for Injection, do not give additional doses until laboratory studies indicate that renal function has returned to normal [see Warnings and Precautions (5.7)].

Dosage according to age is as follows:

If the neonate remains unresponsive to therapy with Indomethacin for Injection after 2 courses, surgery may be necessary for closure of the ductus arteriosus.

Parenteral drug products should be inspected visually for particulate matter and discoloration prior to administration whenever solution and container permit.

The reconstituted solution, pH 6.0 to 7.5, is clear, slightly yellow and essentially free from visible particles.

Prepare the solution with 1 to 2 mL of preservative-free Sterile Sodium Chloride Injection, 0.9 percent or preservative-free Sterile Water for Injection. Benzyl alcohol as a preservative has been associated with toxicity in neonates. Therefore, do not use diluents that contain preservatives. If 1 mL of diluent is used, the concentration of indomethacin in the solution will equal approximately 0.1 mg/0.1 mL; if 2 mL of diluent are used, the concentration of the solution will equal approximately 0.05 mg/0.1 mL. Discard any unused portion of the solution as it does not contain a preservative. Prepare a fresh solution just prior to each administration. Once reconstituted, the indomethacin solution may be injected intravenously. While the optimal rate of injection has not been established, published literature suggests an infusion rate over 20 to 30 minutes.

Further dilution with intravenous infusion solutions is not recommended.

Indomethacin for Injection is supplied in single dose vials containing 1 mg of indomethacin as a sterile lyophilized powder or plug for reconstitution.

Indomethacin for Injection is contraindicated in neonates:

Indomethacin may mask the usual signs and symptoms of infection. Therefore, the physician must be continually on the alert for this and should use the drug with extra care in the presence of existing controlled infection.

Severe hepatic reactions have been reported in adults treated chronically with oral indomethacin for arthritic disorders. [For further information, see package insert for oral indomethacin]. If clinical signs and symptoms consistent with liver disease develop in the neonate, or if systemic manifestations occur, discontinue Indomethacin for Injection.

Indomethacin for Injection may cause significant reduction in urine output (50 percent or more) with concomitant elevations of blood urea nitrogen and creatinine, and reductions in glomerular filtration rate and creatinine clearance. These effects in most neonates are transient, disappearing with cessation of therapy with Indomethacin for Injection. However, because adequate renal function can depend upon renal prostaglandin synthesis, Indomethacin for Injection may precipitate renal insufficiency, including acute renal failure, especially in neonates with other conditions that may adversely affect renal function (e.g., extracellular volume depletion from any cause, congestive heart failure, sepsis, concomitant use of any nephrotoxic drug, hepatic dysfunction). When significant suppression of urine volume occurs after a dose of Indomethacin for Injection, do not give additional doses until urine output returns to normal levels.

Administer Indomethacin for Injection carefully to avoid extravascular injection or leakage as the solution may be irritating to tissue.

In a double-blind, placebo-controlled trial of 405 premature infants weighing less than or equal to 1,750 g with evidence of large ductal shunting, in those neonates treated with indomethacin (n=206), there was a statistically significantly greater incidence of bleeding problems, including gross or microscopic bleeding into the gastrointestinal tract, oozing from the skin after needle stick, pulmonary hemorrhage, and disseminated intravascular coagulopathy. There was no statistically significant difference between treatment groups in intracranial hemorrhage.

The incidences of retrolental fibroplasia (grades III and IV) and pneumothorax in neonates treated with Indomethacin for Injection were no greater than in placebo controls and were statistically significantly lower than in surgically-treated neonates.

The following additional adverse reactions in neonates have been reported from the collaborative study, anecdotal case reports, from other studies using rectal, oral, or intravenous indomethacin for treatment of patent ductus arteriosus or in marketed use. The rates are calculated from a database that contains experience of 849 indomethacin-treated neonates reported in the medical literature, regardless of the route of administration. One year follow-up is available on 175 neonates and shows no long-term sequelae that could be attributed to indomethacin. In controlled clinical studies, only electrolyte imbalance and renal dysfunction (of the reactions listed below) occurred statistically significantly more frequently after Indomethacin for Injection than after placebo. Reactions marked with a single asterisk (*) occurred in 3 to 9 percent of indomethacin-treated neonates; those marked with a double asterisk (**) occurred in 3 to 9 percent of both indomethacin- and placebo-treated neonates. Unmarked reactions occurred in less than 3 percent of neonates.

The following adverse reactions have also been reported in neonates treated with indomethacin, however, a causal relationship to therapy with Indomethacin for Injection has not been established:

As renal function may be reduced by Indomethacin for Injection, consider reducing the dosage of those medications that rely on adequate renal function for their elimination.

Because the half-life of digoxin (given frequently to pre-term infants with patent ductus arteriosus and associated cardiac failure) may be prolonged when given concomitantly with indomethacin, observe neonates receiving concomitant digoxin closely; frequent ECGs and serum digoxin levels may be required to prevent or detect digoxin toxicity early.

In one study of premature infants treated with Indomethacin for Injection and also receiving either gentamicin or amikacin, both peak and trough levels of these aminoglycosides were significantly elevated.

7.5 Drugs that Act on the Renin-Angiotensin System

In some patients with compromised renal function, the co-administration of an NSAID and an ACE inhibitor or angiotensin II antagonist may result in further deterioration of renal function, including possible acute renal failure, which is usually reversible.

Indomethacin is designated chemically as 1-(4-chlorobenzoyl)-5-methoxy-2-methyl-1H-indole-3-acetic acid. The structural formula is: 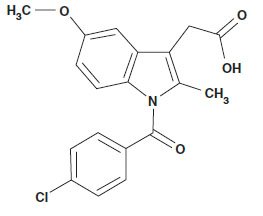 Although the exact mechanism of action through which indomethacin causes closure of a patent ductus arteriosus is not known, it is believed to be through inhibition of prostaglandin synthesis.

Indomethacin has been shown to be a potent inhibitor of prostaglandin synthesis, both in vitro and in vivo. In human newborns with certain congenital heart malformations, PGE 1 dilates the ductus arteriosus. In fetal and newborn lambs, E type prostaglandins have also been shown to maintain the patency of the ductus, and as in human newborns, indomethacin causes its constriction.

Studies in healthy young animals and in premature infants with patent ductus arteriosus indicated that, after the first dose of intravenous indomethacin, there was a transient reduction in cerebral blood flow velocity and cerebral blood flow. Similar decreases in mesenteric blood flow and velocity have been observed. The clinical significance of these effects has not been established.

In adults, about 99 percent of indomethacin is bound to protein in plasma over the expected range of therapeutic plasma concentrations. The percent bound in neonates has not been studied. In controlled trials in premature infants, however, no evidence of bilirubin displacement has been observed as evidenced by increased incidence of bilirubin encephalopathy (kernicterus).

Pregnant rats, given 2 mg/kg/day and 4 mg/kg/day during the last trimester of gestation, delivered offspring whose pulmonary blood vessels were both reduced in number and excessively muscularized. These findings are similar to those observed in the syndrome of persistent pulmonary hypertension of the neonate.

The container closure is not made with natural rubber latex.

Store at 25°C (77°F) with excursions permitted to 15° to 30°C (59° to 86°F). Protect from light. Store container in carton until contents have been used. PREMIERProRx® is a registered trademark of Premier Healthcare Alliance, L.P., used under license.

FOR THE PREPARATION OF INTRAVENOUS SOLUTIONS

Indomethacin for Injection
1 mg per vial

For Intravenous Use Only
FOR THE PREPARATION OF INTRAVENOUS SOLUTIONS 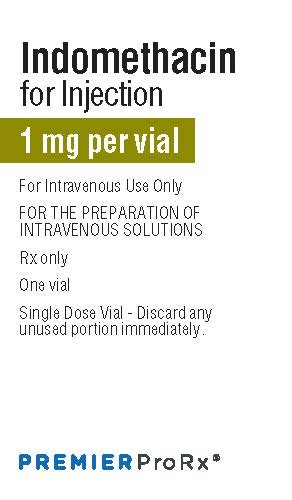 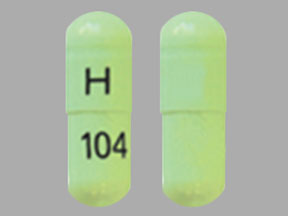