FOR TOPICAL USE ONLY
NOT FOR OPHTHALMIC, ORAL, OR INTRAVAGINAL USE 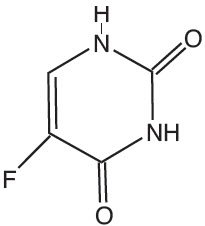 There is evidence that the metabolism of fluorouracil in the anabolic pathway blocks the methylation reaction of deoxyuridylic acid to thymidylic acid. In this manner fluorouracil interferes with the synthesis of deoxyribonucleic acid (DNA) and to a lesser extent inhibits the formation of ribonucleic acid (RNA). Since DNA and RNA are essential for cell division and growth, the effect of fluorouracil may be to create a thymine deficiency which provokes unbalanced growth and death of the cell. The effects of DNA and RNA deprivation are most marked on those cells which grow more rapidly and take up fluorouracil at a more rapid rate. The catabolic metabolism of fluorouracil results in degradation products (e.g., CO2, urea, α-fluoro-β-alanine) which are inactive.

Systemic absorption studies of topically applied fluorouracil have been performed on patients with actinic keratoses using tracer amounts of 14C-labeled fluorouracil added to a 5% preparation. All patients had been receiving nonlabeled fluorouracil until the peak of the inflammatory reaction occurred (2 to 3 weeks), ensuring that the time of maximum absorption was used for measurement. One gram of labeled preparation was applied to the entire face and neck and left in place for 12 hours. Urine samples were collected. At the end of 3 days, the total recovery ranged between 0.48% and 0.94% with an average of 0.76%, indicating that approximately 5.98% of the topical dose was absorbed systemically. If applied twice daily, this would indicate systemic absorption of topical fluorouracil to be in the range of 5 to 6 mg per daily dose of 100 mg. In an additional study, negligible amounts of labeled material were found in plasma, urine and expired CO2 after 3 days of treatment with topically applied 14C-labeled fluorouracil.

Indications and Usage for Fluorouracil Cream

Fluorouracil is recommended for the topical treatment of multiple actinic or solar keratoses. In the 5% strength, it is also useful in the treatment of superficial basal cell carcinomas when conventional methods are impractical, such as with multiple lesions or difficult treatment sites. Safety and efficacy in other indications have not been established.

The diagnosis should be established prior to treatment, since this method has not been proven effective in other types of basal cell carcinomas. With isolated, easily accessible basal cell carcinomas, surgery is preferred since success with such lesions is almost 100%. The success rate with Fluorouracil Cream and solution is approximately 93%, based on 113 lesions in 54 patients. Twenty-five lesions treated with the solution produced 1 failure and 88 lesions treated with the cream produced 7 failures.

Fluorouracil may cause fetal harm when administered to a pregnant woman.

Animal reproduction studies have not been conducted with fluorouracil. Fluorouracil administered parenterally has been shown to be teratogenic in mice, rats, and hamsters when given at doses equivalent to the usual human intravenous dose; however, the amount of fluorouracil absorbed systemically after topical administration to actinic keratoses is minimal (see CLINICAL PHARMACOLOGY). Fluorouracil exhibited maximum teratogenicity when given to mice as single intraperitoneal injections of 10 to 40 mg/kg on Day 10 or 12 of gestation. Similarly, intraperitoneal doses of 12 to 37 mg/kg given to rats between Days 9 and 12 of gestation and intramuscular doses of 3 to 9 mg/kg given to hamsters between Days 8 and 11 of gestation were teratogenic and/or embryotoxic (i.e., resulted in increased resorptions or embryolethality). In monkeys, divided doses of 40 mg/kg given between Days 20 and 24 of gestation were not teratogenic. Doses higher than 40 mg/kg resulted in abortion.

Fluorouracil is contraindicated in women who are or may become pregnant during therapy. If this drug is used during pregnancy, or if the patient becomes pregnant while using this drug, the patient should be apprised of the potential hazard to the fetus.

Fluorouracil is also contraindicated in patients with known hypersensitivity to any of its components.

Application to mucous membranes should be avoided due to the possibility of local inflammation and ulceration. Additionally, cases of miscarriage and a birth defect (ventricular septal defect) have been reported when fluorouracil was applied to mucous membrane areas during pregnancy.

Occlusion of the skin with resultant hydration has been shown to increase percutaneous penetration of several topical preparations. If any occlusive dressing is used in treatment of basal cell carcinoma, there may be an increase in the severity of inflammatory reactions in the adjacent normal skin. A porous gauze dressing may be applied for cosmetic reasons without increase in reaction.

Exposure to ultraviolet rays should be minimized during and immediately following treatment with fluorouracil because the intensity of the reaction may be increased.

Rarely, life-threatening toxicities such as stomatitis, diarrhea, neutropenia, and neurotoxicity have been reported with intravenous administration of fluorouracil in patients with DPD enzyme deficiency. One case of life-threatening systemic toxicity has been reported with the topical use of fluorouracil in a patient with DPD enzyme deficiency. Symptoms included severe abdominal pain, bloody diarrhea, vomiting, fever, and chills. Physical examination revealed stomatitis, erythematous skin rash, neutropenia, thrombocytopenia, inflammation of the esophagus, stomach, and small bowel. Although this case was observed with 5% Fluorouracil Cream, it is unknown whether patients with profound DPD enzyme deficiency would develop systemic toxicity with lower concentrations of topically applied fluorouracil.

There is a possibility of increased absorption through ulcerated or inflamed skin.

Patients should be forewarned that the reaction in the treated areas may be unsightly during therapy and, usually, for several weeks following cessation of therapy. Patients should be instructed to avoid exposure to ultraviolet rays during and immediately following treatment with fluorouracil because the intensity of the reaction may be increased. If fluorouracil is applied with the fingers, the hands should be washed immediately afterward. Fluorouracil should not be applied on the eyelids or directly into the eyes, nose or mouth because irritation may occur.

Solar keratoses which do not respond should be biopsied to confirm the diagnosis. Follow-up biopsies should be performed as indicated in the management of superficial basal cell carcinoma.

Adequate long-term studies in animals to evaluate carcinogenic potential have not been conducted with fluorouracil. Studies with the active ingredient of fluorouracil, 5-fluorouracil, have shown positive effects in in vitro tests for mutagenicity and on impairment of fertility.

While no evidence for mutagenic activity was observed in the Ames test (three studies), fluorouracil has been shown to be mutagenic in the survival count rec-assay with Bacillus subtilis and in the Drosophila wing-hair spot test. Fluorouracil produced petite mutations in Saccharomyces cerevisiae and was positive in the micronucleus test (bone marrow cells of male mice).

Fluorouracil was clastogenic in vitro (i.e., chromatid gaps, breaks and exchanges) in Chinese hamster fibroblasts at concentrations of 1.0 and 2.0 mcg/mL and has been shown to increase sister chromatid exchange in vitro in human lymphocytes. In addition, 5-fluorouracil has been reported to produce an increase in numerical and structural chromosome aberrations in peripheral lymphocytes of patients treated with this product.

Doses of 125 to 250 mg/kg, administered intraperitoneally, have been shown to induce chromosomal aberrations and changes in chromosome organization of spermatogonia in rats. Spermatogonial differentiation was also inhibited by fluorouracil, resulting in transient infertility. However, in studies with a strain of mouse which is sensitive to the induction of sperm head abnormalities after exposure to a range of chemical mutagens and carcinogens, fluorouracil was inactive at oral doses of 5 to 80 mg/kg/day. In female rats, fluorouracil administered intraperitoneally at doses of 25 and 50 mg/kg during the preovulatory phase of oogenesis significantly reduced the incidence of fertile matings, delayed the development of preimplantation and postimplantation embryos, increased the incidence of preimplantation lethality and induced chromosomal anomalies in these embryos. Single-dose intravenous and intraperitoneal injections of 5-fluorouracil have been reported to kill differentiated spermatogonia and spermatocytes (at 500 mg/kg) and to produce abnormalities in spermatids (at 50 mg/kg) in mice.

It is not known whether fluorouracil is excreted in human milk. Because there is some systemic absorption of fluorouracil after topical administration (see CLINICAL PHARMACOLOGY), because many drugs are excreted in human milk, and because of the potential for serious adverse reactions in nursing infants, a decision should be made whether to discontinue nursing or to discontinue use of the drug, taking into account the importance of the drug to the mother.

The most frequent adverse reactions to fluorouracil occur locally and are often related to an extension of the pharmacological activity of the drug. These include burning, crusting, allergic contact dermatitis, pruritus, scarring, rash, soreness and ulceration. Ulcerations, other local reactions, cases of miscarriage and a birth defect (ventricular septal defect) have been reported when fluorouracil was applied to mucous membrane areas. Leukocytosis is the most frequent hematological side effect.

Although a causal relationship is remote, other adverse reactions which have been reported infrequently are:

There have been no reports of overdosage with fluorouracil.

When fluorouracil is applied to a lesion, a response occurs with the following sequence: erythema, usually followed by vesiculation, desquamation, erosion and re-epithelialization.

Fluorouracil should be applied preferably with a nonmetal applicator or suitable glove. If fluorouracil is applied with the fingers, the hands should be washed immediately afterward.

Apply cream twice daily in an amount sufficient to cover the lesions. Medication should be continued until the inflammatory response reaches the erosion stage, at which time use of the drug should be terminated. The usual duration of therapy is from 2 to 4 weeks. Complete healing of the lesions may not be evident for 1 to 2 months following cessation of fluorouracil therapy.

Only the 5% strength is recommended. Apply cream twice daily in an amount sufficient to cover the lesions. Treatment should be continued for at least 3 to 6 weeks. Therapy may be required for as long as 10 to 12 weeks before the lesions are obliterated. As in any neoplastic condition, the patient should be followed for a reasonable period of time to determine if a cure has been obtained.

How is Fluorouracil Cream Supplied

FOR TOPICAL USE ONLY. NOT FOR OPHTHALMIC, ORAL, OR INTRAVAGINAL USE. 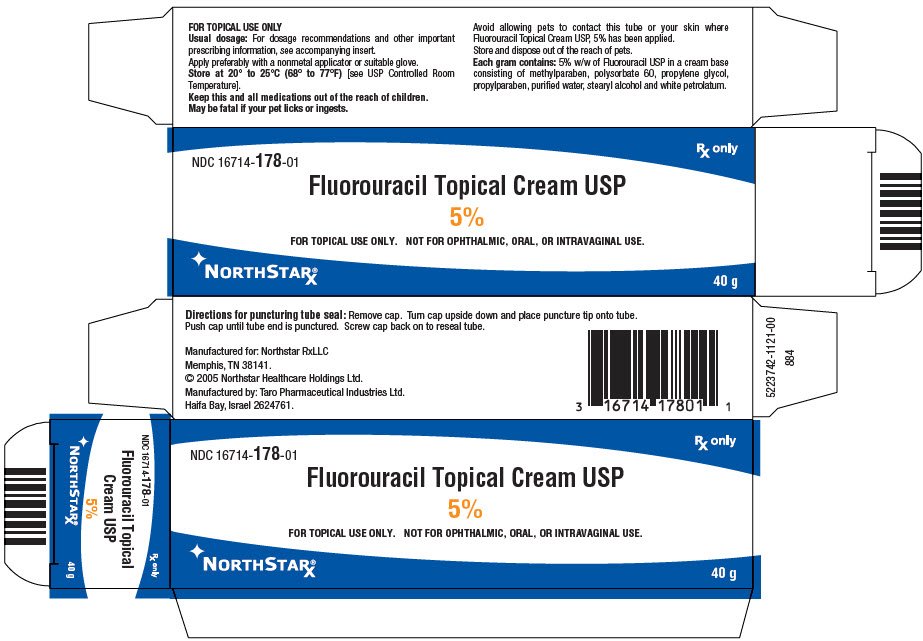