Indications and Usage for Tolak Cream

Tolak (fluorouracil) Cream is indicated for the topical treatment of actinic keratosis lesions of the face, ears, and/or scalp.

Prior to application of Tolak Cream, wash, rinse, and dry the treatment areas. Apply Tolak Cream once daily in an amount sufficient to cover the lesions of the face, ears, and/or scalp with a thin film, using the fingertips to gently massage the medication uniformly into the skin. Apply Tolak Cream for a period of 4 weeks as tolerated. Thoroughly wash hands following Tolak Cream application.

Tolak Cream is for topical use only. Do not apply to eyes, nose, mouth or mucous membranes. Not for ophthalmic, oral or intravaginal use.

Do not apply Tolak Cream directly into eyes, nose, mouth, or other mucous membranes because irritation, local inflammation and ulceration can occur.

Corneal and conjunctival disorders have occurred with topical fluorouracil use [see Adverse Reactions (6.2)]. Avoid application to the periocular area. To avoid transfer of the drug into the eyes and to the periocular area during and after application, patients should wash hands well after applying Tolak Cream. If accidental exposure occurs, the patient should flush eye(s) with large amounts of water and seek medical care as soon as possible.

Cases of miscarriage and birth defects (including cleft lip and cleft palate) have been reported when pregnant women were exposed to a topical or parenteral fluorouracil product. In addition, ventricular septal defect and cases of miscarriage occurred when pregnant women applied a topical fluorouracil product to mucous membranes (Tolak Cream is not indicated for use on the mucous membrane). Furthermore, fluorouracil interferes with the synthesis of deoxyribonucleic acid (DNA), inhibits the formation of ribonucleic acid (RNA), and provokes unbalanced growth and death of cells. Therefore, Tolak Cream is contraindicated in pregnancy.

Advise females of reproductive potential to use effective contraception during Tolak use and for one month after the last dose of Tolak Cream.

A large percentage of fluorouracil is catabolized by the DPD enzyme. DPD enzyme deficiency may result in increased availability of fluorouracil to the anabolic pathway, which may lead to increased interference with DNA and RNA synthesis and increased cytotoxic activity and potential toxicities [see Clinical Pharmacology (12.1)]. Therefore, Tolak Cream is contraindicated in patients with DPD deficiency.

The following serious adverse reactions are discussed in more detail in other sections of the labeling:

The data described below reflect exposure to Tolak Cream in 397 subjects with actinic keratosis in vehicle-controlled trials. The population ranged in age from 33 to 94 years, was 80% male, and almost all were Caucasian. Most subjects were treated with Tolak Cream once daily for 4 weeks. Throughout the 4-week treatment and the 4-week post-treatment periods, the trials specifically monitored for adverse reactions related to tolerability, including erythema, scaling/dryness, edema, crusting, erosions, stinging/burning, and pruritus.

The number and percentage of subjects with each of these monitored adverse reactions at one or more post-baseline visit(s) during the clinical trials are shown in Table 1.

In these clinical trials, the intensity of the adverse reactions in subjects using Tolak Cream generally increased over the 4-week treatment period, usually reaching maximal levels at 4 weeks of treatment and then diminishing to baseline levels within 4 weeks after cessation of treatment.

In Trials 1 and 2, 11% of Tolak Cream-treated and 3% of vehicle-treated subjects discontinued treatment because of adverse reactions. Of these subjects, the majority had adverse reactions at the application site. Eye swelling, leading to discontinuation, occurred in one subject with Tolak Cream use.

The following adverse reactions have been identified during post-approval use of topical fluorouracil. Because these reactions are reported voluntarily from a population of uncertain size, it is not always possible to reliably estimate their frequency or establish a causal relationship to drug exposure.

Cases of miscarriage and birth defects (including cleft lip and cleft palate) have been reported when pregnant women were exposed to a topical or parenteral fluorouracil product. In addition, ventricular septal defect and cases of miscarriage occurred when pregnant women applied a topical fluorouracil product to mucous membranes (Tolak Cream is not indicated for use on the mucous membrane).

Animal reproduction studies have not been conducted with Tolak Cream. Fluorouracil administered parenterally has been shown to be teratogenic in mice, rats, and hamsters when given at doses equivalent to the usual human intravenous dose. However, the amount of fluorouracil absorbed systemically after topical administration to actinic keratosis is minimal [see Clinical Pharmacology (12.3)]. Fluorouracil exhibited maximum teratogenicity when given to mice as single intraperitoneal injections of 10 to 40 mg/kg on day 10 or 12 of gestation. Similarly, intraperitoneal doses of 12 to 37 mg/kg given to rats between days 9 and 12 of gestation and intramuscular doses of 3 to 9 mg/kg given to hamsters between days 8 and 11 of gestation were teratogenic and/or embryotoxic (i.e., resulted in increased resorptions or embryolethality). In monkeys, divided doses of 40 mg/kg given between days 20 and 24 of gestation were not teratogenic. However, doses higher than 40 mg/kg resulted in spontaneous abortions. Based on the recommended human dose and instructions for use, it is not possible to calculate human dose equivalents for animal exposures in these studies.

Because many drugs are excreted in human milk and there is some systemic absorption of fluorouracil after topical administration, and because of the potential for serious adverse reactions in nursing infants, a decision should be made whether to discontinue nursing or to discontinue drug use, taking into account the importance of the drug to the mother.

Actinic keratosis is not usually observed in the pediatric population except in the case of rare genetic diseases. Tolak Cream is not intended for use in pediatric patients. Safety and effectiveness in children have not been established.

No dose adjustment is required for elderly patients [see Clinical Studies (14)]. The mean age of the 403 subjects treated with Tolak Cream in the clinical trials was 68 years. Of the Tolak Cream-treated subjects, 61% were 65 and over, while 28% were 75 and over.

No overall differences in safety or effectiveness were observed between these subjects and younger subjects, and other reported clinical experience has not identified differences in responses between the elderly and younger patients, but greater sensitivity of some older individuals cannot be ruled out.

Tolak (fluorouracil) Cream, 4% contains 40 mg of fluorouracil per gram of white cream for topical application. It is a nucleoside metabolic inhibitor. Chemically, fluorouracil is 5-fluoro-2,4 (1H,3H)-pyrimidinedione. The molecular formula of 5-fluorouracil is C4H3FN2O2, and its molecular weight is 130.1. Its structural formula is: 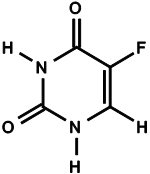 There is evidence that the metabolism of fluorouracil in the anabolic pathway blocks the methylation reaction of deoxyuridylic acid to thymidylic acid. In this manner, fluorouracil interferes with the synthesis of DNA and to a lesser extent inhibits the formation of RNA. Since DNA and RNA are essential for cell division and growth, the effect of fluorouracil may be to create a thymine deficiency that provokes unbalanced growth and death of the cell. The effects of DNA and RNA deprivation are most marked on those cells that grow more rapidly and take up fluorouracil at a more rapid rate.

The catabolism of 5-fluorouracil results in inactive degradation products (such as CO2, urea, α-fluoro-β-alanine).

Adequate long-term studies in animals to evaluate carcinogenic potential of fluorouracil have not been conducted. Studies with the active ingredient of Tolak, fluorouracil, have shown mutagenic effects in in vitro and in vivo tests and impairment of fertility in in vivo animal studies.

Although no evidence for mutagenic activity of fluorouracil was observed in 3 studies utilizing the Ames test, mutagenic activity was observed in the survival count rec-assay with Bacillus subtilis and in the Drosophila wing-hair spot test. Fluorouracil produced petite mutations in Saccharomyces cerevisiae and demonstrated positive results in the micronucleus test using bone marrow cells of male mice.

Fluorouracil demonstrated clastogenic activity in vitro in Chinese hamster fibroblasts at concentrations of 1.0 and 2.0 µg/mL and was associated with chromatid gaps, breaks, and exchanges. In human lymphocytes, fluorouracil increased sister chromatid exchange in vitro. Additionally, an increase in numerical and structural chromosome aberrations have been observed in peripheral lymphocytes of patients treated with 5-fluorouracil.

In rats, chromosomal abnormalities and changes in chromosome organization in spermatogonia have been observed after intraperitoneal administration of 125 to 250 mg/kg of fluorouracil. Spermatogonial differentiation was also inhibited and resulted in transient infertility. Fluorouracil was inactive, however, at oral doses of 5 to 80 mg/kg/day in studies with a strain of mouse which is sensitive to the induction of sperm head abnormalities after exposure to a range of chemical mutagens and carcinogens. In female rats, fluorouracil administered intraperitoneally at doses of 25 and 50 mg/kg during the preovulatory phase of oogenesis resulted in a significant reduction in the incidence of fertile matings, a delay in the development of preimplantation and postimplantation embryos, an increased incidence of preimplantation lethality, and an induction of chromosomal anomalies in these embryos. In mice, single intravenous or intraperitoneal injections of fluorouracil were toxic to differentiated spermatogonia and spermatocytes (at 500 mg/kg) and produced abnormalities in spermatids (at 50 mg/kg).

Examination of age (< 68 years versus ≥ 68 years) and gender subgroups did not identify differences in response to Tolak Cream among these subgroups. There were too few non-Caucasian subjects to adequately assess differences in effects among racial subgroups.

After completing Trials 1 and 2, subjects who achieved 100% clearing of actinic keratosis lesions with Tolak Cream treatment were followed for 12 months for lesion recurrence. Table 3 presents the long term outcomes of these 204 subjects.

HOW SUPPLIED / STORAGE AND HANDLING

Advise patients of the following:

Instruct patients to do the following:

Important: Tolak Cream is for use on skin only (topical). Do not get or apply Tolak Cream on your eyelids or in your eyes, nose, mouth, or in the vagina, because it may cause irritation and swelling in these areas.

What is Tolak Cream?

Tolak Cream is a prescription medicine used to treat skin lesions called actinic keratosis on the face, ears, or scalp.

It is not known if Tolak Cream is safe and effective for use on other areas of the body or to treat problems other than actinic keratosis.

It is not known if Tolak Cream is safe and effective in children.

Who should not use Tolak Cream?

Do not use Tolak Cream if:

What should I tell my doctor before using Tolak Cream?

Before using Tolak Cream, tell your doctor about all your medical conditions, including if you:

How should I use Tolak Cream?

What should I avoid while using Tolak Cream?

What are the possible side effects of Tolak Cream?

Tolak Cream can cause serious side effects:

Tell your doctor if you get any of these skin reactions and they are severe or do not go away.

These are not all the possible side effects of Tolak Cream. Call your doctor for medical advice about side effects. You may report side effects to FDA at 1-800-FDA-1088.

How should I store Tolak Cream?

Keep Tolak Cream and all medicines out of the reach of children.

General information about the safe and effective use of Tolak Cream

Medicines are sometimes prescribed for purposes other than those listed in a Patient Information leaflet. Do not use Tolak Cream for a condition for which it was not prescribed. Do not give Tolak Cream to other people, even if they have the same symptoms that you have. It may harm them.

You can ask your pharmacist or doctor for information about Tolak Cream that is written for health professionals.

What are the ingredients in Tolak Cream?

This Patient Information has been approved by the U.S. Food and Drug Administration.
Issued: August 2022

For Topical Use Only
Not for Ophthalmic, Oral or Intravaginal Use 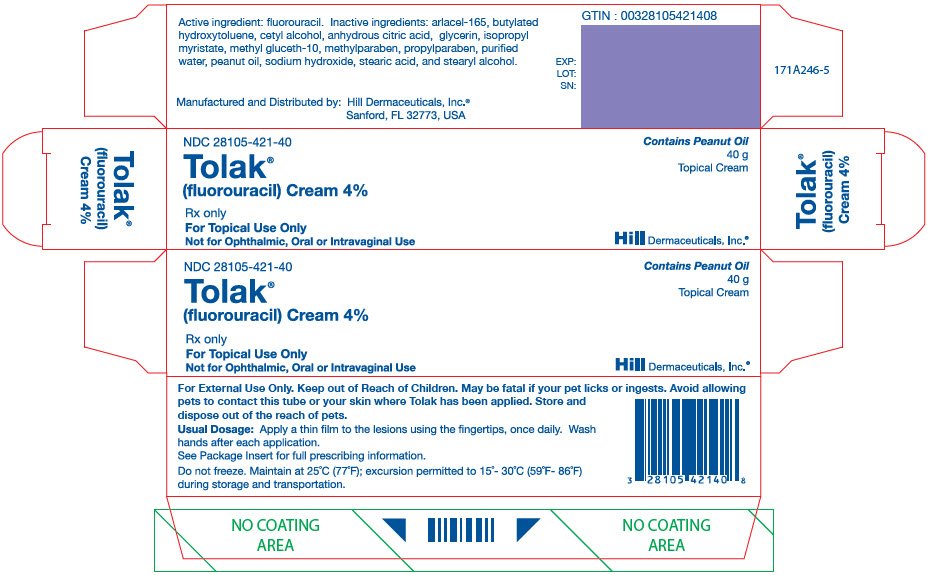