Indications and Usage for Fensolvi

Fensolvi is indicated for the treatment of pediatric patients 2 years of age and older with central precocious puberty (CPP).

Fensolvi must be administered by a healthcare professional.

The dose of Fensolvi is 45 mg administered by subcutaneous injection once every six months.

Discontinue Fensolvi treatment at the appropriate age of onset of puberty.

Monitor response to Fensolvi with a GnRH agonist stimulation test, basal serum luteinizing hormone (LH) levels or serum concentration of sex steroid levels at 1 to 2 months following initiation of therapy and as needed to confirm adequate suppression of pituitary gonadotropins, sex steroids, and progression of secondary sexual characteristics. Measure height (for calculation of growth velocity) every 3 to 6 months and monitor bone age periodically.

Noncompliance with drug regimen or inadequate dosing may lead to gonadotropins and/or sex steroids increasing above prepubertal levels resulting in inadequate control of the pubertal process. If the dose of Fensolvi is not adequate, switching to an alternative GnRH agonist for the treatment of CPP with the ability for dose adjustment may be necessary.

Fensolvi is packaged in a carton containing two trays and this package insert:

Table 1: Contents of the Two Trays in the Fensolvi Carton

Note: Should the needle hub appear to be damaged, or leak, do not use the product. If the needle hub is damaged or leakage is observed, use a new Fensolvi carton.

For injectable suspension, 45 mg of leuprolide acetate is supplied in a kit containing:

During the early phase of therapy, gonadotropins and sex steroids rise above baseline because of the initial stimulatory effect of the drug [see Clinical Pharmacology (12.2)]. Therefore, an increase in clinical signs and symptoms of puberty including vaginal bleeding may be observed during the first weeks of therapy or after subsequent doses [see Adverse Reactions (6)]. Instruct patients and caregivers to notify the physician if these symptoms continue beyond the second month after Fensolvi administration.

Psychiatric events have been reported in patients taking GnRH agonists, including leuprolide acetate. Postmarketing reports with this class of drugs include symptoms of emotional lability, such as crying, irritability, impatience, anger, and aggression. Monitor for development or worsening of psychiatric symptoms during treatment with Fensolvi [see Adverse Reactions (6.1, 6.2)].

Postmarketing reports of convulsions have been observed in patients receiving GnRH agonists, including leuprolide acetate. These included patients with a history of seizures, epilepsy, cerebrovascular disorders, central nervous system anomalies or tumors, and patients on concomitant medications that have been associated with convulsions such as bupropion and SSRIs. Convulsions have also been reported in patients in the absence of any of the conditions mentioned above [see Adverse Reactions (6.2)].

The following serious adverse reactions are described here and elsewhere in the label:

Fensolvi was evaluated in an uncontrolled, open-label, single-arm clinical trial in which 64 pediatric patients with CPP received at least one dose of Fensolvi. The age ranged from 4 to 9 years at start of treatment; 62 patients were female and 2 were male; 53% White; 23% Black; 8% American Indian or Alaska Native; 5% Asian; 2% Native Hawaiian or Other Pacific Islander. 56% of the subjects self-identified as Hispanic or Latino ethnicity. Adverse reactions that occurred in ≥ 5% of patients are shown in Table 2.

Table 2: Adverse Reactions Occurring in ≥ 5% of Patients Treated with Fensolvi in an Open-Label, Single-Arm Trial

The following adverse reactions have been identifed during postapproval use of leuprolide acetate or Fensolvi. Because these reactions are reported voluntarily from a population of uncertain size, it is not always possible to reliably estimate their frequency or establish a causal relationship to drug exposure.

Psychiatric: emotional lability, such as crying, irritability, impatience, anger and aggression. Depression, including rare reports of suicidal ideation and attempt. Many, but not all, of these patients had a history of psychiatric illness or other comorbidities with an increased risk of depression.

No pharmacokinetic drug-drug interaction studies have been conducted with Fensolvi.

When administered on day 6 of pregnancy at test dosages of 0.00024 mg/kg, 0.0024 mg/kg, and 0.024 mg/kg (1/3255 to 1/33 of the human dose) to rabbits, leuprolide acetate produced a dose-related increase in major fetal abnormalities. Similar studies in rats failed to demonstrate an increase in fetal malformations. There was increased fetal mortality and decreased fetal weights with the two higher doses of leuprolide acetate in rabbits and with the highest dose (0.024 mg/kg) in rats.

Exclude pregnancy in women of reproductive potential prior to initiating Fensolvi if clinically indicated [see Use in Specific Populations (8.1)].

Fensolvi may cause embryo-fetal harm when administered during pregnancy. Fensolvi is not a contraceptive. If contraception is indicated, advise females of reproductive potential to use a non-hormonal method of contraception during treatment with Fensolvi [see Use in Specific Populations (8.1)].

Based on its pharmacodynamic effects of decreasing secretion of gonadal steroids, fertility is expected to be decreased while on treatment with Fensolvi. Clinical and pharmacologic studies in adults (>18 years) with leuprolide acetate and similar analogs have shown reversibility of fertility suppression when the drug is discontinued after continuous administration for periods of up to 24 weeks [see Clinical Pharmacology (12.1)].

There is no evidence that pregnancy rates are affected following discontinuation of Fensolvi.

Animal studies (prepubertal and adult rats and monkeys) with leuprolide acetate and other GnRH analogs have shown functional recovery of fertility suppression.

No specific antidotes for Fensolvi are known. Contact Poison Control (1-800-222-1222) for latest recommendations.

Fensolvi for injectable suspension is a sterile polymeric matrix formulation of leuprolide acetate, a GnRH agonist, for subcutaneous use. It is designed to deliver leuprolide acetate at a controlled rate over a six-month therapeutic period.

Fensolvi is prefilled and supplied in two separate, sterile syringes whose contents are mixed immediately prior to administration. The two syringes are joined and the single dose product is mixed until it is homogenous. Fensolvi is administered subcutaneously, where it forms a solid drug delivery depot.

One syringe contains the ATRIGEL Delivery System and the other contains the leuprolide acetate. ATRIGEL is a polymeric (non-gelatin containing) delivery system consisting of a biodegradable poly(DL-lactide-co-glycolide) (PLG) polymer formulation dissolved in the biocompatible solvent, N-methyl-2-pyrrolidone (NMP).

Refer to Table 3 for the delivery system composition and reconstituted product formulation for Fensolvi product.

Leuprolide acetate, a GnRH agonist, acts as a potent inhibitor of gonadotropin secretion (LH and follicle stimulating hormone (FSH)) when given continuously in therapeutic doses. Following an initial stimulation of GnRH receptors, chronic administration of leuprolide acetate results in downregulation of GnRH receptors, reduction in release of LH, FSH and consequent suppression of ovarian and testicular production of estradiol and testosterone respectively. This inhibitory effect is reversible upon discontinuation of drug therapy.

After an initial subcutaneous injection of Fensolvi 45 mg in pediatric patients 4 to 9 years of age with CPP, leuprolide levels peaked 4 hours postdose with a mean Cmax of 212.3 ng/mL. Absorption occurred in two phases, a burst phase followed by a plateau phase. The mean plateau serum leuprolide level from 4 to 48 weeks was approximately 0.37 ng/mL with a range of 0.18 to 0.63 ng/mL. There was no accumulation of leuprolide after the second dose.

In vitro binding of leuprolide to human plasma proteins ranged from 43% to 49%.

In healthy male volunteers, a 1 mg bolus of leuprolide administered intravenously revealed that the mean systemic clearance was 8.34 L/h, with a terminal elimination half-life of approximately 3 hours based on a two-compartment model.

Drug excretion studies were not conducted with Fensolvi.

The pharmacokinetics of Fensolvi in hepatically and renally impaired pediatric patients have not been determined.

Two-year carcinogenicity studies were conducted with leuprolide acetate in rats and mice. In rats, a dose-related increase of benign pituitary hyperplasia and benign pituitary adenomas was noted at 24 months when the drug was administered subcutaneously at high daily doses (0.6 to 4 mg/kg). There was a significant but not dose-related increase of pancreatic islet-cell adenomas in females and of testicular interstitial cell adenomas in males (highest incidence in the low dose group). In mice, no leuprolide acetate-induced tumors or pituitary abnormalities were observed at a dose as high as 60 mg/kg for two years. Patients have been treated with leuprolide acetate for up to three years with doses as high as 10 mg/day and for two years with doses as high as 20 mg/day without demonstrable pituitary abnormalities. No carcinogenicity studies have been conducted with Fensolvi.

Mutagenicity studies have been performed with leuprolide acetate using bacterial and mammalian systems. These studies provided no evidence of a mutagenic potential.

The efficacy of Fensolvi was evaluated in an uncontrolled, open-label, single arm clinical trial in which 64 pediatric patients (62 females and 2 males, naïve to previous GnRH agonist treatment) with CPP received at least one dose of Fensolvi at a dosing interval of 24 weeks and were observed for 12 months. The mean age was 7.5 years (range 4 to 9 years) at the start of treatment. In pediatric patients with CPP, Fensolvi reduced stimulated and basal gonadotropins to prepubertal levels. Suppression of peak stimulated LH concentrations to <4 IU/L was achieved in 87% of pediatric patients by month 6 and in 86% of patients by month 12. Suppression of estradiol or testosterone concentration to prepubertal levels at the 6-month assessment was achieved in 97% and 100% of patients, respectively. Suppression of estradiol or testosterone was maintained at the 12-month assessment with 98% (55/56 females) and 50% (1/2 males) maintaining suppression. Fensolvi arrested or reversed progression of clinical signs of puberty with reductions in growth velocity and bone age. Mean growth velocity decreased from 8.9 ± 13.1 cm/yr at 1 month to 6.9 ± 3.1 cm/yr at 6 months and to 6.4 ± 1.9 cm/yr at 12 months.

Eight female patients out of 62 did not meet the primary efficacy criteria for LH <4 IU/L at 6 months. In four of the eight patients, the LH level at 6 months was between 4.2 and 4.8 IU/L. The remaining four patients had LH levels >5 IU/L. However, post stimulation estradiol was suppressed to prepubertal levels (<20 pg/mL) in seven of the eight patients at month 6 and was maintained through month 12.

Once outside the refrigerator, this product may be stored in its original packaging at room temperature 15 – 30 °C (59 – 86 °F) for up to eight weeks prior to reconstitution and administration.

Inform patients and caregivers that during the early phase of therapy with Fensolvi, gonadotropins and sex steroids rise above baseline because of the initial stimulatory effect of the drug. Therefore, an increase in clinical signs and symptoms of puberty may be observed. Instruct patients and caregivers to notify the physician if these symptoms continue beyond the second month after Fensolvi administration [see Warnings and Precautions (5.1)].

Inform patients and caregivers that psychiatric events have been reported in patients taking GnRH agonists, including leuprolide acetate. Events include emotional lability, such as crying, irritability, impatience, anger, and aggression. Instruct patients and caregivers to monitor for development or worsening of psychiatric symptoms including depression during treatment with Fensolvi [see Warnings and Precautions (5.2)].

Inform patients and caregivers that reports of convulsions have been observed in patients receiving GnRH agonists, including leuprolide acetate. Patients with a history of seizures, epilepsy, cerebrovascular disorders, central nervous system anomalies or tumors, and patients on concomitant medications that have been associated with convulsions may be at increased risk [see Warnings and Precautions (5.3)].

Fensolvi is contraindicated in pregnancy. If the patient becomes pregnant while taking the drug, the patient should be informed of the potential risk to the fetus [see Use in Specific Populations (8.1)].

Compliance with the Dosing Schedule

Inform caregivers about the importance of adherence to the Fensolvi dosing schedule of one injection every 24 weeks [see Dosage and Administration (2.1, 2.2)].

This Medication Guide has been approved by the U.S. Food and Drug Administration Issued:04/2022 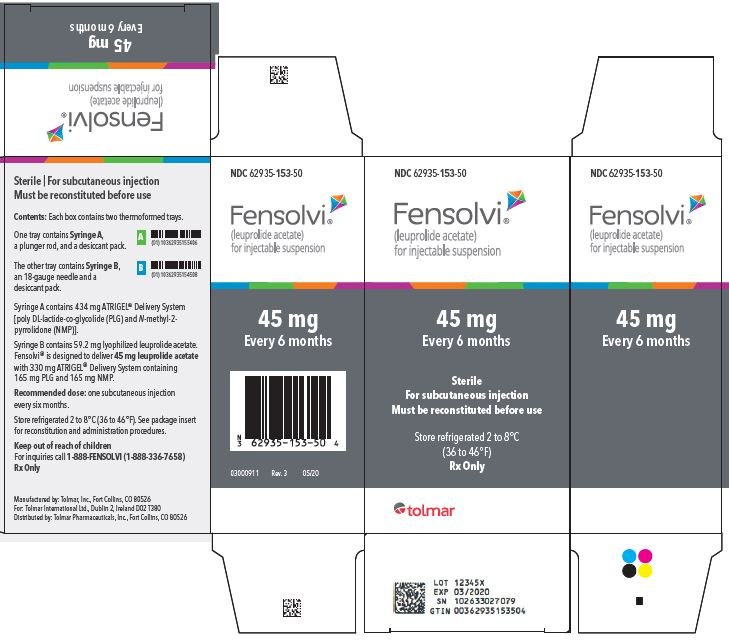