Indications and Usage for Ditropan XL

Ditropan XL ® (oxybutynin chloride) is a muscarinic antagonist indicated for the treatment of overactive bladder with symptoms of urge urinary incontinence, urgency, and frequency.

Ditropan XL ® is also indicated for the treatment of pediatric patients aged 6 years and older with symptoms of detrusor overactivity associated with a neurological condition (e.g., spina bifida).

Ditropan XL ® must be swallowed whole with the aid of liquids, and must not be chewed, divided, or crushed.

Ditropan XL ® may be administered with or without food.

The recommended starting dose of Ditropan XL ® is 5 or 10 mg once daily at approximately the same time each day. Dosage may be adjusted in 5-mg increments to achieve a balance of efficacy and tolerability (up to a maximum of 30 mg/day). In general, dosage adjustment may proceed at approximately weekly intervals.

The recommended starting dose of Ditropan XL ® is 5 mg once daily at approximately the same time each day. Dosage may be adjusted in 5-mg increments to achieve a balance of efficacy and tolerability (up to a maximum of 20 mg/day).

Ditropan XL ® extended-release tablets are available as 5 and 10 mg tablets for oral use:

5 mg: Pale yellow, round, tablet with "5 XL" printed on one side with black ink.

Ditropan XL ® is also contraindicated in patients who have demonstrated hypersensitivity to the drug substance or other components of the product. There have been reports of hypersensitivity reactions, including anaphylaxis and angioedema.

Angioedema of the face, lips, tongue and/or larynx has been reported with oxybutynin. In some cases, angioedema occurred after the first dose. Angioedema associated with upper airway swelling may be life-threatening. If involvement of the tongue, hypopharynx, or larynx occurs, oxybutynin should be promptly discontinued and appropriate therapy and/or measures necessary to ensure a patent airway should be promptly provided.

Ditropan XL ® should be used with caution in patients with preexisting dementia treated with cholinesterase inhibitors due to the risk of aggravation of symptoms.

Ditropan XL ® should be used with caution in patients with Parkinson's disease due to the risk of aggravation of symptoms.

Worsening of Symptoms of Myasthenia Gravis

Ditropan XL ® should be used with caution in patients with myasthenia gravis due to the risk of aggravation of symptoms.

Ditropan XL ® should be used with caution in patients with autonomic neuropathy due to the risk of aggravation of symptoms of decreased gastrointestinal motility.

Ditropan XL ® should be administered with caution to patients with clinically significant bladder outflow obstruction because of the risk of urinary retention [see Contraindications (4)] .

Ditropan XL ® should be administered with caution to patients with gastrointestinal obstructive disorders because of the risk of gastric retention [see Contraindications (4)] .

Ditropan XL ®, like other anticholinergic drugs, may decrease gastrointestinal motility and should be used with caution in patients with conditions such as ulcerative colitis and intestinal atony.

Ditropan XL ® should be used with caution in patients who have gastroesophageal reflux and/or who are concurrently taking drugs (such as bisphosphonates) that can cause or exacerbate esophagitis.

As with any other nondeformable material, caution should be used when administering Ditropan XL ® to patients with preexisting severe gastrointestinal narrowing (pathologic or iatrogenic). There have been rare reports of obstructive symptoms in patients with known strictures in association with the ingestion of other drugs in nondeformable controlled-release formulations.

The safety and efficacy of Ditropan XL ® (5 to 30 mg/day) was evaluated in 774 adult subjects who participated in five double-blind, controlled clinical trials. In four of the five studies, Ditropan IR (5 to 20 mg/day in 199 subjects) was an active comparator. Adverse reactions reported by ≥ 1% of subjects are shown in Table 1.

The following additional adverse reactions have been reported from worldwide postmarketing experience with Ditropan XL ®. Because postmarketing reactions are reported voluntarily from a population of uncertain size, it is not always possible to reliably estimate their frequency or establish a causal relationship to drug exposure.

Additional adverse events reported with some other oxybutynin chloride formulations include: cycloplegia, mydriasis, and suppression of lactation. In one reported case, concomitant use of oxybutynin with carbamazepine and dantrolene was associated with adverse events of vomiting, drowsiness, confusion, unsteadiness, slurred speech and nystagmus, suggestive of carbamazepine toxicity.

Mean oxybutynin plasma concentrations were approximately 2 fold higher when Ditropan XL ® was administered with ketoconazole, a potent CYP3A4 inhibitor. Other inhibitors of the cytochrome P450 3A4 enzyme system, such as antimycotic agents (e.g., itraconazole and miconazole) or macrolide antibiotics (e.g., erythromycin and clarithromycin), may alter oxybutynin mean pharmacokinetic parameters (i.e., C max and AUC). The clinical relevance of such potential interactions is not known. Caution should be used when such drugs are co-administered.

There are no adequate data on Ditropan XL ® use in pregnant women to evaluate for a drug-associated risk of major birth defects, miscarriage or adverse maternal or fetal outcomes.

Urodynamic results were consistent with clinical results. Administration of Ditropan XL ® resulted in an increase from baseline in mean maximum cystometric capacity from 185 mL to 254 mL, a decrease from baseline in mean detrusor pressure at maximum cystometric capacity from 44 cm H 2O to 33 cm H 2O, and a reduction in the percentage of patients demonstrating uninhibited detrusor contractions (of at least 15 cm H 2O) from 60% to 28%.

The pharmacokinetics of Ditropan XL ® in these patients were consistent with those reported for adults [see Clinical Pharmacology (12.3)] .

Ditropan XL ® is not recommended in pediatric patients who cannot swallow the tablet whole without chewing, dividing, or crushing, or in children under the age of 6.

The rate and severity of anticholinergic effects reported by patients less than 65 years old and those 65 years and older were similar. The pharmacokinetics of Ditropan XL ® were similar in all patients studied (up to 78 years of age).

There were no studies conducted with Ditropan XL ® in patients with renal impairment.

There were no studies conducted with Ditropan XL ® in patients with hepatic impairment.

The continuous release of oxybutynin from Ditropan XL ® should be considered in the treatment of overdosage. Patients should be monitored for at least 24 hours. Treatment should be symptomatic and supportive. A cathartic may be administered.

Ingestion of 100 mg oxybutynin chloride in association with alcohol has been reported in a 13-year-old boy who experienced memory loss, and a 34-year-old woman who developed stupor, followed by disorientation and agitation on awakening, dilated pupils, dry skin, cardiac arrhythmia, and retention of urine. Both patients fully recovered with symptomatic treatment.

Oxybutynin chloride is a white crystalline solid with a molecular weight of 393.9. It is readily soluble in water and acids, but relatively insoluble in alkalis.

Ditropan XL ® uses osmotic pressure to deliver oxybutynin chloride at a controlled rate over approximately 24 hours. The system, which resembles a conventional tablet in appearance, comprises an osmotically active bilayer core surrounded by a semipermeable membrane. The bilayer core is composed of a drug layer containing the drug and excipients, and a push layer containing osmotically active components. There is a precision-laser drilled orifice in the semipermeable membrane on the drug-layer side of the tablet. In an aqueous environment, such as the gastrointestinal tract, water permeates through the membrane into the tablet core, causing the drug to go into suspension and the push layer to expand. This expansion pushes the suspended drug out through the orifice. The semipermeable membrane controls the rate at which water permeates into the tablet core, which in turn controls the rate of drug delivery. The controlled rate of drug delivery into the gastrointestinal lumen is thus independent of pH or gastrointestinal motility. The function of Ditropan XL ® depends on the existence of an osmotic gradient between the contents of the bilayer core and the fluid in the gastrointestinal tract. Since the osmotic gradient remains constant, drug delivery remains essentially constant. The biologically inert components of the tablet remain intact during gastrointestinal transit and are eliminated in the feces as an insoluble shell.

Antimuscarinic activity resides predominantly in the R-isomer. A metabolite, desethyloxybutynin, has pharmacological activity similar to that of oxybutynin in in vitro studies.

In patients with conditions characterized by involuntary bladder contractions, cystometric studies have demonstrated that oxybutynin increases bladder (vesical) capacity, diminishes the frequency of uninhibited contractions of the detrusor muscle, and delays the initial desire to void. 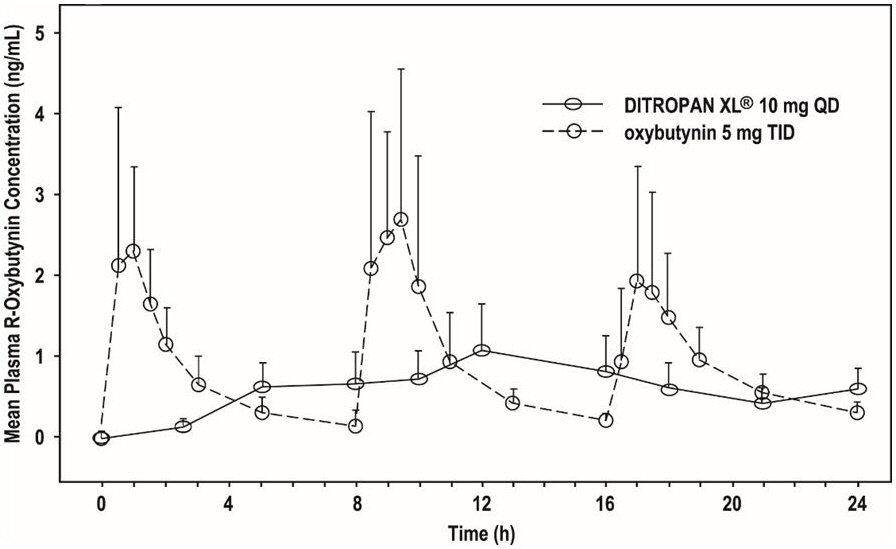 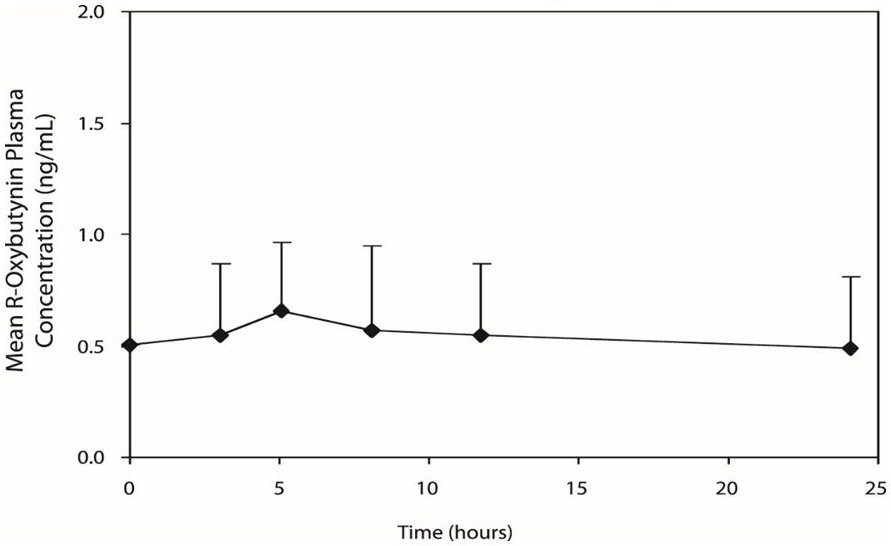 The rate and extent of absorption and metabolism of oxybutynin are similar under fed and fasted conditions.

Oxybutynin is metabolized primarily by the cytochrome P450 enzyme systems, particularly CYP3A4 found mostly in the liver and gut wall. Its metabolic products include phenylcyclohexylglycolic acid, which is pharmacologically inactive, and desethyloxybutynin, which is pharmacologically active. Following Ditropan XL ® administration, plasma concentrations of R- and S-desethyloxybutynin are 73% and 92%, respectively, of concentrations observed with oxybutynin.

Pharmacokinetic parameters of oxybutynin and desethyloxybutynin (C max and AUC) following administration of 5–20 mg of Ditropan XL ® are dose proportional.

There are no significant differences in the pharmacokinetics of oxybutynin in healthy male and female volunteers following administration of Ditropan XL ®.

Available data suggest that there are no significant differences in the pharmacokinetics of oxybutynin based on race in healthy volunteers following administration of Ditropan XL ®.

A 24-month study in rats at dosages of oxybutynin chloride of 20, 80, and 160 mg/kg/day showed no evidence of carcinogenicity. These doses are approximately 6, 25, and 50 times the maximum human exposure, based on a human equivalent dose taking into account normalization of body surface area.

Ditropan XL ® was evaluated for the treatment of patients with overactive bladder with symptoms of urge urinary incontinence, urgency, and frequency in three controlled efficacy studies. The majority of patients were Caucasian (89.0%) and female (91.9%) with a mean age of 59 years (range, 18 to 98 years). Entry criteria required that patients have urge or mixed incontinence (with a predominance of urge) as evidenced by ≥ 6 urge incontinence episodes per week and ≥ 10 micturitions per day. Study 1 was a fixed-dose escalation design, whereas the other two studies used a dose-adjustment design in which each patient's final dose was adjusted to a balance between improvement of incontinence symptoms and tolerability of side effects. All three studies included patients known to be responsive to oxybutynin or other anticholinergic medications, and these patients were maintained on a final dose for up to 2 weeks.

The efficacy results for the three controlled trials are presented in the following Tables 4, 5, and 6 and Figures 3, 4, and 5.

* The difference between Ditropan XL ® and placebo was statistically significant.

** The difference between Ditropan XL ® and oxybutynin fulfilled the criteria for comparable efficacy.

Ditropan XL ® and OROS ® are registered trademarks of ALZA Corporation.

Each tablet contains 5 mg
oxybutynin chloride in a
controlled-release formulation.

Each tablet contains 10 mg
oxybutynin chloride in a
controlled-release formulation. 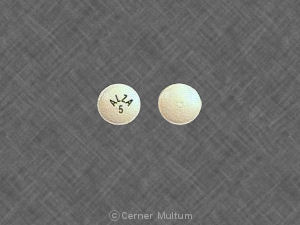