Medically reviewed by Drugs.com. Last updated on May 2, 2022.

The wallet has been designed to make oral contraceptive dosing as easy and as convenient as possible. The tablets are arranged in four rows of seven tablets each, with the days of the week appearing on the wallet above the first row of tablets.

Note: Each wallet has been preprinted with the days of the week, starting with Sunday, to facilitate a Sunday-Start regimen. Six different day label strips have been provided with the Detailed Patient & Brief Summary Patient Package Insert in order to accommodate a Day-1 Start regimen. If the patient is using the Day-1 Start regimen, she should place the self-adhesive day label strip that corresponds to her starting day over the preprinted days.

Important: The patient should be instructed to use an additional method of protection until after the first week of administration in the initial cycle when utilizing the Sunday-Start regimen.

The possibility of ovulation and conception prior to initiation of use should be considered.

To achieve maximum contraceptive effectiveness, Blisovi Fe 1/20 should be taken exactly as directed and at intervals not exceeding 24 hours.

Blisovi Fe 1/20 provides a continuous administration regimen consisting of 21 yellow tablets of norethindrone acetate and ethinyl estradiol, 1 mg/0.02 mg and 7 brown non-hormone containing tablets of ferrous fumarate. The ferrous fumarate tablets are present to facilitate ease of drug administration via a 28-day regimen and do not serve any therapeutic purpose. There is no need for the patient to count days between cycles because there are no "off-tablet days."

2 Day-1 Start Regimen: The first day of menstrual flow is Day 1. The patient places the self-adhesive day label strip that corresponds to her starting day over the preprinted days on the wallet. She starts taking one yellow tablet daily, beginning with the first yellow tablet in the top row. After the last yellow tablet (at the end of the third row) has been taken, the patient will then take the brown tablets for a week (7 days). For all subsequent cycles, the patient begins a new 28 tablet regimen on the eighth day after taking her last yellow tablet, again starting with the first tablet in the top row after placing the appropriate day label strip over the preprinted days on the wallet. Following this regimen of 21 yellow tablets and 7 brown tablets, the patient will start all subsequent cycles on the same day of the week as the first course.

Tablets should be taken regularly with a meal or at bedtime. It should be stressed that efficacy of medication depends on strict adherence to the dosage schedule.

Menstruation usually begins two or three days, but may begin as late as the fourth or fifth day, after the brown tablets have been started. In any event, the next course of tablets should be started without interruption. If spotting occurs while the patient is taking yellow tablets, continue medication without interruption.

If the patient forgets to take one or more yellow tablets, the following is suggested:

One tablet is missed

• take tablet as soon as remembered

• take next tablet at the regular time

• take two tablets the next day

• take one tablet daily until Sunday

• take one tablet daily until Sunday

If the patient forgets to take any of the seven brown tablets in week four, those brown tablets that were missed are discarded and one brown tablet is taken each day until the pack is empty. A back-up birth control method is not required during this time. A new pack of tablets should be started no later than the eighth day after the last yellow tablet was taken.

In the rare case of bleeding which resembles menstruation, the patient should be advised to discontinue medication and then begin taking tablets from a new wallet on the next Sunday or the first day (Day-1), depending on her regimen. Persistent bleeding which is not controlled by this method indicates the need for reexamination of the patient, at which time nonfunctional causes should be considered.

Use of Oral Contraceptives in the Event of a Missed Menstrual Period:

1. If the patient has not adhered to the prescribed dosage regimen, the possibility of pregnancy should be considered after the first missed period and oral contraceptives should be withheld until pregnancy has been ruled out.

2. If the patient has adhered to the prescribed regimen and misses two consecutive periods, pregnancy should be ruled out before continuing the contraceptive regimen.

After several months on treatment, bleeding may be reduced to a point of virtual absence. This reduced flow may occur as a result of medication, in which event it is not indicative of pregnancy. 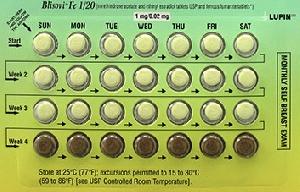