Fioricet with Codeine Side Effects

Note: This document contains side effect information about acetaminophen / butalbital / caffeine / codeine. Some of the dosage forms listed on this page may not apply to the brand name Fioricet with Codeine.

To ensure that the benefits of opioid analgesics outweigh the risks of addiction, abuse, and misuse, the Food and Drug Administration (FDA has required a REMS for these products. Under the requirements of the REMS, drug companies with approved opioid analgesic products must make REMS-compliant eduction programs available to healthcare providers. Healthcare providers are strongly encouraged to complete a REMS-compliant education program, counsel patients and/or their caregivers, with every prescription, on safe use, serious risks, storage, and disposal of these products, emphasize to patients and their caregivers the importance of reading the Medication Guide every time it is provided by their pharmacist, and consider other tools to improve patient, household, and community safety.

Risks from Concomitant Use with Benzodiazepines or Other CNS Depressants

Concomitant use of opioids with benzodiazepines or other CNS depressants, including alcohol, may result in profound sedation, respiratory depression, coma, and death. Reserve concomitant prescribing of butalbital, acetaminophen, caffeine, and codeine phosphate capsules and benzodiazepines or other CNS depressants for use in patients for whom alternative treatment options are inadequate. Limit dosages and durations to the minimum required. Follow patients for signs and symptoms of respiratory depression and sedation.

Prolonged use of butalbital, acetaminophen, caffeine, and codeine phosphate capsules during pregnancy can result in neonatal opioid withdrawal syndrome, which may be life-threatening if not recognized and treated, and requires management according to protocols developed by neonatology experts. If opioid use is required for a prolonged period in a pregnant woman, advise the patient of the risk of neonatal opioid withdrawal syndrome and ensure that appropriate treatment will be available.

Along with its needed effects, acetaminophen/butalbital/caffeine/codeine may cause some unwanted effects. Although not all of these side effects may occur, if they do occur they may need medical attention.

Check with your doctor immediately if any of the following side effects occur while taking acetaminophen/butalbital/caffeine/codeine:

Get emergency help immediately if any of the following symptoms of overdose occur while taking acetaminophen / butalbital / caffeine / codeine:

Some side effects of acetaminophen / butalbital / caffeine / codeine may occur that usually do not need medical attention. These side effects may go away during treatment as your body adjusts to the medicine. Also, your health care professional may be able to tell you about ways to prevent or reduce some of these side effects.

Acute liver failure has been reported with acetaminophen use; many cases have been associated with use at doses in excess of 4 g/day, and often involving more than 1 acetaminophen-containing product.[Ref]

Respiratory depression resulting in death has been reported in children who received codeine postoperatively following tonsillectomy and/or adenoidectomy. These children had evidence of being ultra-rapid metabolizers of codeine. Death has also been reported in nursing infants exposed to high levels of morphine in breast milk due to their breastfeeding mother being an ultra-rapid metabolizer of codeine.[Ref]

Several cases of dermatologic reactions including toxic epidermal necrolysis and erythema multiforme have been reported with butalbital/acetaminophen/caffeine.[Ref]

Other brands
Phrenilin with Caffeine and Codeine 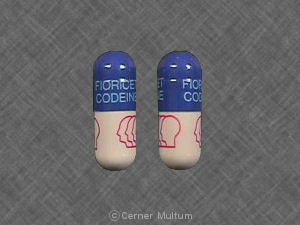