Zingo™ is indicated for use on intact skin to provide topical local analgesia prior to venipuncture or peripheral intravenous cannulation, in children 3–18 years of age.

Zingo™ is indicated for use on intact skin to provide topical local analgesia prior to venipuncture in adults.

Apply one Zingo™ (0.5 mg lidocaine hydrochloride monohydrate) to the site planned for venipuncture or intravenous cannulation, one to three minutes prior to needle insertion.

Perform the procedure within 10 minutes after Zingo™ administration.

Use Zingo™ only on intact skin.

Application of one additional Zingo™ at a new location is acceptable after a failed attempt at venous access. Multiple administrations of Zingo™ at the same location are not recommended.

When Zingo™ is used concomitantly with other products containing local anesthetic agents, the amount absorbed from all sources should be considered, as local anesthetics are thought to have at least additive toxicities.

Zingo™ is contraindicated in patients with a known history of sensitivity to local anesthetics of the amide type.

Do not use around the eyes.

Do not use Zingo™ on body orifices, mucous membranes, or on areas with a compromised skin barrier. Only use Zingo™ on skin locations where an adequate seal can be maintained.

Patients with severe hepatic disease or pseudocholinesterase deficiency, because of their inability to metabolize local anesthetics normally, are at a greater risk of developing toxic plasma concentrations of lidocaine.

Patients with bleeding tendencies or platelet disorders could have a higher risk of superficial dermal bleeding.

The safety of Zingo™ has been evaluated in 10 clinical trials, five in adults and five in pediatric patients.

The most common systemic adverse reactions were nausea (2%) and vomiting (1%).

Zingo™ was not formally evaluated for effects on reproduction. Significant systemic exposure to lidocaine is not expected under recommended conditions of use of Zingo™ as lidocaine levels were below the limit of detection in human studies. Lidocaine has been previously tested for reproductive toxicity in animal studies, however. The following ratios are based on the assumption that the applied dose is completely absorbed through the skin.

Pregnancy Category B. Lidocaine was not teratogenic in rats given subcutaneous doses up to 60 mg/kg [360 mg/m 2 or 1200-fold the single dermal administration (SDA) of 0.5 mg lidocaine in a 60 kg individual (0.3 mg/m 2)] or in rabbits up to 15 mg/kg (180 mg/m 2 or 600-fold the SDA). There are, however, no adequate and well-controlled studies in pregnant women. Because animal reproduction studies are not always predictive of human response, Zingo™ should be used during pregnancy only if clearly needed.

Lidocaine, containing 1:100,000 epinephrine, at a dose of 6 mg/kg (36 mg/m 2 or 120-fold the SDA) injected into the masseter muscle of the jaw or into the gum of the lower jaw of Long-Evans hooded pregnant rats on gestation day 11 led to developmental delays in neonatal behavior among offspring. Developmental delays were observed for negative geotaxis, static righting reflex, visual discrimination response, sensitivity and response to thermal and electrical shock stimuli, and water maze acquisition. The developmental delays of the neonatal animals were transient with responses becoming comparable to untreated animals later in life. The clinical relevance of the animal data is uncertain. No adequate and well–controlled studies have been conducted in pregnant women. Because animal studies are not always predictive of human response, Zingo™ should be used during pregnancy only if the potential benefit justifies risk to the fetus.

Lidocaine is not contraindicated in labor and delivery. In humans, the use of lidocaine for labor conduction analgesia has not been associated with an increased incidence of adverse fetal effects either during delivery or during the neonatal period. Should Zingo™ be used concomitantly with other products containing lidocaine, total doses contributed by all formulations must be considered.

Lidocaine is excreted into human milk; therefore, caution should be exercised when Zingo™ is administered to a nursing mother. Because no plasma concentrations of lidocaine are detected after topical administration of Zingo™ in recommended doses, the small amount of lidocaine that would be ingested orally by a suckling infant is unlikely to cause adverse effects.

Safety and effectiveness in pediatric patients below the age of 3 years have not been established.

Of the 693 patients evaluated in a Phase 3 randomized, double blind, sham-placebo-controlled trial in adults, 17% were of 65 and over. The safety and effectiveness of Zingo™ in geriatric patients were similar to that of Zingo™ in adults under 65 years of age

Zingo™ is not known to possess drug abuse or dependence potential.

In adults following a single administration of Zingo™ the plasma levels of lidocaine were below the limit of detection (5 ng/mL). Signs of central nervous system (CNS) toxicity may start at plasma concentrations of lidocaine as low as 1000 ng/mL, and the risk of seizures generally increases with increasing plasma levels. Very high levels of lidocaine can cause respiratory arrest, coma, decreases in cardiac output, total peripheral resistance, and mean arterial pressure, ventricular arrhythmias, and cardiac arrest. The toxicity of coadministered local anesthetics is thought to be at least additive. In the absence of massive topical overdose or oral ingestion, other etiologies for the clinical effects or overdosage from other sources of lidocaine or other local anesthetics should be considered. The management of overdosage includes close monitoring, supportive care, and symptomatic treatment. Dialysis is of negligible value in the treatment of acute overdosage of lidocaine.

The chemical name is 2-diethylamino-2',6'-acetoxylidide, monohydrochloride, monohydrate. The molecular formula is C 14H 22N 2O · HCl · H 2O with a molecular weight of 288.8 Da. Lidocaine hydrochloride monohydrate, a local anesthetic of the amide class, has the following structural formula:

Lidocaine hydrochloride monohydrate is freely soluble in water, soluble in alcohol and chloroform, insoluble in ether, and melts at around 74–79°C.

Zingo™ is a ready-to-use, sterile, single-use, disposable, needle-free delivery system. Zingo™ consists of the following components: a drug reservoir cassette filled with 0.5 mg lidocaine hydrochloride monohydrate as a powder with a nominal particle size of 40 µm, a pressurized helium gas cylinder, and a safety interlock. The safety interlock prevents inadvertent actuation of the device. Once Zingo™ is pressed against the skin, the interlock is released, allowing the button to be depressed to actuate the device. A sound similar to that of a popping balloon is emitted at the time Zingo™ is actuated.

Zingo™ delivers lidocaine hydrochloride monohydrate into the dermis. Lidocaine is an amide-type local anesthetic agent that blocks sodium ion channels required for the initiation and conduction of neuronal impulses, resulting in local anesthesia.

A single dose of Zingo™ in adults did not produce detectable plasma concentrations of lidocaine (limit of quantitation 5 ng/mL) in any subject tested (n = 38).

Application of Zingo™ to broken or inflamed skin, or multiple Zingo™ applications, could result in systemic plasma levels of lidocaine that could produce systemic toxicity.

When lidocaine is administered intravenously to healthy volunteers, the steady-state volume of distribution is approximately 0.8 to 1.3 L/kg. At much higher plasma concentrations (1 to 4 mcg/mL of free base) than those found following application of Zingo™, the plasma protein binding of lidocaine is concentration dependent. Lidocaine crosses the placental and blood brain barriers, presumably by passive diffusion. CNS toxicity may typically be observed around 5000 ng/mL of lidocaine; however a small number of patients reportedly may show signs of toxicity at approximately 1000 ng/mL.

Long-term studies in animals have not been performed to evaluate the carcinogenic potential of lidocaine.

No mutagenic potential of lidocaine was demonstrated in the in vitro Ames Bacterial Reverse Mutation Assay, the in vitro chromosome aberration assay using Chinese hamster ovary cells, and the in vivo mouse micronucleus assay.

Zingo™ was not formally evaluated for effects on fertility. Significant systemic exposure to lidocaine is not expected under recommended conditions of use of Zingo™, as lidocaine levels were below the limit of detection in human studies. Lidocaine has been previously tested in animal studies for effects on fertility, however. The following ratios are based on the assumption that the applied dose is completely absorbed through the skin.

Lidocaine did not affect fertility in female rats when given via continuous subcutaneous infusion via osmotic minipumps up to doses of 250 mg/kg/day [1500 mg/m 2 or 5000-fold higher than the SDA of 0.5 mg lidocaine in a 60 kg individual (0.3 mg/m 2)]. Although lidocaine treatment of male rats increased the copulatory interval and led to a dose-related decreased homogenization resistant sperm head count, daily sperm production, and spermatogenic efficiency, the treatment did not affect overall fertility in male rats when given subcutaneous doses up to 60 mg/kg (360 mg/m 2 or 1200-fold the SDA).

The efficacy of Zingo™ in adults was evaluated in a randomized, double-blind, parallel-arm, sham-placebo controlled trial in which adult patients who required a venipuncture or peripheral venous cannulation received either Zingo™ or a sham placebo device.

Patients were treated with Zingo™ or a placebo device at the antecubital fossa or back of the hand, between one and three minutes prior to venipuncture or peripheral venous cannulation. Measurements of pain were made immediately following the procedure. Efficacy was measured using a continuous 100 mm visual analogue scale ranging from 0 (“no pain”) to 100 (“worst possible pain”).

Many of the patients had chronic medical problems such as depression, hypertension, hypothyroidism, and hyperlipidemia and over one fourth of the population may have been at higher than average risk of dermal bleeding due to use of concomitant medications such as NSAIDs, aspirin, and corticosteroids.

The efficacy of Zingo™ in patients 3–18 years of age was evaluated in two randomized, double-blind, parallel-arm, sham-placebo controlled trials in which pediatric patients received either Zingo™ or a sham placebo device.

Two efficacy trials (Studies 1 and 2) were conducted during which patients were treated with Zingo™ or a placebo device at the back of hand or antecubital fossa, between one and three minutes prior to venipuncture or peripheral venous cannulation. Measurements of pain were made immediately following the venous procedure. Efficacy was measured using a modified version of the Wong-Baker FACES pain rating scale [a categorical 6-point scale containing 6 faces ranging from 0 (“no hurt”) to 5 (“hurts worst”)].

In both studies, treatment with active drug resulted in less pain, from venipuncture or peripheral IV cannulation, compared with placebo (See Table 2).

Patients should be made aware that a sound similar to that of a popping balloon is emitted at the time Zingo™ is actuated.

Patients should be informed that skin reactions including erythema, petechiae and edema may occur.

Zingo™ is a trademark of Powder

Under license by Marathon Pharmaceuticals, LLC.

This is a single use product. Do not use if pouch is torn or damaged or if the product has been dropped.

Do not use if the sterility of the purple outlet has been compromised. Store at 15-30ºC.

See package insert for full prescribing information. For use on intact skin. Zingo™ should be applied by a health care practitioner. 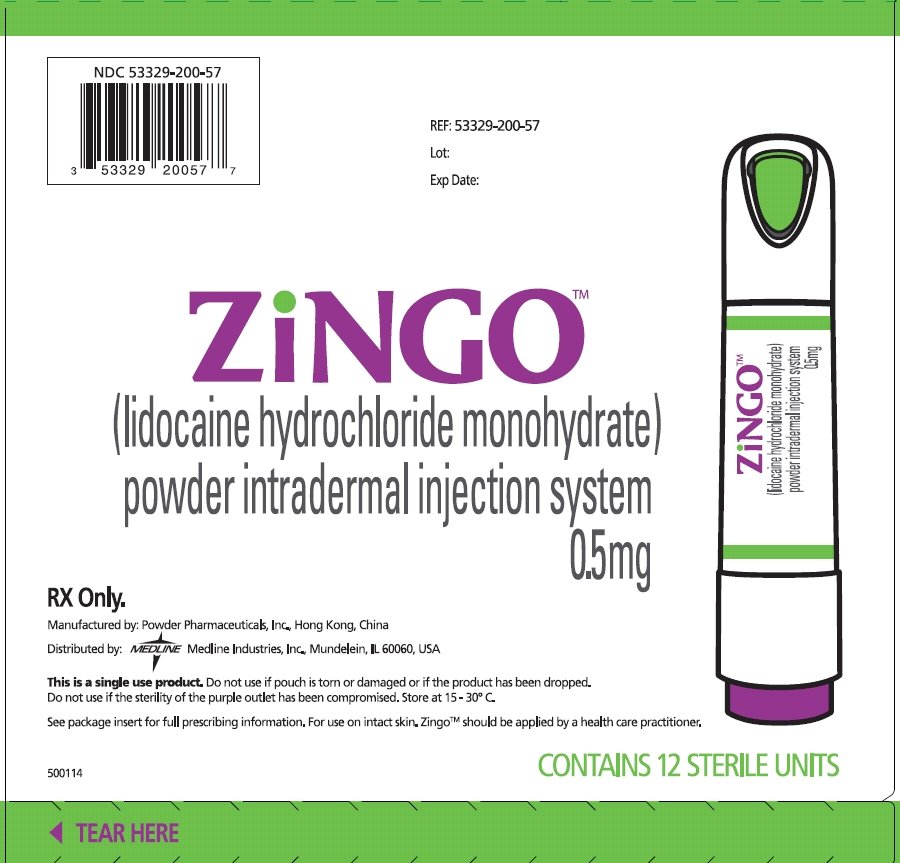