Indications and Usage for Triptodur

Triptodur is indicated for the treatment of pediatric patients 2 years of age and older with central precocious puberty (CPP).

Triptodur must be administered under the supervision of a physician.

The dosage of Triptodur is 22.5 mg reconstituted with accompanying diluent (Sterile Water) 2 mL, and administered as a single intramuscular injection once every 24 weeks.

Triptodur treatment should be discontinued at the appropriate age of onset of puberty at the discretion of the physician.

Monitor response to Triptodur with LH levels after a GnRH or GnRH agonist stimulation test, basal LH, or serum concentration of sex steroid levels beginning 1 to 2 months following initiation of therapy, during therapy as necessary to confirm maintenance of efficacy, and with each subsequent dose.

Noncompliance with drug regimen or inadequate dosing may result in inadequate control of the pubertal process with gonadotropins and/or sex steroids increasing above prepubertal levels. If the dose of Triptodur is not adequate switching to an alternative GnRH agonist for the treatment of CPP with the ability for dose adjustment may be necessary.

Please read these instructions completely before you begin.

Important: Once mixed, proceed to the next steps and administer without delay.

For extended-release injectable suspension: 22.5 mg of triptorelin as a lyophilized white to slightly yellow powder cake in a single-dose vial for reconstitution with the co-packaged 2 mL of diluent (Sterile Water) for Injection.

During the early phase of initial therapy or after subsequent doses, gonadotropins and sex steroids may rise above baseline because of a transient stimulatory effect of the drug [see Clinical Pharmacology (12.2)]. Therefore, a transient increase in clinical signs and symptoms of puberty, including vaginal bleeding, may be observed during the first weeks of therapy or after subsequent doses.

Psychiatric events have been reported in patients taking GnRH agonists, including triptorelin. Postmarketing reports with this class of drugs include symptoms of emotional lability, such as crying, irritability, impatience, anger, and aggression. Monitor for development or worsening of psychiatric symptoms during treatment with Triptodur [see Adverse Reactions (6)].

Postmarketing reports of convulsions have been observed in patients receiving GnRH agonists, including triptorelin. These included patients with a history of seizures, epilepsy, cerebrovascular disorders, central nervous system anomalies or tumors, and patients on concomitant medications that have been associated with convulsions such as bupropion and SSRIs. Convulsions have also been reported in patients in the absence of any of the conditions mentioned above [see Adverse Reactions (6)].

The following serious adverse reactions are described here and elsewhere in the label:

The safety of Triptodur was evaluated in one uncontrolled, open-label single-arm clinical trial in which 44 children with central precocious puberty received two doses of Triptodur and were observed for 12 months. The median age of the study population was 8 years (range 2-9 years) at treatment start; 88.6% of subjects were female, 59.1% were White, 27.3% were Black and 4.5% were Asian. Table 1 shows all the adverse reactions that occurred in at least 2 patients (≥4.5%) during the open-label single-arm trial.

The following adverse reactions have been identified during postapproval use of triptorelin. Because these reactions are reported voluntarily from a population of uncertain size, it is not always possible to reliably estimate their frequency or establish a causal relationship to drug exposure.

Psychiatric: Emotional lability, such as crying, irritability, impatience, anger, and aggression. Depression, including rare reports of suicidal ideation and attempt. Many, but not all, of these patients had a history of psychiatric illness or other comorbidities with an increased risk of depression.

Administration of Triptodur results in suppression of the pituitary-gonadal system.

Triptodur is contraindicated in women who are pregnant [see Contraindications (4)] since expected hormonal changes that occur with Triptodur treatment increase the risk for pregnancy loss. Available data with triptorelin use in pregnant women are insufficient to determine a drug-associated risk of adverse developmental outcomes. Based on mechanism of action in humans and findings of increased pregnancy loss in animal studies, Triptodur may cause fetal harm when administered to pregnant women. Advise pregnant women of the potential risk to a fetus.

In pregnant rats administered triptorelin at doses of 2, 10, and 100 mcg/kg/day during the period of organogenesis, maternal toxicity (decrease in body weight) and embryo-fetal toxicities (pre-implantation loss, increased resorption, and reduced number of viable fetuses) were observed at 100 mcg/kg, approximately 4 times the clinical dose based on body surface area. No embryonic and fetal developmental toxicities were observed in mice at doses up to 4 times the clinical dose. Teratogenic effects were not observed in viable fetuses in rats or mice.

There are no data on the presence of triptorelin in human milk, or the effects of the drug on the breastfed infant, or on milk production. The developmental and health benefits of breastfeeding should be considered along with the mother's clinical need for Triptodur and any potential adverse effects on the breastfed child from Triptodur or from the underlying maternal condition.

There is no experience with overdosage in clinical trials of triptorelin. If overdosage occurs, therapy should be discontinued and appropriate supportive and symptomatic treatment administered.

Triptodur contains the pamoate salt of triptorelin, a synthetic decapeptide analog of naturally occurring gonadotropin-releasing hormone (GnRH or LHRH). The chemical name of triptorelin pamoate is 5-oxo-L-prolyl-L-histidyl-L-tryptophyl-L-seryl-L-tyrosyl-D-tryptophyl-L-leucyl-L-arginyl-L-prolylglycine amide (pamoate salt). The molecular weight is 1699.9 and the structural formula is: 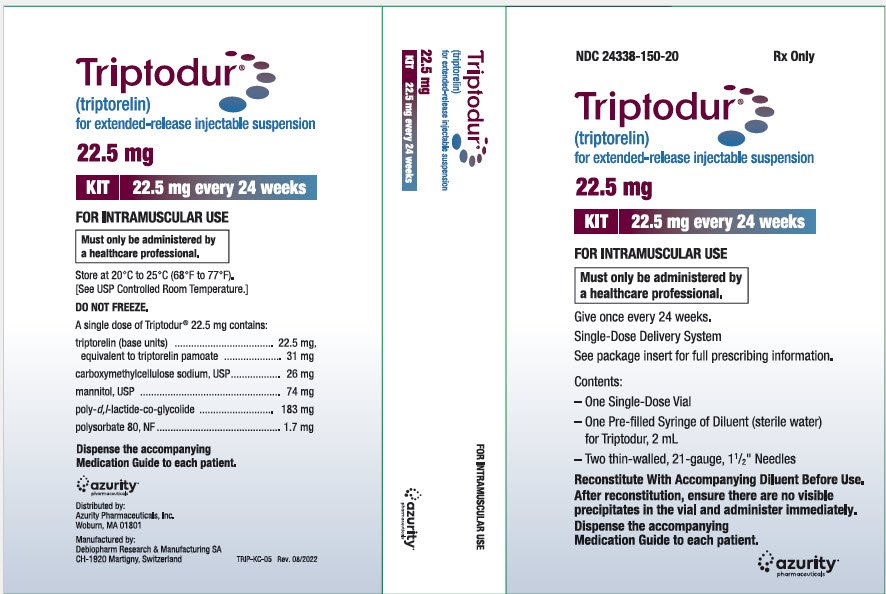 Triptodur for extended release injectable suspension for intramuscular use is provided as a sterile, lyophilized, biodegradable microgranule formulation in a single-dose vial, co-packaged with a syringe containing 2 mL Sterile Water for Injection for reconstitution of the lyophilisate. The triptorelin formulation is comprised of 22.5 mg triptorelin (equivalent to 31 mg triptorelin pamoate), poly-d,l-lactide-co-glycolide (183 mg), mannitol (74 mg), carboxymethylcellulose sodium (26 mg), and polysorbate 80 (1.7 mg). When 2 mL Sterile Water for Injection is added to the vial containing Triptodur and mixed, a suspension is formed which is intended as a single intramuscular injection.

Triptorelin is a GnRH agonist.

Following the first administration, there is a transient surge in circulating levels of LH, FSH, testosterone, and estradiol [see Warnings and Precautions (5.2)]. After chronic and continuous administration, by 4 weeks after initiation of therapy, a sustained decrease in LH and FSH secretion and marked reduction in sex steroids are observed.

After an initial intramuscular Triptodur 22.5 mg injection and a second 22.5 mg intramuscular injection 24 weeks later in children 2 to 9 years old with CPP, triptorelin peaked 4 hours postdose with a geometric mean Cmax of 39.9 and 36.5 ng/mL, respectively. No apparent accumulation of triptorelin occurred after the second injection. Absorption occurred in two phases, a burst phase followed by a maintenance release phase. In children with CPP, following the burst phase after the first 22.5 mg injection, geometric mean serum triptorelin levels were 0.11, 0.17, 0.05 and 0.03 ng/mL at Months 1, 2, 3, and 6, respectively.

There is no evidence that triptorelin, at clinically relevant concentrations, binds to plasma proteins.

The metabolism of triptorelin in humans is unknown, but is unlikely to involve hepatic microsomal enzymes (cytochrome P450). Thus far no metabolites of triptorelin have been identified. Pharmacokinetic data suggest that C-terminal fragments produced by tissue degradation are either completely degraded in the tissues, or rapidly degraded in plasma, or cleared by the kidneys.

After intravenous bolus injection of 0.5 mg triptorelin in adults, the two distribution half-lives were unaffected by renal impairment. However, renal insufficiency led to a decrease in total triptorelin clearance proportional to the decrease in creatinine clearance as well as increases in volume of distribution and consequently, an increase in the elimination half-life. Adult male subjects with moderate or severe renal impairment had approximately 2-fold higher exposure (AUC values) than young healthy adult males (see Table 1) [see Use in Specific Populations (8.6)].

After intravenous bolus injection of 0.5 mg triptorelin in adults, the two distribution half-lives were unaffected by hepatic impairment. In adult males with hepatic insufficiency, triptorelin clearance was reduced and exposure (AUC) was increased 3.7-fold compared to young healthy adult males (Table 2) [see Use in Specific Populations (8.7)].

In Vitro Assessment of Drug Interactions

In fresh human hepatocytes from three human donors, triptorelin did not induce CYP1A2 or CYP3A4/5 activity.

Triptorelin was a poor P-gp substrate and had no inhibitory effect toward P-gp.

After 60 days of subcutaneous treatment followed by a minimum of four estrus cycles prior to mating, triptorelin at doses of 2, 20, and 200 mcg/kg (approximately 0.07, 0.7, and 7 times the estimated human daily dose based on body surface area) or two monthly injections as slow release microspheres (~20 mcg/kg/day) had no effect on the fertility or general reproductive function of female rats.

No studies were conducted to assess the effect of triptorelin on male fertility.

In a single-arm open-label study, 44 children 2 to 9 years of age with CPP, 39 females and 5 males, all naïve to previous GnRH agonist treatment, were administered Triptodur 22.5 mg at a dosing interval of 24 weeks. Subjects were evaluated over two dosing intervals for a total of 12 months.

Triptodur 22.5 mg suppressed pituitary release of LH and FSH and, consequently, gonadal secretion of estradiol in girls and testosterone in boys (Table 3). At all timepoints evaluated, ≥93% of children achieved LH suppression to prepubertal levels (i.e., serum LH ≤5 IU/L 30 minutes after GnRH agonist stimulation), ≥79% of girls achieved prepubertal levels of estradiol (i.e., <20 pg/mL), and ≥80% of boys achieved prepubertal levels of testosterone (i.e., <30 ng/dL). Triptodur arrested or reversed progression of clinical signs of puberty with 95% of children showing no increase in the bone age/chronological age ratio, and 89% showing stabilization of sexual maturation at Month 12.

Following the second Triptodur injection, 22 children (all girls) were assessed for evidence of an acute-on-chronic phenomenon (i.e., increase in basal LH >5 IU/L or serum estradiol level >20 pg/mL 48 hours after the second triptorelin injection). Of these, one girl who achieved prepubertal hormone levels prior to the second injection showed biochemical evidence of acute-on-chronic phenomenon [see Warnings and Precautions (5.2) and Adverse Reactions (6.1)].

Inform caregivers that anaphylactic shock, hypersensitivity, and angioedema have been reported with triptorelin use and to immediately seek medical attention if any hypersensitivity reaction occurs.

Inform caregivers that during the first weeks after the first Triptodur injection, signs of puberty may occur such as vaginal bleeding [see Warnings and Precautions (5.1) and Adverse Reactions (6.1)]. Caregivers should notify the physician if these symptoms continue beyond the second month after Triptodur administration.

Inform caregivers that symptoms of emotional lability, such as crying, irritability, impatience, anger, and aggression have been observed in patients receiving GnRH agonists, including triptorelin. Alert caregivers to the possibility of development or worsening of psychiatric symptoms, including depression, during treatment with Triptodur [see Warnings and Precautions (5.2) and Adverse Reactions (6.2)].

Inform caregivers that reports of convulsions have been observed in patients receiving GnRH agonists, including triptorelin. Patients with a history of seizures, epilepsy, cerebrovascular disorders, central nervous system anomalies or tumors, and patients on concomitant medications that have been associated with convulsions may be at increased risk [see Warnings and Precautions (5.3)].

Inform patients and caregivers that reports of pseudotumor cerebri (idiopathic intracranial hypertension) have been observed in pediatric patients receiving GnRH agonists, including triptorelin. Monitor patients for signs and symptoms of pseudotumor cerebri, including headache, and vision issues such as blurred vision, double vision, loss of vision, pain behind the eye or pain with eye movement, ringing in the ears, dizziness, and nausea. Advise patients and caregivers to contact their healthcare provider if the patient develops any of these symptoms. [see Warnings and Precautions (5.4)].

Triptodur is contraindicated in pregnancy. If the patient becomes pregnant while taking the drug, the patient should be informed of the potential risk to fetus [see Use in Specific Populations (8.1)].

Compliance with the Dosing Schedule

Inform caregivers about the importance of adherence to the Triptodur dosing schedule of one injection every 24 weeks. Patients should not miss or delay a scheduled dose.

Triptodur is a registered trademark of Debiopharm International SA.
TRIP-MG-05

Reconstitute With Accompanying Diluent Before Use.

Dispense the accompanying
Medication Guide to each patient. 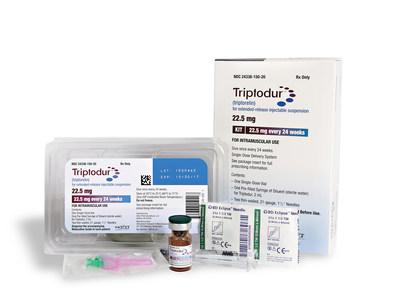