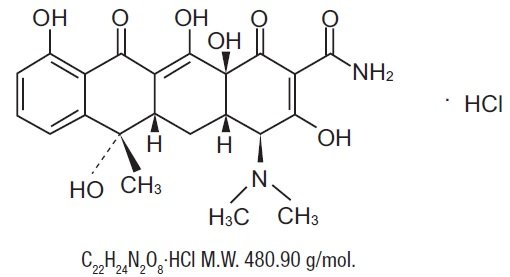 Tetracyclines are readily absorbed and are bound to plasma protein in varying degrees. They are concentrated by the liver in the bile and excreted in the urine and feces at high concentrations in a biologically active form.

Tetracyclines are primarily bacteriostatic and exert their antimicrobial effect by the inhibition of protein synthesis by binding to the 30S ribosomal subunit. Tetracycline is active against a broad range of gram-negative and gram-positive organisms. The drugs in the Tetracycline class have closely similar antimicrobial spectra, and cross-resistance among them is common.

Tetracycline has been shown to be active against most isolates of the following bacteria, both in vitro and in clinical infections as described in the INDICATIONS AND USAGE section of the package insert.

Indications and Usage for Tetracycline

To reduce the development of drug-resistant bacteria and maintain the effectiveness of Tetracycline hydrochloride and other antibacterial drugs, Tetracycline hydrochloride should be used only to treat infections that are proven or strongly suspected to be caused by susceptible bacteria. When culture and susceptibility information are available, they should be considered in selecting or modifying antibacterial therapy. In the absence of such data, local epidemiology and susceptibility patterns may contribute to the empiric selection of therapy.

Tetracycline is indicated in the treatment of infections caused by susceptible strains of the designated organisms in the conditions listed below:

When penicillin is contraindicated, Tetracyclines are alternative drugs in the treatment of the following infections:

This drug is contraindicated in persons who have shown hypersensitivity to any of the Tetracyclines.

The use of drugs of the Tetracycline-class during tooth development (last half of pregnancy, infancy and childhood to the age of 8 years) may cause permanent discoloration of the teeth (yellow-gray-brown). This adverse reaction is more common during long-term use of the drugs but it has been observed following repeated short-term courses. Enamel hypoplasia has also been reported. Tetracycline drugs should not be used in this age group, except for anthrax, unless other drugs are not likely to be effective or are contraindicated.

Clostridium difficile associated diarrhea (CDAD) has been reported with use of nearly all antibacterial agents, including Tetracyclines, and may range in severity from mild diarrhea to fatal colitis. Treatment with antibacterial agents alters the normal flora of the colon leading to overgrowth of C. difficile.

C. difficile produces toxins A and B which contribute to the development of CDAD. Hypertoxin producing strains of C. difficile cause increased morbidity and mortality, as these infections can be refractory to antimicrobial therapy and may require colectomy. CDAD must be considered in all patients who present with diarrhea following antibacterial drugs. Careful medical history is necessary since CDAD has been reported to occur over two months after the administration of antibacterial agents.

If CDAD is suspected or confirmed, ongoing use of antibacterial drugs not directed against C. difficile need to be discontinued. Appropriate fluid and electrolyte management, protein supplementation, antibacterial treatment of C. difficile, and institute surgical evaluation clinically indicated.

Photosensitivity manifested by an exaggerated sunburn reaction has been observed in some individuals taking Tetracyclines. Advise patients apt to be exposed to direct sunlight or ultraviolet lights that this reaction can occur with Tetracycline drugs. Discontinue treatment at the first evidence of skin erythema.

Intracranial hypertension (IH, pseudotumor cerebri) has been associated with the use of Tetracyclines including Tetracycline hydrochloride. Clinical manifestations of IH include headache, blurred vision, diplopia, and vision loss; papilledema can be found on fundoscopy. Women of childbearing age who are overweight or have a history of IH are at greater risk for developing Tetracycline associated IH. Concomitant use of isotretinoin and Tetracycline should be avoided because isotretinoin, a systemic retinoid, is also known to cause pseudotumor cerebri.

Although IH typically resolve after discontinuation of treatment, the possibility for permanent visual loss exists. If visual disturbance occurs during treatment, prompt ophthalmologic evaluation is warranted. Since intracranial pressure can remain elevated for weeks after drug cessation patients should be monitored until they stabilize.

All Tetracyclines form a stable calcium complex in any bone forming tissue. A decrease in fibula growth rate has been observed in premature infants given oral Tetracycline in doses of 25 mg/kg every six hours. This reaction was shown to be reversible when the drug was discontinued.

Results of animal studies indicate that Tetracyclines cross the placenta, are found in fetal tissues and can have toxic effects on the developing fetus (often related to retardation of skeletal development). Evidence of embryotoxicity has also been noted in animals treated early in pregnancy. If this drug is used during pregnancy or if the patient becomes pregnant while taking this drug, apprise the patient of the potential hazard to the fetus. Tetracycline drugs should not be used during pregnancy unless absolutely necessary.

The antianabolic action of the Tetracyclines may cause an increase in BUN. While this is not a problem in those with normal renal function, in patients with significantly impaired renal function, higher serum levels of Tetracycline may lead to azotemia, hyperphosphatemia and acidosis.

In long-term therapy, perform periodic laboratory evaluation of organ systems, including hematopoietic, renal and hepatic studies. If renal impairment exists, even usual oral or parenteral doses may lead to excessive systemic accumulation of the drug and possible liver toxicity. Under such conditions, lower than usual total doses are indicated, and, if therapy is prolonged, serum level determinations of the drug may be advisable.

As with other antibacterials, use of this drug may result in overgrowth of nonsusceptible organisms, including fungi. If superinfection occurs, discontinue antibacterial and institute appropriate therapy.

Treat all infections due to Group A beta-hemolytic streptococci for at least ten days.

Perform incision and drainage or other surgical procedures in conjunction with antibacterial therapy, when indicated.

Prescribing Tetracycline in the absence of proven or strongly suspected bacterial infection or a prophylactic indication is unlikely to provide benefit to the patient and increases the risk of the development of drug-resistant bacteria.

Counsel patients that antibacterial drugs including Tetracycline should only be used to treat bacterial infections. They do not treat viral infections (e.g., the common cold). When Tetracycline is prescribed to treat a bacterial infection, tell patients that although it is common to feel better early in the course of therapy, the medication should be taken exactly as directed. Skipping doses or not completing the full course of therapy may (1) decrease the effectiveness of the immediate treatment and (2) increase the likelihood that bacteria will develop resistance and will not be treatable by Tetracycline or other antibacterial drugs in the future.

In sexually transmitted infections, when coexistent syphilis is suspected, perform dark field examinations before treatment is started and the blood serology repeated monthly for at least four months.

Since bacteriostatic drugs may interfere with the bactericidal action of penicillin, it is advisable to avoid giving Tetracycline in conjunction with penicillin or other bactericidal antibacterials.

Because the Tetracyclines have been shown to depress plasma prothrombin activity, patients who are on anticoagulant therapy may require downward adjustment of their anticoagulant dosage.

The concurrent use of Tetracycline and methoxyflurane has been reported to result in fatal renal toxicity.

Absorption of Tetracyclines is impaired by antacids containing aluminum, calcium or magnesium and preparations containing iron, zinc, or sodium bicarbonate.

Concurrent use of Tetracycline may render oral contraceptives less effective.

Long-term animal studies are currently being conducted to determine whether Tetracycline hydrochloride has carcinogenic potential. Some related antibacterials (oxyTetracycline, minocycline) have shown evidence of oncogenic activity in rats.

Tetracycline hydrochloride had no effect on fertility when administered in the diet to male and female rats at a daily intake of approximately 400 mg/kg/day, roughly 8 times the highest recommended human dose based on body surface area.

The effect of Tetracyclines on labor and delivery is unknown.

Because of potential for serious adverse reaction in nursing infants from Tetracyclines, a decision should be made whether to discontinue the drug, taking into account the importance of the drug to the mother (see WARNINGS).

See WARNINGS and DOSAGE AND ADMINISTRATION.

Esophagitis and esophageal ulceration have been reported in patients receiving particularly the capsule and also the tablet forms of Tetracyclines.

Most of the patients were reported to have taken medication immediately before going to bed (see DOSAGE AND ADMINISTRATION).

Teeth: permanent discoloration of teeth may be caused during tooth development. Enamel hypoplasia has been reported (see WARNINGS).

Skin: maculopapular and erythrematous rashes. Exfoliative dermatitis has been reported. Onycholysis and discoloration of the nails have been reported. Photosensitivity is discussed in WARNINGS.

Renal Toxicity: an increase in BUN has been reported and is dose related.

Liver: hepatotoxicity and liver failure have been observed in patients receiving Tetracycline and in Tetracycline-treated patients with renal impairment.

When given over prolonged periods, Tetracyclines have been reported to produce brown-black microscopic discoloration of thyroid glands. No abnormalities of thyroid function studies are known to occur.

In case of overdosage, discontinue medication, treat symptomatically and institute supportive measures. Tetracycline is not dialyzable.

Administration of adequate amounts of fluid with the capsule formulation of Tetracycline is recommended to wash down the drug and reduce the risk of esophageal irritation and ulceration (see ADVERSE REACTIONS).

Absorption of Tetracycline is impaired by antacids containing aluminum, calcium or magnesium and preparations containing iron, zinc or sodium bicarbonate. Food and some dairy products also interfere with absorption.

When used in streptococcal infections, therapy should be continued for 10 days.

For treatment of brucellosis, 500 mg Tetracycline four times a day for three weeks accompanied by streptomycin, 1 gram intramuscularly twice daily the first week and once daily the second week.

For treatment of gonorrhea, the recommended dose is 500 mg by mouth four times a day for seven days.

Uncomplicated urethral, endocervical or rectal infections in adults caused by Chlamydiatrachomatis: 500 mg, by mouth, four times a day for at least seven days.

In cases of moderate to severe acne which, in the judgement of the clinician, require long-term treatment, the recommended initial dosage is 1 gram daily in divided doses. When improvement is noted, reduce dosage gradually to maintenance levels ranging from 125 mg to 500 mg daily. In some patients it may be possible to maintain adequate remission of lesions with alternate day or intermittent therapy. Tetracycline therapy of acne should augment the other standard measures known to be of value. Duration of long-term treatment which can safely be recommended has not been established (see WARNINGS and Carcinogenesis, Mutagenesis, Impairment of Fertility).

Use in Specific Population

In patients with renal impairment (see WARNINGS): decrease total dosage by reduction of recommended individual doses and/or by extending time intervals between doses.

How is Tetracycline Supplied

Dispense in a tight, light-resistant container as defined in the USP. Use child-resistant closure (as required).

Call your doctor for medical advice about side effects. You may report side effects to FDA at 1-800-FDA-1088.