Starlix is indicated as an adjunct to diet and exercise to improve glycemic control in adults with Type 2 diabetes mellitus.

Starlix should not be used in patients with Type 1 diabetes mellitus or for the treatment of diabetic ketoacidosis.

The recommended dose of Starlix is 120 mg orally three times daily before meals.

The recommended dose of Starlix is 60 mg orally three times daily before meals in patients who are near glycemic goal when treatment is initiated.

Instruct patients to take Starlix 1 to 30 minutes before meals.

In patients who skip meals, instruct patients to skip the scheduled dose of Starlix to reduce the risk of hypoglycemia [see Warnings and Precautions (5.1)].

Starlix is contraindicated in patients with a history of hypersensitivity to Starlix or its inactive ingredients.

All glinides, including Starlix, can cause hypoglycemia [see Adverse Reactions (6.1)]. Severe hypoglycemia can cause seizures, may be life-threatening, or cause death. Hypoglycemia can impair concentration ability and reaction time; this may place an individual and others at risk in situations where these abilities are important (e.g., driving or operating other machinery).

Factors which may increase the risk of hypoglycemia include changes in meal pattern (e.g., macronutrient content), changes in level of physical activity, changes to coadministered medication [see Drug Interactions (7)], and concomitant use with other antidiabetic agents. Patients with renal or hepatic impairment may be at higher risk of hypoglycemia [see Use in Specific Populations (8.6, 8.7), Clinical Pharmacology (12.3)].

There have been no clinical studies establishing conclusive evidence of macrovascular risk reduction with Starlix.

The following serious adverse reaction is also described elsewhere in the labeling:

Increases in Uric Acid: There were increases in mean uric acid levels for patients treated with Starlix alone, Starlix in combination with metformin, metformin alone, and glyburide alone. The respective differences from placebo were 0.29 mg/dL, 0.45 mg/dL, 0.28 mg/dL, and 0.19 mg/dL.

The following adverse reactions have been identified during post-approval use of Starlix. Because these reactions are reported voluntarily from a population of uncertain size, it is not always possible to reliably estimate their frequency or establish a causal relationship to drug exposure.

Table 2 includes a list of drugs with clinically important drug interactions when concomitantly administered or withdrawn with Starlix and instructions for managing or preventing them.

The available data from published literature and the applicant’s pharmacovigilance with use of Starlix in pregnant women are insufficient to identify a drug-associated risk of major birth defects, miscarriage or other adverse maternal or fetal outcomes. There are risks to the mother and fetus associated with poorly controlled diabetes in pregnancy (see Clinical Considerations). Starlix should be used during pregnancy only if the potential benefit justifies the potential risk to the fetus. In animal reproduction studies, there was no teratogenicity in rats and rabbits administered oral nateglinide during organogenesis at approximately 27 and 8 times the maximum recommended human dose (MRHD), respectively, based on body surface area (BSA).

The safety and effectiveness of Starlix have not been established in pediatric patients.

436 patients 65 years and older, and 80 patients 75 years and older were exposed to Starlix in clinical studies. No differences were observed in safety or efficacy of Starlix between patients age 65 and over, and those under age 65. However, greater sensitivity of some older individuals to Starlix therapy cannot be ruled out.

No dosage adjustment is recommended in patients with mild to severe renal impairment [see Clinical Pharmacology (12.3)].

There have been no instances of overdose with Starlix in clinical trials. However, an overdose may result in an exaggerated glucose-lowering effect with the development of hypoglycemic symptoms. Hypoglycemic symptoms without loss of consciousness or neurological findings should be treated with oral glucose and adjustments in dosage and/or meal patterns. Severe hypoglycemic reactions with coma, seizure, or other neurological symptoms should be treated with intravenous glucose. As Starlix is highly protein bound, dialysis is not an efficient means of removing it from the blood.

Starlix (nateglinide) is an oral blood glucose-lowering drug of the glinide class. Starlix, (-)-N-[(trans-4-isopropylcyclohexane)carbonyl]-D-phenylalanine, is structurally unrelated to the oral sulfonylurea insulin secretagogues.

The structural formula is as shown: 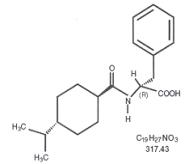 Nateglinide is a white powder with a molecular weight of 317.43 g/mol. It is freely soluble in methanol, ethanol, and chloroform, soluble in ether, sparingly soluble in acetonitrile and octanol, and practically insoluble in water. Starlix biconvex tablets contain 60 mg, or 120 mg, of nateglinide for oral administration.

Nateglinide lowers blood glucose levels by stimulating insulin secretion from the pancreas. This action is dependent upon functioning beta-cells in the pancreatic islets. Nateglinide interacts with the ATP-sensitive potassium (K+ATP) channel on pancreatic beta-cells. The subsequent depolarization of the beta cell opens the calcium channel, producing calcium influx and insulin secretion. The extent of insulin release is glucose dependent and diminishes at low glucose levels. Nateglinide is highly tissue selective with low affinity for heart and skeletal muscle.

Starlix stimulates pancreatic insulin secretion within 20 minutes of oral administration. When Starlix is dosed before meals, the peak rise in plasma insulin occurs approximately 1 hour after dosing and falls to baseline by 4 hours after dosing.

The pharmacokinetics of nateglinide are not affected by the composition of a meal (high protein, fat, or carbohydrate). However, peak plasma levels are significantly reduced when Starlix is administered 10 minutes prior to a liquid meal as compared to solid meal. When given with or after meals, the extent of nateglinide absorption (AUC) remains unaffected. However, there is a delay in the rate of absorption characterized by a decrease in Cmax and a delay in time to peak plasma concentration (Tmax).

Starlix did not have any effect on gastric emptying in healthy subjects as assessed by acetaminophen testing.

Following intravenous (IV) administration of nateglinide, the steady-state volume of distribution of nateglinide is estimated to be approximately 10 L in healthy subjects. Nateglinide is extensively bound (98%) to serum proteins, primarily serum albumin, and to a lesser extent α1 acid glycoprotein. The extent of serum protein binding is independent of drug concentration over the test range of 0.1 to 10 mcg/mL.

In vitro drug metabolism studies indicate that Starlix is predominantly metabolized by the cytochrome P450 isozyme CYP2C9 (70%) and to a lesser extent CYP3A4 (30%).

The major routes of metabolism are hydroxylation followed by glucuronide conjugation. The major metabolites are less potent antidiabetic agents than nateglinide. The isoprene minor metabolite possesses potency similar to that of the parent compound nateglinide.

In a cohort of 8 patients with Type 2 diabetes and end-stage renal disease (ESRD) (eGFR < 15 mL/min/1.73m2) M1 metabolite accumulation up to 1.2 ng/mL occurred with a dosage of 90 mg once daily for 1 to 3 months. In another cohort of 8 patients with Type 2 diabetes on hemodialysis, M1 concentration decreased after a single session of hemodialysis. Although the hypoglycemic activity of the M1 metabolite is approximately 5 times lower than nateglinide, metabolite accumulation may increase the hypoglycemic effect of the administered dose.

No clinically significant differences in nateglinide pharmacokinetics were observed between men and women.

Results of a population pharmacokinetic analysis including subjects of Caucasian, Black, and other ethnic origins suggest that race has little influence on the pharmacokinetics of nateglinide.

Age does not influence the pharmacokinetic properties of nateglinide.

In vitro assessment of drug interactions

Starlix is a potential inhibitor of the CYP2C9 isoenzyme in vivo as indicated by its ability to inhibit the in vitro metabolism of tolbutamide. Inhibition of CYP3A4 metabolic reactions was not detected in in vitro experiments.

In vitro displacement studies with highly protein-bound drugs such as furosemide, propranolol, captopril, nicardipine, pravastatin, glyburide, warfarin, phenytoin, acetylsalicylic acid, tolbutamide, and metformin showed no influence on the extent of nateglinide protein binding. Similarly, nateglinide had no influence on the serum protein binding of propranolol, glyburide, nicardipine, warfarin, phenytoin, acetylsalicylic acid, and tolbutamide in vitro. However, prudent evaluation of individual cases is warranted in the clinical setting.

In vivo assessment of drug interactions

Carcinogenicity: Nateglinide did not increase tumors in two year carcinogenicity studies conducted in mice and rats. Oral doses of Nateglinide up to 900 mg/kg in rats and 400 mg/kg in mice were tested, which produced exposures in rats approximately 30-40 times and in mice 10-30 times the human therapeutic exposure of nateglinide at a dose of 120 mg three times daily, based on AUC.

Mutagenesis: Nateglinide was not genotoxic in the in vitro Ames test, mouse lymphoma assay, chromosome aberration assay or in the in vivo mouse micronucleus test.

Impairment of Fertility: Fertility was unaffected by administration of nateglinide to rats at doses up to 600 mg/kg (corresponding to 16 times the MRHD of 120 mg three times per day, based on BSA).).

In a 24-week, double-blind, placebo-controlled study, patients with Type 2 diabetes were randomized to receive either Starlix (60 mg or 120 mg three times daily before meals) or placebo. Patients previously treated with antidiabetic medications were required to discontinue that medication for at least 2 months before randomization.

At Week 24, treatment with Starlix before meals resulted in statistically significant reductions in mean HbA1c and mean fasting plasma glucose (FPG) compared to placebo (see Table 5). The reductions in HbA1c and FPG were similar for patient’s naïve to, and those previously exposed to, antidiabetic medications.

In a 24-week, double-blind, active-controlled trial, patients with Type 2 diabetes who had been on a sulfonylurea for 3 or more months and who had a baseline HbA1c greater than or equal to 6.5% were randomized to receive Starlix (60 mg or 120 mg three times daily before meals) or glyburide 10 mg once daily. Patients randomized to Starlix had statistically significant increases in mean HbA1c and mean FPG at endpoint compared to patients randomized to glyburide.

Monotherapy and In Combination With Metformin

In another 24-week, double-blind, placebo-controlled trial, patients with Type 2 diabetes with HbA1c greater than or equal to 6.8% after treatment with metformin (greater than or equal to 1500 mg daily for at least 1 month) were first entered into a four week run-in period of metformin monotherapy (2000 mg daily) and then randomized to receive either Starlix (60 mg or 120 mg three times daily before meals) or placebo as add-on to metformin. At the end of treatment, Starlix 60 mg and 120 mg three times daily resulted in a statistically significantly greater reductions in HbA1c compared to placebo when added to metformin (-0.4% and -0.6% for Starlix 60 mg and Starlix 120 mg plus metformin, respectively).

A 24-week, double blind, multicenter, placebo-controlled trial was performed in patients with Type 2 diabetes not adequately controlled on rosiglitazone 8 mg daily. The addition of Starlix (120 mg three times per day with meals) was associated with statistically significantly greater reductions in HbA1c compared to placebo as add-on to rosiglitazone. The mean change in weight from baseline was + 3 kg for patients treated with Starlix compared to + 1 kg for patients treated with placebo when added to rosiglitazone.

In a 12-week study of patients with Type 2 diabetes inadequately controlled on glyburide 10 mg once daily, the addition of Starlix (60 mg or 120 mg three times daily before meals) did not produce any additional benefit.

Pink, round, beveled edge film-coated tablet with “Starlix” debossed on one side and “60” on the other.

Yellow, ovaloid film-coated tablet with “Starlix” debossed on one side and “120” on the other.

Advise patients that use of Starlix is not recommended while breastfeeding [see Use in Specific Populations (8.2)]. 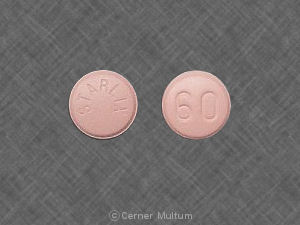