ROCKLATAN (netarsudil and latanoprost ophthalmic solution) 0.02%/0.005% is a fixed dose combination of a Rho kinase inhibitor and a prostaglandin F2α analogue indicated for the reduction of elevated intraocular pressure (IOP) in patients with open-angle glaucoma or ocular hypertension.

The recommended dosage is one drop in the affected eye(s) once daily in the evening. If one dose is missed, treatment should continue with the next dose in the evening. The dosage of ROCKLATAN should not exceed once daily.

ROCKLATAN contains latanoprost which has been reported to cause changes to pigmented tissues. The most frequently reported changes have been increased pigmentation of the iris, periorbital tissue (eyelid), and eyelashes. Pigmentation is expected to increase as long as latanoprost is administered.

Iris color change may not be noticeable for several months to years. Typically, the brown pigmentation around the pupil spreads concentrically towards the periphery of the iris and the entire iris or parts of the iris become more brownish. Neither nevi nor freckles of the iris appear to be affected by treatment. While treatment with ROCKLATAN can be continued in patients who develop noticeably increased iris pigmentation, these patients should be examined regularly [see Patient Counseling Information (17)].

ROCKLATAN contains latanoprost which may gradually change eyelashes and vellus hair in the treated eye; these changes include increased length, thickness, pigmentation, the number of lashes or hairs, and misdirected growth of eyelashes. Eyelash changes are usually reversible upon discontinuation of treatment [see Patient Counseling Information (17)].

There have been reports of bacterial keratitis associated with the use of multiple-dose containers of topical ophthalmic products. These containers had been inadvertently contaminated by patients who, in most cases, had a concurrent corneal disease or a disruption of the ocular epithelial surface [see Patient Counseling Information (17)].

Other adverse reactions that have been reported with the individual components and not listed above include:

In vitro drug interaction studies have shown that precipitation can occur when eye drops containing thimerosal are mixed with ROCKLATAN. If such drugs are used, they should be administered at least five (5) minutes apart.

The combined use of two or more prostaglandins or prostaglandin analogs including latanoprost ophthalmic solution 0.005% is not recommended. It has been shown that administration of these prostaglandin drug products more than once daily may decrease the IOP lowering effect or cause paradoxical elevations in IOP.

Risk Summary
There are no adequate and well-controlled studies of ROCKLATAN ophthalmic solution or its pharmacologically active ingredients (netarsudil and latanoprost) in pregnant women to inform any drug associated risk. However, systemic exposure to netarsudil from ocular administration is low [see Clinical Pharmacology (12.3)].

Reproduction studies of latanoprost showed embryofetal lethality in rabbits. No embryofetal lethality was observed at a dose approximately 15 times higher than the recommended human ophthalmic dose (RHOD). Intravenous administration of netarsudil to pregnant rats and rabbits during organogenesis did not produce adverse embryofetal effects at clinically relevant systemic exposures. ROCKLATAN should be used during pregnancy only if the potential benefit justifies the potential risk to the fetus.

The developmental and health benefits of breastfeeding should be considered along with the mother’s clinical need for ROCKLATAN and any potential adverse effects on the breast-fed child from ROCKLATAN.

No overall differences in safety or effectiveness have been observed between elderly and other adult patients.

ROCKLATAN (netarsudil and latanoprost ophthalmic solution) 0.02%/0.005% is a fixed dose combination of a Rho kinase inhibitor and a prostaglandin F2α analogue.

The chemical name of netarsudil dimesylate is: (S)-4-(3-amino-1-(isoquinolin-6-yl-amino)-1-oxopropan-2-yl)benzyl 2,4-dimethylbenzoate dimesylate. Its molecular formula is C30H35N3O9S2 and its chemical structure is: 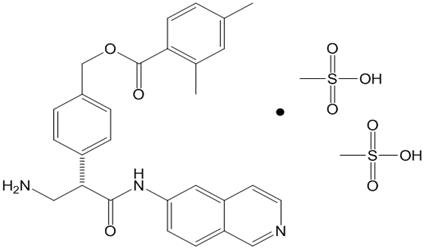 Netarsudil mesylate is a light yellow to white powder that is freely soluble in water, soluble in methanol, sparingly soluble in dimethyl formamide, and practically insoluble in dichloromethane and heptane.

The chemical name of latanoprost is: isopropyl-(Z)-7[1R,2R,3R,5S) 3,5-dihydroxy-2-[(3R)-3-hydroxy-5-phenylpentyl]cyclopentyl]-5-heptenoate. Its molecular formula is C26H40O5 and its chemical structure is: 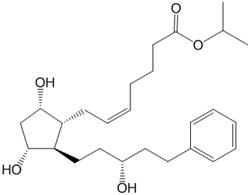 ROCKLATAN is believed to reduce IOP by increasing the outflow of aqueous humor.

Absorption
The systemic exposures of netarsudil and its active metabolite, AR-13503, were evaluated in 18 healthy subjects after topical ocular administration of netarsudil ophthalmic solution 0.02% once daily (1 drop bilaterally in the morning) for 8 days. There were no quantifiable plasma concentrations of netarsudil (lower limit of quantitation (LLOQ) 0.100 ng/mL) post dose on Day 1 and Day 8. Only 1 plasma concentration at 0.11 ng/mL for the active metabolite was observed for 1 subject on Day 8 at 8 hours post-dose.

Distribution
The distribution volume in humans is 0.16 ± 0.02 L/kg. Latanoprost is absorbed through the cornea where the isopropyl ester prodrug is hydrolyzed to the acid form to become biologically active. The acid of latanoprost can be measured in aqueous humor during the first 4 hours, and in plasma only during the first hour after local administration.

Metabolism
After topical ocular dosing, netarsudil is metabolized by esterases in the eye to an active metabolite, AR-13503.

Latanoprost, an isopropyl ester prodrug, is hydrolyzed by esterases in the cornea to the biologically active acid. The active acid of latanoprost reaching the systemic circulation is primarily metabolized by the liver to the 1,2-dinor and 1,2,3,4-tetranor metabolites via fatty acid β-oxidation.

Excretion
The elimination of the acid of latanoprost from human plasma is rapid (t½ = 17 min) after both intravenous and topical administration. Systemic clearance is approximately 7 mL/min/kg. Following hepatic β-oxidation, the metabolites are mainly eliminated via the kidneys. Approximately 88% and 98% of the administered dose are recovered in the urine after topical and intravenous dosing, respectively.

Carcinogenesis
Long-term studies in animals have not been performed to evaluate the carcinogenic potential of netarsudil.

Latanoprost was not carcinogenic in either mice or rats when administered by oral gavage at doses of up to 170 mcg/kg/day (approximately 2800 times the RHOD) for up to 20 and 24 months, respectively.

Mutagenesis
Netarsudil was not mutagenic in the Ames test, in the mouse lymphoma test, or in the in vivo rat micronucleus test.

Latanoprost was not mutagenic in bacteria, in mouse lymphoma, or in mouse micronucleus tests. Chromosome aberrations were observed in vitro with human lymphocytes. Additional in vitro and in vivo studies on unscheduled DNA synthesis in rats were negative.

Impairment of Fertility
Studies to evaluate the effects of netarsudil on male or female fertility in animals have not been performed.

Latanoprost has not been found to have effects on male or female fertility in animal studies.

ROCKLATAN (netarsudil and latanoprost ophthalmic solution) 0.02%/0.005% was evaluated in 2 randomized and controlled clinical trials, namely PG324-CS301 (NCT 02558400, referred to as Study 301) and PG324-CS302 (NCT 02674854, referred to as Study 302) in patients with open-angle glaucoma and ocular hypertension. Studies 301 and 302 enrolled subjects with IOP < 36 mmHg and compared IOP lowering effect of ROCKLATAN dosed once daily to individually administered netarsudil 0.02% once daily and latanoprost 0.005% once daily. The treatment duration was 12 months for Study 301 and 3 months for Study 302.

The average IOP lowering effect of ROCKLATAN was 1 to 3 mmHg greater than monotherapy with either netarsudil 0.02% or latanoprost 0.005% throughout 3 months (Figures 1 and 2). In Study 301 IOP reductions were maintained throughout 12 months.

The least square mean IOP at each post-baseline time point was derived using an analysis of covariance adjusted for baseline IOP and based on observed data for all randomized subjects (238 in Rocklatan group, 244 in netarsudil group, 236 in latanoprost group).

The least square mean IOP at each post-baseline time point was derived using an analysis of covariance adjusted for baseline IOP and based on observed data for all randomized subjects (245 in Rocklatan group, 255 in netarsudil group, 250 in latanoprost group).

Potential for Eyelash Changes
Inform patients of the possibility of eyelash and vellus hair changes in the treated eye during treatment with ROCKLATAN. These changes may result in a disparity between eyes in length, thickness, pigmentation, number of eyelashes or vellus hairs, and/or direction of eyelash growth. Eyelash changes are usually reversible upon discontinuation of treatment.

Handling the Container
Instruct patients to avoid allowing the tip of the dispensing container to contact the eye, surrounding structures, fingers, or any other surface in order to minimize contamination of the solution. Serious damage to the eye and subsequent loss of vision may result from using contaminated solutions [see Warnings and Precautions (5.6)].

When to Seek Physician Advice
Advise patients that if they develop an intercurrent ocular condition (e.g., trauma or infection), have ocular surgery, or develop any ocular reactions, particularly conjunctivitis and eyelid reactions, they should immediately seek their physician’s advice concerning the continued use of ROCKLATAN.

Use with Contact Lenses
Advise patients that ROCKLATAN contains benzalkonium chloride, which may be absorbed by soft contact lenses. Contact lenses should be removed prior to instillation of ROCKLATAN and may be reinserted 15 minutes following its administration.

Use with Other Ophthalmic Drugs
If more than 1 topical ophthalmic drug is being used, the drugs should be administered at least 5 minutes between applications.

Missed Dose
Advise patients that if one dose is missed, treatment should continue with the next dose in the evening. 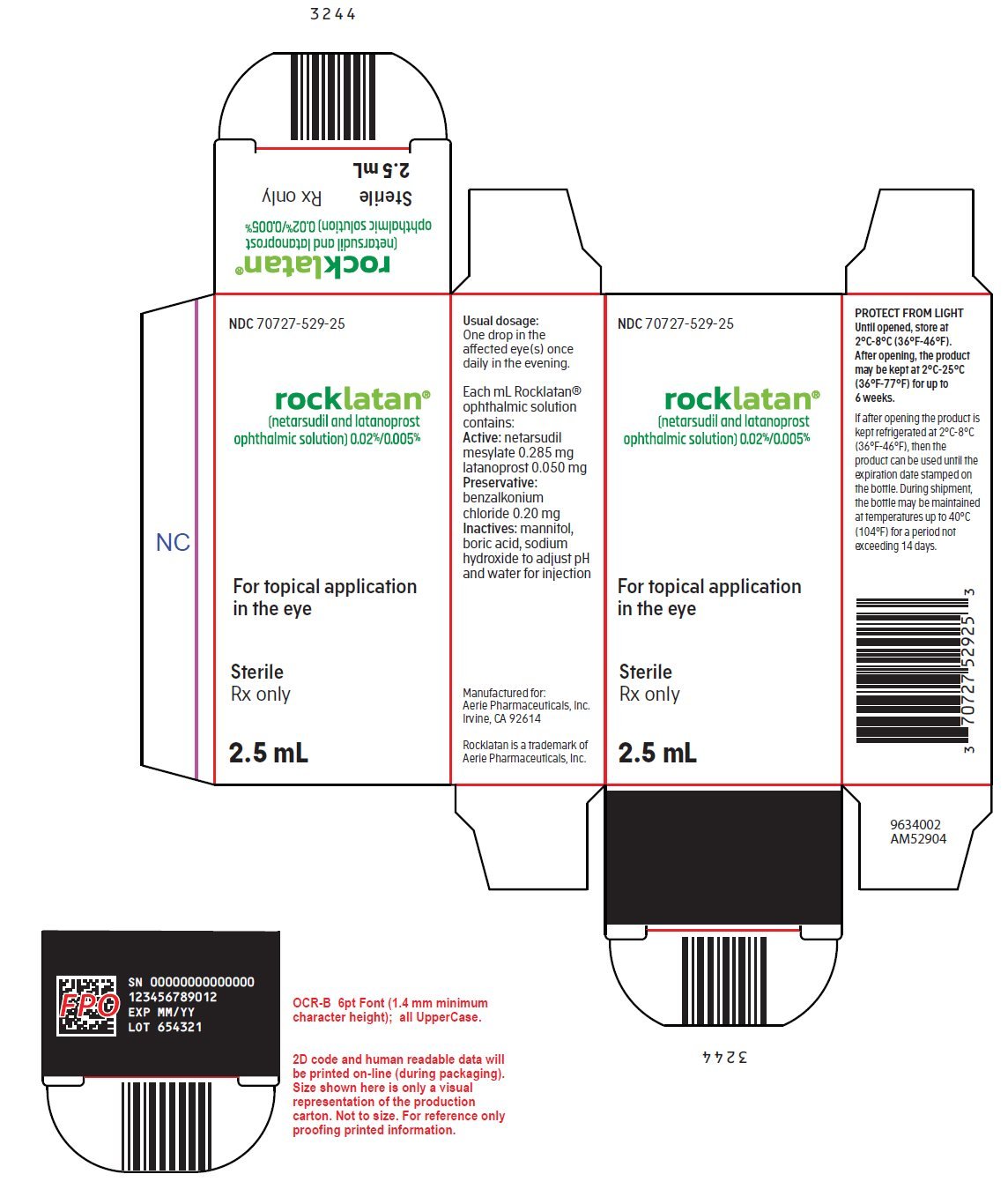 For topical application in the eye 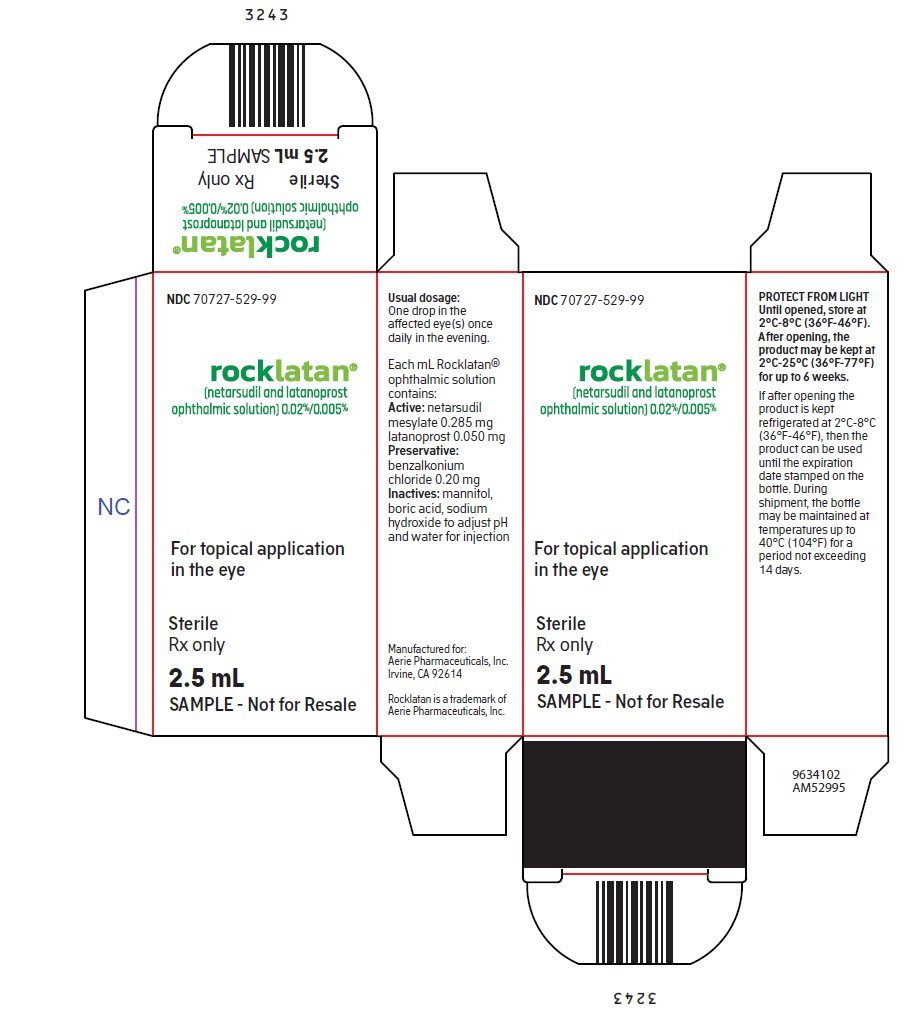 For topical application in the eye

SAMPLE – Not for Resale