Indications and Usage for Retavase

Retavase is indicated for use in acute ST-elevation myocardial infarction (STEMI) to reduce the risk of death and heart failure.

Limitation of Use: The risk of stroke may outweigh the benefit produced by thrombolytic therapy in patients whose STEMI puts them at low risk for death or heart failure.

As soon as possible after the onset of STEMI, administer 10 units intravenously over 2 minutes. Administer a second dose of 10 units 30 minutes after the first dose.

Reconstitute Retavase only with the supplied Sterile Water for Injection. Slight foaming upon reconstitution may occur; if necessary allow the vial to stand undisturbed for several minutes to allow dissipation of any large bubbles. Prior to administration, inspect the product for particulate matter and discoloration.

Use aseptic technique throughout.

Step 2: Clean the rubber closure with an alcohol wipe (not contained within kit).

Step 3: Connect the sterile pre-filled syringe to the reconstitution spike.

Step 4: Remove the protective cap from the spike end of the reconstitution spike and firmly insert the spike into the vial of Retavase.

Step 5: Connect the syringe plunger to the sterile 10 mL pre-filled syringe by screwing the plunger into the rubber stopper.

Step 6: Transfer the 10 mL of Sterile Water for Injection through the reconstitution spike into the vial of Retavase.

Step 7: With the reconstitution spike and empty pre-filled syringe still attached to the vial, swirl the vial gently until the contents are fully dissolved, may take up to 2 minutes. DO NOT SHAKE. Upon reconstitution, the solution should be clear and colorless. Discard if particulate matter or discoloration is observed. The resulting solution concentration is 1 unit/mL and delivers 10 mL (10 units reteplase).

Heparin and Retavase are incompatible. Do not administer Retavase through an intravenous line containing heparin.

For Injection: 10 units as a lyophilized powder in single-use vials for reconstitution co-packaged with Sterile Water for Injection, USP in 10 mL prefilled syringe.

Because thrombolytic therapy increases the risk of bleeding, Retavase is contraindicated in the following situations:

Retavase can cause significant and sometimes fatal bleeding. Avoid intramuscular injections and other trauma to a patient administered Retavase. Minimize venipunctures. Avoid puncturing noncompressible veins, such as the internal jugular and subclavian. If an arterial puncture is necessary, use an upper extremity vessel that is accessible to manual compression, apply pressure for at least 30 minutes, and monitor the puncture site closely. As fibrin is lysed during Retavase therapy, bleeding from recent puncture sites or other recent trauma may occur.

Should serious bleeding (not controllable by local pressure) occur, terminate concomitant anticoagulant therapy. Withhold the second Retavase dose if serious bleeding occurs before it is administered.

Coagulation tests and measures of fibrinolytic activity are unreliable during Retavase therapy unless specific precautions are taken to prevent in vitro artifacts. When present in blood at pharmacologic concentrations, Retavase remains active under in vitro conditions, which can result in degradation of fibrinogen in blood samples removed for analysis.

The following adverse reactions are discussed in greater detail in the other sections of the label:

The most frequent adverse reaction associated with Retavase is bleeding.

In these studies the severity and sites of bleeding events were similar for Retavase and the comparison thrombolytic agents.

Among the 2,965 patients receiving Retavase in the INJECT trial, serious allergic reactions were noted in 3 patients, with one patient experiencing dyspnea and hypotension.

Limited published data with Retavase use in pregnant women are insufficient to inform a drug associated risk of adverse developmental outcomes. In animal reproduction studies, reteplase administered to pregnant rabbits resulted in hemorrhaging in the genital tract, leading to abortions in mid-gestation in doses 3 times the human dose; however, there was no evidence of fetal anomalies in rats at doses up to 15 times the human dose.

The most common complication of thrombolytic therapy is bleeding and pregnancy may increase this risk.

Reteplase was administered to pregnant rabbits in doses 3 times the human dose (0.86 units/kg) resulting in hemorrhaging in the genital tract, leading to abortions in mid-gestation. In animal developmental studies in rats at Reteplase doses up to 15 times the human dose (4.31 units/kg), there was no evidence of fetal anomalies.

There are no data on the presence of reteplase in either human or animal milk, the effects on the breastfed infant, or the effects on milk production. RETEVASE has not been studied in nursing mothers.

Safety and effectiveness of Retavase in pediatric patients have not been established.

Reteplase is a non-glycosylated deletion mutein of tissue plasminogen activator (tPA), containing the kringle 2 and the protease domains of human tPA. Reteplase contains 355 of the 527 amino acids of native tPA (amino acids 1-3 and 176-527). Reteplase is produced by recombinant DNA technology in E. coli. The protein is isolated as inactive inclusion bodies from E. coli, converted into its active form by an in vitro folding process and purified by chromatographic separation. The molecular weight of Reteplase is 39,571 daltons.

Potency is expressed in units (U) using a reference standard which is specific for Retavase and is not comparable with units used for other thrombolytic agents.

Retavase (reteplase) for Injection is a sterile, white, lyophilized powder for intravenous injection after reconstitution with Sterile Water for Injection, USP (without preservatives). Following reconstitution with 10 mL of Sterile Water for Injection, the resulting concentration is 1 unit/mL to allow for delivery of 10 mL (10 units reteplase). The pH is 6.0 ± 0.3. Retavase is supplied with overfill to ensure sufficient drug for administration of each 10 unit injection.

Retavase is a recombinant plasminogen activator which catalyzes the cleavage of endogenous plasminogen to generate plasmin. Plasmin in turn degrades the fibrin matrix of the thrombus, thereby exerting its thrombolytic action.

In a controlled trial, 36 of 56 patients treated for myocardial infarction had a decrease in fibrinogen levels to below 100 mg/dL by 2 hours following the administration of Retavase as two intravenous injections (10 + 10 unit) in which 10 units was followed 30 minutes later by a second dose of 10 units. The mean fibrinogen level returned to the baseline value by 48 hours.

Long-term studies in animals have not been performed to evaluate the carcinogenic potential of Retavase. Studies to determine mutagenicity, chromosomal aberrations, gene mutations, and micronuclei induction were negative at all concentrations tested.

Retavase was evaluated in three controlled clinical studies comparing Retavase to other thrombolytic agents. In all three studies, patients were treated with aspirin (initial doses of 160 mg to 350 mg and subsequent doses of 75 mg to 350 mg) and heparin (a 5,000 unit IV bolus prior to the administration of Retavase or control, followed by a 1000 unit/hour continuous IV infusion for at least 24 hours).

The INJECT study compared Retavase to streptokinase on mortality rates at 35 days following acute ST-elevation myocardial infarction (STEMI). INJECT was a double-blind study in which 6,010 patients with no more than 12 hours of chest pain consistent with coronary ischemia and either ST segment elevation or bundle branch block on ECG were randomized 1:1 to Retavase (10 + 10 unit) or streptokinase (1.5 million units over 60 minutes). Patients with cerebrovascular or other bleeding risks or with systolic blood pressure >200 mm Hg or diastolic blood pressure >100 mm Hg were excluded from enrollment. The study was designed to determine whether the effect of Retavase on survival was noninferior to that of streptokinase by ruling out with 95% confidence that 35-day mortality among Retavase patients was no more than 1% higher than among streptokinase patients. The results of the primary endpoint (mortality at 35 days), 6-month mortality, and selected other in-hospital endpoints are shown in Table 2.

In both clinical trials the re-occlusion rates were similar for Retavase and alteplase.

Retavase (reteplase) for Injection is supplied as a sterile, preservative-free, lyophilized powder in 10 unit vials without a vacuum, in the following packaging configurations:

Storage: Store Retavase at 2°C to 25°C (36°F to 77°F). The box should remain sealed until use to protect the lyophilisate from exposure to light.

Retavase® is a registered trademark of Chiesi USA, Inc.

The trademarks Streptase®, Activase®, and Actilyse® referenced herein are the property of their respective owners and are not affiliated with, connected to, or sponsored by Chiesi USA, Inc. 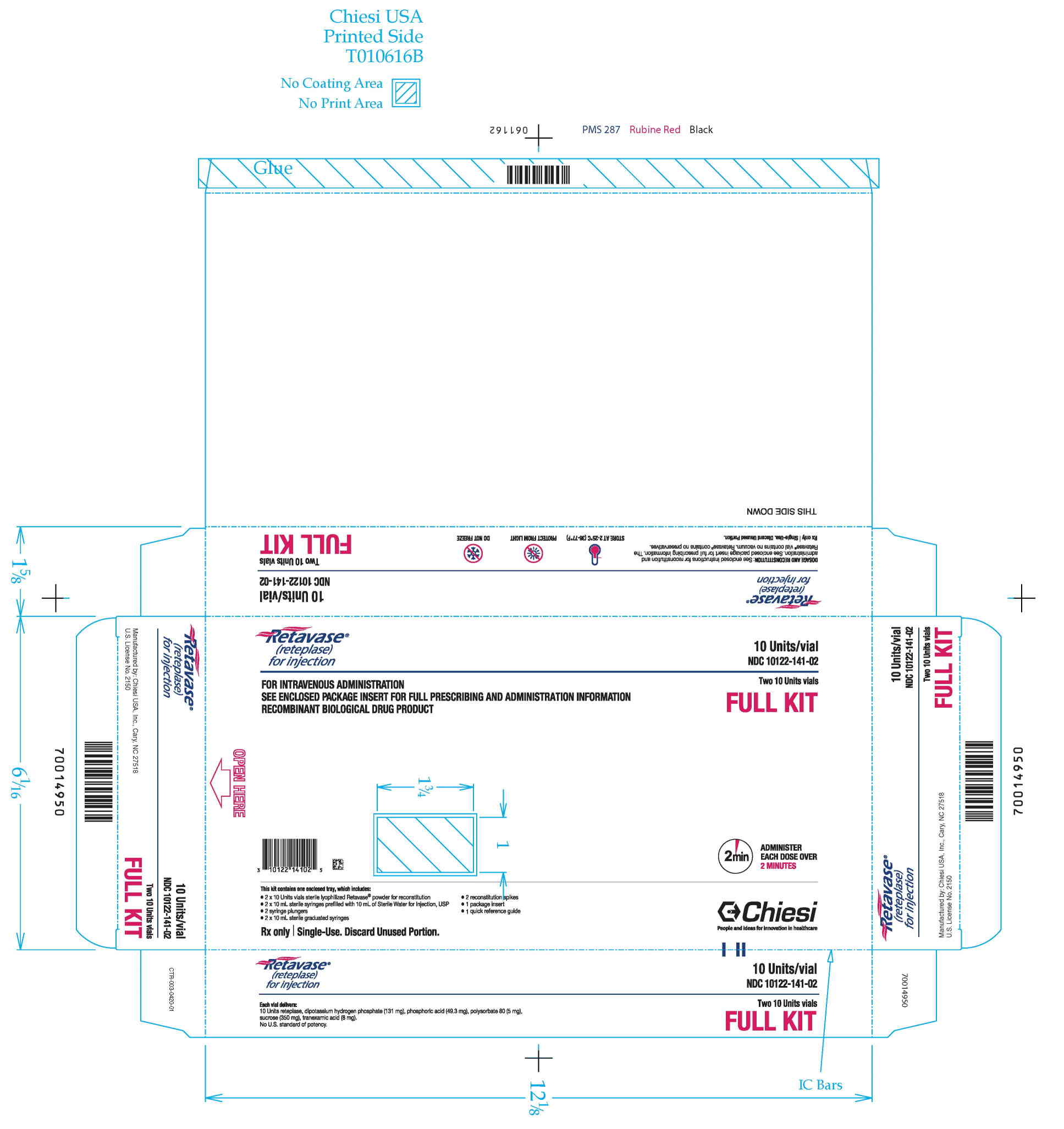 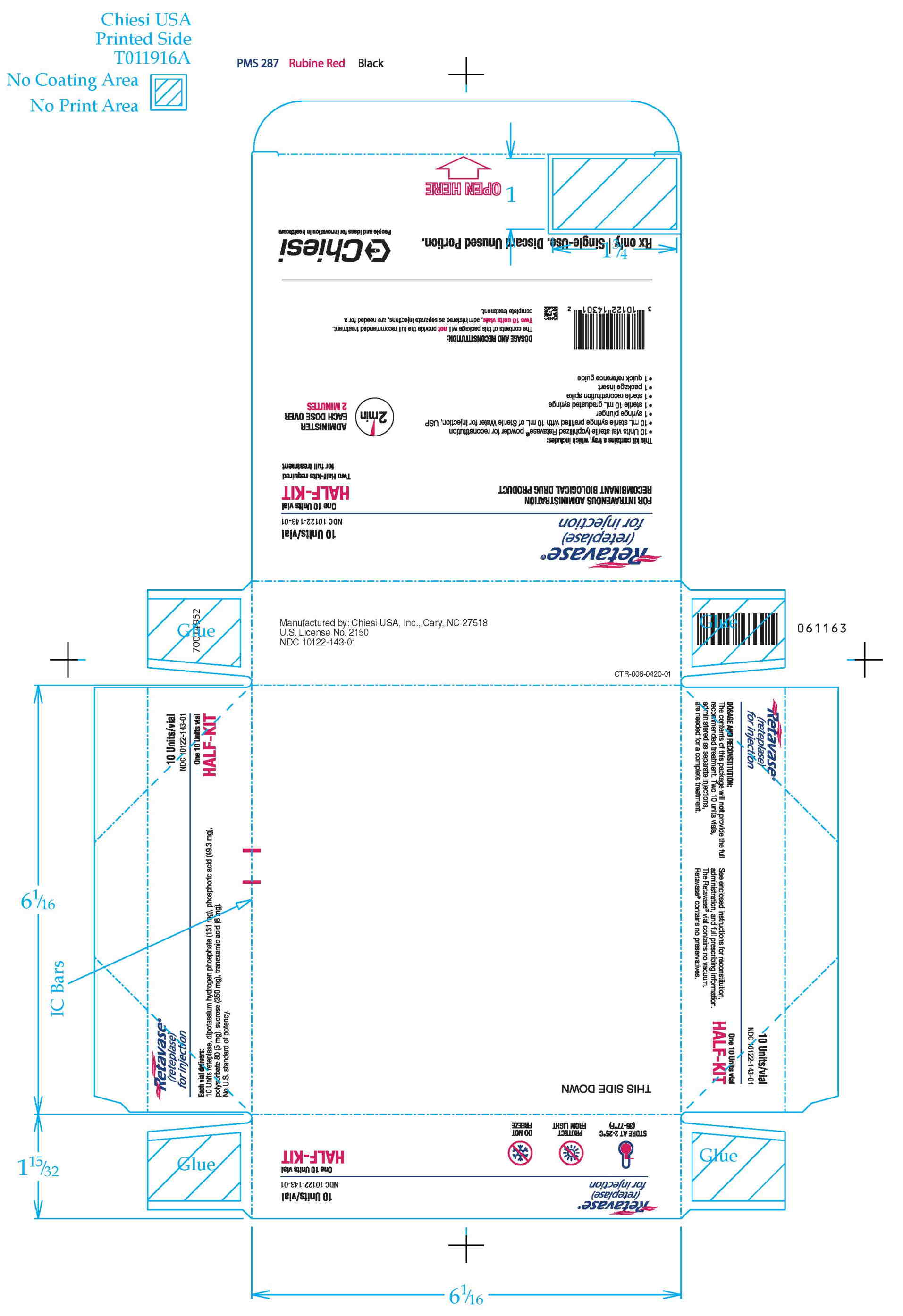