The Periostat brand name has been discontinued in the U.S. If generic versions of this product have been approved by the FDA, there may be generic equivalents available.

Periostat is available as a 20 mg tablet formulation of doxycycline for oral administration.

The structural formula of doxycycline hyclate is:

with an empirical formula of (C22H24N2O8•HCl)2•C2H6O•H2O and a molecular weight of 1025.89. The chemical designation for doxycycline is 4-(dimethylamino)-1,4,4a,5,5a,6,11,12a-octahydro-3,5,10,12,12a-pentahydroxy-6-methyl-1,11-dioxo-2-naphthacenecarboxamide monohydrochloride, compound with ethyl alcohol (2:1), monohydrate. Doxycycline hyclate is a yellow to light-yellow crystalline powder which is soluble in water.

After oral administration, doxycycline hyclate is rapidly and nearly completely absorbed from the gastrointestinal tract. Doxycycline is eliminated with a half-life of approximately 18 hours by renal and fecal excretion of unchanged drug.

Microbiology: Doxycycline is a member of the tetracycline class of antibiotics. The dosage of doxycycline achieved with this product during administration is well below the concentration required to inhibit microorganisms commonly associated with adult periodontitis. Clinical studies with this product demonstrated no effect on total anaerobic and facultative bacteria in plaque samples from patients administered this dose regimen for 9 to 18 months. This product should not be used for reducing the numbers of or eliminating those microorganisms associated with periodontitis.

The pharmacokinetics of doxycyline following oral administration of Periostat were investigated in 4 volunteer studies involving 107 adults. Additionally, doxycycline pharmacokinetics have been characterized in numerous scientific publications.4 Pharmacokinetic parameters for Periostat following single oral doses and at steady-state in healthy subjects are presented as follows:

Absorption: Doxycycline is well absorbed after oral administration. In a single-dose study, concomitant administration of Periostat with a 1000 calorie, high-fat, high-protein meal which included dairy products, in healthy volunteers, resulted in a decrease in the rate and extent of absorption and delay in the time to maximum concentrations.

Distribution: Doxycycline is greater than 90% bound to plasma proteins. Its apparent volume of distribution is variously reported as between 52.6 and 134 L.4,6

Metabolism: Major metabolites of doxycycline have not been identified. However, enzyme inducers such as barbiturates, carbamazepine, and phenytoin decrease the half-life of doxycycline.

Excretion: Doxycycline is excreted in the urine and feces as unchanged drug. It is variously reported that between 29% and 55.4% of an administered dose can be accounted for in the urine by 72 hours.5,6 Half-life averaged 18 hours in subjects receiving a single 20 mg doxycycline dose.

Geriatric: Doxycycline pharmacokinetics have not been evaluated in geriatric patients.

Pediatric: Doxycycline pharmacokinetics have not been evaluated in pediatric patients (See WARNINGS section).

Gender: Doxycycline pharmacokinetics were compared in 9 men and 11 women under fed and fasted conditions. While female subjects had a higher rate (Cmax) and extent of absorption (AUC), these differences are thought to be due to differences in body weight/lean body mass. Differences in other pharmacokinetic parameters were not significant.

Race: Differences in doxycycline pharmacokinetics among racial groups have not been evaluated.

Hepatic Insufficiency: Doxycycline pharmacokinetics have not been evaluated in patients with hepatic insufficiency.

In a randomized, multi-centered, double-blind, 9-month Phase 3 study involving 190 adult patients with periodontal disease [at least two probing sites per quadrant of between 5 and 9 mm pocket depth (PD) and attachment level (ALv)], the effects of oral administration of 20 mg twice a day of doxycycline hyclate (using a bioequivalent capsule formulation) plus scaling and root planing (SRP) were compared to placebo control plus SRP. Both treatment groups were administered a course of scaling and root planing in 2 quadrants at Baseline. Measurements of ALv, PD and bleeding-on-probing (BOP) were obtained at Baseline, 3, 6, and 9 months from each site about each tooth in the two quadrants that received SRP using the UNC-15 manual probe. Each tooth site was categorized into one of three strata based on Baseline PD: 0-3 mm (no disease), 4-6 mm (mild/moderate disease), ≥ 7 mm (severe disease). For each stratum and treatment group, the following were calculated at month 3, 6, and 9: mean change in ALv from baseline, mean change in PD from baseline, mean percentage of tooth sites per patient exhibiting attachment loss of ≥ 2 mm from baseline, and percentage of tooth sites with bleeding on probing. The results are summarized in the following table.

Indications and Usage for Periostat

Periostat is indicated for use as an adjunct to scaling and root planing to promote attachment level gain and to reduce pocket depth in patients with adult periodontitis.

This drug is contraindicated in persons who have shown hypersensitivity to doxycycline or any of the other tetracyclines.

THE USE OF DRUGS OF THE TETRACYCLINE CLASS DURING TOOTH DEVELOPMENT (LAST HALF OF PREGNANCY, INFANCY AND CHILDHOOD TO THE AGE OF 8 YEARS) MAY CAUSE PERMANENT DISCOLORATION OF THE TEETH (YELLOW-GRAY-BROWN). This adverse reaction is more common during long-term use of the drugs but has been observed following repeated short-term courses. Enamel hypoplasia has also been reported. TETRACYCLINE DRUGS, THEREFORE, SHOULD NOT BE USED IN THIS AGE GROUP AND IN PREGNANT OR NURSING MOTHERS UNLESS THE POTENTIAL BENEFITS MAY BE ACCEPTABLE DESPITE THE POTENTIAL RISKS.

All tetracyclines form a stable calcium complex in any bone forming tissue. A decrease in fibula growth rate has been observed in premature infants given oral tetracyclines in doses of 25 mg/kg every 6 hours. This reaction was shown to be reversible when the drug was discontinued.

Doxycycline can cause fetal harm when administered to a pregnant woman. Results of animal studies indicate that tetracyclines cross the placenta, are found in fetal tissues, and can have toxic effects on the developing fetus (often related to retardation of skeletal development). Evidence of embryotoxicity has also been noted in animals treated early in pregnancy. If any tetracyclines are used during pregnancy, or if the patient becomes pregnant while taking this drug, the patient should be apprised of the potential hazard to the fetus.

Photosensitivity manifested by an exaggerated sunburn reaction has been observed in some individuals taking tetracyclines. Patients apt to be exposed to direct sunlight or ultraviolet light should be advised that this reaction can occur with tetracycline drugs, and treatment should be discontinued at the first evidence of skin erythema.

While no overgrowth by opportunistic microorganisms such as yeast were noted during clinical studies, as with other antimicrobials, Periostat therapy may result in overgrowth of nonsusceptible microorganisms including fungi.

The use of tetracyclines may increase the incidence of vaginal candidiasis.

If superinfection is suspected, appropriate measures should be taken.

In long term therapy, periodic laboratory evaluations of organ systems, including hematopoietic, renal, and hepatic studies should be performed.

Because tetracyclines have been shown to depress plasma prothrombin activity, patients who are on anticoagulant therapy may require downward adjustment of their anticoagulant dosage.

Absorption of tetracyclines is impaired by antacids containing aluminum, calcium, or magnesium, and iron-containing preparations, and by bismuth subsalicylate.

Barbiturates, carbamazepine, and phenytoin decrease the half-life of doxycycline.

The concurrent use of tetracycline and methoxyflurane has been reported to result in fatal renal toxicity.

Concurrent use of tetracyclines may render oral contraceptives less effective.

False elevations of urinary catecholamine levels may occur due to interference with the fluorescence test.

Doxycycline hyclate was assessed for potential to induce carcinogenesis in a study in which the compound was administered to Sprague-Dawley rats by gavage at dosages of 20, 75, and 200 mg/kg/day for two years. An increased incidence of uterine polyps was observed in female rats that received 200 mg/kg/day, a dosage that resulted in a systemic exposure to doxycycline approximately nine times that observed in female humans that used Periostat (exposure comparison based upon AUC values). No impact upon tumor incidence was observed in male rats at 200 mg/kg/day, or in either gender at the other dosages studied. Evidence of oncogenic activity was obtained in studies with related compounds, i.e., oxytetracycline (adrenal and pituitary tumors), and minocycline (thyroid tumors).

Doxycycline hyclate demonstrated no potential to cause genetic toxicity in an in vitro point mutation study with mammalian cells (CHO/HGPRT forward mutation assay) or in an in vivo micronucleus assay conducted in CD-1 mice. However, data from an in vitro assay with CHO cells for potential to cause chromosomal aberrations suggest that doxycycline hyclate is a weak clastogen.

Oral administration of doxycycline hyclate to male and female Sprague-Dawley rats adversely affected fertility and reproductive performance, as evidenced by increased time for mating to occur, reduced sperm motility, velocity, and concentration, abnormal sperm morphology, and increased pre-and post-implantation losses. Doxycycline hyclate induced reproductive toxicity at all dosages that were examined in this study, as even the lowest dosage tested (50 mg/kg/day) induced a statistically significant reduction in sperm velocity. Note that 50 mg/kg/day is approximately 10 times the amount of doxycycline hyclate contained in the recommended daily dose of Periostat for a 60 kg human when compared on the basis of body surface area estimates (mg/m2). Although doxycycline impairs the fertility of rats when administered at sufficient dosage, the effect of Periostat on human fertility is unknown.

The effect of tetracyclines on labor and delivery is unknown.

Tetracyclines are excreted in human milk. Because of the potential for serious adverse reactions in nursing infants from doxycycline, the use of Periostat in nursing mothers is contraindicated. (See WARNINGS section).

The use of Periostat in infancy and childhood is contraindicated. (See WARNINGS section).

Adverse Reactions for Tetracyclines: The following adverse reactions have been observed in patients receiving tetracyclines:

Gastrointestinal: anorexia, nausea, vomiting, diarrhea, glossitis, dysphagia, enterocolitis, and inflammatory lesions (with vaginal candidiasis) in the anogenital region. Hepatotoxicity has been reported rarely. Rare instances of esophagitis and esophageal ulcerations have been reported in patients receiving the capsule forms of the drugs in the tetracycline class. Most of these patients took medications immediately before going to bed. (See DOSAGE AND ADMINISTRATION section).

Skin: maculopapular and erythematous rashes. Exfoliative dermatitis has been reported but is uncommon. Photosensitivity is discussed above. (See WARNINGS section).

Renal toxicity: Rise in BUN has been reported and is apparently dose related. (See WARNINGS section).

Blood: Hemolytic anemia, thrombocytopenia, neutropenia, and eosinophilia have been reported.

In case of overdosage, discontinue medication, treat symptomatically and institute supportive measures. Dialysis does not alter serum half-life and thus would not be of benefit in treating cases of overdose.

THE DOSAGE OF Periostat DIFFERS FROM THAT OF DOXYCYCLINE USED TO TREAT INFECTIONS. EXCEEDING THE RECOMMENDED DOSAGE MAY RESULT IN AN INCREASED INCIDENCE OF SIDE EFFECTS INCLUDING THE DEVELOPMENT OF RESISTANT MICROORGANISMS.

Periostat 20 mg twice daily as an adjunct following scaling and root planing may be administered for up to 9 months. Periostat should be taken twice daily at 12 hour intervals, usually in the morning and evening. It is recommended that if Periostat is taken close to meal times, allow at least one hour prior to or two hours after meals. Safety beyond 12 months and efficacy beyond 9 months have not been established.

Administration of adequate amounts of fluid along with the tablets is recommended to wash down the drug and reduce the risk of esophageal irritation and ulceration. (See ADVERSE REACTIONS section).

How is Periostat Supplied

Storage: All products are to be stored at controlled room temperatures of 15˚C - 30˚C (59˚F - 86˚F) and dispensed in tight, light-resistant containers (USP).

GALDERMA is a registered trademark. 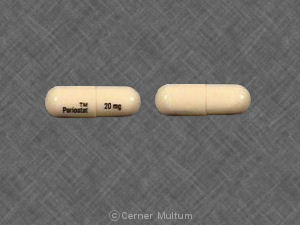