Prescribing Information as of 10/2020

Pentasa (mesalamine) for oral administration is an extended-release formulation of mesalamine, an aminosalicylate anti-inflammatory agent for gastrointestinal use.

Chemically, mesalamine is 5-amino-2-hydroxybenzoic acid. It has a molecular weight of 153.14.

The mechanism of action of mesalamine (and sulfasalazine) is not fully understood, but it appears to be a topical anti-inflammatory effect on colonic epithelial cells. Mucosal production of arachidonic acid (AA) metabolites, both through the cyclooxygenase pathways (i.e., prostanoids) and through the lipoxygenase pathways (i.e., leukotrienes (LTs)) and hydroxyeicosatetraenoic acids (HETEs), is increased in patients with ulcerative colitis, and it is possible that mesalamine diminishes inflammation by blocking cyclooxygenase and inhibiting prostaglandin (PG) production in the colon.

Pentasa is an ethylcellulose-coated, extended-release formulation of mesalamine designed to release therapeutic quantities of mesalamine throughout the gastrointestinal tract. Based on urinary excretion data, 20% to 30% of the mesalamine in Pentasa is absorbed. In contrast, when mesalamine is administered orally as an unformulated 1-g aqueous suspension, mesalamine is approximately 80% absorbed.

Plasma mesalamine concentration peaked at approximately 1 mcg/mL 3 hours following a 1-g Pentasa dose and declined in a biphasic manner. The literature describes a mean terminal half-life of 42 minutes for mesalamine following intravenous administration. Because of the continuous release and absorption of mesalamine from Pentasa throughout the gastrointestinal tract, the true elimination half-life cannot be determined after oral administration. N-acetyl-5-aminosalicylic acid, the major metabolite of mesalamine (5-aminosalicylic acid), peaked at approximately 3 hours at 1.8 mcg/mL, and its concentration followed a biphasic decline. Pharmacological activities of N-acetyl-5-aminosalicylic acid are unknown, and other metabolites have not been identified.

About 130 mg free mesalamine was recovered in the feces following a single 1-g Pentasa dose, which was comparable to the 140 mg of mesalamine recovered from the molar equivalent sulfasalazine tablet dose of 2.5 g. Elimination of free mesalamine and salicylates in feces increased proportionately with Pentasa dose. N-acetyl-5-aminosalicylic acid was the primary compound excreted in the urine (19% to 30%) following Pentasa dosing.

Indications and Usage for Pentasa

Pentasa is indicated for the induction of remission and for the treatment of adult patients with mildly to moderately active ulcerative colitis.

Pentasa is contraindicated in patients with known or suspected hypersensitivity to salicylates, aminosalicylates, or any components of this medication.

Renal impairment, including minimal change disease, acute and chronic interstitial nephritis, and renal failure have been reported in patients given Pentasa or other products that contain mesalamine or are converted to mesalamine.

Mesalamine is known to be substantially excreted by the kidney, and the risk of adverse reactions may be greater in patients with impaired renal function. Evaluate renal function in all patients prior to initiation and periodically while on therapy with Pentasa. Evaluate the risks and benefits of using Pentasa in patients with known renal impairment or a history of renal disease or taking concomitant nephrotoxic drugs.

Mesalamine has been associated with an acute intolerance syndrome that may be difficult to distinguish from a flare of inflammatory bowel disease. Symptoms include cramping, acute abdominal pain, bloody diarrhea, and sometimes fever, headache, and rash. Monitor patients for worsening of these symptoms while on treatment. If acute intolerance syndrome is suspected, promptly discontinue treatment with Pentasa.

Hypersensitivity reactions have been reported in patients taking sulfasalazine. Some patients may have a similar reaction to Pentasa or to other compounds that contain or are converted to mesalamine.

As with sulfasalazine, mesalamine-induced hypersensitivity reactions may present as internal organ involvement, including myocarditis, pericarditis, nephritis, hepatitis, pneumonitis, and hematologic abnormalities. Evaluate patients immediately if signs or symptoms of a hypersensitivity reaction are present. Discontinue Pentasa if an alternative etiology for the signs and symptoms cannot be established.

There have been reports of hepatic failure in patients with pre-existing liver disease who have been administered other products containing mesalamine. Evaluate the risks and benefits of using Pentasa in patients with known liver impairment.

Cases of nephrolithiasis have been reported with the use of mesalamine, including stones with 100% mesalamine content. Mesalamine-containing stones are radiotransparent and undetectable by standard radiography or computed tomography (CT). Ensure adequate hydration during treatment.

Use of mesalamine may lead to spuriously elevated test results when measuring urinary normetanephrine by liquid chromatography with electrochemical detection because of the similarity in the chromatograms of normetanephrine and mesalamine's main metabolite, N-acetyl-5-aminosalicylic acid (N-Ac-5-ASA). Consider an alternative, selective assay for normetanephrine.

No investigations of interactions between Pentasa and other drugs have been performed; however, the following drug-drug interactions have been reported for products containing mesalamine:

The concurrent use of mesalamine with known nephrotoxic agents, including non-steroidal anti-inflammatory drugs (NSAIDs), may increase the risk of nephrotoxicity. Monitor patients taking nephrotoxic drugs for changes in renal function and mesalamine-related adverse reactions.

The concurrent use of mesalamine with azathioprine or 6-mercaptopurine and/or any other drugs known to cause myelotoxicity may increase the risk for blood disorders, bone marrow failure, and associated complications. If concomitant use of Pentasa and azathioprine or 6-mercaptopurine cannot be avoided, monitor blood tests, including complete blood cell counts and platelet counts.

No evidence of mutagenicity was observed in an in vitro Ames test and in an in vivo mouse micronucleus test.

No effects on fertility or reproductive performance were observed in male or female rats at oral doses of mesalamine up to 400 mg/kg/day (0.8 times the recommended human dose based on body surface area).

Semen abnormalities and infertility in men, which have been reported in association with sulfasalazine, have not been seen with Pentasa capsules during controlled clinical trials.

Published data from meta-analyses, cohort studies, and case series on the use of mesalamine during pregnancy have not reliably informed an association with mesalamine and major birth defects, miscarriage, or adverse maternal or fetal outcomes. There is no clear evidence that mesalamine exposure in early pregnancy is associated with an increased risk of major congenital malformations, including cardiac malformations. Published epidemiologic studies have important methodological limitations which hinder interpretation of the data, including inability to control for confounders, such as underlying maternal disease, maternal use of concomitant medications, and missing information on the dose and duration of use for mesalamine products. Pentasa should only be used during pregnancy if the benefits outweigh the risks.

In animal reproduction studies, oral administration of mesalamine during organogenesis to pregnant rats at doses up to 1000 mg/kg/day (5900 mg/m²) and rabbits at doses of 800 mg/kg/day (6856 mg/m²) revealed no evidence of teratogenic effects or harm to the fetus due to mesalamine.

Data from published literature report the presence of mesalamine and its metabolite, N-acetyl-5-aminosalicylic acid in human milk in small amounts with relative infant doses (RID) of 0.1% or less for mesalamine. The clinical significance of this has not been determined and there is limited experience of nursing women using mesalamine.

There are reports of diarrhea observed in breastfed infants exposed to mesalamine. The effect of Pentasa on milk production is unknown. Exercise caution if Pentasa is administered to a nursing woman and monitor breastfed infants for diarrhea.

Safety and efficacy of Pentasa in pediatric patients have not been established.

Clinical trials of Pentasa did not include sufficient numbers of patients aged 65 years and over to determine whether they respond differently from younger patients. Reports from uncontrolled clinical studies and postmarketing reporting systems suggested a higher incidence of blood dyscrasias (i.e., agranulocytosis, neutropenia, and pancytopenia) in patients receiving mesalamine-containing products such as Pentasa who were 65 years or older compared to younger patients. Monitor complete blood cell counts and platelet counts in elderly patients during treatment with Pentasa.

In general, consider the greater frequency of decreased hepatic, renal, or cardiac function, and of concurrent disease or other drug therapy in elderly patients when prescribing Pentasa.

In two domestic placebo-controlled trials involving over 600 patients with ulcerative colitis, adverse events were fewer in Pentasa (mesalamine)-treated patients than in the placebo group (Pentasa 14% vs placebo 18%) and were not dose-related. Events occurring in more than 1% are shown in the table below. Of these, only nausea and vomiting were more frequent in the Pentasa group. Withdrawal from therapy due to adverse events was more common on placebo than Pentasa (7% vs 4%).

Clinical laboratory measurements showed no significant abnormal trends for any test, including measurement of hematological, liver, and kidney function.

The following adverse events, presented by body system, were reported infrequently (i.e., less than 1%) during domestic ulcerative colitis and Crohn's disease trials. In many cases, the relationship to Pentasa has not been established.

One week after completion of an 8-week ulcerative colitis study, a 72-year-old male, with no previous history of pulmonary problems, developed dyspnea. The patient was subsequently diagnosed with interstitial pulmonary fibrosis without eosinophilia by one physician and bronchiolitis obliterans with organizing pneumonitis by a second physician. A causal relationship between this event and mesalamine therapy has not been established.

The following events have been identified during post-approval use of the Pentasa brand of mesalamine in clinical practice. Because they are reported voluntarily from a population of unknown size, estimates of frequency cannot be made. These events have been chosen for inclusion due to a combination of seriousness, frequency of reporting, or potential causal connection to mesalamine:

Pentasa is an aminosalicylate, and symptoms of salicylate toxicity may be possible, such as: nausea, vomiting, abdominal pain, tachypnea, hyperpnea, tinnitus, and neurologic symptoms (headache, dizziness, confusion, seizures). Severe intoxication with salicylates may lead to electrolyte and blood pH imbalance and potentially to other organ (e.g., renal and liver) damage.

There is no specific antidote for mesalamine overdose; however, conventional therapy for salicylate toxicity may be beneficial in the event of acute overdosage and may include gastrointestinal tract decontamination to prevent further absorption. Correct fluid and electrolyte imbalance by the administration of appropriate intravenous therapy and maintain adequate renal function.

The recommended dosage for the induction of remission and the symptomatic treatment of mildly to moderately active ulcerative colitis in adults is 1 g (4 Pentasa 250-mg capsules or 2 Pentasa 500-mg capsules) 4 times a day for a total daily dosage of 4 g. Treatment duration in controlled trials was up to 8 weeks.

Drink an adequate amount of fluids.

Safety and efficacy of Pentasa in pediatric patients have not been established.

How is Pentasa Supplied 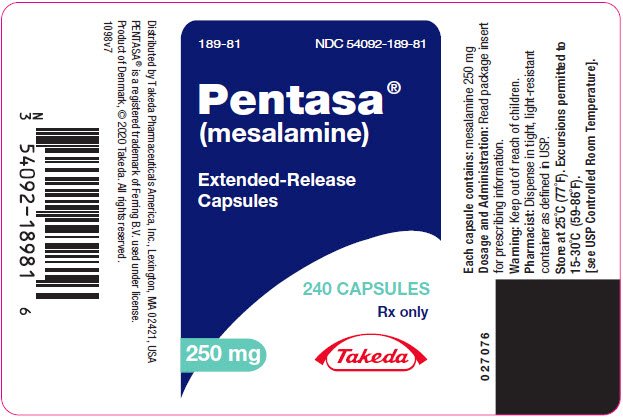 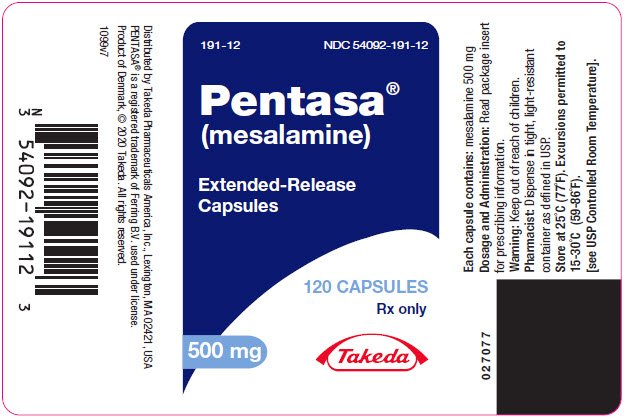 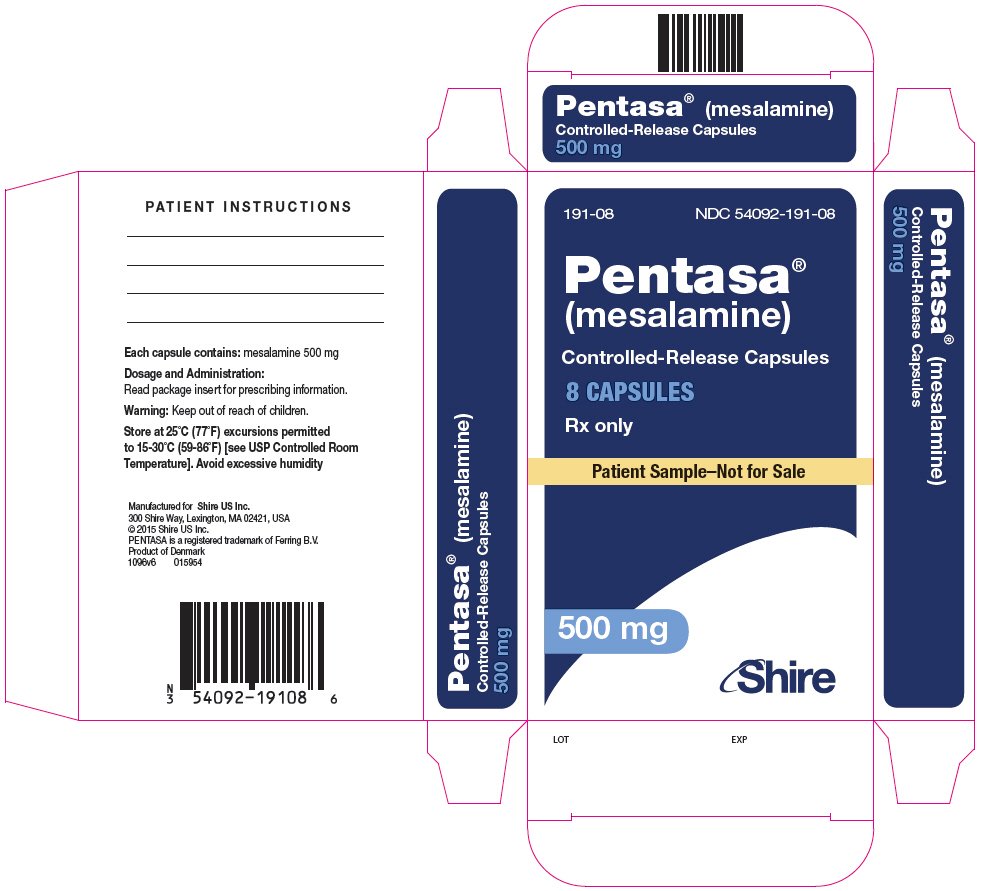