WARNING: PHYSICIANS SHOULD COMPLETELY FAMILIARIZE THEMSELVES WITHE THE COMPLETE CONTENTS OF THIS LEAFLET BEFORE PRESCRIBING NEO-SYNEPHRINE.

NEO-SYNEPHRINE hydrochloride, brand of phenylephrine hydrochloride injectino, is a vasoconstrictor and pressor drug chemically related to epinephrine and ephedrine.

NEO-SYNEPHRINE hydrochloride is a synthetic sympathomimetic agent in sterile form for parenteral injection. Chemically, phenylephrine hydrochloride is (-)-m-Hydroxy-a-[(methylamino)methyl]benzyl alcohol hydrochloride, and has the following structural formula:

NEO-SYNEPHRINE hydrochloride produces vasoconstriction that lasts longer than that of epinephrine and ephedrine. Responses are more sustained than those to epinephrine, lasting 20 minutes after intravenous and as long as 50 minutes after subcutaneous injection. Its action on the heart contrasts sharply with that of epinephrine and ephedrine, in that it slows the heart rate and increases the stroke output, producing no disturbance in the rhythm of the pulse.

Phenylephrine is a powerful postsynaptic alpha-receptor stimulant with little effect on the beta receptors of the heart. In therapeutic doses, it produces little if any stimulation of either the spinal cord or cerebrum. A singular advantage of this drug is the fact that repeated injections produce comparable effects.

The predominant actions of phenylephrine are on the cardiovascular system. Parenteral administration causes a rise in systolic and diastolic pressures in man and other species. Accompanying the pressor response to phenylephrine is a marked reflex bradycardia that can be blocked by atropine; after atropine, large doses of the drug increase the heart rate only slightly. In man, cardiac output is slightly decreased and peripheral resistance is considerably increased. Circulation time is slightly prolonged, and venous pressure is slightly increased; venous constriction is not marked. Most vascular beds are constricted; renal splanchnic, cutaneous and limb blood flows are reduced but coronary blood flow is increased. Pulmonary vessels are constricted, and pulmonary arterial pressure is raised.

The drug is a powerful vasoconstrictor with properties very similar to those of norepinephrine but almost completely lacking the chronotropic and inotropic actions on the heart. Cardiac irregularities are seen only very rarely even with large doses.

NEO-SYNEPHRINE is intended for the maintenance of an adequate level of blood pressure during spinal and inhalation anesthesia and for the treatment of vascular failure in shock, shock-like states and drug induced hypotension or hypersensitivity. It is also employed to overcome paroxysmal supraventricular tachycardia, to prolong spinal anesthesia and as a vasoconstrictor in regional analgesia.

NEO-SYNEPHRINE hydrochloride should not be used in patients with severe hypertension, ventricular tachycardia or in patients who are hypersensitive to it or to any of the components.

If used in conjunction with oxytocic drugs, the pressor effect of sympathomimetic pressor amines is potentiated (see Drug Interactions). The obstetrician should be warned that some oxytocic drugs may cause severe persistent hypertension and that even a rupture of a cerebral blood vessel may occur during the postpartum period.

Contains sodium metabisulfite, a sulfite that may cause allergic-type reactions including anaphylactic symptoms and life threatening or less severe asthmatic episodes in certain susceptible people. The overall prevalence of sulfite sensitivity in the general population is unknown and probably low. Sulfite sensitivity is seen more frequently in asthmatic than in nonasthmatic people.

NEO-SYNEPHRINE hydrochloride should be employed only with extreme caution in elderly patients or in patients with hyperthyroidism, bradycardia, partial heart block, myocardial disease or severe arteriosclerosis.

Drug Interactions
Vasopressors, particularly metaraminol, may cause serious cardiac arrhythmias during halothane anesthesia and therefore should be used only with great caution or not at all.

MAO Inhibitors
The pressor effect of sympathomimetic pressor amines is markedly potentiated in patients receiving monoamine oxidase inhibitors (MAOI). Therefore, when initiating pressor therapy in these patients, the initial dose should be small and used with due caution. The pressor response of adrenergic agents may also be potentiated by tricyclic antidepressants.

Carcinogenesis, Mutagenesis, Impairment of Fertility
No long-term animal studies have been done to evaluate the potential of phenylephrine in these areas.

Labor and Delivery
If vasopressor drugs are either used to correct hypotension or added to the local anesthetic solution, the obstetrician should be cautioned that some oxytocic drugs may cause severe persistent hypertension and that even a rupture of a cerebral blood vessel may occur during the postpartum period (see WARNINGS).

Pediatric Use
To combat hypotension during spinal anesthesia in children, a dose of 0.5 mg to 1 mg per 25 pounds of body weight, administered subcutaneously or intramuscularly, is recommended.

Overdosage may induce ventricular extrasystole and short paroxysms of ventricular tachycardia, a sensation of fullness in the head and tingling of the extremities.

Should an excessive elevation of blood pressure occur, it may be immediately relieved by an a-adrenergic blocking agent (e.g. phentolamine).

NEO-SYNEPHRINE is generally injected subcutaneously, intramuscularly, slowly intravenously or in dilute solution as a continuous intravenous infusion. In patients with paroxysmal supraventricular tachycardia and, if indicated, in case of emergency, Phenylephrine Hydrochloride Injection is administered directly intravenously. The dose should be adjusted according to the pressor response.

Severe Hypotension and Shock - Including Drug-Related Hypotension
Blood volume depletion should always be corrected as fully as possible before any vasopressor is administered. When, as an emergency measure, intraaortic pressures must be maintained to prevent cerebral or coronary artery ischemia, NEO-SYNEPHRINE can be administered before and concurrently with blood volume replacement.

Hypotension and occasionally severe shock may result from overdosage or idiosyncrasy following the administration of certain drugs, especially adrenergic and ganglionic blocking agents, rauwolfia and veratrum alkaloids and phenothiazines tranquilizers. Patients who receive a phenothiazine derivative as preoperative medication are especially susceptible to these reactions. As an adjunct in the management of such episodes, Neo-Synephrine Injection is a suitable agent for restoring blood pressure.

Spinal Anesthesia-Hypotension
Routine parenteral use of NEO-SYNEPHRINEhas been recommended for the prophylaxis and treatment of hypotension during spinal anesthesia. It is best administered subcutaneously or intramuscularly three or four minutes before injection of the spinal anesthetic. The total requirement for high anesthetic levels is usually 3 mg, and for lower levels, 2 mg. For hypotensive emergencies during spinal anesthesia, NEO-SYNEPHRINE may be injected intravenously, using an initial dose of 0.2 mg. Any subsequent dose should not exceed the previous dose by more than 0.1 mg to 0.2 mg and no more than 0.5 mg should be administered in a single dose. To combat hypotension during spinal anesthesia in children, a dose of 0.5 mg to 1 mg per 25 pounds body weight, administered subcutaneously or intramuscularly, is recommended.

Prolongation of Spinal Anesthesia
The addition of 2 mg to 5 mg of NEO-SYNEPHRINE to the anesthetic solution increases the duration of motor block by as much as approximately 50 percent without any increase in the incidence of complications such as nausea, vomiting or blood pressure disturbances.

Vasoconstrictor for Regional Analgesia
Concentrations about ten times those employed when epinephrine is used as a vasoconstrictor are recommended. The optimum strength is 1:20,000 (made by adding 1 mg of NEO-SYNEPHRINE to every 20 mL of local anesthetic solution). Some pressor responses can be expected when 2 mg or more are injected.

Paroxysmal Supraventricular Tachycardia
Rapid intravenous injection (within 20 to 30 seconds) is recommended. The initial dose should not exceed 0.5 mg, and subsequent doses, which are determined by the initial blood pressure response, should not exceed the preceding dose by more than 0.1 mg to 0.2 mg and should never exceed 1 mg. Parenteral drug products should be inspected visually for particulate matter and discoloration prior to administration, whenever solution and container permit.

The air in all ampuls and Cartridge Units has been displaced by nitrogen gas.

Protect from light if removed from carton or dispensing bin. 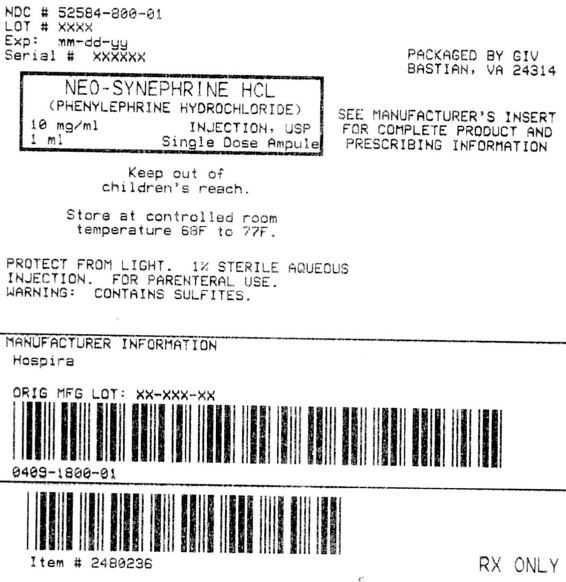