Indications and Usage for Biorphen

Biorphen is indicated for the treatment of clinically important hypotension resulting primarily from vasodilation in the setting of anesthesia.

Parenteral drug products should be inspected visually for particulate matter and discoloration prior to administration. Do not use if the solution is colored or cloudy, or if it contains particulate matter. Discard any unused portion.

Biorphen 0.1 mg/mL injection MUST NOT BE DILUTED before administration as an intravenous bolus. It is supplied as READY-TO-USE formulation.

Biorphen 10 mg/mL injection MUST BE DILUTED before administration as an intravenous bolus or continuous intravenous infusion to achieve the desired concentration:

The diluted solution should not be held for more than 4 hours at room temperature or for more than 24 hours under refrigerated conditions.

Dosing for Treatment of Hypotension during Anesthesia

The following are the recommended dosages for the treatment of hypotension during anesthesia.

Biorphen 10 mg/mL Injection:
• The recommended initial dose is 40 mcg to 100 mcg administered by intravenous bolus. Additional boluses up to 200 mcg may be administered every 1 to 2 minutes as needed.
• If blood pressure is below the target goal, start a continuous intravenous infusion with an infusion rate of 10 mcg/minute to 35 mcg/minute; not to exceed 200 mcg/minute.
• Adjust dosage according to the blood pressure goal.

2.3 Preparation of a 100 mcg/mL Solution for Bolus Intravenous Administration from Biorphen 10 mg/mL Injection

Because of its increasing blood pressure effects, Biorphen can precipitate angina in patients with severe arteriosclerosis or history of angina, exacerbate underlying heart failure, and increase pulmonary arterial pressure.

Biorphen can cause excessive peripheral and visceral vasoconstriction and ischemia to vital organs, particularly in patients with extensive peripheral vascular disease.

Extravasation of Biorphen can cause necrosis or sloughing of tissue. Avoid extravasation by checking infusion site for free flow.

Biorphen can cause severe bradycardia and decreased cardiac output.

Risk of Augmented Pressor Affect in Patients with Autonomic Dysfunction

The increasing blood pressure response to adrenergic drugs, including Biorphen, can be increased in patients with autonomic dysfunction, as may occur with spinal cord injuries.

Adverse reactions to Biorphen are primarily attributable to excessive pharmacologic activity. Adverse reactions reported in published clinical studies, observational trials, and case reports of Biorphen are listed below by body system. Because these reactions are reported voluntarily from a population of uncertain size, it is not always possible to estimate their frequency reliably or to establish a causal relationship to drug exposure.

The increasing blood pressure effect of Biorphen is increased in patients receiving:

Interactions that Antagonize the Pressor Effect

The increasing blood pressure effect of Biorphen is decreased in patients receiving:

Data from randomized controlled trials and meta-analyses with phenylephrine hydrochloride injection use in pregnant women during caesarean section have not established a drug-associated risk of major birth defects and miscarriage. These studies have not identified an adverse effect on maternal outcomes or infant Apgar scores [see Data]. There are no data on the use of phenylephrine during the first or second trimester. In animal reproduction and development studies in normotensive animals, evidence of fetal malformations was noted when phenylephrine was administered during organogenesis via a 1-hour infusion at 1.2 times the human daily dose (HDD) of 10 mg/60 kg/day. Decreased pup weights were noted in offspring of pregnant rats treated with 2.9 times the HDD [See Data].

Published randomized controlled trials over several decades, which compared the use of phenylephrine injection to other similar agents in pregnant women during cesarean section, have not identified adverse maternal or infant outcomes. At recommended doses, phenylephrine does not appear to affect fetal heart rate or fetal heart variability to a significant degree.

No clear malformations or fetal toxicity were reported when normotensive pregnant rabbits were treated with phenylephrine via continuous intravenous infusion over 1 hour (0.5 mg/kg/day; approximately equivalent to a HDD based on body surface area) from Gestation Day 7 to 19. At this dose, which demonstrated no maternal toxicity, there was evidence of developmental delay (altered ossification of sternebra).

In a non-GLP dose range-finding study in normotensive pregnant rabbits, fetal lethality and cranial, paw, and limb malformations were noted following treatment with 1.2 mg/kg/day of phenylephrine via continuous intravenous infusion over 1 hour (2.3-times the HDD). This dose was clearly maternally toxic (increased mortality and significant body weight loss). An increase in the incidence of limb malformation (hyperextension of the forepaw) coincident with high fetal mortality was noted in a single litter at 0.6 mg/kg/day (1.2-times the HDD) in the absence of maternal toxicity.

No malformations or embryo-fetal toxicity were reported when normotensive pregnant rats were treated with up to 3 mg/kg/day phenylephrine via continuous intravenous infusion over 1 hour (2.9-times the HDD) from Gestation Day 6 to 17. This dose was associated with some maternal toxicity (decreased food consumption and body weights).

Decreased pup weights were reported in a pre- and postnatal development toxicity study in which normotensive pregnant rats were administered phenylephrine via continuous intravenous infusion over 1 hour (0.3, 1.0, or 3.0 mg/kg/day; 0.29, 1, or 2.9 times the HDD) from Gestation Day 6 through Lactation Day 21). No adverse effects on growth and development (learning and memory, sexual development, and fertility) were noted in the offspring of pregnant rats at any dose tested. Maternal toxicities (mortality late in gestation and during lactation period, decreased food consumption and body weight) occurred at 1 and 3 mg/kg/day of phenylephrine (equivalent to and 2.9 times the HDD, respectively).

Clinical studies of phenylephrine did not include sufficient numbers of subjects aged 65 and over to determine whether they respond differently from younger subjects. Other reported clinical experience has not identified differences in responses between the elderly and younger patients. In general, dose selection for an elderly patient should be cautious, usually starting at the low end of the dosing range, reflecting the greater frequency of decreased hepatic, renal, or cardiac function, and of concomitant disease or other drug therapy.

In patients with liver cirrhosis [Child Pugh Class B and Class C], dose-response data indicate decreased responsiveness to phenylephrine. Start dosing in the recommended dose range but more phenylephrine may be needed in this population.

In patients with end stage renal disease (ESRD), dose-response data indicate increased responsiveness to phenylephrine. Consider starting at the lower end of the recommended dose range, and adjusting dose based on the target blood pressure goal.

Overdose of Biorphen (phenylephrine hydrochloride) can cause a rapid rise in blood pressure. Symptoms of overdose include headache, vomiting, hypertension, reflex bradycardia, a sensation of fullness in the head, tingling of the extremities, and cardiac arrhythmias including ventricular extrasystoles and ventricular tachycardia.

Phenylephrine hydrochloride is soluble in water and ethanol, and insoluble in chloroform and ethyl ether.

Biorphen (phenylephrine hydrochloride) injection, 0.1 mg/mL, is a sterile, nonpyrogenic, clear and colorless solution for intravenous use. It MUST NOT BE DILUTED before administration as an intravenous bolus.

Each mL contains: phenylephrine hydrochloride 0.1 mg (equivalent to 0.08 mg of phenylephrine base), sodium chloride 9.0 mg in water for injection. The pH is adjusted with hydrochloric acid if necessary. The pH range is 3.0 to 5.0.

Biorphen (phenylephrine hydrochloride) injection, 10 mg/mL, is a sterile, nonpyrogenic, clear and colorless solution for intravenous use. It MUST BE DILUTED before administration as an intravenous bolus or continuous intravenous infusion.

Each mL contains: phenylephrine hydrochloride 10 mg (equivalent to 8.2 mg of phenylephrine base), sodium chloride 6.0 mg in water for injection. The pH is adjusted with hydrochloric acid if necessary. The pH range is 3.0 to 5.0.

Carcinogenesis: Long-term animal studies that evaluated the carcinogenic potential of orally administered phenylephrine hydrochloride in F344/N rats and B6C3F1 mice were completed by the National Toxicology Program using the dietary route of administration. There was no evidence of carcinogenicity in mice administered approximately 270 mg/kg/day (131 times the human daily dose (HDD) of 10 mg/60 kg/day based on body surface area) or rats administered approximately 50 mg/kg/day (48 times the HDD).

Mutagenesis: Phenylephrine hydrochloride tested negative in the in vitro bacterial reverse mutation assay (S. typhimurium strains TA98, TA100, TA1535 and TA1537), the in vitro chromosomal aberrations assay, the in vitro sister chromatid exchange assay, and the in vivo rat micronucleus assay. Positive results were reported in only one of two replicates of the in vitro mouse lymphoma assay.

Impairment of Fertility: Phenylephrine did not impair mating, fertility, or reproductive outcome in normotensive male rats treated with 3 mg/kg/day phenylephrine via continuous intravenous infusion over 1 hour (2.9 times the HDD) for 28 days prior to mating and for a minimum of 63 days prior to sacrifice and female rats treated with the same dosing regimen for 14 days prior to mating and through Gestation Day 6. This dose was associated with increased mortality in both male and female rats and decreased body weight gain in treated males. There were decreased caudal sperm density and increased abnormal sperm reported in males treated with 3 mg/kg/day phenylephrine (2.9 times the HDD).

The evidence for the efficacy of Biorphen, is derived from studies of phenylephrine hydrochloride in the published literature. The literature support includes 16 studies evaluating the use of intravenous phenylephrine to treat hypotension during anesthesia. The 16 studies include 9 studies where phenylephrine was used in low-risk (ASA 1 and 2) pregnant women undergoing neuraxial anesthesia during Cesarean delivery, 6 studies in non-obstetric surgery under general anesthesia, and 1 study in non-obstetric surgery under combined general and neuraxial anesthesia. Phenylephrine has been shown to raise systolic and mean blood pressure when administered either as a bolus dose or by continuous infusion following the development of hypotension during anesthesia.

If applicable, inform patient, family member, or caregiver that certain medical conditions and medications might influence how Biorphen injection works. 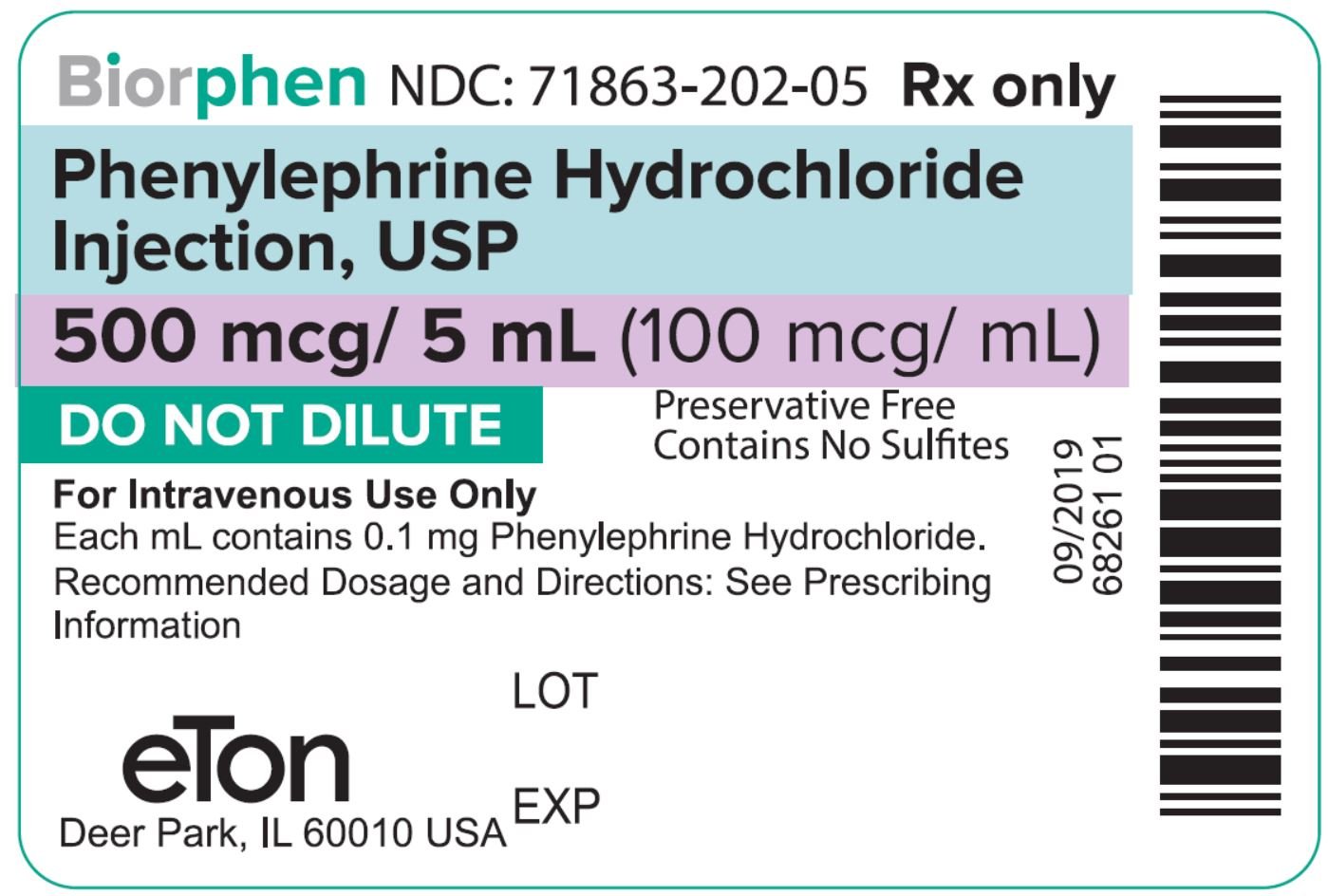 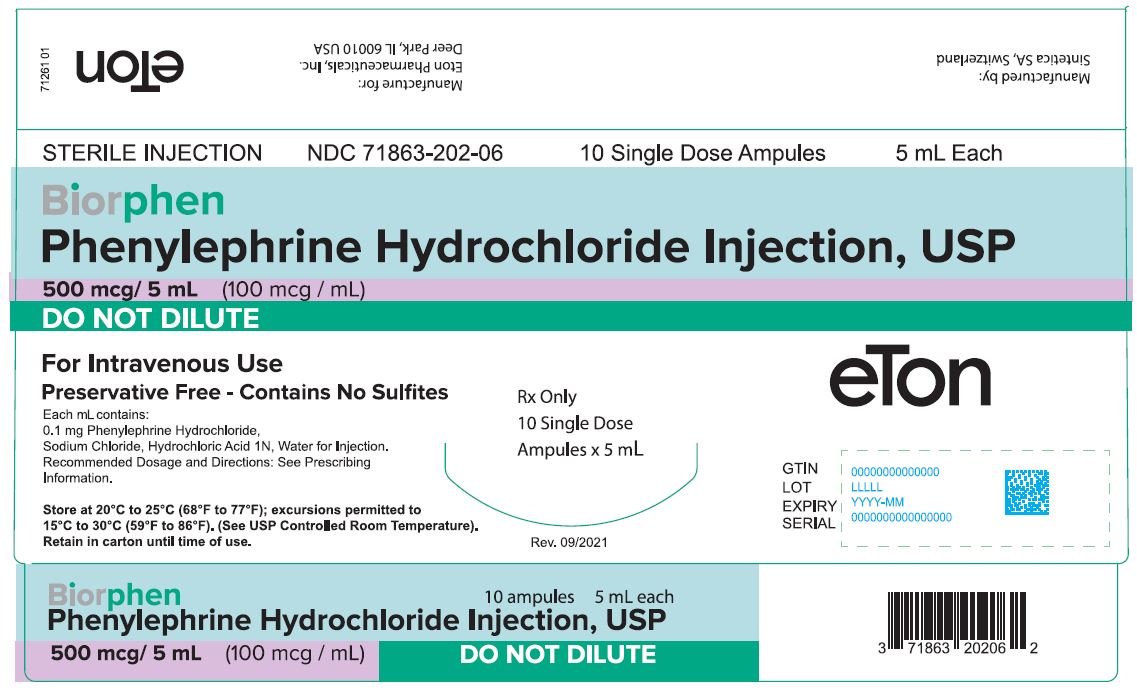 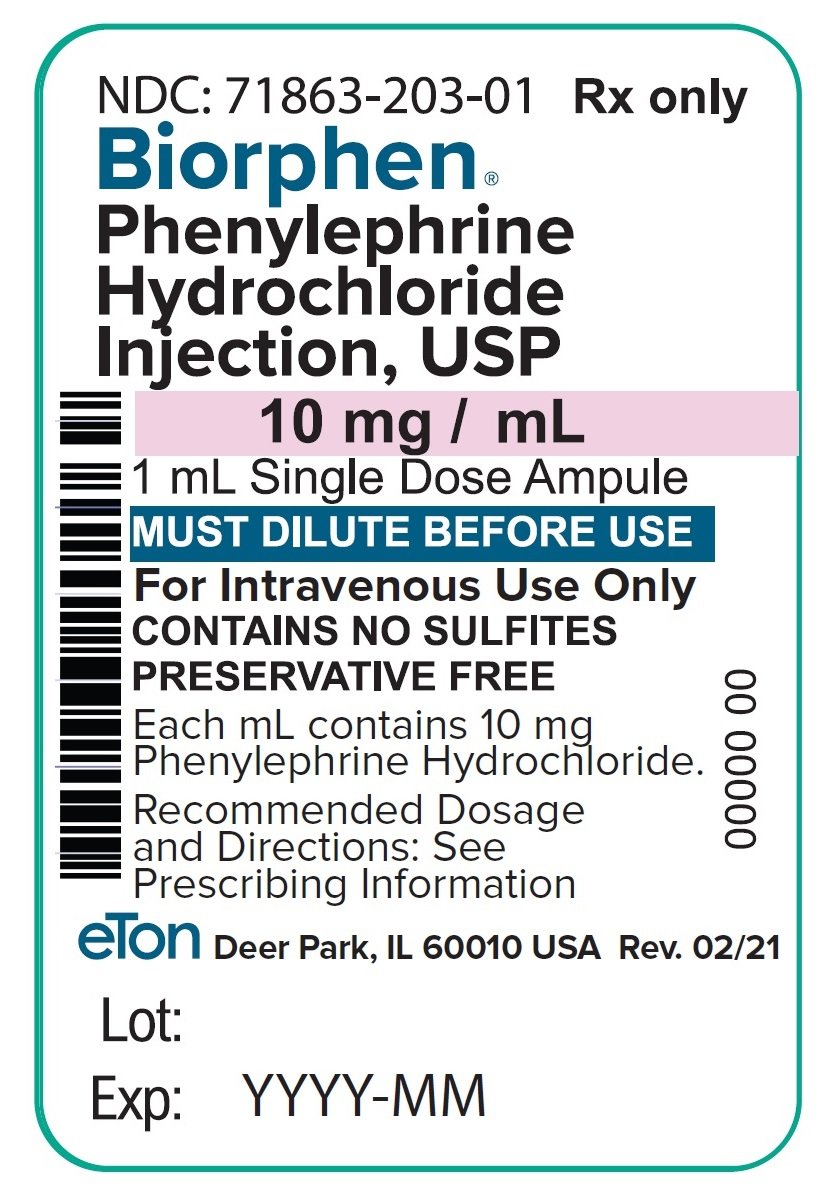 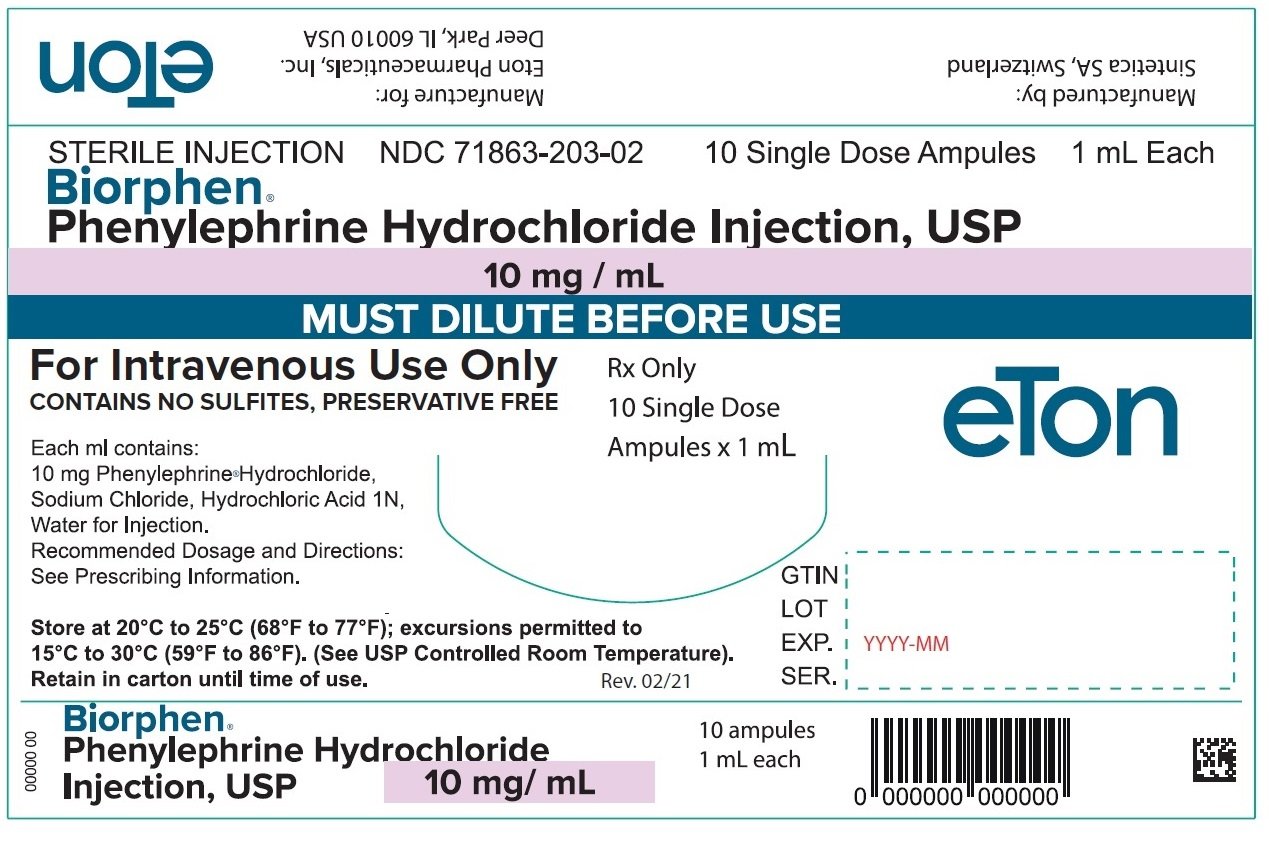