Metronidazole is an imidazole and is classified therapeutically as an antiprotozoal and antibacterial agent. Chemically, metronidazole is 2-methyl-5-nitro-1H-imidazole-1-ethanol. The molecular formula is C6H9N3O3 and molecular weight is 171.16. Metronidazole is represented by the following structural formula: 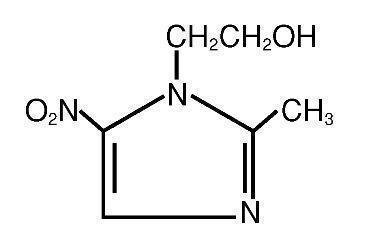 Indications and Usage for Metronidazole Lotion

Metronidazole Topical Lotion is indicated for topical application in the treatment of inflammatory papules and pustules of rosacea.

A controlled clinical study was conducted in 144 patients with moderate to severe rosacea, in which Metronidazole Topical Lotion was compared with its vehicle. Applications were made twice daily for 12 weeks during which patients were instructed to avoid spicy foods, thermally hot foods and drinks, alcoholic beverages, and caffeine. Patients were also provided samples of a soapless cleansing lotion and, if requested, a moisturizer. Metronidazole Topical Lotion was significantly more effective than its vehicle in mean percent reduction of inflammatory lesions associated with rosacea and in the investigators' global assessment of improvement. The results of the mean percent reduction in inflammatory lesion counts from baseline after 12 weeks of treatment and the investigators' global assessment of improvement at week 12 are presented in the following table:

The scale is based on the following definitions:

Worse: Exacerbation of either erythema or quantitative assessment of papules and/or pustules.

No Change: Condition remains the same.

Clear: No papules or pustules and minimal residual or no erythema.

Metronidazole Topical Lotion is contraindicated in individuals with a history of hypersensitivity to metronidazole or to other ingredients of the formulation.

Topical metronidazole formulations have been reported to cause tearing of the eyes. Therefore, contact with the eyes should be avoided. If a reaction suggesting local irritation occurs, patients should be directed to use the medication less frequently or discontinue use. Metronidazole is a nitroimidazole and should be used with care in patients with evidence or history of blood dyscrasia.

1. This medication is to be used only as directed by the physician.
2. It is for external use only.
3. Avoid contact with the eyes.
4. Cleanse affected area(s) before applying this medication.
5. Patients should report any adverse reaction to their physician.

Ultraviolet radiation-induced carcinogenesis was enhanced in albino mice by intraperitoneal injection of metronidazole at a dosage of 45 mg/m2/day, 5 days per week for 10 weeks, as indicated by a decreased latency period to the development of skin neoplasms. It is unclear how this level of exposure compares to the clinical situation with respect to the concentration of the drug or metabolics in the skin. This study did not determine if metronidazole must be present during exposure to ultraviolet radiation in order to enhance tumor formation; metronidazole may promote tumor formation in cells that have previously been initiated by ultraviolet radiation.

Metronidazole exhibited mutagenic activity in several in vitro bacterial and mammalian assay systems. Intraperitoneal administration of metronidazole to mice resulted in a dosage-dependent increase in the incidence of chromosomal aberrations in peripheral lymphocytes was reported in patients with Crohn’s disease who were treated with metronidazole for 1 to 24 months at a dosage of 200 to 1200 mg/day. However, similar results were not observed in another study, in which humans were treated for 8 months.

In rats, oral metronidazole at a dosage of approximately 1800 mg/m2/day (approximately 200 times the exposure of a patient that received the estimated maximum human topical daily dose (assuming 100% bioavailability and following normalization of the data on the basis of body surface area)) induced inhibition of spermatogenesis and severe testicular degeneration.

Teratogenic Effects: Pregnancy Category B: There are no adequate and well-controlled studies with the use of Metronidazole Topical Lotion in pregnant women. Metronidazole crosses the placental barrier and enters the fetal circulation rapidly. No fetotoxicity was observed after oral administration of metronidazole in rats or mice. However, because animal reproduction studies are not always predictive of human response and since oral metronidazole has been shown to be a carcinogen in some rodents, this drug should be used during pregnancy only if clearly needed.

The following additional adverse experiences have been reported with the topical use of metronidazole: skin irritation, transient redness, metallic taste, tingling or numbness of extremities, and nausea.

Apply a thin layer to entire affected areas after washing. Use morning and evening or as directed by physician. Avoid application close to the eyes. Patients may use cosmetics after waiting for the MetronidazoleTopical Lotion to dry (not less than 5 minutes).

How is Metronidazole Lotion Supplied 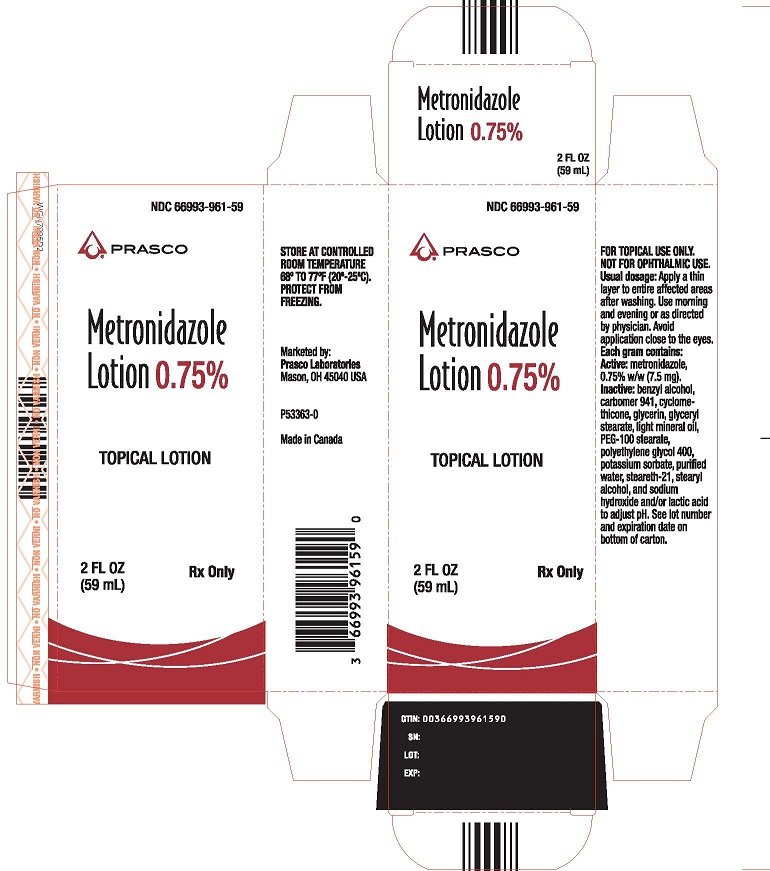 FOR TOPICAL USE ONLY. NOT FOR OPHTHALMIC USE.

Usual Dosage: Apply a thin layer to entire affected areas after washing. Use morning and evening or as directed by physician. Avoid application close to the eyes.

See lot number and expiration date on bottom of carton.